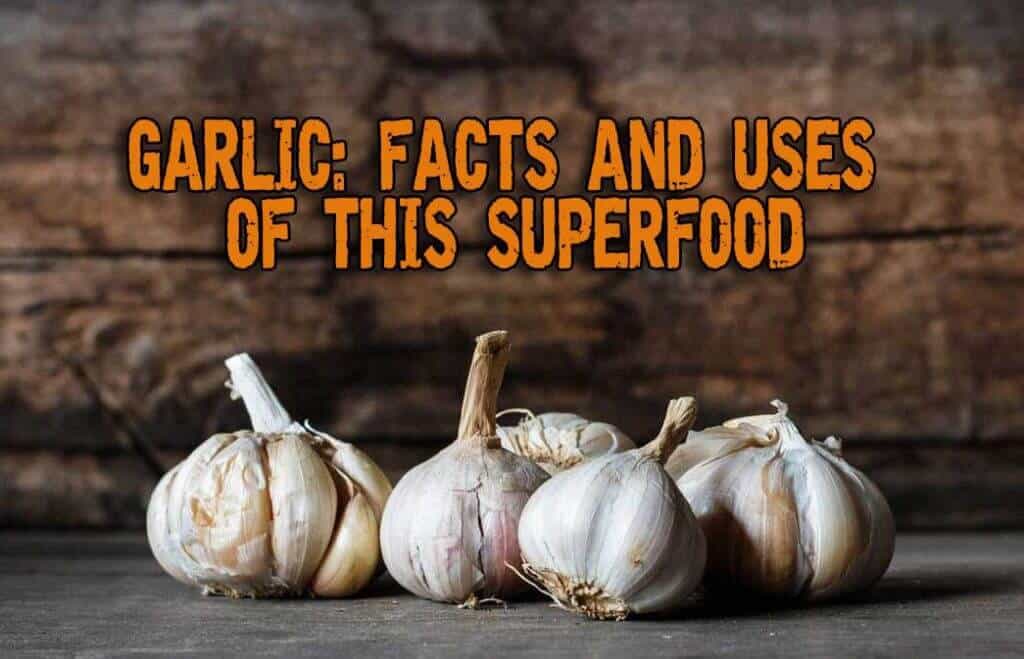 Vampires, cancer, and your neighbors (that is if you breath on them), all have a single common denominator: Garlic combats against them all. Garlic is one of the earliest attested pants to be made useful by humans. It has been used as a treatment for illnesses as well as to maintain health.

There are ancient medical texts from China, Egypt, India and Greece that indicate the medicinal use of garlic. References to garlic can even be found in the Bible, in Jewish teachings and in the Quran.

In the early days, garlic was, of course, a wild plant (which has slowly developed into the domesticated version that is so prevalent today). It truly proved to be worth its weight in gold. Around 3000 BC, travelers from India introduced garlic to the Assyrian Empire as well as the Babylonians. Once it began spreading, it didn’t cease. It became well known for its uses in food and seasoning, religious ingredients, as well as medical ingredients.

Funny enough, garlic is typically described as an herb or spice. This, however, is untrue. Garlic grows beneath the surface of the ground in a bulb, sprouting long green shoots to the heavens. It would be precise to call garlic a vegetable, as it belongs to the allium family (along with leeks and onions). Makes sense, right?

Garlic is most commonly applied as a flavoring agent. However, it can also be ingested as a vegetable. It has been used to flavor many foods, including, but not limited to, marinades, sauces, meats, stews, vegetables, salad dressings, etc. It is used to make garlic butter and garlic toast.

Garlic is highly nutritious but has very few calories. A 1 ounce serving of garlic contains, manganese, vitamin B6, vitamin B1, vitamin C, calcium, copper, potassium, phosphorus, iron, also contains trace amounts of various other nutrients. This includes 42 cal, with 1.8 g of protein and 9 g of carbs.

Whether using the bulbs or the leaves, garlic is a wonderful addition to your culinary uses.

As seen above, and more than likely in your kitchen, garlic is one of the essential culinary herbs that exists. On top of that rad fact, it is also proven to be a complete health tonic. Much like the apple, a clove or two of garlic a day can keep the doctor at bay (and vampire, and pesky bugs, and…well you get the idea).

This superfood produces a chemical called allicin. It is this chemical that makes garlic help treat certain conditions. It is also the reason garlic smells the way it does, along with its other sulfur-containing compounds that have health-advancing effects.

The medical uses for garlic are so plethoric that it would be impossible to name them all here in this article. Garlic has been used for nearly every malady of the human body. From athletes foot to cancer, garlic has been used to treat nearly any ailment you can conjure up.

Some drawbacks may occur with the medicinal use of garlic. It can irritate the stomach, sometimes even causing digestion problems. Garlic may also increase the risk of bleeding. Though garlic has been known to help lower blood pressure, people using prescription medication should use caution. Some people may even be quite sensitive to garlic on their skin.

More powerful than penicillin, garlic has the ability to destroy many types of bacteria; so many, in fact, that it has been called an “anti-bacterial, antifungal, anti-parasitic, anti-protozoan, and anti-viral.

Other studies have confirmed garlic effects for more than 160 various diseases. Its advantages can be categorized into four common categories:

Those who consume large amounts of garlic appear to have a lower risk of stomach and colorectal cancers. One particular study showed that people who had inoperable forms of liver, pancreatic, or colorectal cancer, by taking the extract of aged garlic for around six months, had improved their immune function (indicating that it may be beneficial to your immune system during any time of stress or illness.

A compound found in garlic, called diallyl sulfide, has been proven to restrain the creation of HCA’s (carcinogenic heterocyclic amines, which form when meat is cooked at high temperatures). This means that by adding some chopped or minced garlic to your meats before cooking can help you to cut down on cooking byproducts that may be cancer causing.

For centuries now, garlic has been well known for its antibacterial and antiviral qualities as well as its ability to fight yeast, fungal, and worm infections. In some cases, the combination of biochemicals found in garlic was stronger against superbugs than many antibiotics.

Consuming garlic can also help your body and immune system to fight off inflammations from colds and flu. For those who consume garlic daily, they are found to have fewer colds, and when having a cold, experiencing lessened symptoms as well as a shortened duration.

Antioxidants, Vitamins, and Minerals for a Potent Health Elixir

Garlic, being a natural super-food, offers great benefits to your body in a multitude of ways. It is rich in manganese, calcium, phosphorus, selenium, and vitamins B6 and C. This means it is good for your bones, your thyroid, and everything in between.

Garlic can be used to assist in the prevention of heart disease, atherosclerosis or even the hardening of arteries, high cholesterol, high blood pressure, boosting the immune system. It is also extremely rich in antioxidants.

Free radicals begin to build up in your body as you grow older; these may wind up contributing to heart disease, cancer, and Alzheimer’s. Garlic, being rich in certain antioxidants, can reduce and even assist in preventing some of the damage caused by free radicals.

Much like the eyes of a potato, a head of garlic that has been on the counter too long will sprout green shoots. Unlike the potato that has sprouted and may be a danger to your health, garlic is of a different case. You don’t need to throw it to the compost or trash. It has been found that sprouted garlic is not only harmless to consume, but it may be more healthy than plain ole non-sprouted garlic.

Sprouted garlic has been found to have higher antioxidants and different sorts of metabolites.

Black garlic is procured from fresh garlic that has been fermented at a controlled high temperature for some time. In comparison to fresh garlic, black garlic does not give off that stout, offensive “garlic flavor” since it has a lessened allicin content.

In certain mythologies, black garlic has been rumored to grant the special consumer with immortality. While this may be a stretch of the truth (at least as we see it), black garlic can help to add years to your life!

Certain compounds found in black garlic, such as S-Allycysteine that prevents cancers and reduces tumor size inhibits cholesterol synthesis, among much other health benefits. It also seems that black garlic practically doubles in antioxidants.

Woefully, the process for fermenting garlic is a lengthy one that requires a controlled environment. The time it takes to have ready-to-eat black garlic is about a month. And while it can be rather difficult to gather all the required tools for fermenting, you can find already fermented black garlic from trustworthy online sources.

Garlic can be grown year-round in a pot right on your windowsill in your kitchen. The best time to plant your garlic outside is a day or so after Thanksgiving. Cover the bed with some heavy mulch, and I can promise you that by late spring you will see long, beautiful green sprouts promising and hinting at that beautiful garlic smell.

Research shows that it may be wise to include much raw garlic in your diet. Just remember that a fresh clove must be crushed, chopped or minced in order to rouse the release of alliinase (which catalyzes the formation of allicin). That allicin then breaks down into a number of organic, sulfur-compounds.

Simply compress, crush, or chop a fresh garlic clove and add it to your cooking meat, a salad, or even throw it in the juicer with your veggies and give a nice tasty twist to your afternoon juice!

It seems, especially in today’s time, that most people are simply unaware of the wealth of nutrients that are readily accessible in organic fruits, veggies and spices. Just by getting to know more about the food you take in you can make wiser decisions about eating healthy and boosting your brain function and immune system, lower the risks of chronic disease, lose weight, etc.

The practice of using spices as alternative medicines can do so much for the human race. Among the benefits (health being the most obvious), studies show that use of herbs, spices and superfoods can and will reduce the clinical burden of drug resistance development (meaning that there will be less synthetic drug addiction problems to tackle). Not only that, but it will also reduce the side effects and especially the cost of the treatment with allopathic medications.

Yes, if I could grow but one plant, it would be garlic. The flavor, the culinary uses, and the medical benefits outweigh that of any other plant that I know of.