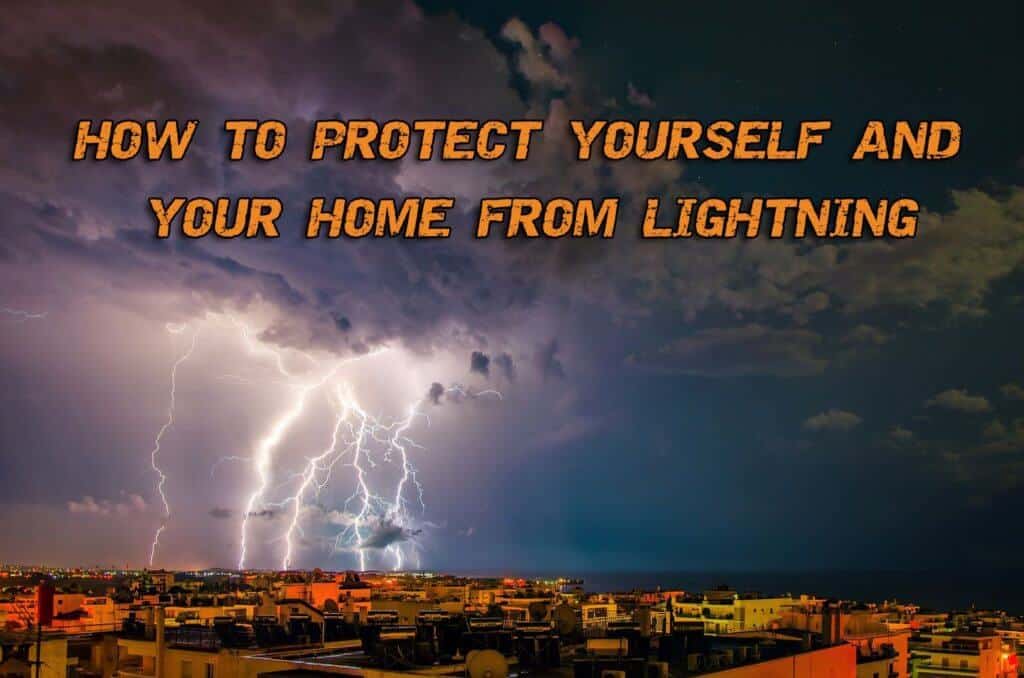 Of all the displays of nature’s raw power, one of the most beautiful and the most deadly is lightning. Lightning is nature’s own fireworks show. It accounts for an average of 200 deaths and more than 1,000 injuries in the U.S. each year. How can you minimize the chances that you or your property will fall victim to lightning damage?

In an average year, more people in the U.S. are killed by lightning than by floods, hurricanes, and tornadoes combined. The insurance industry estimates that lightning accounts for more than 100 million in property damage each year.

How can you protect yourself or your property from lightning damage?

The first step is to understand what lightning is and the mechanism by which it can damage both people and property. Lightning is a spark caused by the discharge of an accumulated electric charge within a cloud. The discharge may take place within a single cloud, from one cloud to another, or from the ground to a cloud. Very rarely, lightning may occur in clear skies. It was probably this type of lightning which gave rise to the expression “bolt out of the blue.”

How does lightning occur?

Contents hide
1 How does lightning occur?
1.1 Related article: Predict The Weather Using The Clouds
2 Protecting yourself from lightning
3 Chances of being hit by lightning
4 Side-flash
5 Protection Steps
5.1 What to do indoors
6 Protecting A Home from lighting
6.1 Recommended article: Your Daily Life With And Without Power
7 Lightning survivors
8 Calm Action
8.1 Other Useful Resources:

One current theory holds that precipitation within a thundercloud carries the heavier and mostly negatively charged particles such as raindrops, downward, while the violent winds and updrafts within the cloud carry the lighter, positively charged ice crystals and cloud droplets upward, thus separating the cloud into two polarized regions.

Since air stands between the charges meeting, and the air is a very poor electrical conductor, the positive earth charge seeks an object which it can climb to lessen the amount of air through which it must travel. The object may be a person, tree, building, etc.

The return stroke superheats the air (until it glows) along the ionized channel to the cloud. That glowing superheated air is the lightning stroke which we see. Thunder, which often accompanies a lightning strike, is the result of the very rapid superheating of the air in the ionized lightning channel.

Contrary to what our eyes tell us, a lightning stroke almost always flows from ground to cloud, not the other way around. All of this takes place in millionths of a second, and the amount of energy released in that short time is phenomenal.

A lightning bolt may have an electrical potential of from 10 to 50 million volts and a temperature of up to 50,000 degrees F.

Protecting yourself from lightning

The immense power released by a lightning bolt can damage people and property in a number of different ways.

If lightning strikes an object that contains trapped moisture, such as a tree or boulder, that moisture will instantly turn to ultra-heated steam and will often result in the object exploding. Persons or objects can also be damaged by the immense electrical charge carried by a lightning bolt.

For an individual, a direct or nearby lightning strike can bring about all the injuries associated with electrocution. Burns and respiratory and/or cardiac arrest are frequently seen in victims struck by lightning Because of the intense heat generated in the area of a strike, lightning is responsible for starting many fires.

There are an estimated 10,000 forest fires started by lightning each year. These fires account for the annual loss of up to 2 million acres of woodlands in the U.S.

For the individual, protection against the possibility of becoming a lightning victim falls into two categories.

Chances of being hit by lightning

The first is knowledge of when and where lightning is likely to strike, and the second is physical precautions that can be taken to minimize the chances of being struck. Of all the deaths caused by lightning in the U.S. each year, 90 percent occur between May and September, with the months June through August having the greatest percentage of lightning fatalities.

This statistic makes sense when one takes into account the greater number of storms which occur in the heat and humidity of the summer, as well as the fact that outdoor recreation in the U.S is mainly a summer activity.

Among those activities with high lightning fatality rates are golfing, water sports, hiking, and tractor-related fanning. Of these, water sports represent the majority of the lightning-related fatalities.

According to the National Climatic Data Center, 40 percent of lightning deaths take place in, on, or near bodies of open water. The most hazardous water-related activities — fishing, boating, and swimming.

Golf by its very nature exposes the player to a higher than average chance of being hit by lightning. As with hiking and less so camping, golf is generally played on open terrain where the player represents a high spot on the terrain and is thus more exposed to lightning strikes. A metal golf club held high can act as a lightning rod and provide a path of least resistance for a lightning strike. This lightning rod effect is not confined to golf clubs.

Backpacks with metal frames, bicycles, open golf carts, tractors, motorcycles, even metal tent poles, can all serve as surrogate lightning rods. Your safest course of action if caught in a lightning storm is to get as much distance as possible between you and any metal object you might be using. The more distance between yourself and potential lightning rods, the less chance you will have of falling victim to lightning “side flash.”

Side flash is a phenomenon which occurs when lightning strikes an object on the ground, and there is another good electrical conductor (in this case, you) close by. The second conductor will draw charge from the main lightning strike and, in effect, create a second “circuit” which while not as powerful as the main charge, is none the less more than powerful enough to cause injury or death to an individual.

Statistically, the single largest category of lightning deaths is made up of those who seek shelter under trees during a thunderstorm. Large isolated trees act as lightning rods, attracting lightning strikes. The side flash effect can cause injury in a large area around the struck tree.

DO NOT USE LARGE TREES AS SHELTER. It is far better to be wet and alive than dry and fried.

There is a good chance that lightning may be about to strike you or your vicinity. Lightning can and does cause injuries indoors.

What to do indoors

An average home provides a number of pathways by which lightning may enter. Power lines, telephone lines, chimneys, water pipes, CB and TV antennas, etc., all provide convenient pathways into a home for lightning. The safest place to be inside a house during an electrical storm is in the center of the home.

Make sure all doors and windows are closed, as this helps prevent side flash injuries. If you have warning of an impending electrical storm, unplug as many appliances as possible Never attempt to disconnect any electrical appliances from the house wiring DURING the storm.

Do not take baths, showers, do dishes, or engage in any other activities in which you will come into contact with the water pipe system in the home during the storm. Water pipes are grounded directly to earth and serve as excellent conductors for lightning strikes

Protecting A Home from lighting

What are the chances of your home being hit by lightning? Surveys show that for an average home situated in a region of moderate thunderstorm activity, that home will be hit by lightning once every 100 years.

Recommended article: Your Daily Life With And Without Power

Surge arrestors prevent lightning from damaging equipment and entering a home through electrical or telephone lines. They are designed to ground the lightning-induced electrical surge before it gets to the home electrical wiring and any appliances which might be plugged in.

Surge arrestors can be installed separately or as part of a lightning rod system. They should also be installed between any outdoor antennas, (TV, CB, satellite), and the equipment which the antennas serve. Such an installation can prevent costly damage to high priced electronic equipment.

Surprisingly, most lightning strikes on people are not fatal. A phenomenon known as “flashover” tends to channel the electric surge along and around the outside of the body, preventing vital organs from being damaged. The severity of injury in this type of lightning strike can vary.

Victims may suffer a temporary muscle paralysis, unconsciousness, and or shock.

The primary treatment for this type victim is to treat for shock. Keep the victim lying down, elevate the legs 12 to 18 inches, keep the victim warm, reassure the victim, do not give anything to eat or drink, keep alert for cardiac or respiratory failure, send someone for medical assistance.

Should the victim have suffered a severe lightning hit and have lapsed into cardiac and or respiratory arrest, cardiopulmonary resuscitation, CPR, must be started immediately.

The quick application of properly done CPR techniques can save the life of such a victim. CPR courses are readily available and should be taken by the survivalist and non-survivalist alike. Contact your local Red Cross chapter or the American Heart Association for information on CPR courses.

Lightning is among the most studied of all-natural phenomena. The U.S National Weather Service and other agencies have begun to set up a nationwide series of lightning tracking and detection centers. Their goal is to be able to predict when and where severe lightning conditions are likely to occur.

In many areas, lightning forecasts have already become a normal part of TV and radio weather broadcasts. Whether or not science eventually is able to predict lightning activity, lightning itself will always present a beautiful but deadly threat to the individual.

While the techniques in this article cannot guarantee absolute safety, they can lower the chances of your becoming a lightning victim. In a lightning storm as in most survival situations, knowledge, common sense, and calm action can save your life.