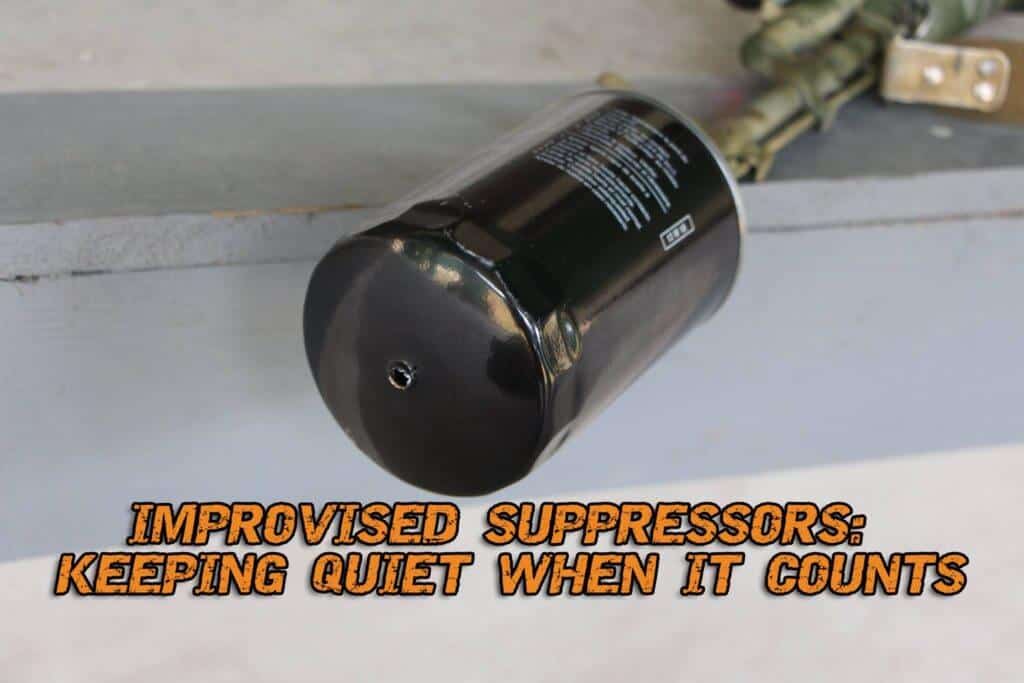 When “S” hits the fan, the element of concealment may become a prepper’s greatest safety net. In times of disaster and civil unrest, commodities and daily necessities become incredibly valuable. Having a suppressor for your firearm will help you keep a low profile. Because of this, the well-equipped prepper may have to face threats never faced before.

If you’re prepping for such events, the realization that you may need to defend yourself and your property with lethal force should be a consideration you’ve already accepted.

But that doesn’t mean you need to draw attention to yourself.

Having to use lethal force in the vicinity of an urban center or residential suburb can trigger riots, disorder, looting, and widespread violence. Think of that gunshot as the starter pistol to a potential powder keg. If you’re in a defensive posture and must use lethal force to dispatch a threat, you may need the element of concealment as a tactical advantage.

Today, we’re talking about improvised suppressors and keeping quiet when it counts.

Suggested article: The Most Common Concealed Carry Mistakes You Should Avoid

Contents hide
1 Suggested article: The Most Common Concealed Carry Mistakes You Should Avoid
2 How a Suppressor Works
2.1 This is how a suppressor works:
3 It’s All About the Round Being Fired
4 If Possible, Stick with Sub-Sonic
5 Types of Improvised Suppressors
5.1 1. Good ole’ bed pillow
5.2 Pros
5.3 Cons
5.4 2. Oil Filter Suppressor Adapter
5.5 Pros
5.6 Cons
5.7 3. The “Solvent Tube” Suppressor
5.8 How the Solvent Tube Kit Works
5.9 Related article: How to Build an Unregistered Survival Rifle with Hand Tools
6 Cost and Legality
6.1 Pros
6.2 Cons
7 Summary
7.1 Other Useful Resources:

First, the necessary disclaimers: We’re not lawyers, and nothing in this guide should be construed as legal advice or counsel. The information described in this guide, no matter how detailed nor specific, is for educational purposes only. You must review and adhere to all ATF laws and regulations before attempting to buy, build, or use any type of firearm suppressor (commercial or improvised) or NFA item.

How a Suppressor Works

Before we talk about how to effectively (and safely) suppress a gunshot with an improvised device, it’s important to understand how a real suppressor works. First, suppressors do not silence gunshots. Those fancy “pew-pew” sound effects made by a certain martini-sippin’ secret agent’s suppressed Walther do not represent how a real firearm suppressor works or sounds.

This is how a suppressor works:

As a bullet is fired, the propellant (gun powder) produces extreme energy in the form of superheated, pressurized gas. Normally, this gas rapidly expands in the atmosphere as it exits the muzzle, producing the classic sonic blast (“boom/crack”) report of a gunshot.

When a suppressor is installed on the muzzle, the expanding gas is trapped by the suppressor tube. Inside the tube, a series of baffles, chambers, and holes force the gas to slow down, cool, and expand more slowly before exiting the suppressor.

So, the goal of using an improvised suppressor is to slow down those gasses, which reduces the sound of the resulting gunshot. Keep in mind, suppressing a supersonic round will still yield a loud “crack” and such rounds typically produce much greater amounts of gas and energy. In fact, the round being fired is quite important.

It’s All About the Round Being Fired

Commercial suppressors are capable of handling rounds up to .50 BMG. They’re often made from weapons-grade materials like forged aluminum or steel, and they can safely handle the energy produced by big, fast bullets.

But we’re talking about using an improvised suppressor, so considering the caliber and weapon you’re trying to suppress becomes critically important. Thankfully, most preppers have chosen to invest in small-caliber arms like .22 LR pistols and rifles, 9mm handguns, or lightweight 5.56-platform rifles. Yes, the 5.56 round is supersonic, but it’s also small and relatively easy to suppress.

If you’re trying to suppress a firearm using an improvised device, we recommend sticking with smaller cartridges like these. Trying to throw a homemade can on a Winchester .308 rifle will likely result in the same loud gunshot with a little debris and possible injury following it. On the opposite end, sub-sonic pistol rounds like .45 ACP will work best with an improvised suppressor.

If Possible, Stick with Sub-Sonic

If you’re intent on keeping things as quiet and manageable as possible, you’ll want to suppress a round that, under normal circumstances, travels around or below 1,125 feet per second. This is the supersonic sound barrier. Any bullet traveling at (transonic) or above this speed will yield that loud “crack” as it travels downrange. Most supersonic bullets require more gun powder to reach speed, which will make suppression even more difficult, too.

Suppressing a round that normally travels slower than 1,125 feet per second will dramatically reduce the reported sound of gunfire, and it’ll be much easier to manage with an improvised device. Many rounds that travel at transonic or near-transonic speeds, like 9mm Parabellum (some of which travel around 1,200 FPS), can also be effectively made sub-sonic just by being suppressed.

Now, let’s finally look at some of these devices and solutions:

We just spent a moment talking about how Hollywood gets suppressors wrong, but our first improvised suppressor is actually one of the safest, easiest, and most effective for handgun rounds. If you’re a fan of spy films or mafioso flicks, you’ve probably seen this one already:

Yes, pressing the muzzle of your weapon into a full-size pillow and firing on your target will dramatically reduce the sound of gunfire. The pillow works so well that this test has been popularized on YouTube. Many shooters have successfully made typical 9mm handgun rounds much quieter, even sub-sonic, with this test.

Notable shooter Jerry Miculek conducted one such test and discussed his findings in detail. This type of suppression obviously reduces effective range and accuracy and should only be used in an emergency or close-quarters situation.

Nonetheless, this improvised suppressor does enough to turn a shot heard down the street to one contained in a single room. It’s a perfect Ace card in the event of a home-defense situation. Simple logic says the thicker the pillow, the better the effect.

The little filter that keeps your car’s engine oil clean is basically designed to function like a suppressor. Most oil filters are made from heavy-duty aluminum housings, they already have threaded fittings that roughly match the diameter of most firearm muzzles, and they contain internal baffles, filters, holes, and media that are perfect for damping sound and containing energy.

The suppressor market and some savvy shooters noticed this, so they started making conveniently-sized, threaded oil filter adapters. Many of these adapters match the threads on an oil filter and the threads on your typical handgun or rifle muzzle (like ½” x 28 for many 9mm handguns and AR-15s).

Using an oil filter as an improvised suppressor simply means drilling a hole in the end of the filter and threading it onto your muzzle. It’s strongly recommended you at least drill out the exit hole yourself, but some shooters just send a round through the filter to punch a hole (this can be explosive and dangerous). Used filters soaked in oil will provide even better sound deadening, and most oil filters can handle a few rounds before the internals stop damping sound.

Pillows and oil filters are basically once-and-done devices, intended to be used in a pinch. But solvent tube suppressors can be built to look, act, and function just like a store-bought suppressor, handling hundreds of rounds with effective sound deadening.

The solvent tube suppressor is an evolution of a product that was already meant to be used on a firearm. Solvent tubes are officially used as cleaning chemical traps, meant to capture the CLP or solvents that drip out of the muzzle from swabbing the bore.

But threading a large aluminum tube onto the end of a muzzle sounds quite a lot like a certain other device, and so the solvent tube “improvised” suppressor was born. These kits can hardly be called improvised today, but they can be legally purchased without any ATF paperwork because they’re not quite manufactured to function like a suppressor. Yet.

If you’re unfamiliar, the concept is the same as an 80% lower receiver. You can legally purchase a firearm blank with no paperwork, no FFL, no background check. The whole kit can even ship to your front door. You must then machine the product further, turning it into a firearm. The same applies here:

How the Solvent Tube Kit Works

Most solvent tube kits include a forged aluminum tube that is made with the exact dimensions of a real suppressor. And, conveniently, many of these solvent tube kits include an internal “filter element” that’s also made from forged aluminum with a series of baffles and holes. These filter elements are shaped just like the typical baffle system inside a suppressor, and many even have the center of the baffle system drilled out so a fired round can pass through.

Related article: How to Build an Unregistered Survival Rifle with Hand Tools

But to get around the legal hurdles with the ATF, most solvent tube kits feature a sealed end cap. This end cap prevents any fired round from being allowed to pass through the tube, disqualifying the kit as a suppressor. But a simple handheld drill and a few minutes behind closed doors with said end cap are all it takes to convert the solvent tube into a real, weapons-grade, functional suppressor. Some solvent tube kits may also ship without the baffle system drilled out, which will require precision machining.

These solvent tube kits usually run around $50 to $100 and can be easily purchased on eBay and other digital retail sites. That’s pennies on the dollar compared to buying a suppressor at the gun store, many of which start at $1,000 and go from there.

Keep in mind, you still need to follow the ATF’s rules and apply for a tax stamp if you purchase a solvent tube kit with the intent of building a suppressor.

Unlike a homemade firearm, a homemade suppressor is still subject to the laws of the National Firearms Act (NFA), which means you need that $200 tax stamp to stay legal. If you don’t drill out that end cap, however, you don’t yet own a suppressor. If you’re prepping, read between the lines.

Affordable threaded adapters can also be purchased for using an oil filter as an improvised suppressor. Lastly, solvent tube kits qualify as suppressor-making kits, providing all the parts needed to build a real, functional suppressor like a store-bought unit. If you plan on buying or building a suppressor, always follow federal law and ensure you’re operating within the legal guidelines of the ATF and NFA Act.

2 thoughts on “Improvised Suppressor: Keeping Quiet When It Counts”