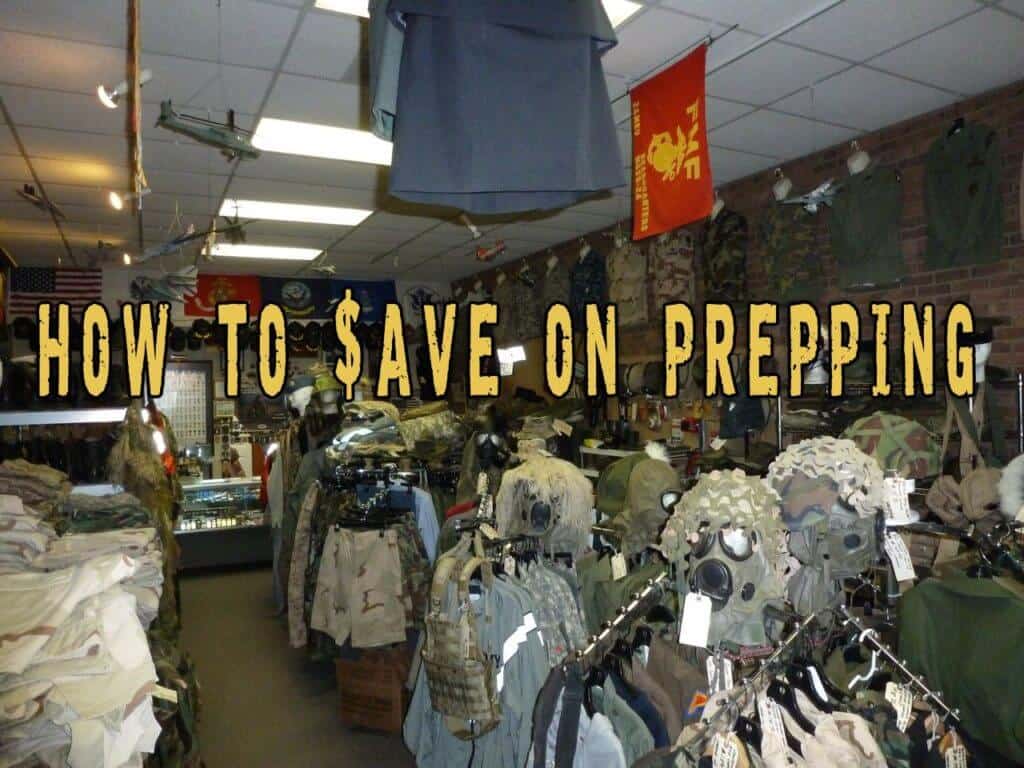 No matter what other people will say, emergency preparedness isn’t cheap. You are going to need a lot of stuff even if you keep it at a bare minimum. Prepping can become costly and how much you spend is up to you. The tips in this article are designed to help you save money and I can tell you firsthand that they actually work.

I have seen preppers spending large sums of money on the best gear available on the market. They buy thousands of pounds of dehydrated foods and all sorts of vehicles that are capable of sustaining life for a very long period of time. While some preppers have money to throw away on stuff they may or may not use, there are those who waste large sums of money on stuff that isn’t going to help them in a survival situation. Prepping is expensive, but it doesn’t mean you have to break the bank in order to survive.

Here are some of my tips to save money on prepping:

Contents hide
1 Here are some of my tips to save money on prepping:
2 Plan ahead and take it slowly
3 The end of the season is the perfect time to buy gear
4 No, you don’t need the most expensive gear!
5 Don’t spend your hard earned money on gear you’ll never use
6 Don’t buy read-made kits or systems
7 Take advantage of the online world
8 Tailor your budget to make room for prepping costs
9 Preparedness items are great gifts for preppers
10 Don’t wait until the last minute to get the items you need
11 Being cheap is not a bad thing
12 Always start small and add to it as you go
13 Recommended preparedness solutions:

Plan ahead and take it slowly

I’ve received a lot of emails from people saying that emergency preparedness is too much for them to bare. Saying that they are already spending a fortune on it. The first mistake most preppers make is to go out and buy all the survival gear and supplies they think are useful for their survival. You should start first by establishing for which disaster your family should prepare. Afterwards, you should build your cache of supplies based on the needs of your family. If you buy everything at once, you’ll pay a full price for a lot of the stuff you need. You won’t be able to take advantage of sales or deals.

A must read: How to establish prepping priorities

If you want to get your gear for a decent price don’t buy it at the beginning of the season. For example, I never buy cold weather gear at the beginning of winter because I don’t want to pay big bucks when the stores are speculating the demand for such gear. You should never pay full price for anything, unless you have a pressing need to own it. You should wait for the end of season sales.

At the end of each seasons, stores have to get rid of the stock they have. They are trying to make rooms for the stuff for the upcoming season. You can find items at rock-bottom prices. Over the years I’ve purchased gear for less than half of what it was originally priced. Good things come to those who wait they say. If you catch the right sales, you will end up with twice as much stuff with the same amount of money.

No, you don’t need the most expensive gear!

When people start prepping for a crisis situation, they will go out and buy the most expensive gear available on the market. You plan to buy a basic tent and you come home with a state of the art, ultra-light tent that has built-in solar panels, GPS and what not. The marketing scheme used by many survival gear vendors will make you spend a lot of money on high-end gear that you can’t really afford.

While I do understand the necessity of spending a small fortune on vital systems for producing food or devices that can help you obtain water, you’re going to be much better off with mid-ranged priced items. You will get a lot more gear this way and that gear is usually of pretty good quality.

For some, this may sound like common sense. However, you’ll be surprised how many people throw money on things they think it will save their life under various circumstances. You should take a good look at the area you live in and the area you plan on bugging out to and plan accordingly. Don’t spend money on items that you will never use and be smart about your purchases.

A close friend of mine recently got a defibrillator. When I asked him about it, he told me that it’s better to have it in case he will need one. I don’t see how that will play out since he is a single parent. Even more, his 12 year old boy doesn’t have a clue about how the device works. Bottom line is, if you live in the desert don’t buy snowshoes.

Improvisation is the mother of prepping. When it comes to ready-made survival kits, I tend to stay away from them. I’ve seen survival kits with a price tag anywhere from a couple of hundred dollars to a couple of thousand dollars. All depending on how big the kit is and the items it provides. With the money you would spend on such kits, you could create your own kit that has supplies of better quality. You will put together something that is tailored for any type of disaster or a person’s individual needs.

All the pre-made kits you can buy on the market are usually designed to be used during a certain type of disaster. They fail to prepare you for everything. Making your own survival kit takes a bit of extra effort on your part, but if you have a list with the things you need for the types of disaster(s) you are prepping for, you will end up saving money on your preps.

Take advantage of the online world

Nowadays, almost every online store has a whishlist to which you can add the products you desire. I have various whish lists saved and I check them periodically to see how the price is changing. I’ve managed to get some great deals by following online stores. There are even those that send you an email when your favorite items are on sale. I’ve also made a custom of reading and watching reviews of the products I need because they can provide me with a clear picture of what to expect. When I read a review I always start with the bad reviews first. In the marketing world, an unsatisfied customer equals ten satisfied customers.

Tailor your budget to make room for prepping costs

Including your prepping costs in the monthly budget is a must if you want to handle unexpected costs. If you don’t have a monthly budget, you’re doing something wrong. Maybe you are rich, therefore, you don’t need to read this article anymore.  I’ve developed the habit of setting aside a certain amount of money every paycheck or project I get. I also have a sale budget that I keep for certain times of the year like major holidays.

My goal is to increase it with every opportunity that comes my way. Creating a budget and monitoring it closely helps enormously with the prepping costs and in time. You will learn where you can cut corners to have a little extra left for your prepping projects. Even cutting back on a few cups of Starbucks coffee a month can free up a significant amount of money that you could spend elsewhere.

If you are one of those people that get all sorts of inappropriate gifts for Christmas and birthdays, maybe you should start asking for preparedness items as gifts. Think of it like this, the more items people will give you, the less you’ll have to buy and you won’t be disappointed by receiving unwanted stuff.

This also solves a major problem – unwanted gifts that you have no clue what to do with. If you ask for preparedness gifts, you will get something you need and want; you won’t have to figure out what to do with the expensive tie your aunt gives you every year.

Some people wait until the last minute to buy what they need and that’s not very preparedness-minded. You need to prepare for the disasters you planed for sooner rather than later. Being a late shopper will leave you with an empty basket.

There are always those items that disappear first in a crisis and once stores run out, people will sell you their excess gear for triple the normal going rate for it. And if you need to have those items, you will have to break the bank to get them. If you plan ahead and make a checklist, you can get the items you need before disaster strikes.

Being cheap is not a bad thing Keeping the change can actually help and you will end up saving a couple hundred dollars a year to put towards your prepping costs. Try to spend cash and avoid using your bank card to pay for everything. If you take all the money you spend on gas, groceries, snacks and beer and you separate it out into envelopes, it will help you track better your spending habits and you will avoid overspending.

If you spend cash and take the change you get, you will be able the save it and store it every day. Your waitress may give you an angry look or two, but at the end of the year you will be able to use the money you’ve saved on the gear you’ve been wanting and you will forget all about it.

Always start small and add to it as you go

Most people give up on prepping because they say that the costs are just too much to bare. These are the people that go out on a shopping spree. They try to get as much as they can, as fast as they can. You won’t be able to build your emergency supply up if you take a second mortgage. You should start with a two week supply of everything you need first, and build up from there.

Setting goals and reaching them without being stressed or going broke will give you the push you need to keep going. Once you build up a large supply, you can scale it and build a one year supply, two and so on. You will eventually reach out towards self-sufficiency as that is the goal for many of us. If you do it gradually the prepping costs won’t have such a big impact on your monthly or yearly budget.

I want to close this article by saying: whatever you do, don’t give up on prepping for a disaster because you think you can’t afford it. The reality is that, in these uncertain times, you can’t afford not to be prepared. Rather than giving up and stay at the mercy of the randomness factor, you should learn how you can cut corners to free up some money for your prepping projects.

3 thoughts on “Keeping The Cost Of Prepping To Minimum”