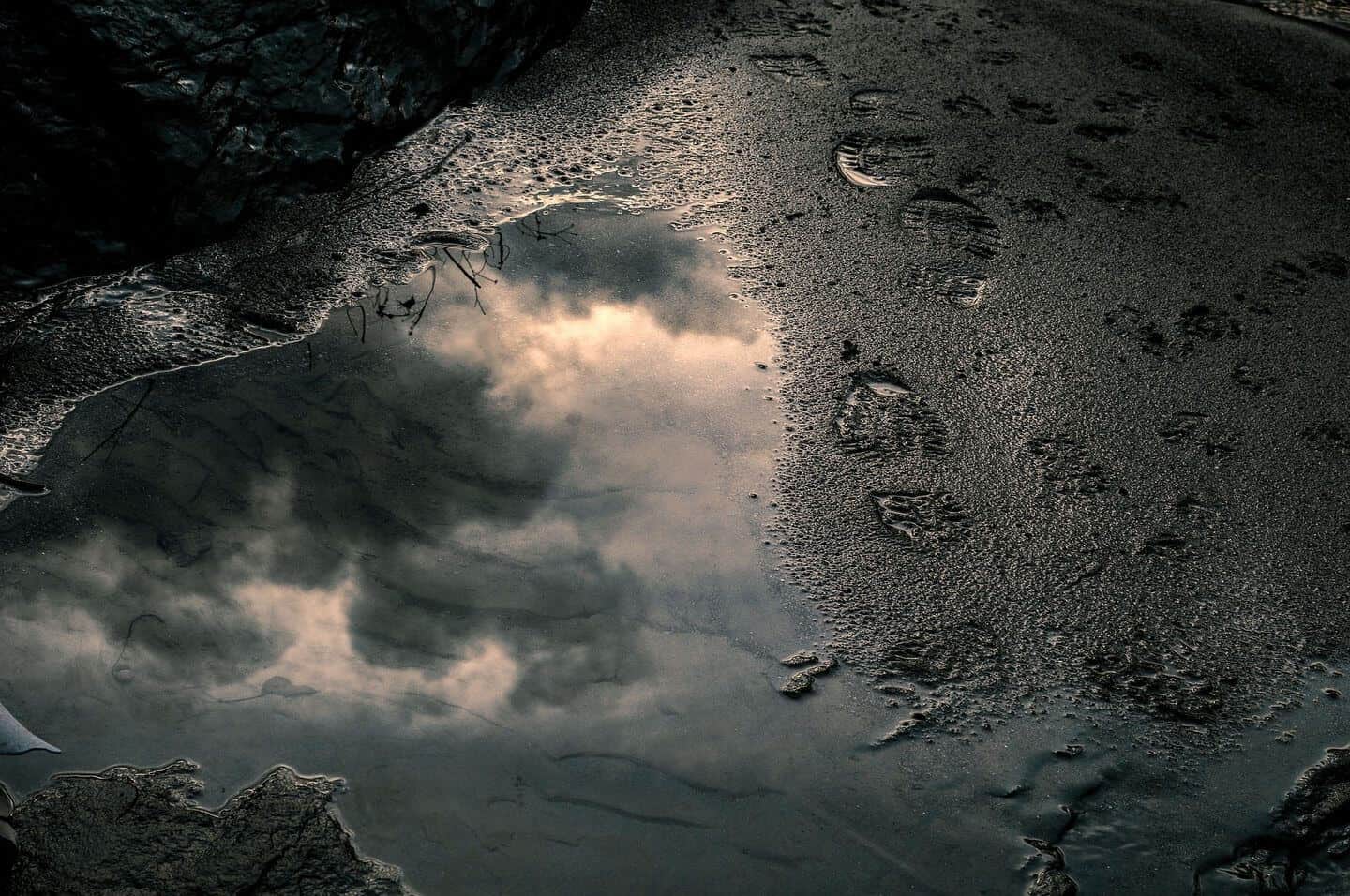 Tracking techniques are useful for hunting purposes, but they prove their true worth when searching for a missing person. Tracking man is not an easy task, and you need to have a lot of experience in the field besides mastering the theory for man tracking techniques.

How it all started for me

Several years back, a member of our survival group had his younger brother disappear in the Coconino National Forest in the rugged country near Happy Jack, Arizona. When he got a call from his wife who had been visiting friends in the area, notifying him that his brother had been lost, he immediately called me and as crisis leader of our group I called all members to help with the search and rescue party.

The Coconino County Search and Rescue unit was called out, and before long, a massive search was underway to find the man. The emotions that a leader must face are challenging during a crisis of this type. We all knew and loved the young man. The dreadful heart-rending of this situation actually put the man’s brother out of commission by mid-day.

My people were counting on me. I remember coming upon an old rock cistern and not being able to look in it. It took several minutes before I could do it. Then I had difficulty seeing the bottom of the thing through the patina of tears that covered my eyes. I could not let anyone else see; after all, they were depending on me.

Recommended reading: What To Do When A Group Member Goes Missing

Finally, after some agonizing hours of searching, the young man was found. I made an oath to myself that if it were ever possible, I would learn more about tracking and search and rescue techniques. It took several years to learn some man tracking techniques, but I kept that oath!

Man tracking techniques for search and rescue are really more of a science and to some degree an art. Many search and rescue units become drinking clubs and horseback roping leagues. It is unfortunate that this skill is many times not studied by those who claim to practice it.

It was lucky for us that the Coconino Search and Rescue is one of the finest in the country. You would have to be when the Grand Canyon is part of your beat. One skill that impressed me and is the subject of this article is the art of man tracking techniques.

Tracking techniques for both men and animals?

Man tracking techniques should not be confused with the tracking of game animals. While the two have similarities, they also have wide differences. The basic type of search for the average search teams is the line search. This simply means get a group of people in a line and cover a specific quadrant on a map.

While not as effective as many other methods, it does have the benefit of being simple so that untrained and out of shape people can utilize it. Trackers should start ahead of these groups so that tracks or sign are not compromised by those who are trying to help.

Trackers or a tracking unit should start by casting for sign in the last reported place the lost person was seen. Footprints, clothing, shoes, gum wrappers, or anything the lost person was known to have on his person can be used to mark his passage across the earth.

What method is most effective to initially find tracks?

When it comes to man trackig techniques, I like two, the Cross Grain and the Circle Cut. The Cross Grain is one you may have learned in the Boy Scouts. The searcher simply studies the earth for sign while walking in a pattern. This pattern is that of interlocking L’s. For the close study, a person may wish to use very short legs in his pattern. If larger distances are needed, that pattern can be enlarged. Two people can use the pattern working together as well.

The other good track acquisition method is the Circle Cut. This is simply searching for signs by radiating from some central point for a given distance. The ending point of each leg will eventually describe a circle. This method can be used with one person but really comes into its own when you have three or more searchers. 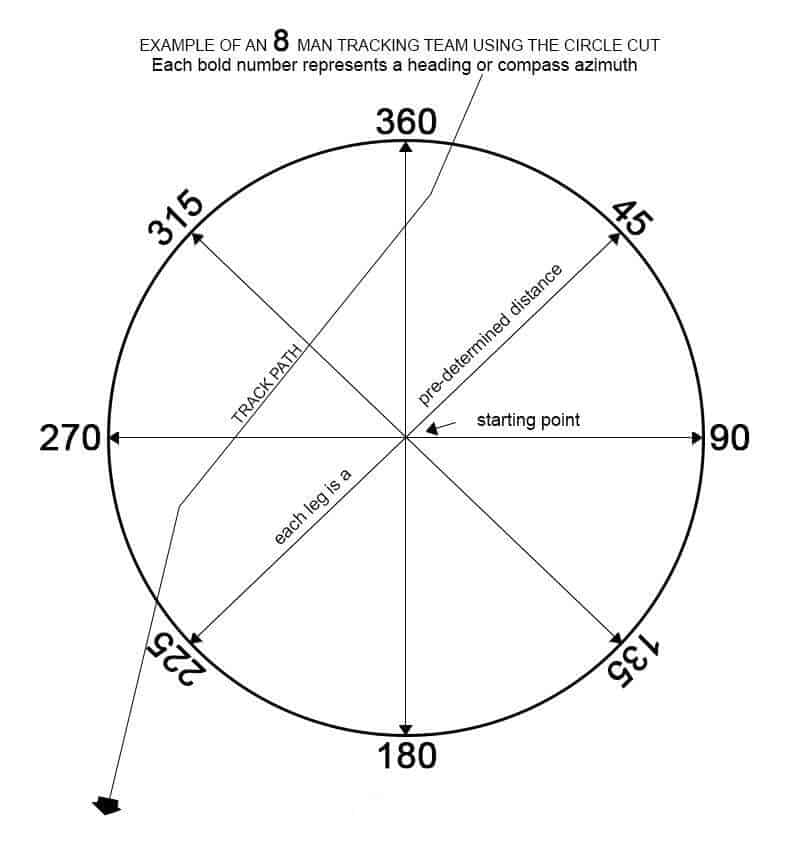 Each searcher can then travel a given distance on a compass heading searching for sign. Remember that as the distance from the starting point increases so does the distance between each search leg. This method is particularly effective because it searches in a 360-degree circle instead of just one direction.

After careful searching let us say that our tracking team has found several tracks that have been identified as being the right size and perhaps the mother remembered that the shoe print looks like those on the boy’s tennis shoes.

What do you do?

Keep untrained people away from the area and track boxes (see track box picture) which can tell you how long the lost person’s stride is if he was running etc. Most of all, get your team familiar with the imprint the shoe has made in the earth. Casts can be made of prints as well. Is a second person involved? Is the victim limping? 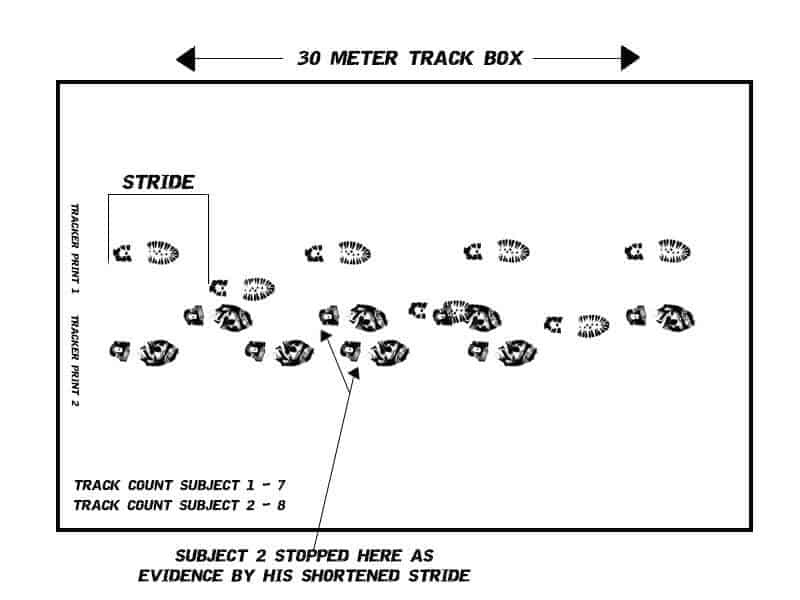 After finding tracks move down the trail left by them. Be careful not to obliterate them. If you are tracking a dangerous person, you will need several people to keep watch for the bad guy. See the diagrams below. 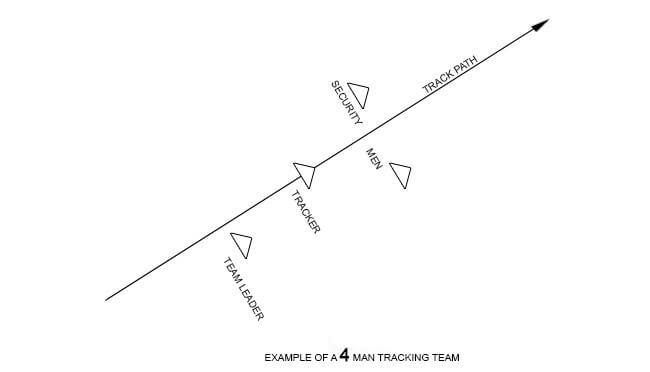 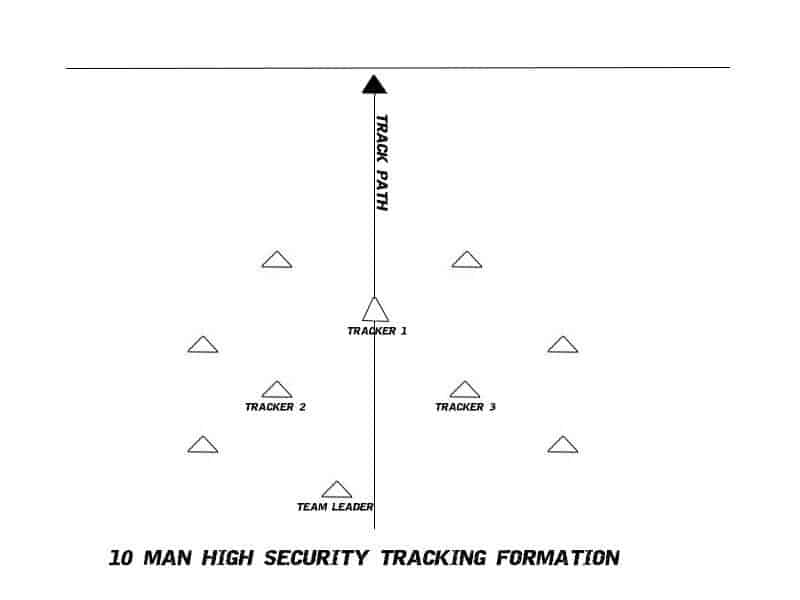 Even if foul play is not suspected use security formations. A luminous marker should be left along your back trail from time to time. It is easy for a single searcher or a search team to get lost simply because they concentrate on the ground and not landmarks.

When it comes to man tracking techniques, a team should have a navigator to avoid this problem. Security people should not track. It is good to have a spare tracker as it is very taxing and a tracking team can move faster even if the trackers spell each other every 20 minutes or so.

Another method can be used to find sign if you have identified a clear, consistent trail of tracks. It is called cutting for sign. See the diagram below for a better understanding. 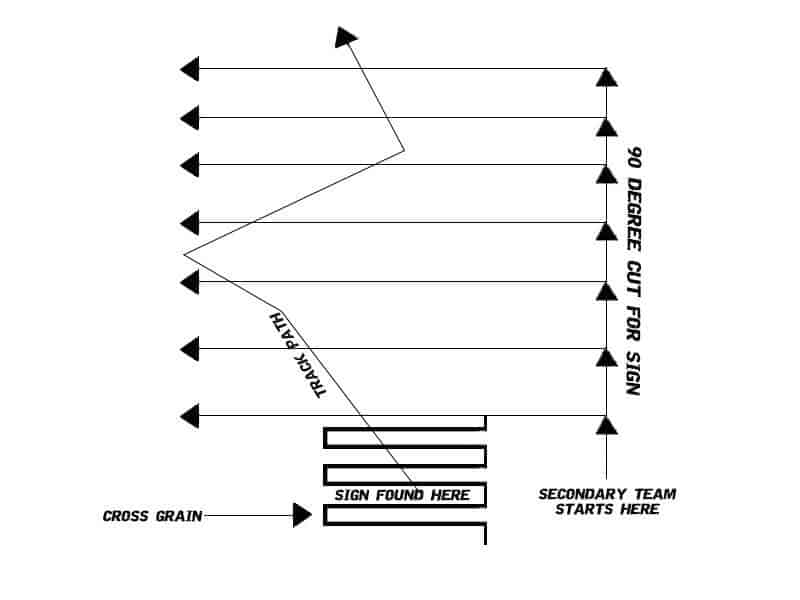 This method can speed up a rescue by expediting tracking. Radios should really be used for this method. A tracker or tracking team is left on a set of tracks and tries to continue following them.

If one of these people who have “cut” for sign comes across the lost person’s tracks and can clearly identify them, he begins to follow the track path and eventually can radio the team leader of what he has found.

The team leader may decide to move up everyone to this location and advance the search. He might just to be sure, keep the original team on their track path until they reach the man who cut for sign and discovered the track path.

He might repeat the cutting for sign process again hoping to gain time on the lost person. This method can also be used when a clear track path is lost at a river or in difficult country.

Perhaps a search team can reacquire the tracks of a lost individual by avoiding the obstacle and picking up the tracks on the other side by cutting for sign. This method can be tremendously effective in advancing a search or picking up time on the “victim,” especially in the face of bad weather or nightfall if the victim is very young.

It does take personnel who have been moderately trained, however. This type of activity is extremely good for a survival group to practice.

Many people feel that this is impossible or above their ability. It is not! It does take practice. Have a person during the day lay down a track in good tracking country where a clear print is left.

Bring in your team of beginning trackers that even-ing and let them find the track using the above methods, just before nightfall. Your trackers with a flashlight (a GI angle head flash works great) can spot tracks by keeping their flash-light just off the ground shining at the earth at about a 20-degree angle. The prints are actually cast into relief by the light and darkness combination.

Many old cougar hunters use this method just before sun up to find cat tracks in the snow or mud using their truck lights. In the right country, night tracking can be easier than day tracking as faint tracks may stand out better.

Remember, it is easier to sneak up on someone or a team at night, especially when they have flashlights on. If you are forced to track a person who is dangerous or has been abducted, keep the flashlight away from your body.

A must-read: How To Develop Night Vision For Survival

Have security elements at some distance from the tracker and in front of them. Instruct them not to look at flashlights or car lights, so they do not lose night vision. Have an extra tracker to rotate the tracking duty.

Night tracking is strenuous on the eyes and back. Remember to keep rear security who’ve been warned not to be backlit by the tracker’s flashlight. Only one flashlight should be lit, and that is the tracker’s.

The spare tracker while not working, can be personal security for the working tracker, keeping him from running into thorn bushes, etc. Keep the flashlight away from your body so that if shots are fired they hit air or the light, perhaps saving your body.

Someone should keep track of where the night tracking team is going, for it’s easy to get lost at night when occupied by other things than navigation. Night tracking is really a team effort though one man can do it. To get good at it, practice!

A few points to remember for man tracking techniques:

Man tracking techniques are both an art and a science. Some can be taught, but most have to be learned through practice. It is worth you and your group’s time to learn it. It may be the only means at your disposal to save a member of your family or a member of your survival group. However, as I said before, learning the man tracking techniques should be followed by practice in the field.

Man tracking techniques may also be the only ways in a post SHTF world to track down something which has been stolen from you or to rid the world of a problem human. I know that if someone would harm one of my loved ones in such a scenario, they had better watch their backtrail for a very long time!

The Common Vegetable that Will Increase Your Heart Attack Risk

The Most Complete Knowledge To Survive Any Medical Crisis

The vital self-sufficiency lessons inherited from our great grand-fathers

2 thoughts on “Man Tracking Techniques Useful For Search and Rescue”