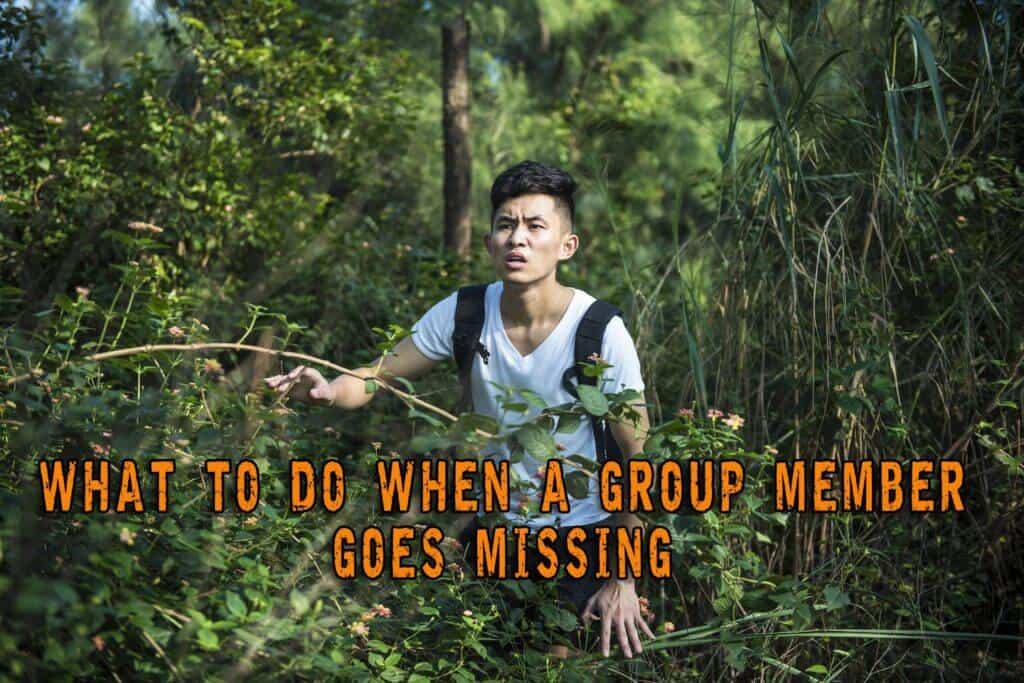 It is definitely important to understand how to survive if you ever find yourself lost or stranded and all alone; but have you put much thought in what you’d do if your buddy or a group member goes missing and doesn’t return to the car or camp when expected?

Being the preppers that we are, if we find ourselves as a part of a group (whether as a camping group or as several surviving passengers of a crashed jet awaiting rescue), it is immensely important that we plan ahead for the moment that someone may go missing.

Try to resist the instant urge to start your own search for missing a missing person if professional help is nearby. They are skilled professionals with much experience in such situations.

As a group, immediately create a procedure for each member to let everyone know specifically where they are going and how long they plan to be gone. In the game plan should be the agreement that once they realize they are lost, the member should simply sit tight. It will be much easier to be found if you just stay put; the further you get off track, the harder it will be for help to find you. This strategy should be stressed abundantly.

Another important strategy to follow (if possible) is to have each member carry a map of the area, a compass, a straight blade knife, and a personal survival kit.

Before setting out on the grand adventure you and the bros have conjured up, be sure to talk about any medical conditions any members may have.

Pay attention to and remember the clothes that each member is wearing, the color of their shirt, style of their boots, and the state of mind that they appear to be in. This information could potentially save a lost ones life and is as good as gold to the search officials who will take over the rescue.

The moment that you realize that a person is officially missing is the most vital time in a lost hiker scenario. The number one thing to remember upon finding a member missing is to keep your cool; keep a level head. Losing your cool will inescapably lead you to irrational, foolish thinking.

Signaling is the next most important skill or part of the entire search situation.

To effectively signal to your lost companion, first pick the most sensible place and blow a whistle (that should be in all personal survival kits) or blow the automobile’s horn. At a minimum, this will help the lost party to recognize that they are being looked for. If they are relatively close (as is often the case), they can walk towards the sound. This form of signaling should be done in one single spot (the most logical) so as to not confuse the lost party. Call it the homing location.

A set whistle signal system is a help.

There are a lot of ways to do this. Morse Code is the most standard, everyone should know SOS.

Whistles can be almost useless in a dense forest, though. But, they at least give most campers a sense of security…that they have someone, somewhere that is interested in their safety. It really helps if you are hurt to know someone is out there.

Make sure to let out long, consecutive (three will probably do) bursts. This will help to make it known that it is a signal; after three bursts, allow a silent pause to listen for a return signal.

If no return signal is heard, and the collective thought is that the person is truly lost and may be in trouble, the best bet is to reach out to a local ranger, police officer, or conservation officer. They will have been trained for, or know the proper connections who do know, exactly what to do. If you are forced into leaving the homing location, leave someone there to continue the signaling.

It is a known fact that attempting to set up your own search for a lost member, in most cases, is an atrocious idea. People have no training whatsoever, but do have “good intentions”, typically do more harm than good. More often than not, they become lost themselves. Or worse. They also risk annihilating useful clues that could have been used to find the original lost member.

Now, on a different note…

In certain circumstances, fellow group members may be forced by the nature of the scenario to conduct a search themselves.

In the case of these exceptions, there are some certain tactics to follow:

Recommeded reading: Making A Proper Campfire In The Wild – 10 Campfire Designs To Build

Have a game plan before the group ever heads out (if this is possible). A leader is selected in the beginning, typically being the most experienced. The Leader selects the slowest and the least experienced hikers in the group to be in front.

If you’re worried about the ones in front getting lost, then “Sandwich” them, with one experienced member in front, the Leader at the rear and the rest in the Middle.

It also builds confidence and trains those with few skills. These methods are used by the military while on “combat patrols”.

Also, a leader “never” lets any one member of the group “lag” behind “to catch up” for any reason whatsoever. It simply shouldn’t happen.

Obviously, no one ever plans on getting lost, it is simply one of those scenarios that life hands over at random times. Being prepared, as always is the case, is the only way to combat and successfully overtake a situation like the ones described above. Stay smart, and stay ahead.
This article has been written by Jonathan Blaylock for Prepper’s Will.