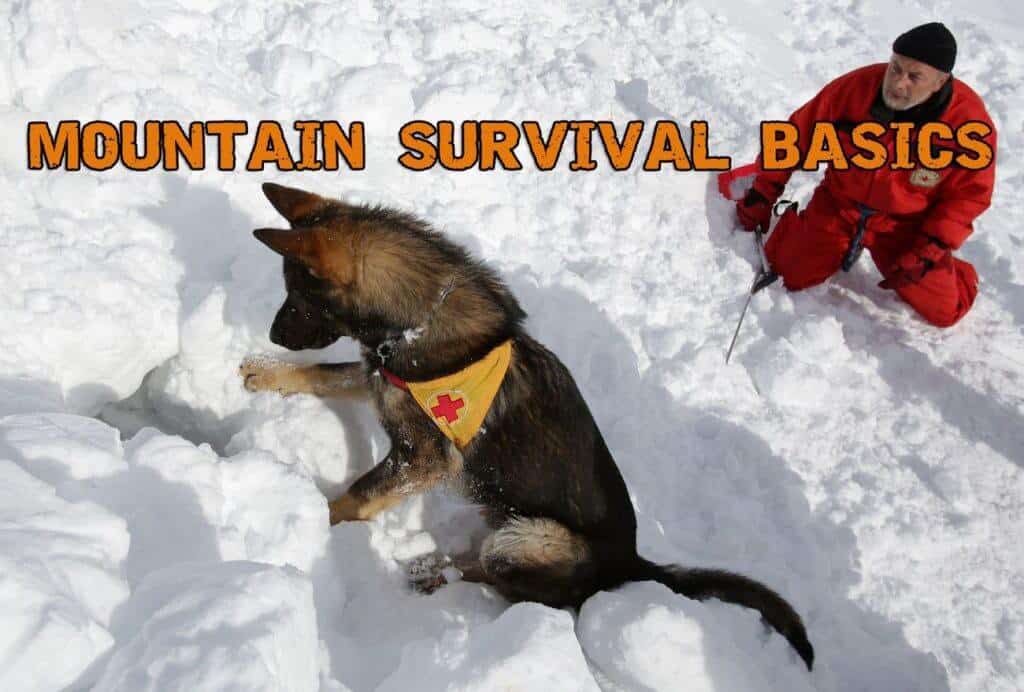 The mountain environment can be an unforgiving place. Most people immediately think of ‘falling off the mountain,” but be assured that weather, rockfall, avalanche, or even simple route-finding can be hazardous. Mountain survival is about planning and thinking before acting.

The high mountains can be deceptively alluring. One minute the blue skies and sunshine make shorts and ‘T-shirts seem okay. An hour later a sudden storm can drop the temperature 40 degrees and bring heavy snow and winds.

To survive in the mountains, you don’t need to have experience on an Everest expedition. On the other hand, inner-city couch potatoes will probably get their skins peeled. We could say that mountain survival requires common sense most of all. Unfortunately, that’s not the case for most folks.

I’ve divided the aspects of mountain sense into different categories, all of which can be within the grasp of even the most inexperienced outdoorsman. It’s a matter of common sense, preparation, and keeping your head in what can be harsh circumstances

It’s important to remember that cotton clothing can be a real problem, especially when it gets wet. As a good friend of mine, a mountaineer, used to say: “cotton kills.”

Keeping warm in harsh outdoor conditions has been one of man’s oldest problems. Indeed, the right clothing could be argued as a key element of human survival. If there is one word that I’d choose to describe best the methods of staying comfortable outdoors it would be layering.

It is a simple, common sense idea: when you’re cold, add a layer. If you’re hot, take one off. The concept of layering is important for mountain survival. Not just to keep you from getting too cold but also, it’s crucial to note, to keep from getting over-heated.

During a trip to Alaska, I heard of a local who collapsed while chopping wood in -40 degrees F temperatures. The diagnosis? Surprisingly, he was overcome by heat stroke. Starting from the inside out, the first layer next to your skin should be long underwear that “wicks” perspiration from the body.

In my opinion, the best choice is polypropylene underwear. The material is unique in that it combines the “wicking” action with almost no water absorption. For avoiding that “clammy” feeling of sweaty clothing in cold weather, polypropylene can’t be beaten.

Over the underwear should be a good wool sweater, fiber pile, or some combination thereof. Originally used in rugs and carpets, fiber pile was adapted decades ago by mountaineers searching for a way to stay warm in cold, wet conditions. Essentially a heavy-duty polyester fabric, pile won’t absorb more than 1 percent of its weight in water. The top layer should be a waterproof jacket and pants.

Getting around in the mountains probably has as much to do with prior knowledge of the terrain as anything else. If you know what you’re in for, you can plan accordingly. Climate and geology make the mountains what they are. If an area is known for heavy rainfall, you can prepare for it.

If you find yourself in unfamiliar territory without a map or a guide-book, there’s always a “way out”.

Here are a few key items to remember:

In general, traveling on snow is easier than over rock or bushy terrain. Proper waterproof boots are required, of course, and these should preferably have a sole with good traction. Snow conditions can vary considerably, and a half-hour hike on hard snow might be five hours or more in thigh deep slush. If the going is very bad, look around and seek anything with a different appearance: the snow may be more solid. On sunny days, late afternoons may turn hard crusts to mush. Try shaded areas where the crust still may be firm.

Mountain Survival and the perils of steep ground

A lot of people climb for sport, so there’s got to be something enjoyable about it. On the other hand, it seems that most people are scared to death of heights, and steep ground can literally paralyze some of those not used to the exposure.

If you’re overweight or out of shape, you shouldn’t be in the mountains in the first place — especially on steep ground. But any physically fit person can learn to handle him/herself on steep ground — even to the point of enjoying the experience.

Here are a few tips:

If you have a shovel, you can build a snow cave. There is an art to making a good snow cave. For protection against the elements, they can’t be bent. Keep in mind, however, that caves are colder than tents, but in severe winter storms a snow cave can be quite literally a real lifesaver.

The key to a good snow cave is selecting the best site. Look for large snow-drifts and, if possible, nearly vertical walls. In a high mountain environment, the start of a slope (where wind packs the snow) is often a good choice. But keep in mind that, on any slope steeper than 30 degrees, a heavy snow-fall can mean avalanche danger.

Related article: Building A Snow Cave To Survive The Night

Begin a cave by digging in and then up. If the entrance is sloped upward, the colder air will flow out. Also, be sure not to dig too close to the surface: high winds can turn into unwanted air conditioning during the night. Once you’ve dug a room large enough for sleeping, use your shovel to smooth the ceiling so that melting water will flow down the sides of the interior.

Mountain survival and the risk of avalanche

Being buried alive is one of the most repugnant deaths anyone could want to think of. And yet it happens each year to dozens of people.

Several factors make one slope safe and the other a death trap. First of all, keep in mind that roughly 80 percent of all avalanches occur after storms that leave heavy snowfall. Probably the worst situation is heavy snowfall followed by a warming trend.

Most avalanches take place on slopes that are between 30 degrees and 45 degrees. Generally, anything steeper than 45 degrees enables the snow to slough off and avoid dangerous accumulation. During a storm, these steep faces have small avalanches every few minutes.

When on a questionable slope, stay in the trees if possible. Though avalanches hardly ever start in the dense forest, it’s not unusual to find them hurling their death blows upon them down In the valleys. When on slopes, look around for rough terrain or rock outcroppings that can give a secure base to the snowpack. If, however, there are no irregularities, you can assume that the snow is very deep and could easily be very dangerous. And deep snow on wide open slopes of around 40 degrees is probably the most dangerous.

Related reading: Planning A Shelter In The Wild

So what if the worst does happen and you find yourself flying down the hill into white oblivion? A “swimming” motion can be helpful. It can keep you more to the upper levels of the avalanche debris. If you find yourself being buried, get your hands over your face and keep your lungs expanded. When you do stop and find yourself buried alive, your hands can help form an air pocket around your face. Under the right conditions, this can give you as much as an hour of breathing the available oxygen left in the settled snow.

If this terrifying event does occur, your life is, quite literally, in your companion’s hands. There is probably little you can do: most avalanche debris sets like concrete once it stops. Your companion’s job is to probe —with whatever is available — ski poles, ice axes, etc., — at regularly spaced intervals in the hope of finding you before you suffocate. This is important knowledge to have for mountain survival.

Most avalanches are caused by the weather, and the weather bears watching for a number of reasons.

An older friend of mine (the cotton guy), who has been climbing for nearly 30 years, is almost obsessed by weather before and during a mountain trip. His concern is understandable: there is little point involuntarily hiking into mountain storms.

If you’re already out in the wilderness, there are ways of forecasting weather, sometimes as much as 24 hours in advance. One of the most reliable ways of foretelling bad weather are clouds and cloud patterns.

In the mountains, growing and descending clouds are almost always a harbinger of poor weather. Saucer-shaped lenticular clouds are often a sign of impending storms. Watch cloud development and motion over a period of time to make rough forecasts.

In the northern hemisphere, certain general patterns can apply:

Layered clouds that lower over time indicate poor weather ahead.

A last word on mountain survival

The alpine environment can be as deadly as a well-armed enemy. But it can be dealt with and even enjoyed if you have a little bit of mountain survival knowledge.

There are those who argue that mountains are the most beautiful sights on earth. And even though that beauty can be dangerous, a little “mountain sense” can go a long way. What may have been a disaster might just turn out to be a great adventure.