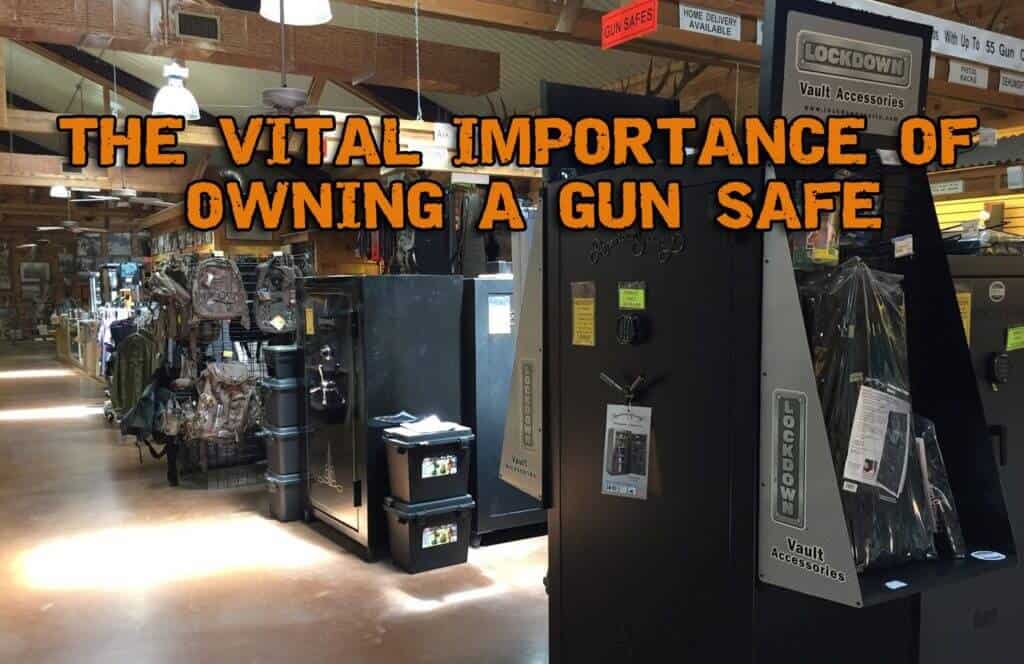 There’s simply no question that a gun safe is the best way to store your firearms. But even though many gun owners are fully aware of that fact, they still don’t take the time or spend the money to actually go out and buy one.

You don’t want to make this same mistake if you are a gun owner. There are many reasons to owning a gun safe, from keeping your firearms and other valuable possessions protected from house fires and burglars alike.

In fact, getting a gun safe is a critical and yet overlooked aspect of better preparing yourself for disaster as well. This is because in the event of a serious grid down disaster scenario, the very last thing you want is for your firearms to be left out in the open.

The First Questions to Ask Yourself

Before you dive too deep into the shopping experience, there are some questions that you need to ask yourself. These include:

Here’s something you should know about gun safes: the advertised capacity of a safe is very rarely the actual capacity of the safe.

Gun safe manufacturers will often brag about their safe being able to carry fifteen to twenty long guns in it, when in reality, the safe will really only be able to hold half that amount.  Long guns will take up even more space if they either have optics or protruding pistol grips.

As a golden rule, take the advertised capacity of a gun safe and divide that number by half to get an idea of how many rifles and shotguns you should be able to fit inside.

Another important note about gun safe capacity is the manufacturer often advertises the outside dimensions and not the interior of the safe. The exterior matters for delivery and making sure the safe fits in the spot you have picked out for it, however, the interior dimensions are far more important in giving you an exact figure on how much space you got within the barrier.

Suggested reading: Top 5 Reasons To Own An AR-15 For SHTF and Major Disasters

While added fire protection is a nice feature, it does require thicker walls of the safe, which then cut into the interior surface area. So you have to decide if you would rather have more space in the safe, or more fire protection.

Last but not least, make sure that your safe has room to store other valuables as well. Examples of items besides firearms that people like to store in their safes include jewelry, money, important documents, passports, and certain family heirlooms.

Safes are constructed with different materials including steel, concrete amalgamates and RSC. Though it is not feasible to cut into the safe and examine construction material, you can get a good representation of the quality of it based on weights. General logic applies that the heavier the safe, the more heavy-duty materials were used to produce it. Therefore, it will be harder to break into.

Gun safes that are priced about the same yet have distinct weight differences are usually based on other construction features. For example, a fancy interior, chrome plating, or glossy enamel paint may account for the steeper price of a lighter weight safe. While manufacturers of gun safe can use all kinds of marketing gimmicks to sell their products, they cannot mislead customers when it comes to weight – therefore it is your best objective analysis of the quality of construction.

The more steel, the better yet also, the higher the price tag. Cheap and unreliable safes often attempt to cut corners first with steel, since the material is expensive to purchase and mold. However, steel is essential to theft protection, and the doors must be equally strong in connection to its walls.

One of the most critical factors when selecting a gun safe is the type of lock it has.

There are three common options for a gun safe lock: electronic lock, combination lock, and a biometric lock.

Electronic locks, in stark contrast, are much faster. You simply need to type in a code, and you can get inside. But the downside is that electronic locks obviously require electricity, and most are battery operated. If the battery runs out and you need to access your guns, you’re out of luck until you can replace it.

A biometric lock is similar to an electronic lock but requires your fingerprint to get inside. The main advantage here is that you don’t run the risk of forgetting a password, and there’s no possible way for a burglar to figure out the password either.

Another option is a combination lock. Some gun safe manufacturers will combine an electronic lock with a biometric one, for example, enabling you to have multiple options for getting inside.

The next important quality to consider in a safe is the fire rating, which besides a burglar is by far the most significant threat to the contents you hold within it.

As a golden rule, you should buy a safe that will withstand a fire for a minimum of a one-half hour, because this is the average length of a house fire in America (and at a temperature of eleven hundred degrees Fahrenheit).

But to be on the safe side (pun not intended), you may feel more comfortable going with a safe that will properly shield the inside contents from fire for at least an hour.

One of the most important qualities when searching for a safe, but also one that people often overlook, is corrosion resistance.

Believe it or not, but a gun safe can become harmful to the guns you store inside. This is because if moisture gets trapped into the interior of the safe, it’s going to wreck absolute havoc on the firearms and cause them to rust.

Fortunately, gun safes these days commonly come with a variety of defenses against corrosion. Examples include heating bars (which will need to be plugged into an electrical outlet), as well as copper-colored anode sheets that can be installed in the safe as well, which will become the target of corrosion rather than your guns and other metal valuables.

Did you know that gun safes actually have their own standards and burglary ratings?

You should never settle for a safe that does not at least have a UL 1037 Residential Security Container Attack Level 1 (RSC-1) rating. An RSC-1 rating indicates that the safe was able to withstand a one-man attack with basic hand tools and a ¼ drill bit for five minutes. There are higher ratings for gun safes than RSC-1.

Certain states like California also have specific legal requirements for homeowners with a gun safe. You can learn more about what rules, if any, your state has by checking with a government office.

Hopefully, by now, you have a good idea of the different qualities that you need to look for in a gun safe. Go with a safe that has each of the qualities we have covered above, and you should be good to go.