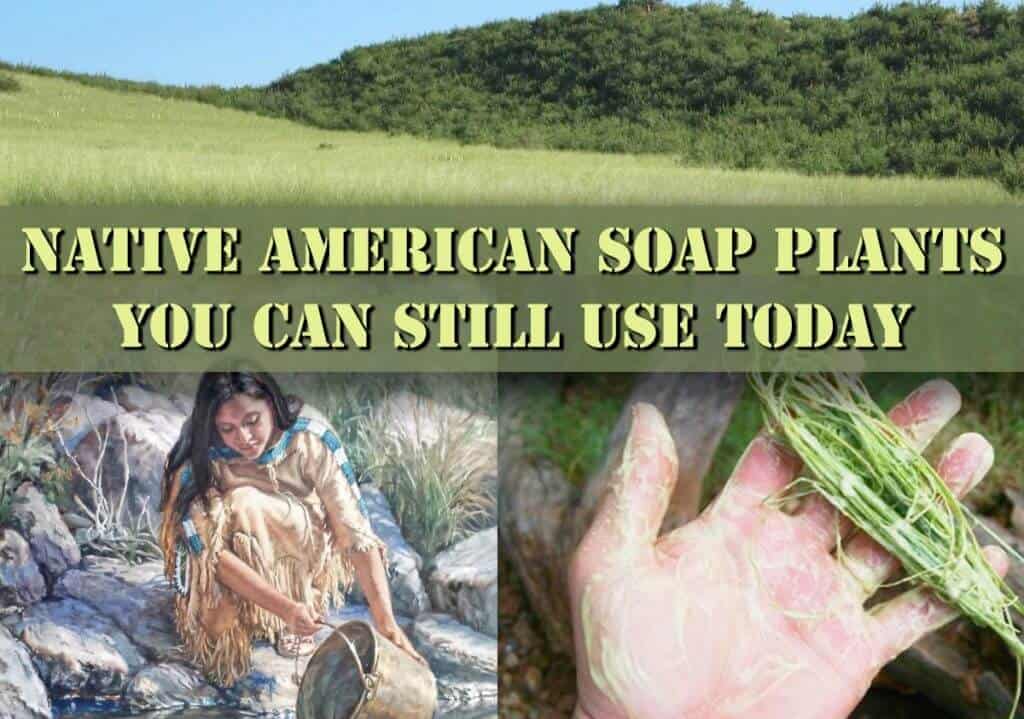 The Native Americans and early European settlers had to learn to adapt to their environment and use what Mother Nature has to offer. Sanitation was an important and challenging task back then considering that they didn’t have the commodities we enjoy today. The following Native American soap plants were used for washing clothes, but also for cleaning the hair and body.

Many Native American plants contain saponins, which are steroids that dissolve in water and create a stable froth. Plants produce saponins as part of their immune system to deter insect attack and to act as natural antimicrobials, protecting their life bearing seeds.

To the settlers, making soap was women’s work. They stored cooking grease and animal fat all year for soapmaking day, a once-a-year event that preceded spring cleaning. Ashes from the fireplaces were saved to make lye. The lye was made in a hollowed out wooden log with holes cut through the bottom to drain. The tub was lined with straw, twigs, and sticks and filled with ashes. Rainwater was trickled through to leach out the lye.

Whether made directly from the Native American soap plants or made with oil and lye, soap had its own particular virtues in the old days. Soap is one of the many items that we take for granted nowadays. If stores stopped selling this item tomorrow, we would have no clue how to make do without it. Luckily for us, there are some Native American soap plants that we can use as substitute when soap runs out. This plant is also known as soap bush, and there are over 50 species of shrubs or small shrub trees. Most of the species are confined to North America, and it’s fairly common throughout the West.

The soap bush is common throughout the southwest. If you go hiking in the spring, you will notice a spot of white, blue or purple along the trail and on the hillside.

Many species can be used as soap plants even though their botanical properties will sometimes be different. To make sure you have mountain lilac that can be used as soap you can do a simple test. Take a handful of blossoms, add water and rub them between the hands.

If you get a rich lather with a mild aroma, you got the right plant! The plant will lose its flowers early summer, and it will form some sticky green fruits. Don’t worry if you missed the flowering period of the mountain lilac. The fruits can also be used to make a rather good soap.

Related article: How To Make Soap With Fat And Ashes

Once you have the powder, add water and rub vigorously. The soap doesn’t have the same quality as the one made from the fresh fruits. However, it is still a good alternative when nothing else is available. Mountain lilac has good cleansing properties, and it’s worth traveling the difficult terrain to collect its flowers and fruits. Amole is a fairly widespread plant that is part of the lily family, and it can be identified easily due to its long liner leaves growing from the base of the plant. It develops flowers on a long stem, and it grows a large brown, tennis ball-sized bulb. To reach the bulb, which is the part used for making soap, you will sometimes have to dig down up to a foot deep.

The bulb is usually covered in layers of brown fibers. You have to remove these fibers until you reach the white bulb. The white bulb is stick and has many layers, just like an onion.

You can take some of these layers, add water and agitate between your hands. As a result, you will obtain a rich lather that can be used for any sanitation operation you might need.

You can use it to take a bath, to wash your hair and even to clean your clothes. You can also dry the bulb for later use, but just like for all other Native American soap plants, the soap made from the fresh parts is far superior.

The bulbous root of the Amole plant can be dug year-round if you know where to look for it. In the fall the plant is dormant, and although it is widespread in various areas, it will be harder to find compared to the other Native American soap plants. Many people know this plant as soapweed, soapwort or crow soap. It is widely available since many gardeners will plant it for its pink flowers. This is an introduced plant with a little history of use by Native Americans, and it is mostly used by European countries as soap substitute. Although the leaves and the roots can be used, it is much easier to use the leaves since it will also help maintain the plant alive.

There are various ways you can use the leaves to make soap. You can agitate the fresh leaves between your hands with water, or you can boil them to produce a lather liquid that can dissolve fats or grease. Take a handful of fresh leaves, bruise and chop them for 30 minutes in 1 pint of water. Strain the liquid and use it as you would use liquid soap.

This plant has satisfactory cleansing proprieties, and it is a good alternative if it grows abundantly in your area. You can plant it in your off-grid garden as a useful ornamental and use it as soap substitute year round if no snow has fallen. This plant can be found in the central and southwestern United States and northern Mexico, and it even grows in vacant urban lots. Some people knew it by the name of coyote melon and based on its form; you can notice that it is a relative of squash and pumpkins.

The Native Americans used the plant as rattles, but also as soap for washing clothes. To make soap, they used the tender growing tips or the leaves of the plant. Adding water and agitating between the hands will result in a frothy green lather that has satisfactory cleansing proprieties.

If you decide to use buffalo gourd to make soap, you have to handle the leaves with care as they are covered with tiny rigid spines. These tiny hairs are known to irritate the skin for some people. This is one of the Native American soap plants regarded as a last resort by most survivalists. Yucca is one of the most common Native American soap plants, and it has many other uses besides helping you stay clean. There are numerous species of yucca spread throughout the plains and western States. This is one of the arid edibles I wrote about in a previous article. This plant is quite easily identifiable, and you don’t need to be an expert forager.

The plant produces a stemless cluster of long, rigid leaves which end in a sharp point. The leaves are 8 to 35 inches long and have a gray-green color. This is a versatile plant, and the Native Americans used it extensively for various purposes.

Besides being one of the most famous Native American soap plants, the plant produces several good foods, quality fiber that was used to make sandals. It was also used as tinder, and it helped to improvise carrying cases or quivers from the mature, hollowed-out flower stalks.

Suggested reading: How To Deal With Laundry In Survival Or Primitive Situations

Although many prefer to use the root to make soap, digging up the root is an intense labor. You may even get fined for doing so because some Yucca species are listed as endangered. To make soap easily, you can cut the leaves (even one would do) and strip them into fibers until you have a handful of very thin strands. Add water and agitate between your hands until soap forms. You will need to pay attention when cutting the leaves because you can hurt yourself with the sharp tips or you can slice your fingers on the edges of the leaf.

Make sure you snip off the sharp tip before you strip the leaves. Yucca soap has extremely good cleansing properties, and the leaf fiber helps in scrubbing. It provides medium to rich lather depending on the species. However, since the leaves are available year-round and the plant is widespread it makes Yucca one of the Native American soap plants that can be used the most.

Discover the lost ways of living of our ancestors

Learn how to Safeguard your Home for when SHTF