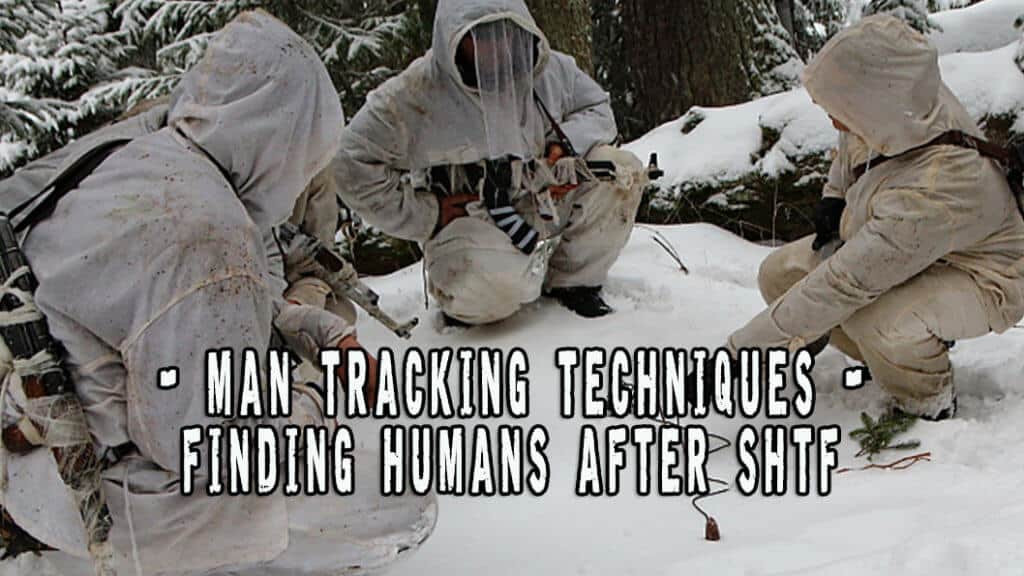 Man tracking is quite different from animal tracking, and it’s much more difficult to find someone who doesn’t want to be found. Humans have the ability to conceal their tracks, and you need tactical tracking training to be able to find people who went into hiding. Here are a few man tracking techniques to help you find fellow humans after a disaster.

Man tracking is also known as combat tracking. Humans have relied on it for locating a person by following the signs left behind. Much of the man tracking style was adopted from the Native Americans, and it was improved over time.

Many of the tracking skills we know today were passed on to the pioneers by the Native Americans, and it is well known that the U.S. Army made good use of their skills. Tracking is one of the ancient skills they used to find and hunt the animals that would help them survive through harsh times. It also helped them during reconnaissance missions throughout territories owned by rival tribes. They were able to operate alone or in small teams capable of working for weeks in the bush. Man tracking evolved when the pioneers settled on their territories and became a very active way of preventing dangerous encounters. Man tracking relies on noticing what is out of context in nature or the surrounding environment. You have to spot what is different in your surroundings, and you need to understand the cause behind the disturbance. You need to find signs of human activity and tracks.

While this may be easier to be done in an urban environment, the situation changes when nature comes into play. An urban environment will become a death trap if resources are depleted. Most people will move to remote locations to survive while other will go for the woods. Tracking those last survivors becomes a difficult operation if you’re not familiar with the following man tracking techniques.

There are two basic kinds of spoor that every tracker should look for: ground spoor and aerial spoor. As the name implies, the ground spoor can be defined by any sign found on the ground. Footprints, burn marks, vehicle tracks, blood stains, overturned ground or rocks, all these are examples that would indicate the presence of a ground spoor. Aerial spoor can be defined by any sign that is above ground. Things such as broken bush, trampled vegetation or blood stains on foliage are all good examples.

Man tracking signs to look for

These are obvious signs of ground spoor that form a distinctive pattern. Footprints in the mud or along sandy rivers are a good example. When you spot the pattern of a boot or shoe or tracks from a vehicle, you can be certain of human presence. Patterning can be caused by other objects as well, and it’s not only related to footprints or vehicle tracks. Canes, walking sticks and even rifles butts used as crutches can leave distinctive patterns.  Any surface that can capture an impression is known as a tracking trap.

Man tracking becomes easier when your target affects the environment. Overturned rocks can point you in the right direction as they leave the dark side up and the impression on the ground from their initial position. Plant leaves that have been broken or knocked off branches are a clear sign of movement.

Even bent grass can reveal the direction of movement, and the top of the grass will always point to the direction of travel. Grass blades will remain green for about a day after being broken. However, it is not a guarantee, and hot air and intense sunlight will shorten this time drastically. Pay attention to broken spider webs and cobwebs. It will help you spot the direction of travel, but it can also help you establish the timeframe of travel. If a spider web is broken, it will take 1 hour for the spider to repair its web.

Aerial spoor is damage and disturbance to vegetation created by the passage of the target through it, from foot to head height. Bent or broken branches are a clear sign of aerial spoor. Other examples of aerial spoor useful in man tracking are skinned bark or knocks and twisted or dragged vegetation or vines. When looking for aerial spoor, one general rule is to look for vegetation out of balance with surrounding vegetation.

As a tracker, it is important to master aerial spoor when man tracking is the main drive. You should be able to see, touch and smell aerial spoor as it ages and learn its variation in different types of vegetation. Some plants are fragile while others are quite resilient. Some plants will bruise easily, others will not. Certain plants will break and wilt during the day and then rehydrate overnight as a result of absorbing dew or very moist air.

If you have a river, you can walk in water along the stream to avoid detection. However, you should always pay attention to your every step to avoid leaving tracks. You will transfer water on rocks or the ground and show others where you are going. Man tracking becomes easier when your target is injured or makes mistakes without even realizing it. Blood and urine on vegetation, trees and the trail are a telltale sign. Carrying a wounded person can leave drag marks. Food waste and wrappers, clothing and human feces area also dead giveaways during a man tracking operation.

And last but not least, if you happen to track someone back to a resting area or camp you will hit the jackpot. You can check the campfire’s heat and establish any sign of recent activity, but you can also identify how many members said the party has, their gender and the gear they are carrying.

Man tracking challenges and how to overcome them

Man tracking is an operation which requires tremendous concentration and effort. The pressure can be high when the time is against you and lives are on the line. You need to be well-rested and in good shape, if you want to stay on the spoor. Tired people make mistakes, and they may end up losing the spoor. Since you cannot track people endlessly, you need to make your man tracking operation a team effort. You can also rotate trackers, and you can get better results when losing the spoor.

Suggested article: Bugging Out Without Leaving A Trail

How to relocate the spoor

If you want to learn the art of man tracking, I should warn you that you will lose the spore at some point. This is a guarantee, and even the most experienced trackers will experience this. When that occurs, you shouldn’t panic, and you should go back to the last positive spoor you found and mark it.

You can then look up to 20 yards ahead and sweep visually from center to left out about to 45 degrees and then back to the center. Repeat the process to the right, each time going back to your feet and the marked spoor. Take your time and look carefully. If you don’t rush or panic, you should be able to pick it up again.

If that’s not the case, you need to involve other people from your party or trackers from your team. There are a few methods you can use to relocate the spoor through a team effort.

Methods to relocate the spoor:

The tracker has to make ever-increasing circles from his marked spoor to his point of origin.

The tracker needs to move laterally from the sport, either left or right at a predetermined distance. He then doubles back towards his original line of march. Each time he turns, the tracker advances forward a step before doubling back.

Each half of the tracking area is boxed off and examined on the two sides of the last known spoor.

Man tracking requires a lot of patience and effort. You will not become a tracker just by reading about it, and you need to practice on the field. The more you practice, the better the odds of learning how to identify spoor and tracking it. Man tracking requires experienced supervision if you want to learn this skill. Looking at the ground and natural surroundings are just the first steps. To become a good tactical tracker and master the art of man tracking you need SERE training and a lot of practice. Man tracking is not only about finding a footprint on the ground; it is about reading the story behind that footprint and the surrounding area.

The easiest solution to produce food during a water crisis