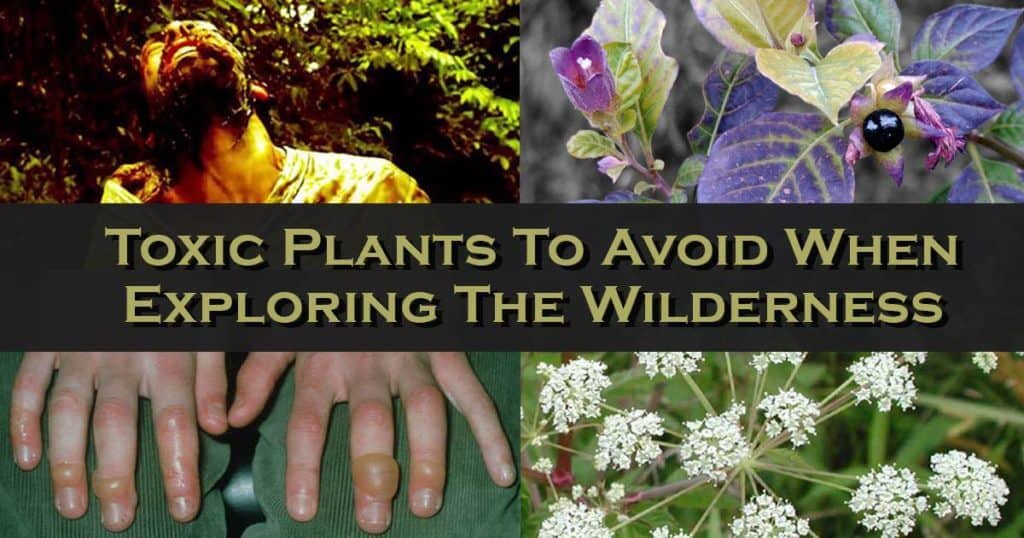 In the previous article about toxic plants, we learned about the most common noxious plants that won’t kill you, but will definitely hurt you. Today, we’re going to move forward and learn about the toxic plants that can scar you for life or put you in the ground. Some of these plants are far more common than one would think and you better keep your eyes open if you don’t want to have an accidental encounter that can send you to the hospital.

Today, only a few societies are known to use foraging techniques to sustain themselves, yet the art of foraging is neither lost nor unrewarding. However, before you pick plants to eat it’s better to first learn about the plants that can harm you. The type of plants that could kill you in a couple of hours if ingested or that can send you to the hospital if touched accidentally.

We believe that something wrong won’t happen to us and we are used to creating our safe environment that can provide us with comfort and everything we need. However, you can’t really stop Mother Nature, and the plants listed in this article may grow in your area without you even knowing it.

And you may not have to look as far as you may think. Chances are, your own backyard or property holds some of them and you probably had no idea how harmful these plants are.

As the name implies, this plant grows near water sources and love moist ground.  Water hemlock can grow up to 5 feet tall and it can be It can be biennial or perennial, with a short lifespan. It has double compound leaves with 3-7 leaflets per leaf. The leaflets are elliptic to ovate. The compound leaves are alternate on thebranch, and the leaf size varies, the lower leaves being larger than the upper leaves. It has multiple groups of small, white flowers that grow in umbrella-like clusters. It can be found all over North America in wet areas where the soil is always damp. The problem with this plant is that most people often mistake it for wild carrot (Queen Anne’s Lace) and this makes it dangerous for novice foragers. Since water hemlock also grows in urban environments, if you see this plant in your backyard, burnt it immediately.

Water hemlock is known as the deadliest plant in North America and this is why it’s at the top of our toxic plants list. Eating it can cause frothing at the mouth, muscular twitches, rapid pulse or breathing, tremors and violent convulsions. All these symptoms will lead to death in a couple of hours.

If you get in contact with this plant, you should seek medical assistance immediately. Even more, if you ingested it, you will require a gastric lavage and ingestion of activated charcoal to absorb the toxins. When convulsions appear you will need to use barbiturates to calm your nervous system. In the field, there’s nothing more you can do other than trying to emptying your stomach and using activated charcoal after that.

Don’t let yourself be fooled by this name as this plant is also called the deadly nightshade and it’s one of the most toxic plants out there. This is a perennial herbaceous plant in the nightshade family Solanaceae native to Europe, North America and Western Asia. It often grows as a bush, but it can also be seen as a small tree that can grow up to 6 feet tall. It has ovate leaves with serrated ages that can grow to 7 inches in length.  The bell-shaped flowers are dull purple with green tinges and faintly scented.

The fruits are berries, which are green, ripening to a shiny-black, and approximately 1.5 cm (0.59 in) in diameter. The berries are sweet and are consumed by animals that disperse the seeds in their droppings, even though they contain toxic alkaloids. In ancient times it was used as an anesthetic and poison. The Romans used it as poison mixed in beverages to get rid of their enemies while the Native Americans used it to make poison-tipped arrows. An interesting fact about the name which means beautiful woman in Italian is that this plant was used in eye-drops by women to dilate the pupils of the eyes to make them appear seductive

Belladonna is one of the most toxic plants found in the Eastern Hemisphere, and when its ingested increases risk in numerous clinical conditions such as pupil dilation, sensitivity to light, blurred vision, tachycardia, loss of balance, staggering, headache, rash, severely dry mouth and throat. However, that’s not all, and it can cause complications of pregnancy, cardiovascular diseases, gastrointestinal disorders, and psychiatric disorders, among others

If poisoning involving Belladonna occurs, you will need to get medical help immediately. The antidote for belladonna poisoning is physostigmine or pilocarpine, the same as for atropine.

Also known as May apple, this is a common plant in the North American woodlands. It is widespread across most of the eastern United States and southeastern Canada. These woodland plants are typically growing in colonies derived from a single root and the height of the plant is usually in the range of 6 to 10 inches.

The plants produce several stems from a creeping underground rhizome; some stems bear a single leaf and do not produce any flower or fruit, while flowering stems produce a pair or more leaves with 1–8 flowers in the axil between the apical leaves. The flowers are white, yellow or red with 6–9 petals, and mature into a green, yellow or red fleshy fruit in May (hence the name). Mayapple has been used by American Indians as an emetic, cathartic and antihelmintic agent. They also boiled the poisonous root and used the water to cure stomach aches

All the parts from this plant are poisonous, including the roots and they should not be eaten. If ingested, vomiting and diarrhea will occur. Other known symptoms are panting, lethargy skin ulcers and coma (although rare). The ingestion of may apple can lead to death as the symptoms above will only intensify in time.

If poisoning involving May apple occurs, you will need to get medical help immediately. If that is not available on the field you should try to completely empty your stomach.

Also known as Doll’s eye this perennial plant can grow up to 2 feet tall. It has double or triple compound leaves and the leaflet shape is highly variable. The leaves are alternate on the  branch while the leaflets are opposite.  The leaves are 16 inches long and 12 inches wide with deep serrated edges. It blooms an upright raceme of 10 to 20 bright white flowers. The fruits are white berries with a black dot on red stems in clusters. Stranded hikers have made the mistake of picking and eating these berries and they never made it back to camp. While the fruits may seem appealing, they are quite toxic.

Both the berries and the entire plant are considered poisonous to humans. Just by touching the berries can cause blisters on the skin. The berries contain cardiogenic toxins which can have an immediate sedative effect on human cardiac muscle tissue, and are the most poisonous part of the plant. If you eat the white berries, it can lead to cardiac arrest and death.

Just like for the other plants listed in this article, self-medication is not possible and should be avoided if white baneberry is ingested. Seek for medical help if you eat the white berries and empty your stomach to increase your chances of survival.

Also known as digitalis, these herbaceous perennial is native to western and southwestern Europe and it is also naturalized in parts of North America and some other temperate regions. Foxglove is an herbaceous biennial or short-lived perennial plant.

The leaves are spirally arranged, simple, 3.9–13.8 in long and 2–5 in broad, and are covered with gray-white pubescent and glandular hairs, imparting a woolly texture. The foliage forms a tight rosette at ground level in the first year. The flowering stem develops in the second year, typically 3.3–6.6 feet tall, sometimes longer. The flowers are arranged in a showy, terminal, elongated cluster, and each flower is tubular and pendant. The flowers are typically purple, but some plants, especially those under cultivation, may be pink, rose, yellow, or white. The inside surface of the flower tube is heavily spotted.

Foxglove poisoning can cause vomiting, nausea, diarrhea and it can seriously impair your vision. It can also cause abnormal hard rate, cardiac arrhythmias, tremors, seizures and it can eventually lead to death.

If you get poisoned by foxglove, you should seek medical assistance as soon as possible. Avoid emptying your stomach since this will only weaken your body and will lead to your collapse.

A final word on toxic plants

You may read that some of these plants were used as medicine by the Native Americans and the first pioneers, but that wasn’t an exact science. You should not try your chances with this plant and look for safer alternatives.

Be prepared and stay safe out there!