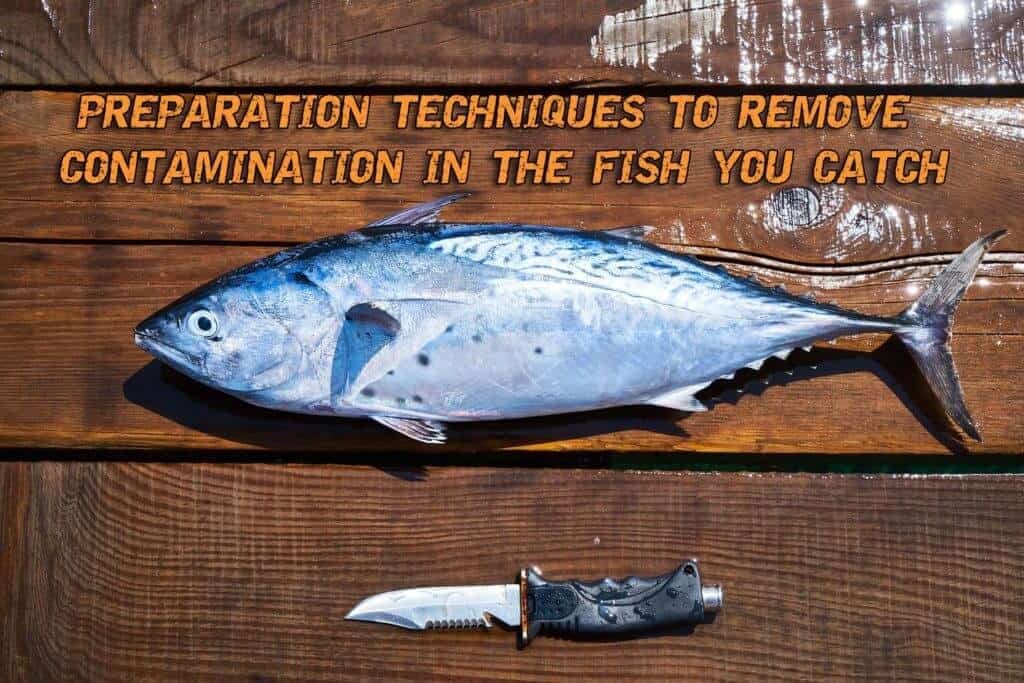 Enjoying a quiet fishing session in the wilderness and admiring the colorful surroundings is the best relaxation technique I can think of. Cooking the fish you caught is also a pleasant experience, but there are a few things one needs to know before feasting. To be on the safe side, you should be able to remove pollution and contamination in the fish you catch. Otherwise, your outdoor adventure can take a turn for the worse.

Contents hide
1 My latest fishing experience
1.1 Related article: Improvised Fishing Techniques For Tough Times
2 A polluted world
3 A little bit of research
4 Contamination in the fish you catch
4.1 Suggested reading: Shoreline Survival Tips – Staying Alive Near The Sea
4.2 Generally speaking, the varieties of fish at each level are:
4.2.1 LITTLE:
4.2.2 MODERATE:
4.2.3 EXTREME:
5 Filleting
6 Cooking
6.1 A last word on removing pollution and contamination in the fish you catch
7 Useful resources to check out:

The other week Dan Mowinski and I dropped a couple of worms in a farm pond near his home. Dan’s strictly a cane pole guy, never used a spinning rod, probably never will. Some phobia, I suppose, but I don’t question Dan, and he never makes me apologize for being weird. So, while I flipped my annelid into the far reaches of the pond. Dan dropped his bait just a few feet offshore. In this way, we covered a lot of water, and it wasn’t long before Dan’s rod was bent double. A fat smallmouth took one leap and left the pond forever.

I hefted the five-pound bass into the air to show Dan’s neighbor as he approached us on his ATV. He came to take a closer look. “You boys ain’t planning to eat that thing are you?” He said, curling his nose up like some meat and potatoes gourmet. “I believe we are.” I said a bit defensively.

He pointed to his tractor, far away in the distance, where two large fiberglass drums were cradled over a fancy spraying machine. “I’m putting herbicide down on my beans. I suppose some of it gets washed into the pond. I’d think twice about eating any fish out of there.”

“Are you telling me this fish is contaminated?” questioned Dan. His neighbor pointed to the fish. “Well, by the size of that thing, it’s been around a while. Maybe it was here when my dad sprayed poison on this land … You know, DDT, mercury, chlordane . . . stuff like that. I’ve been using some new stuff, but it still kills. What’s left over gets washed into this pond. So if I was you, I’d give that fish a proper burial and eat steak tonight.”

Well, we ate the bass. Probably shouldn’t have. But it seems when Dan and I get together, there’s a kind of synergism . . . What’s dumb about us gets double dumb. It was the worst fish I ever tasted. I don’t know if it was the pollution or a mistake in the barbecue sauce. As we sat there next to the campfire, forcing down the last bite, I kept thinking about all the terrible things I put into my body. I started wishing humans didn’t know so much.

Just take the agrichemical business, for example. Since World War II, we have developed and dumped a massive bath of exotic chemistry into our wet places. These “miracle” compounds catapulted American agriculture to world prominence. Herbicides and pesticides, in particular, are such effective tools that farmers now produce far more than ever before. This unchained productivity has kept the American food bill low, but there is a hidden cost for this horn of plenty—the birthing of a toxic wasteland.

Yes, too often, you and I are fishing contaminated water, possibly taking fish, clams, and other organisms that are laced with lethal toxins.

A little bit of research

What’s worse, there is new evidence that herbicides and pesticides, as they trickle toward the watershed, may contaminate cattle and dairy products. But at that time our concern was fish. So for some straight answers, we went to see a close friend who’s a limnologist. He loaded us down with research. After hitting the books and journals, Dan and I came up with several ways to prepare fish, so they are safe to eat … polluted or not.

But before the good news, some more bad news. There are few skeptics who believe all fish are safe to eat, for them, let’s review the facts. Limnologists and marine scientists across the world report an alarming rise of pollution and contaminants in fresh and saltwater fish.

Perhaps like some people you think that cancer and what causes it has always been around—an inevitable background effect—and there is nothing that you can do about it. People have been warned not to eat fish from sources being polluted. Preliminary evidence strongly suggests that most fish ending up on our table contain plastic micro particles and heavy metals.  While there may still be environments less polluted, it’s a safe bet to know how to remove pollution and contamination in the fish you catch

Contamination in the fish you catch

The red gallery of contaminating chemistry includes industrial wastewater, PCBs, mercury, lead, dioxin, arsenic, etc. After fulfilling their prescribed roles, they trickle down from factories and fields into our nation’s lakes, streams, and intercoastal areas. They are long-lived, extremely toxic in concentration. As they come to rest on the floor of the bay (lake, river or stream), they mingle with the nutrient broth that feeds plankton. Contaminated phytoplankton and zoophytes are devoured by fry and feeder fish.

The poisons accumulate, concentrating in organ tissue, skin, lateral lines, fatty layers, and flesh. Then, larger predators eat the smaller fish, the toxins are passed on—now more concentrated, more lethal. Finally, you come on the scene and catch and kill a fish. After eating the carp, sucker, flounder, sea bass… (name your poison), the carcinogens dead end in your organ tissue.

There they begin their dirty work. Pregnant women and growing children are most vulnerable. Our Federal government is trying to assess what waters have reached dangerous levels of contamination. They are surveying and extracting benthic (bottom) samples along with coastal areas nationwide. As evidence mounts, it appears little of America’s water resources remain pristine. Toxic sediments and diseased fish have been found from Florida to Minnesota.

Given all the bad news, what can be done to make your catch safer to eat? There are a few food preparation techniques that can eliminate much of the contamination in the fish you catch and eat. Be advised, fish from bottomlands and end point drainage systems (where rivers and sewers pour into the sea) are potentially most dangerous. Mountain lakes and high altitude streams are safest.

Fish may be contaminated at one of three levels: little, moderate, or extreme.

Generally speaking, the varieties of fish at each level are:

Smelt, panfish, grunion, mountain trout, and secondary predators under one pound in weight are safest to eat. Other oceanic species, legal targets of the hunting diver, are generally safe—if they do not feed in bays, near large coastal cities, inlets, and river mouths where contaminated wastewater spews into the ocean. Unfortunately, many divers, limited by water depth, hunt in the very areas they should avoid.

Primary predators over three pounds and bottom-feeding fish are as a group potentially most toxic—especially if they have been feeding in extremely contaminated water. Because most toxins are located in the oil, fat and organ tissue of fish, a few filleting and cooking techniques eliminate most of the danger.

What follows is a preparation ritual that makes your catch safer to eat.

First, do not eat any organ meat, tongues, or checks of fish. Second, gut the fish, and cut away all belly fat. Third, fillet the fish, remove the skin, cut out the lateral line, and cut away any fat around the dorsal fin. Fourth, remove any other visible fatty tissue.

Among all the things I have described here, filleting a fish is the hardest. It requires both skill and the right tools.

You must have seen Gordon Ramsay showing off his filleting skills on YouTube. Now, half of that skill comes from the premium tools he uses. You have to know your fish and your tools. A filleting knife is the most important here.

The type of knife can vary with the type of fish. Like you have saltwater fillet knives for saltwater fish. The knife should be short and flexible. The blade should have enough flex to make the work easier. Flexible blades will easily follow the shape of the fish and give you a clean cut.

The size shouldn’t be more than 6-7 inches. Yes, you want a short one for filleting because it helps you have better control over the cut. To support that control, you need an ergonomic handle with a strong grip. Lastly, the blade should be sharp as hell. Because you don’t want to cut twice in the same spot.

If you got the knife then follow the instructions I have given earlier. Remove skin, trim the fat, and don’t eat the tongue.

CAUTION: If your fish is over three pounds, and you speared it in potentially polluted water, chop the meat into one-inch cubes (chicken bits style). Drop the cubes into a colander, or wrap them in cheesecloth (even a clean tee-shirt will work). Then use your hand to twist, squeeze, and push as much oil as possible from the fish.

BROIL the fish, especially oily fish. Fat and most toxins will drip away.

Oriental style, Chinese wet cooking is a clean and effective way to prepare fish. Put a pan of water on the coals. Season the water with dill, white wine, and soy sauce. Place a grate over the pan. Arrange the pieces of fish on the grate and close the lid on your grill. The steam cooks the fish and flavors it. The toxic fat drips away. In the field—where you don’t have a grill—pour water and spices into a pan, then lay your fish on a metal steamer basket. Place the basket in the pan, as if you were steaming vegetables, set the pan on the campfire coals.

PLANK STYLE cooking is my favorite. Split a six-inch log in half. Spread the fish fillets on the log, and set the log near the fire. The fish is slow cooked, smoked … and the fat drips away.

OVEN BROILING is also recommended, especially if the fish bits are elevated on a rack, so fat can drip away.

POACHING removes oil from a fish, albeit the meat floats in the water bath of oil and possible toxins.

FRYING AND SAUTEING are the least desirable ways to cook potentially contaminated fish. If you must cook your catch in this manner, never use the oil twice. Throw it away after every meal. Drain and dab the meat dry before eating it.

By preparing your fish in these prescribed ways, you may eliminate most toxins from the animal’s flesh. But what of the greater problem, the continued dumping of contaminants into our nation’s water supply by agriculture and industry.

What can be done? A warning to the population consuming fish from polluted water sources is the first thing.  The biggest and most difficult step to achieve is to cut down pollution levels as much as possible. Unfortunately, in my personal opinion, I think we can no longer achieve this as 3rd world countries have no restrictive laws against pollution and we passed the turning point.