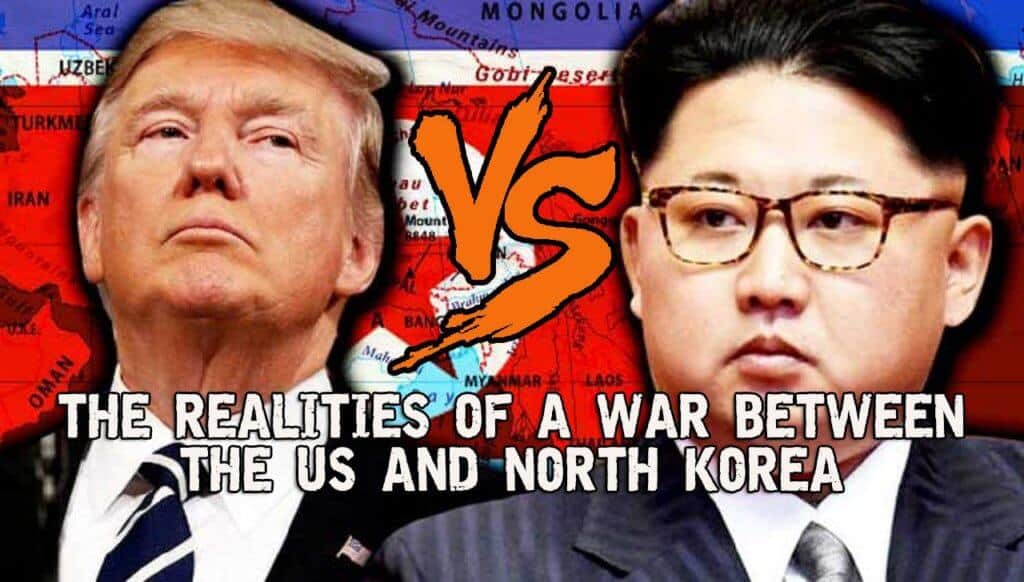 Tensions between the US and North Korea have reached unprecedented levels after the Pyongyang regime announced it has successfully tested a hydrogen bomb in September. The blast triggered an earthquake of magnitude 6.3 and South Korea urgently reunited the security council to discuss the north threat. A war between the US and North Korea is not a far-fetched scenario seeing how the two leaders are acting.

The first target on the list of dictator Kim Jong-un is the island of Guam, an American territory in the Pacific Ocean. To the many challenges of North Korea, US President Donald Trump said that Pyongyang would be hit with “fire and fury” if he doesn’t stop with his threats. Several sources from the Trump administration said the president had already presented his military options against North Korea.

Contents hide
1 The Facts:
1.1 Can the US try a precision hit?
1.2 When could Kim Jong launch a nuclear attack?
1.3 Which country has the biggest Army and military advantage?
1.4 Is change of regime an option in North Korea?
1.5 What would be the economic consequences of a war between the US and North Korea?
1.6 What other options do the US and North Korea have at their disposal?
1.6.1 Other Useful Resources:

Can the US try a precision hit?

It has been talked about the possibility that the US could hit North Korean military centers and destroy the Pyongyang nuclear weapons before they have time to use them. But such a scenario is not realistic: ballistic missiles and nuclear weapons storage facilities in North Korea are dispersed and hidden throughout the country.

Failing to hit all these points in an organized coup would then mean that 10 million people in Seoul and 38 million in Tokyo, as well as tens of thousands of Americans in the areas that can be touched by North Korean missiles,  would be in grave danger.

When could Kim Jong launch a nuclear attack?

“Even the smallest blow to the United States could be understood by North Korea as part of a large-scale attack, which would trigger a nuclear attack,” said Jeffrey Lewis, East Asia Program Director, from the Middlebury Institute for International Studies. In other words, when Pyongyang considers that a US attack is imminent, the first consequence would be the launch of a nuclear counter-attack.

Which country has the biggest Army and military advantage?

There is a big debate on how a war between the US and North Korea will unfold. However, it’s all down to numbers and military capacity. To keep things simpler, the good people at HuntingMark made an infographic showing the largest capability by the numbers. Take a look:

Is change of regime an option in North Korea?

Changing the regime in Pyongyang would not necessarily mean a change for the rest of the world, nor for North Korean citizens. When Kim Jong-un came to power after his father’s death, many said he appreciated that the new leader, educated in Switzerland for years, would be willing to open his country’s way to the rest of the world. Not only did this not happen, but the tensions in the area grew.

On the other hand, removing Kim Jong-un from power would also mean removing everyone around him. And such a radical measure would not appeal to China, who could wake up overnight with thousands of North Korean refugees at the border, but also with American soldiers.

What would be the economic consequences of a war between the US and North Korea?

South Korea represents 1.9% of the world’s economy and is the home country for multinationals like Samsung or Hyundai. A dramatic decline in economic activity caused by a war between the US and North Korea would have echoes around the world. The stock would collapse, the price of oil would drop drastically, and the currencies in the area would devalue rapidly.

“The humanitarian crisis and economic reconstruction in the Korean Peninsula after a nuclear conflict would call for widespread international interventions led by China, the US, and the European Union. And it would take more than ten years to rebuild the economy, “says Rajiv Biswas, an economist at IHS Markit.

What other options do the US and North Korea have at their disposal?

Analysts quoted by Bloomberg argue that it is time for the two states to meet in talks and to negotiate an armistice. Shutting down North Korea’s nuclear weapon development program or even more advanced weapons would be a success, says Jeffrey Lewis. The main question is related to what might be offered to Kim Jong-un so he would be willing to give up nuclear testing, Lewis notes.

Survival Lessons from the 1880s we should all know!