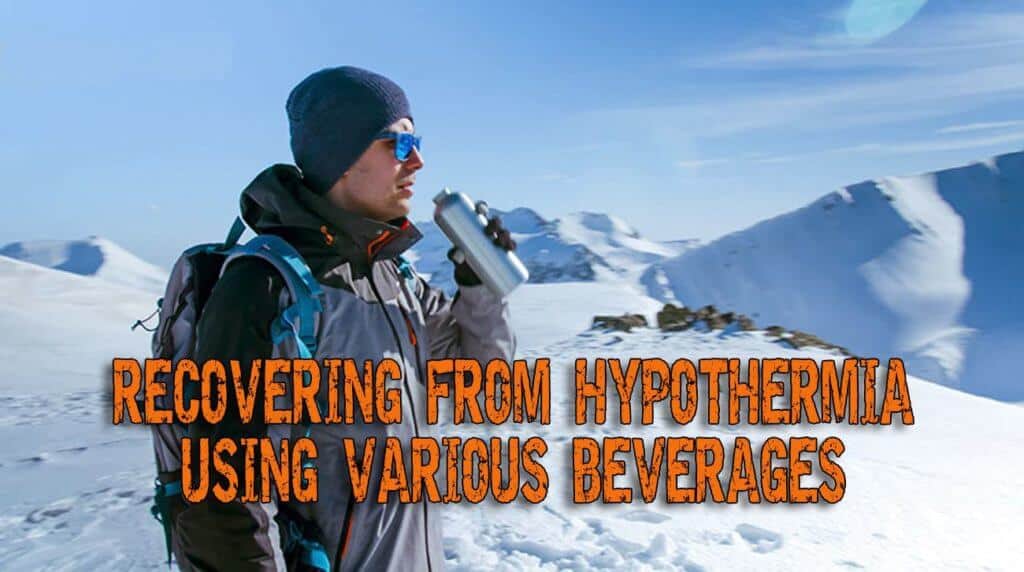 During this time of year, a lot of people are affected by hypothermia. Many of them have no idea what hypothermia really is or what its symptoms are. When people feel cold they power through as they think it’s normal and soon enough things get worse, especially if they drink the wrong beverages.

Hypothermia occurs when your body loses heat more rapidly that it can replace it. People falsely assume that it can only occur during extremely cold weather. Your body functions such as blood flow and heartbeat are affected when you are exposed to cold, but you need to figure out when your organs are in real danger.

The human body is designed to operate best at 98.6 degrees Fahrenheit. When it goes under 95 degrees F, that’s when you enter hypothermia territory.

You should learn how to identify and treat hypothermia if you want to stay safe in a cold environment. There are several levels of hypothermia as shown below:

Although recovering from hypothermia requires time, most people rush to speed up the healing process. They start drinking various beverages and abuse the quantity thinking that’s the right way to do it.

The medical advice, in this case, is to sip beverages slowly, but you need to know which ones are recommended.  There are some recommendations you need to take into account when administrating liquids to help a patient suffering from hypothermia.

This is the most encountered mistake most people make when treating hypothermia and they believe that drinking alcohol will help warm the body. This is a myth that has been perpetuated for decades and it does more harm than you think.

While hard alcohol and strong liquor will feel warm when consumed, especially in a cold environment, it doesn’t help you retain heat and warm up. On the contrary, the ingestion of alcohol pulls heat away from the body’s core. It inhibits the body from warming back up as the liver will consume a lot of energy trying to deconstruct the alcohol particles. You should avoid alcoholic beverages if you are treating hypothermia, even if it’s in the early stages.

Yes, some people drink soda when getting cold. There’s no explication behind their reasoning and we should assume that nothing else is at hand. They often choose the caffeinated ones thinking it will pick them up and boost their energy level.

However, only the sugars in the soda may be beneficial for your body. To put it in a few words, it’s not worth the tradeoff of its major negative effects. Your liver will once again try to assimilate the chemical compounds from the beverages without gaining anything in return.

This is one of the most indicated beverages for a patient suffering from hypothermia. However, it should be administrated in small quantities. It may feel great for the hypothermic person, but it won’t do too much in raising the core temperature. The real aid comes from the sugar or honey that is used to sweeten the tea.

The simple carbohydrates will help start the body’s ability to get warm. This should be your number one choice when treating patients suffering from hypothermia.

This is another one of the beverages that will do more harm than good although it’s still a preferred choice for many. It may sound like a great idea to warm up and gain some energy, but the caffeine will act as a mild vasodilator. It basically draws blood from the extremities, making a somewhat colder core. Instead of warming the extremities, it does the opposite. The more coffee you drink, the greater the damage. Avoid it.

This is my second preferred choice for warming up when camping during the cold months. The warm liquid feels good even though the actual heat from such beverages won’t do very much good to warm up the core temperature. However, the sugars, spice and fats in the hot chocolate will help kick-start the warming process.

Spice and fats you may ask? Yes, that’s not a typo and I’ve shared my recipe for coconut spicy hot chocolate in a previous article. I mix my hot chocolate with coconut oil and cayenne pepper since it warms the body in three stages. First, the initial warming comes from the hot drink itself. Second, the cayenne pepper will open blood vessels and provide optimal blood flow. And the third warming process comes from the fat and sugar metabolizing in the body. You can prepare the mix at home, you put it in your survival bag and when the time comes, all you need is hot water.

Read more about my winter trail survival foods in this article:

Hypothermia is a very real condition during this time of the year, but it can be avoided if you plan for it properly. Besides dressing in layers and bringing the right supplies and gear along, you should learn how to identify each stage of hypothermia and what to do to prevent further damage. As you saw in this article, even picking the wrong beverages to administrate a patient suffering from this affection can do more harm than good.

Now that you understand how beverages can influence the treatment of hypothermia be prepared for the cold season and make wise decisions. Even the smallest things matter and it could save you from the chill that kills.