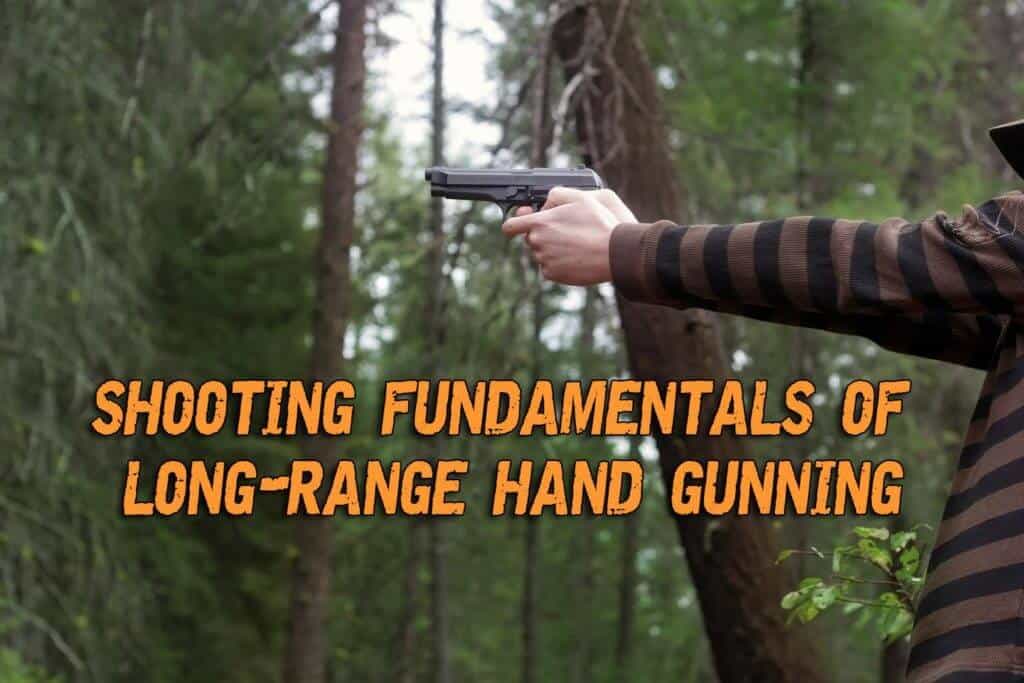 n important part of using any piece of quipment effectively is knowing its capabilities and limitations. Fire-arms are no exception. We all know that handguns are close-in defense weapons. However, what exactly are their range limitations? Long-range hand gunning is a skill that takes practice to master, and there are a few shooting fundamentals you need to learn.

Before you answer, let’s consider the two major factors that impact on this issue.

Your skill and other factors to consider

Contents hide
1 Your skill and other factors to consider
2 Enroll in a dedicate long-range hand gunning course
2.1 Related article: Six Things To Check Before Going To A Shooting School
2.2 Sure this sounds like fun, but what good is it?
2.3 Let’s briefly review the fundamentals that are so critical to long-range accuracy:
2.3.1 Stance:
2.3.2 Grip:
2.3.3 Sight Alignment:
2.4 Suggested article:Tactics And Decision Making In A Self-Defense Situation
2.4.1 Trigger Control:
2.4.2 Breath Control:
2.5 So far, so good!
2.6 Conclusion on long-range hand gunning
3 Useful resources to check out:

First and foremost is your skill as a marksman. How well have you mastered the fundamentals of stance, grip, sight alignment, trigger control, and breath control?

The second factor in long-range hand gunning is the caliber and the particular load you are using. Trajectory or the arc the bullet follows in its path to the target is generally considered to be a flat line at common handgun ranges. At extended ranges, the differences in flight characteristics or trajectories of different calibers and bullets begin to play a significant role in accuracy.

The high velocity and relatively light bullet weight of the standard .357 Magnum load give this round a much flatter trajectory than the heavy and slow-moving bullet of the .45 ACP.

While barrel length, type of sights, and type of action, i.e., revolver or semi-automatic, do play a role, it is less decisive than generally believed.

I recommend following a program for long-distance shooting, which gives you the opportunity to learn through direct experience that you can successfully engage and hit targets at ranges commonly thought to be beyond the capability of standard handguns.

Exactly what distances are we talking about when we say long-range handgun shooting? Back in the day, all my shooting was conducted at ranges between 150 and 500 yards. Some of the weapons used were  Sig-Sauer P226s and 220s, Beretta 92s, Glock 17s, Colt .45 automatics, and a few revolvers, primarily Smith and Wesson K and L frames.

Targets used were double thickness armor plate hatches measuring 22 by 44 inches, slightly larger than the standard police target silhouette. With a little practice and coaching the almost everyone at the range quickly began dinging the targets between 150 and 300 yards with direct fire.

A few of the more adventurous shooters who were willing to experiment with an offset aiming point discover that they can even hit the 500-yard target (which appears to be about the size of the head of a pin).

Related article: Six Things To Check Before Going To A Shooting School

Sure this sounds like fun, but what good is it?

First of all, you’ve increased your effective handgun range capability from 25 to 300 yards. That alone has significant survival as well as tactical implications.

Second, by practicing using indirect aiming points for extremely long ranges out to 500 yards, you’ve learned the trajectory of your weapon and ammunition.

While a few of the better marksmen have mastered the fundamentals and are able to score fairly consistent hits on the 500-yard target, many others are able to lay in what amounts to suppressive fire at that range.

If long-range hand gunning sounds like something you’d like to try, here are a few pointers: Don’t rush out to buy an expensive silhouette target pistol. You can spend a couple of thousand dollars on a customized weapon modified to your personal specifications and be extremely disappointed with its performance if you haven’t mastered the fundamentals of marksmanship.

Let’s briefly review the fundamentals that are so critical to long-range accuracy:

Many shooters use a barricade supported kneeling position for stability, but others are quite successful withstanding, off-hand shooting from the Weaver stance.

As in all handgun shooting proper fit of the weapon to your hand and the way you grip the weapon are essential to accuracy. Remember that the barrel of the weapon is an extension of your arm, and should be held in line with your arm so that the forces of recoil are transmitted directly down your arm and not channeled off through a loose or bent wrist.

A misalignment of the sights by only one-thousandth of an inch at the muzzle will result in an error of three inches at 50 yards and of nearly three feet at 500 yards. Considering how small the targets appear at these ranges, it is almost an act of faith to maintain your focus on the front sight, but it is absolutely critical that you do.

For distances out to 150 yards sights can be aligned in the normal way —top of front sight level with the top of the rear sight and equal strips of daylight bracketing each side of the front sight blade.

Suggested article:Tactics And Decision Making In A Self-Defense Situation

At 500 yards the method is different because the average front sight is simply not high enough to obtain a sight picture with the muzzle elevated to compensate for the deteriorating trajectory of the bullet. Some cartridges, notably the standard .45 hard-ball, have a trajectory drop of approximately 35 feet at 500 yards. Naturally, to be successful at this range, you will have to find an alternate aiming point the appropriate distance above, or beyond your target.

It is not necessary to shoot exclusively single action to be accurate at extended ranges. Many shooters are quite successful at long-range hand gunning using the double action feature of their revolver or semi-auto pistol.

What is critical is a smooth and steady squeeze. You must avoid staging, jerking, or any other trigger movement which is not an evenly paced continuous motion. As with grip, follow-through is important with trigger control. The bullet has a long, unguided flight and the way it is launched determines where it will impact.

We’ve all experienced the figure-eight weave as we attempt to hold a handgun steady. At close range, you may be lucky and squeeze off your shot just as the sights pass over the target. But for long-range precision, you have no such luxury. You must be absolutely steady.  Taking a breath, then letting it halfway out is an old formula, and it is still the one to follow to promote a steady hold.

We’re hitting the target, but what about the remaining kinetic energy of the bullet at these long ranges? Does the bullet retain any stopping power once it reaches the target? It’s actually frightening to consider what happens to a bullet, whether it’s a fully jacketed .45 or a hollow-point .357, when it impacts armor plate at 150 yards. Inspecting the targets after a shooting session, I collected a bag full of what appeared to be lead nickles — round and flat. They are in fact .38, .357 and .95 caliber bullets that have struck the target with so much force that they have completely flattened themselves.

Even at 500 yards bullets recovered at the base of the target retained enough energy to transform themselves into classic lead mushrooms. Now that you know what you can do with your handgun, should you get rid of your rifle? Absolutely not. Rifles are designed to deliver accurate and powerful long-range fire. But it is nice to know that you have the option available of your handgun for long-range hand gunning in a pinch.

Whether you are a police officer, soldier, survivalist or just a weekend shooter, realize and appreciate the capability of that handgun you pack with you. It can do its job far beyond the traditional 25-yard limit we have uncritically accepted for so long