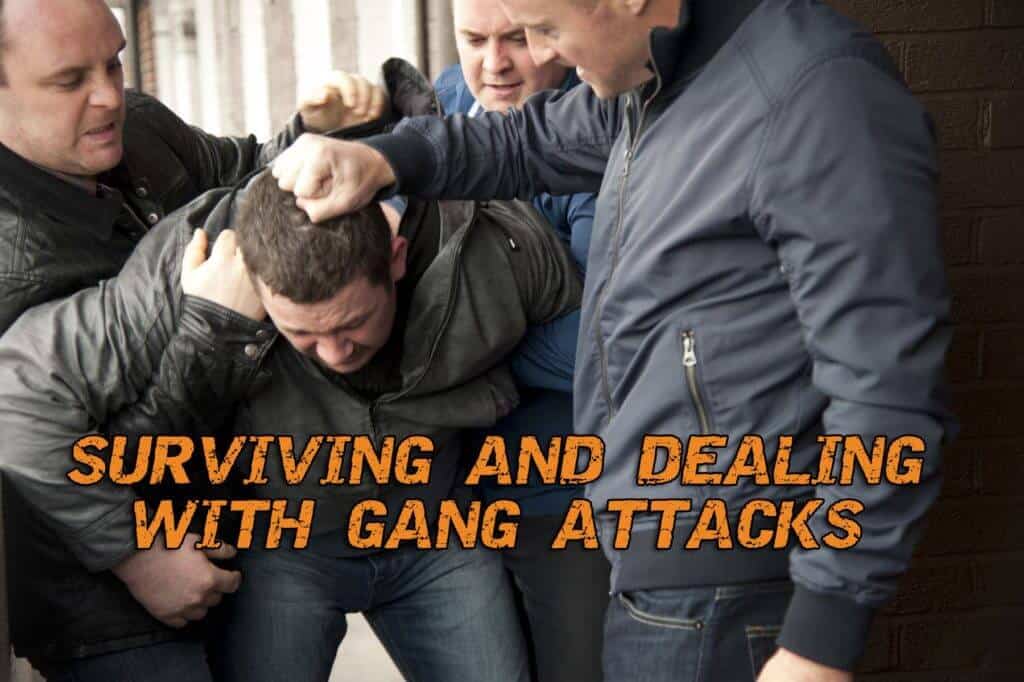 Standard martial arts and self -defense training prepares the defender for attack by one assailant, but what happens when more than one attacks? Do the same techniques and philosophies apply? Should the same theories be used? In a word: NO. Having to deal with gang attacks changes everything.

Where there was a finite number of attack angles with one attacker, that number is multiplied by the number of assailants. And when the attackers know how to work together, it increases the number of variations.

Wherewith one attacker you could concentrate on him, letting the environment split your concentration enough to know what was going on around you, with multiple attackers you need to be aware of everything: the movements of all the attackers, their relationship to each other, the environment, and so on.

Your perception has to change because you can no longer concentrate on any given thing. Your awareness must be total.

Dealing with multiple attacks demands more as well. A mistake in a solo attack can be recovered from easily and even used to your advantage. Not so in the case of more than one attacker. In this situation, a mistake can be deadly. Your techniques have to be sharper, and you have to be able to control the situation. If you don’t, it will control you.

Knowing that multiple attacks are more dangerous and demand more, what can you do to deal with one effectively? How do you prepare for such a situation?

You learn the theories behind defending yourself, then you train your techniques for use in multiple attacks, and you make your training sessions as realistic as possible to see what works. The bottom line in any self-defense situation is that you only use what works, but you use whatever works.

The greater the number of attackers, the harder it is for them to work together, and the easier it is for you to isolate, confuse, and attack. Constant movement on your part makes it harder for them to coordinate, and it helps you stay loose and as relaxed as possible.

This constant movement serves a more concrete purpose when dealing with gang attacks. It allows you to make sure that there is always an attacker between you and the other attacker(s). This will ensure that you are never attacked by more than one at a time, and you can attack the one in between just like any other defense situation because he has now been isolated.

Attack quickly and use the most devastating techniques you have. This is not the time to experiment with new techniques or to play with your opponents. You have to put them down and put them down fast. Aim for the most vulnerable areas, use strong, simple techniques, and have no mercy.

You have to make the odds in your favor, and if you are struggling with one or more of the attackers, the odds drop. You cannot afford to wrestle with your attackers. You have to strike from barely within range because if they get their hands on you, the sheer force and weight of numbers works against you.

Keep out of their effective range unless you have to come closer to deal the knockout blow. Use the environment. As mentioned above, the more attackers, the greater the number of attack angles possible.

Your job, if the environment is willing, is to cut down the number of angles. If there is a wall directly behind you, you don’t have to worry about attacks coming from behind. If you station yourself in a corner, you don’t have to worry about your back or sides. Most people would be afraid to put themselves “in a corner,” but this can actually be the safest and most effective place to defend yourself.

Let’s say there are three attackers, and you have managed to position yourself in the corner of an alley. This cuts down the effective angles from which they can attack, and makes your defense much simpler.

If they try to attack together, they will be tripping over each other because of the limited room available. When they attack one by one, which they will have to, you have evened the odds, and you can fight your way out on an even keel.

Anything that will cut down the number of angles possible should be used. Another aspect of using the environment is to be able to use any of the weapons you might find there. Use anything, a stick, a brick, a bottle, etc. to complement your natural weapons. But never let these weapons limit you. A weapon in your hand can distract your opponent effectively. Just make sure it doesn’t distract you and make you a poorer fighter because you depend on the weapon.

Psychology when dealing with gang attacks

When dealing with gang attacks, there will usually be one who is the clear leader. Recognize who that person is. Talk your way to that knowledge or just observe who is giving the orders. Once you know who the leader is, you know who you should attack first.

Because he is the leader, and if you take the leader away from the followers, they won’t know what to do. A good example of this is when a sports team loses their coach. The team usually does much poorer and often loses, because the guidance and motivation are gone.

The leader of a group of attackers is usually the motivating force. The leaders decide who and when to attack, and the followers obey. Take that motivation, that command, away, and the followers are likely to give up the fight. Having found the leader, wait for the right moment because an aggressive action will come as a surprise to the people who think they are in control, then attack.

Attack strongly and quickly, again with the techniques you do best, and put the leader down and out. Once the followers see their leader on the ground and out, they’ll think twice about continuing the attack.

Let’s review the major principles behind defending against multiple attacks:

These theories are fine when written down, but it’s impossible to really understand them unless you can experience how they work. It’s not exactly practical to go out looking for three or four large attackers to try out these theories. But there are ways to train that can inject the needed realism while still keeping things safe.

Find other people with the same need as you: to learn how to defend against multiple attackers. Assemble a core group of four or five people and set up training sessions with them.

At first, start out with drills using two against one, with everyone wearing heavy padding (striking surfaces as well as target areas). When in the heat of even a practice attack, things can easily get out of hand.

Related reading: Vital Head Points To Exploit In Self Defense

Start out slowly, recognizing the angles, and understanding how you must move in order to isolate one of the attackers. Let your partners experiment with attack strategies while you work on the methods of defense. Then switch around so that you can be the attacker. Being a practice attacker can give you insight into the role of defender and into the vulnerabilities of the attacker.

In the beginning, you’ll experience a tendency to flail and go out of control when attacked by more than one person. This is a natural reaction, one which you need to understand and control. Fighting out of control only helps your attackers, and the only way to discipline yourself and to learn to fight with control is to put yourself in these attack situations as often as possible.

Once you start to feel comfortable with two attackers, increase the number. Keep in mind that the more attackers, the easier it is for you to confuse them. Keep on the move, searching and destroying, keeping them running into each other, frustrated and unsure.

This actual practice is vital because it allows you to experience the situation without actually having to place yourself in danger.

Taking this one step farther, don’t always practice in a gym or dojo. Go out into the real world and put yourself and your attackers into as many real situations as possible. Your mind, like a computer, benefits by these experiences because it will file it all away for future reference. Even if you aren’t attacked in the exact place in which you’ve trained, there will be some similarities from which you can draw.

The more you experience, the more comfortable and in control, you’ll feel. So, practice in a dark alley. Go outside and start the attack in the middle of a field. Try different things and see what works and what doesn’t. Practice time, when you can laugh at your mistakes and start again, is the time to make those mistakes.

On your own, drill your kicks, punches, and strikes at all angles. Attacks don’t come only from the front. Be able to fire your techniques anywhere at any time in any combination. Train to reduce the time between seeing where the opening is and action. Set up targets that are at awkward angles and practice hitting them. This will help stimulate the split in perception/ awareness you will experience.

Arrange the targets in any way, and practice going through hitting them with speed, power, while keeping yourself in balance and control. Remember, gang attacks are not the place to make a mistake. Your techniques have to be at their best, and that means practice, practice, and more practice.

Practice on your own, practice with your attack group, and practice in “real” environments.

Gang attacks with multiple attackers change all the rules. Just when you thought you had this self-defense game figured out, multiple attacks come along, and another set of rules apply.

Still, once you master these theories and practice them in application, you can defend yourself against any number of attackers.  Just deal with them one at a time and you will survive most gang attacks.

Combat training that can save your life when SHTF