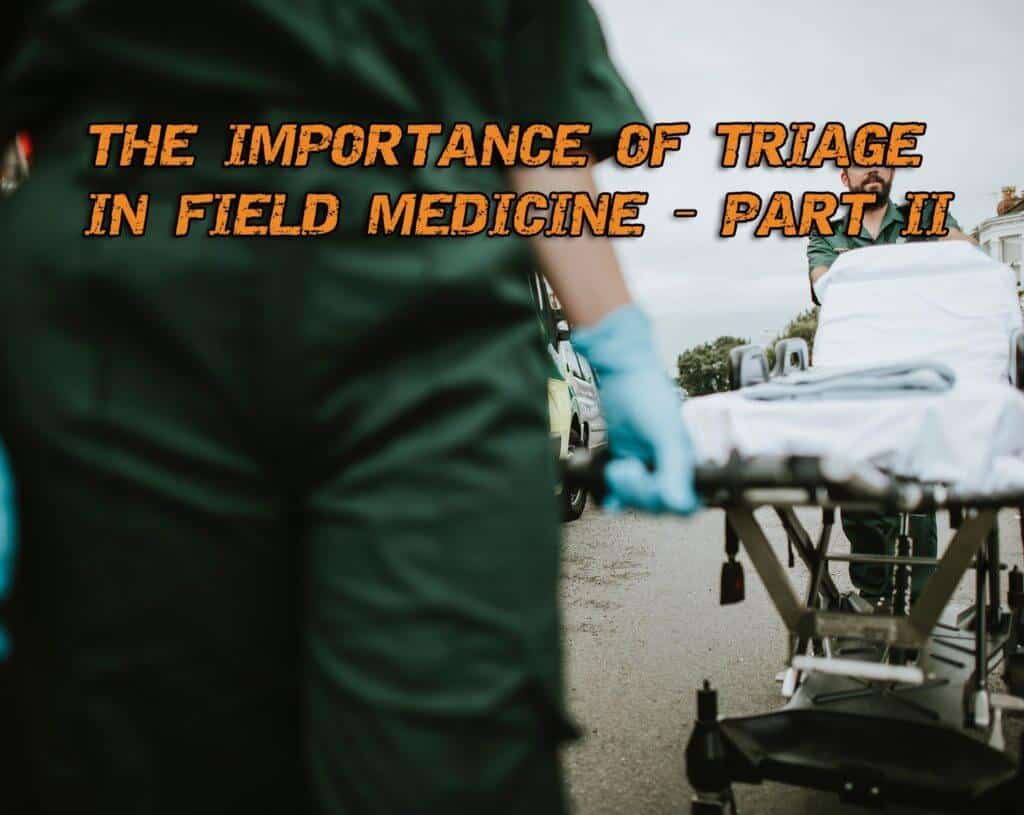 Simple triage is usually used in a scene of an accident or “mass-casualty incident” (MCI), in order to sort patients into those who need critical attention and immediate transport to the hospital and those with less serious injuries. This step can be started before transportation becomes available.

Upon completion of the initial assessment by physicians, nurses or paramedical personnel, each patient may be labelled which may identify the patient, display assessment findings, and identify the priority of the patient’s need for medical treatment and transport from the emergency scene.

Following with the stabilization procedures:

In triage, the next priority in stabilizing a trauma casualty is to arrest any serious hemorrhage that may be occurring externally. This concern is next in priority provided shock from blood tom is not far advanced. Deep shock often causes a cessation of external bleeding, therefore immediate hemostatic procedures take a back seat to rapid shock treatment with intravenous infusions.

As the casualty responds from shock, bleeding from wounds may resume alarming proportions.

Classifications of bleeding from wounds.

1. Arterial bleeding occurs in spurts synchronous with the pulse of bright scarlet-red blood. Exsanguination from a large artery wound can take place in live minutes or less, necessitating rapid intervention to preserve life.

3. Capillary bleeding is intermediate in tailor and oozes from the wound. Large abrasions can result in a significant amount of blood loss.

The best and most easily applied method for arresting external bleeding is the application of pressure to the bleeding point. This is achieved most effectively where a blood vessel  over-lies a bony area and is relatively near the surface. Usually, a sterile dressing is used to apply manual pressure to the wound, but a bare hand can be used in an emergency.

A traumatic wound is already one laminated, and most organisms on the human hand are of low pathogenicity. Aftercare, consisting of wound excision and antibiotic therapy, will treat any infection caused by unsterile hands.

Under certain conditions, bleeding may continue from a wound despite the firm application of pressure. In this event a large and deep situated blood vessel is probably wounded. This situation calls for application of a snug pressure dressing held in place with a stretchable bandage. If the dressing becomes blood soaked it should be reinforced by the application of more dressing material.

Serious hemorrhage from arteries and veins can almost always be arrested by the application of a pressure dressing. The pressure on a bleeding point must be maintained for at least five minutes. The temptation to look and see if the bleeding has stopped must be restrained, as frequent removal of the pressure disturbs clot formation.

If, after five minutes of manual presasure bleeding continues, a pressure wrap should he applied. If this fails to adequately control the bleeding, more definitive measures may be necessary. Wound packing and the application of tountiquet are last resort measures for arresting serious external bleeding.

Wound packing is generally required in a situation where effective pressure cannot be maintained because of anatomic locanon. In this event, sterile gauze tampons are used to directly exert pressure against the bleeding point. Unless wound packing it done properly additional trauma may be inflicted on an already damaged blood vessel.

The possibility of the introduction of virulent disease organisms deep into the wound must also be considered. Wound packing should never be employed by anyone unless they are thoroughly familiar with the technique. Packing can only control bleeding for a few hours if a large vessel is injured.

The application of a constricting band around an extremity to arrest bleeding is the most misunderstood and abused hemostatic measure. Frightening arterial bleeding often provnkes a first aid person to apply a tourniquet. It should he realized that a tourniquet arrests all blood flow through an extremity.

Unless the application is properly done, severe damage to the tissues and ultimate loss of the limb may result. Once a tourniquet is applied it SHOULD NOT be loosened or removed until surgical control of the vessel is possible.

Some general rules to follow for the arrest of external bleeding are:

3. Shock Treatment during the triage stage

In traige, the third priority of stabilization is to identify and treat the condition commonly known as shock. Primarily, shock involves a decrease of circulating blood volume caused by blood loss, dehydration, fright, pain, poisons and writers infections.

Many times it is a combination of these conditions that causes severe shock to develop (blood loss and severe pain for example).

The following signs and symptoms are usually found:

Prompt first aid must be given to a per son exhibiting the above signs and symptoms.

The above measures can be applied by anyone without the necessity of a medical background. These measures are the very first that should be applied for anyone that is injured and showing signs of shock. Severe shock requires definitive treatment with intravenous replacement of lost blood volume.

The last priority of stabilization before casualty transport is to completely immobilize all fractures and to ensure adequate freedom from pain. Pain relief has already been covered in the first part of this article.

Splinting of fractures must be done before moving a casualty from the position he is found in. Before splints are applied it is necessary to assess the existence and location of any broken bones, sevre sprains, dislocationi and areas of severe swelling and discoloration.

If the casualty is conscious it is an easy matter to inquire into any complaints of pain, loss of motion, sensation, etc. Investigation of the area complained of will often reveal the cardinal signs of injury to the skeletal and muscular systents.

2. Loss of motion. This sign is not always present in a fracture until swelling causes immobility. Initially, pain is what generally prevents motion.

3. Bruising over the site of injury. Deep swelling of the tissues may also be present.

4. Distortion of the affected part. This sign may be present in long bone fractures but may not be noticeable in fractures of the ribs, skull, etc.

5. Crepitation. A grating sound can be elicited by manipulation of the fracture site. This signis not used at present because x-rays have made it unnecessary. Under survival conditions the elicitation of crepilation may be the only way to confirm the presence of a fracture.

Splints are applied to prevent movement of the injured part. They can be applied for sprain and dislocations as well as for actual breaks. The best spline available for extremity fractures are the air splints. These are heavy gauge vinyl tubes designed to completely envelop an injured extremity. Once in place, they are inflated and they provide a rigid, padded encasement for the limb.

Expedient splints may be constructed from rifles, boards, branches. etc. They must he adequately padded and be carried far above and below the fracture to provide complete in imobilization.

Because treatment is intentionally delayed or withheld from patients, triage has ethical implications that complicates the decision-making process.

Since ethical implications vary between different settings and the type of triage system employed, there is often no single gold-standard approach to triage. Once triage decisions have been made, it may be difficult to evaluate afterwards whether the decisions were ethically justified and the appropriate course of action. This can be especially stressful for triage responders who lack experience or support from peers.

Knowledge to survive any medical crisis situation before triage