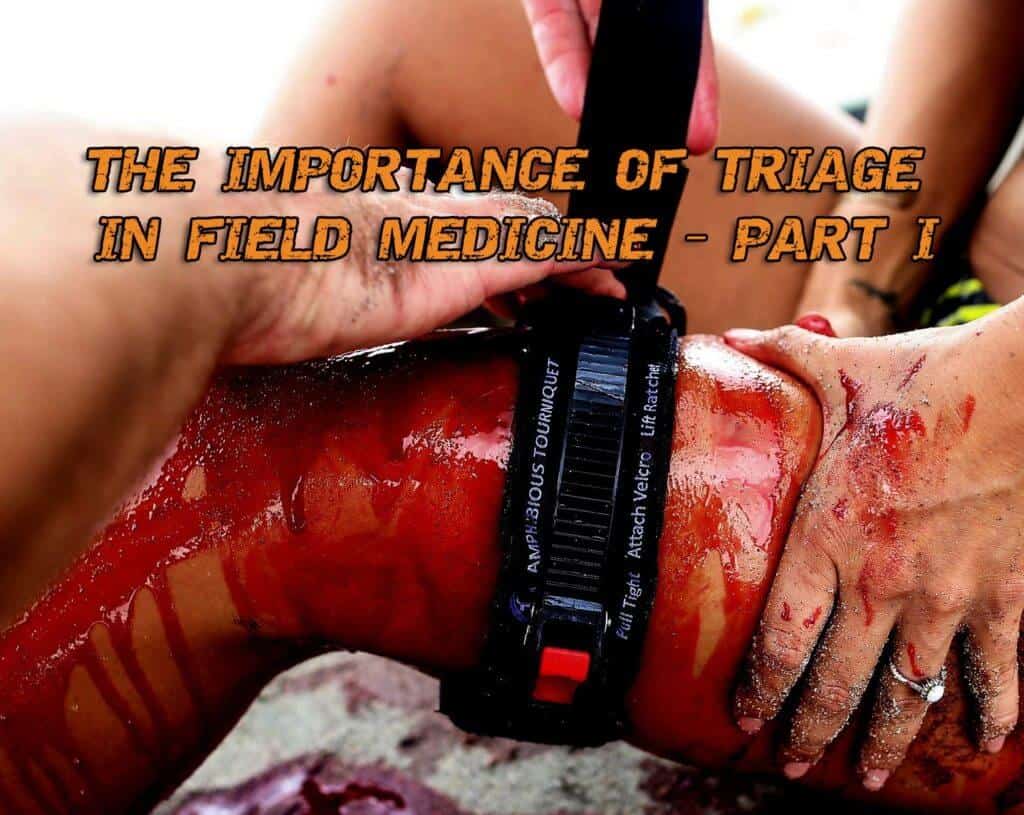 The most important aspect of Disaster Emergency Medicine (DEM) is the quality of the first care rendered to a casualty in the field. The importance of triage becomes obvious in field medicine as the fate of a victim suffering a severe illness or injury is directly related to the amount of time it takes to obtain medical care and the thoroughness of the care that is given.

The lime-lag factor between injury/illness and the acquisition of medical care will make the difference between disability and full recovery or between life and death in some situations. DEM preparedness is being able to provide rapid emergency medical care where it is most needed at the time.

Time is of the essence in field medicine

Disaster of any kind can lead to mass casualties. As it is certain that many wounded and ill will have to wait for very long periods of time before organized medical care becomes available, the quality of emergency field medicine must be adequate to the task.

To be effective, emergency field medicine must include definitive medical capability to stabilize the condition of the casualty so that organized medical cam may be reached at a delayed point. As the capability to render, definitive medical intervention is dependent on trained medical personnel and comprehensive equipment and supplies. Such resources must be distributed as sensibly as possible in order that the greatest good may be done for the greatest number. This is accomplished by utilizing a system known as triage.

Triage or urgency evaluation is designed to sort mass casualties so that expenditure of effort and supplies conforms to the prime rule of saving as many casualties as possible. Triage properly can be said to refer to the actual sorting of casualties into a classification based on immediate needs while urgency evaluation refers to the individual assessment of each casualty’s medical problem.

In field medicine, when a casualty is first encountered, it is a procedure to quickly check the extent of the situation as regards the threat to life.

Conditions which immediately threaten life are treated first, with those less urgent waiting until the time is available to correct the problem. Thy priority of initial treatment is outlined below. It should be remembered that many procedures may be performed simultaneously if the situation permits.

Realted reading:  Coping With Mass Casualties After A SHTF Event

Once the individual casualty bus been properly assessed, immediate care may or may not be required. A minor cut finger can wait for a considerable time with a first aid dressing applied without particular danger, while someone bleeding from a major blood vessel has only minutes to live if Intervention is not applied.

In some situations, the injury may be so severe as to prevent the expenditure of any effort other than those directed at comfort. Difficult choices often have to be made under such conditions with only “the greatest good for the greatest number” to set the guidelines. Unfortunately, sentimentality has no place in the medical care of mass casualties.

The first task of the paramedic in the field is to stabilize the condition of the casualty so that definitive care mny be reached later. If for example, someone sustained an artery wound, the shock resulting form the loss of blood and the wound itself must be adequately treated before transport can take place to another location. Rough handling. often unavoidable during the transport of a casualty, is poorly tolerated by those in shock.

It is important that the cardiovascular and respiratory systems be as stable as possible before a casualty is moved. Blood pressure should be as near normal as possible and holding steady. All bleeding points must be controlled prior to transport. This is not possible in the case of internal hemorrhage. However, in this case, ongoing intravenous replacement of lost blood volume will be necessary during transport.

Pain must be effectively controlled. Pain will cause shock to deepen and must he avoided. Unfortunately, transport often results in pain due to jarring, bumps and sometime falls. Very important to pain control during transport is the proper splinting of fractures, as any movement of broken bone fragments or failure to provide space for tissue swelling can cause severe agony.

The use of powerful analgesic drugs to relieve pain in the field is subject to considerable degree of controversy among medical professionals. Part of the argumeats against pain medication administration is the fact that the most effective drugs are addicting and are strictly controlled by law. Many “pain addicts” have been created by the injudicious use of narcotic analgesic drugs.

In addition, narcotics generally have the ability to depress the respiratory centers of the brain, thereby making the use of these drugs fraught with danger even in experienced hands. Clearly, no lay person should administer any narcotic analgesic to a casualty with pain.

Paramedics and other trained medical professionals must exercise extreme caution in the use of narcotic analgesics. First, it must be understood that even though a severe wound looks like It should be very painful this is not always the case. It has been learned that many severe wounds are not immediately painful after infliction. The mechanism of this phenomena is not completely understood, but it may be related to the release of natural opiate-like substances found in the body known as endorphins.

Certain types of wounds, however, were observed to be painful immediately after infliction, primarily wounds of the abdomen and long bones.

In addition to giving analgesics, the casualty must have emotional support from those rendering care. Fear and agitation are not treatable with narcotics. Verbal reassurance that everything possible is being done is useful. If medication is required, the best agent to use is amytal in doses up to 60 mg intravenously (IV). A small dose of both a narcotic and barbiturate will often be sucesful in calming a casualty who seems “transfigurated by pain.”

After the casualty has been stabilized in the field, the next problem Is to transport the casualty back to camp so that definitive treatment may be given. A Stokes wire basket stretcher is the hest means of moving a casualty over rough terrain. With this type of stretcher a casualty can be secured for extrication from rock faces. gullies. etc. The wire basket construction allows for excellent support against jarring during travel. Berme a casualty is placed into a Stokes, it should be thoroughly padded with blankets. If a casualty has a jaw or face wound. he should be transported lying on his stomach to allow for drainage of blood and mucus.

If a spinal injury exists, it will be necessary to completely immobilize the entire spine before transport taken place. It is desirable to transport a spinal casualty on a rigid stretcher that does not have any give at all when traveling over rough ground. If available, an immobilization stretcher which can be applied in sections under the casualty to avoid lifting should be used.

Once the casualty is in place on the stretcher, straps are placed to hold the head, neck and spinal column in alignment. Casualties suffering from neck fractures (confirmed or suspected) must have a foam cervical collar placed before application of the immobilisation stretcher.

Before transporting the victim

Before the actual transport of the casualty takes place, it is wise to check the vital signs (pulse, blood pressure. respiratory rate, and temperature) once more. Inspection should be made of IV sites to ensure the flow of the solution is correct. The circulation to extremities in splints should be checked by assessing the rapidity of the return of circulation to the nailbeds after compression. If the casualty is conscious, a final inquiry as to pain. etc., should be made.

Any complaints of tight dressings, splints, etc. must be investigated. During transport frequent slaps should be made to determine how well the casualty is tolerating travel. Particular attention should be paid to blond pressure, re-bleeding wounds, as well as any changes in sensation, level of consciousness and so forth.

Every effort should be made to avoid rough handling and jarring of the casualty during travel, although this will not always be possible. Those suffering from shock prior to transport should be frequently checked after a rough haul over difficult terrain. The procedure for stabilization of a trauma casualty in the field is outlined below.

These are field medicine procedures and do not include any definitive treatments other than the placement of an intravenous needle for shock treatment. IV treatment should only be applied by a paramedic with proper training in the procedure.

This may be the result of an actual blockage of the air passages or maybe the result of smoke inhalation, drowning, etc. The complete arrest of respiration is immediately followed by cardiac instability that leads to total arrest of heart action.

Respiratory depressant drugs such as morphine, barbituatet, etc., can completely arrest respiration by influence on the breathing centers of the central nervous system. Nerve gas, botulinus toxin and other agents are also capable of causing respiratory arrest followed by cardiac arrest.

A low flow state of the circulatory system can result in what is known as hypovolemic arrest. This is caused by an oxygen deficit to the heart muscle.

This is the most common cause of complete respiratory and cardiac failure. Known in lay terms as a “heart attack.” myocardial infarction (Ml) is a blockage of circulation to the heart muscle. Resuscitation efforts for this condition have a success rate of about 28 percent. For those who survive the initial shock, intensive definitive care is required.

Resuscitation efforts to be effective must be initiated immediately upon discovering cardio-pulmonary failure. However, not every person with presumptive evidence of death should be gisen CPR.

CPR procedures should be instituted only if:

This last requirement of when to institute CPR is appreciably modified under survival conditions. Definitive intensive cardiac care is not likely to be available to those who suffer from cardiac disease during a disaster. Resuscitation procedures use valuable time and supplies and take considerable effort on the part of the paramedic who may have to treat multiple casualties. Some judgment must be made as to who will benefit most from CPR.

In field medicine, effective CPR consists of artificial breathing and closed-chest cardiac compression. The correct method for applying these techniques may be learned at CPR courses which are taught in every large hospital throughout the country. Every member of survival group should take this training. The paramedic should always be ready to administer CPR when treating casualties in the field.

In the second part of this article regarding field medicine, we will look into hemostatic procedures, shock treatment and fracture stabilization.

How to organize your resources using Microsoft dispatch software