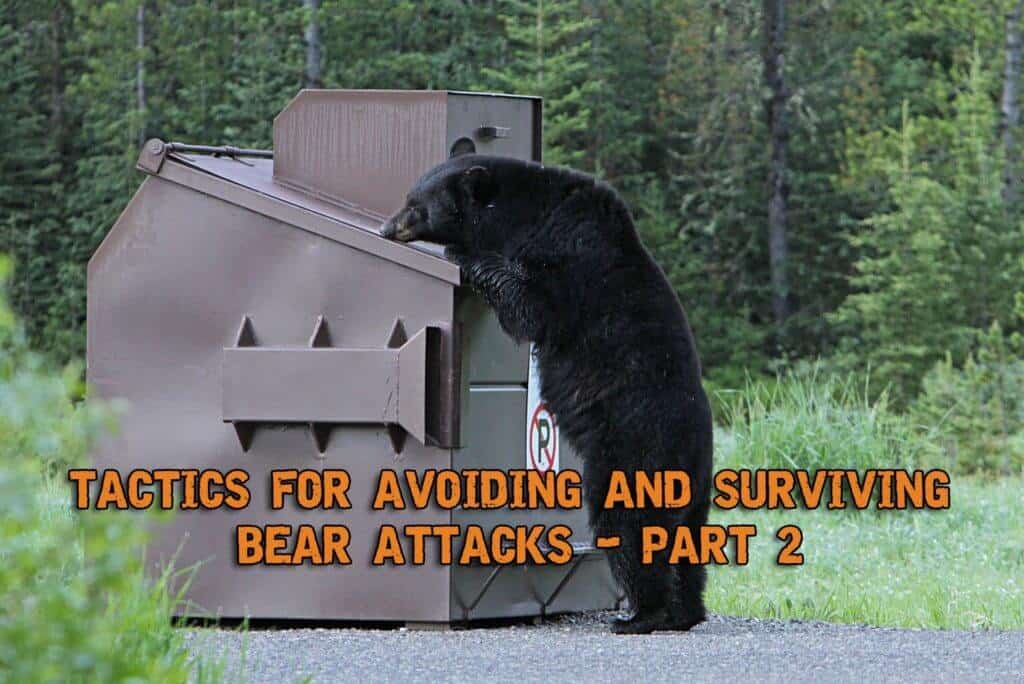 If you love the great outdoors and enjoy spending time in nature, chances are that sooner or later, you will encounter a bear. It happens all the time and even tough not all encounters have a tragic ending, is better to learn some tactics for avoiding and surviving bear attacks.

In the first part of this article we looked at bear behavior, we established how to properly identify bears and how to prevent bear attacks. It’s time to move further and see how one can stay safe and what tactics to be employed for surviving bear attacks.

It is impossible to avoid all bear encounters, and obviously, everyone should have some plan of action in the event of a chance encounter. It is important to remember that not all encounters result in an attack.

There are four main situations in which a bear might attack a human being:

Animal behavior is complex and unpredictable, depending on a great number of variables. The response to an attack will depend, to some extent, on the specific circumstances and the immediate environment, as well as the size and condition of the party and the hearing. What works in one situation may well not work in another, and the following are suggested guidelines.

Action to take when you encounter a bear:

1. Congregate in a group and stay calm.

3.  Climb a tree. You must allow yourself adequate time to climb at least 30 feet (10 m) up a tree. Remember, bears can move very quickly, and you need adequate time to climb high enough to be safe. Many people have been dragged down out of trees before they have gained a safe height. Black Bears can climb trees and may climb up after you.

5.  Fight back only when the bear is acting like a predator. Use any/every possible weapon. Put an object between you and the bear. Use noisemakers, shout, clap your hands, bang pots and pans, flares, bird scarers, fire, flashlight, and any repellent sprays/devices. It is especially important to resist night attacks as both species may be regarding you as prey and if you play dead too soon, you may be eaten.

In a daytime encounter with a Grizzly Bear, the bear may stand up and make a series of head movements in order to get a better sense of what you are. This activity may be accompanied by huffing and gurgling, snorts and woofing noises, and the clacking of teeth. False charges may follow when the bear comes closer but pulls up short of actual contact.

The bear may also run circles downwind to aid their sensing of what you are. An attack may be signaled by the bear dropping on all fours, raising the hackles around the neck, flattening the ears and growling. In this situation, “play dead” as the bear actually attacks you. Playing dead has saved many people surviving bear attacks.

Black Bear behavior is slightly different. Charges may be preceded by ground swatting, paw motions, and loud blowing noises. In these situations, “play dead” as the bear actually attacks you.

If you are attacked, bitten, mauled, or cuffed to the ground, play dead and passively resist by assuming one of the following positions:

2. Leave your pack on, assume a fetal position by curling up on one side, head buried in your knees and arms locked around your legs.

Remain in your chosen position and keep all sounds and movements to an absolute minimum. Try to “freeze” and maintain silence until the bear leaves. Your life may depend on it. After a bear leaves the scene, which is usually after 2 to 10 minutes, you might consider checking to see if the bear has really moved away before making any sudden movement to escape. An active person in a group can often draw the attack away after a sudden encounter. If one of the party is being severely mauled, other members may be able to draw the bear away by moving and making noise.

Precautions to take when traveling in bear country

There are a number of simple precautions to take when you are hiking in bear country. These are important for surviving bear attacks.

Always check in with the park authorities or land managers to obtain the most recent information regarding bear activity in the area you intend to visit. Also, report any sign of bear activity to the appropriate authorities on your return: When you are in the field, obey all official posted signs closing or restricting areas due to a problem or nuisance bear activity.

Stay alert for signs of recent bear activity and in particular, stay away from bears’ food sources in season. Travel in groups of six or more since bears are reluctant to attack large groups. Always make some noise as you travel, especially in dense bush and when the wind is against you. The direction of the wind will determine noise and scent travel.

The sound of running water may also obscure the sounds of your approach to a browsing bear. On the other hand, perfumes or personal body odors present during menstrual periods may attract bears. Dogs should never approach bears at close range. Better yet, leave dogs at home.

Surviving bear attacks requires for you to take all the necessary precautions. Pay attention to your camp selection and management to avoid luring the bear to your campsite.

1. When planning a camping trip, always check with park wardens or forest rangers on recent bear activity in the area you intend to visit. Take heed of all warning notices posted regarding bear danger.

2. Remember the following points when selecting a campsite:

3. Select a tent site near a climbable tree. You should be able to climb 30 feet up the tree to be safe from a Grizzly. Remember, Black Bears can climb trees.

1. Ensure you position your food cache 100 meters from your cooking site and 100 meters downwind of your tent site.

2. Use a tent. It is safer than sleeping out in the open. Keep a flashlight handy.

4. Cook only sufficient food for your requirement to avoid waste. Pack out all uneaten food or burn it completely. Burn and beat down any cans and remove plastic and aluminum foil. If you pack it in, pack it out. Do not bury garbage.

5. To reduce odor travel, all food, cooking utensils, garbage, toothpaste and other smelly items (and perhaps the clothes you cooked in) should be sealed in a plastic bag inside your pack and placed high above the ground on a rope.

It is very important to store food out of the reach of bears and rodents by using a bear rope to construct a safe food cache.

2. Take one end of the 30-meter rope and a carabiner and climb one tree to a height of seven meters. Tie off this end of the rope using a round turn and two half hitches. The rope should be tied off above a stout branch so that it does not slip down the trunk.

3. Measure off five meters of rope from the knot around the trunk and tie an overhand knot on the bight and clip the carabiner into the knot.

4. A second person can climb the other tree carrying the 1- meter length of rope, a carabiner, and a pulley, plus the other end of the rope. The short rope is tied around the trunk above a stout branch seven meters above the ground using a reef knot. The carabiner holding the pulley is clipped into the loop of rope around the trunk.

5. The bear rope is threaded through the pulley and brought down to the bottom of the tree ready for hoisting.

6. The food bag is attached by a carabiner to the overhand knot on the bight and hoisted as high as possible (minimum 5 meters). The end of the hoisting rope is tied off with a round turn and two half hitches.

Related reading: Planning A Shelter In The Wild

When you are using a backpack, it is advisable to clip the waist belt around the bear rope, so the sack does not hang too low. It is possible to construct simpler food caches. However, this system allows for substantial weight to be stored.

A more simple method is by tossing a weighted rope over an isolated branch on a tree. The branch should be approximately seven meters above the ground, and the rope should be at least three or four meters out from the trunk. Do not pick a branch that is too sturdy or else wildlife may reach your food.

Simply clip your food bag onto one end of the rope and haul it up. In some designated campsites, there are specially constructed food cache poles over which you can throw the bear rope and hoist your food pack.

If only a small food bag is required, it is possible to throw the weighted rope ends over two trees forming an “M.” Attach the food bag to the center of the rope and hoist it up by pulling on the ends of the rope.

There is no formula or rules which can be offered to completely remove the danger of encounters with bears. However, there are things you can do for surviving bear attacks. Wilderness users have to remember that they are the intruders into the bear’s natural habitat and must accept the level of risk which is always present in the untamed wilderness environment. The Cree word for the Grizzly Bear is Mustahyah meaning “spirit.” Truly the Grizzly does indeed represent the spirit of the wilderness, and it would be a sad day to see him disappear forever because of competition with man.