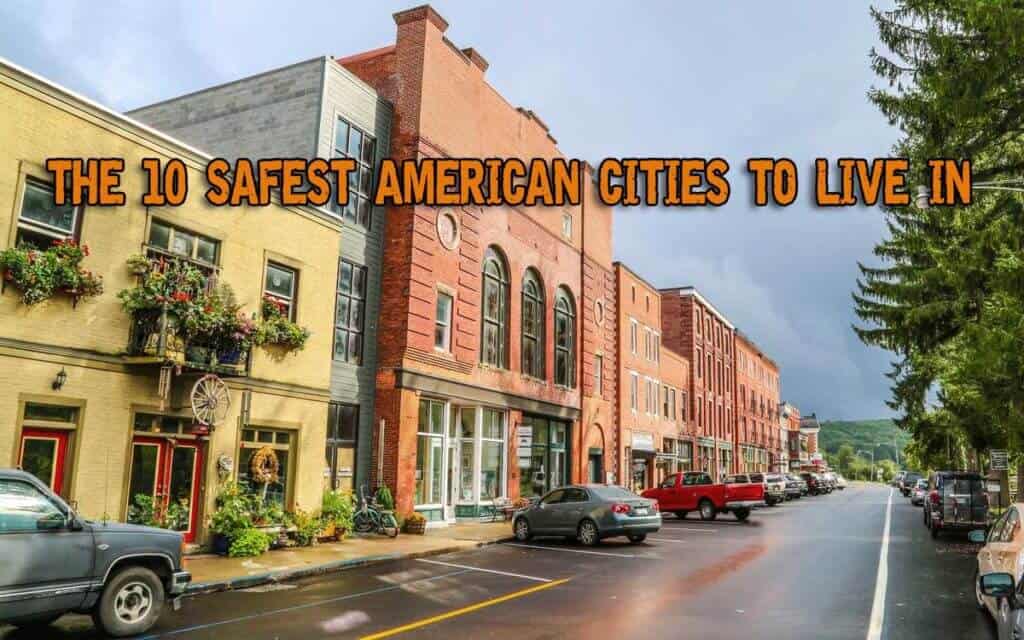 A good neighbor is a fellow who smiles at you over the back fence, but doesn’t climb over it. That might be true, but what stops your neighbors from coming over when it hits the fan? While you may live in a good neighborhood, can you say the same about the whole city? Here is a list of the safest American cities to live in right now. If yours made the list, you might have a head start when things go south.

No matter how harsh the wake-up call is, some people still have a hard time accepting the immediate reality. They fail to realize that their surroundings, although they were once familiar and peaceful can suddenly turn on them. When a natural disaster hits or a social crisis arises, having a head start can get you to safety faster than the rest of the “poor bastards” living outside your neighborhood.

There’s no point in sugarcoating this, after all, each and every one of us knows if we stay in a bad part of the town or the privileged part. The human factor becomes the number one threat for you and your family when society collapses. It is the unknown constant we have to live with and constantly “fear” it.

However, there are certain communities, neighborhoods and entire cities where life seems to be going much better. Where people like to help each other and they don’t look the other way when bad things happen. If you live in one of the Safest American cities listed in this article, then you are the lucky one. You may make it out when things go down and you may live to tell the story.

The statistics of the Safest American Cities

You may say you live in a good area, I may say the same, but people shouldn’t take our words for it. In fact, it’s better to let the numbers do the talking since you can’t go wrong with the science of numbers.

Although the media may seem to have a different opinion, crime levels have actually declined in the US over the past two decades. FBI states that the rate of violent crime fell almost 50% between 1993 and 2015. This is all information you can find in the most recent full year report available.

However, most Americans still say there is still more crime compared to the years before. The public perception about crime hasn’t changed much despite the downward trend in both violent and property crime rates. This may also be caused by the fact the media keeps pushing the news to the extreme. They make ever home invasion event look like it’s a national epidemic that grows with every passing hour.

A company that collects reviews of the Safest American Cities and does local researches recently made a report pointing out where people feel safe and happy. They made a list with the top Safest American cities to live in by providing a public crime data analysis. With the help of the FBI and the US census, they put together all the info on larceny, vehicular theft and homicides rates.

Following this data and the reviews of more than 10 million reviews from US citizens, telling them how safe they feel in their cities, they manage to make a rank of the Safest American cities.

One thing to mention is that California seems to be the safest state in the nation, having the most Safest American cities on the list. Also, most of the cities have a relatively low population and it makes sense for them to make the list. If you think about it the higher the density, the more the crime rate increases.

Within a city, high traffic areas are generally safer than low-traffic areas. The more foot traffic, the riskier an assault becomes for the assaulter.

This is a vibrant waterfront community that is the center of opportunity in Southwest Florida where families and businesses thrive. The City of Cape Coral will provide its citizens with services most efficiently and effectively possible while maintaining a positive safe and caring community with a united spirit.

As part of California’s high-tech area known as Silicon Valley, Sunnyvale is the headquarters location of many technology companies and is a major operating center for many more. It is also home to several aerospace/defense companies. Sunnyvale is the seventh most populous city in the San Francisco Bay Area and one of the major cities comprising Silicon Valley. Sunnyvale is one of the few U.S. cities to have a single unified Department of Public Safety, where all personnel are trained as firefighters, police officers, and EMTs, so they can respond to an emergency in any of the three roles.

Port St. Lucie also attracts a vibrant mix of people because of its low crime rate, diverse housing stock, abundant open space and because of the optimistic vision of the people who live here. According to BizJournals.com, the city has the highest home ownership rate in the nation in 2012 and is the only major market with a homeownership rate above 75 percent. There is plenty of room to grow for businesses, for families, and for people seeking the amenities of a big city while enjoying the comforts of a familiar hometown.

Known as “The Village by the Sea,” the city of Carlsbad offers the charm of a European town with the conveniences of a large city. With a perfectly mild climate, each season offers a variety of unique events and activities, from street fairs to art walks. Steps away sit clean, un-crowded beaches for swimming, sunbathing and surfing as well as beautiful lagoons for fishing, bird-watching and nature trail hikes. My brother lives in Carlsbad and I can tell you it’s a real pleasure visiting him. I can never go tired of the friendly small-town atmosphere I find in Carlsbad.

Suggested reading: Places to Avoid at all Costs When SHTF

Ann Arbor is many things, including a bustling university town, culinary hotspot, and a tech hub with a walkable downtown that includes world-class arts and culture. Ann Arbor area is most well-known for its globally-inspired cultural offerings. A long-time artists community, Ann Arbor, is home to renowned galleries, museums and arts non-profits, as well as theatrical and musical organizations that offer performances from local, regional, and international artists. Ann Arbor’s crime rate was below the national average in 2000

Round Rock promotes itself as the Sports Capital of Texas, the premier destination for youth and recreational sports. Located 15 minutes north of Austin, Round Rock is pro-business climate, educated workforce, and good schools make the city a great place to live in and it is one of the fastest growing communities in the nation.

Provo is the third-largest city in Utah. The metro area often ranks near the top of national polls regarding desirable places to live, work and play. One key reason is the accessibility to recreational areas. The Provo/Orem area provides easy access to the national parks and canyon country of southern Utah and also the mountains. Provo is located about 45 miles south of Salt Lake City, within easy driving distance of Salt Lake’s downtown governmental and business district and the Salt Lake International Airport. Provo is bounded on the east by towering mountain peaks and on the west by Utah Lake.

The City of Thousand Oaks is a proper community recognized for being one of the most desirable places in all of California to live, work, recreate, and raise a family. The City prides itself on its designated open space with 150 miles of trails for hiking, biking, or just leisurely walking. It is one of the Safest American Cities to raise your kids one of the country’s greenest cities.

Irvine was chosen in 2008 by CNNMoney.com as the fourth-best place to live in the United States. Since then, things have only gone better for the residents and it now takes the second place on the safest American cities to live in. Irvine has been rated one of the top cities for start-up businesses and its strong, fast-growing economy helped place Orange County as one of the top ten fastest growing job markets. Because Irvine is close to the coast, different parts of Irvine have different microclimates so everyone will enjoy their stay, no matter their background.

This vibrant, thriving city is home to acclaimed public and parochial schools, the best public library system in the country, world-class parks, diverse worship options, an array of healthcare options and an exceptionally low crime rate. With all the amenities of a modern city and all the charm of a small town, Naperville truly is the premiere community that has it all.

While the Safest American cities listed here may seem like a dream come true for their residents, we can’t all have the same amenities. What about your city? Do you know everything there is to know about it?

I’m asking this because there’s a big chance your home region and eventually your family, will be challenged during an emergency situation. Knowing how you stay, how your neighbors really are and how united or divide your community is will help you discover if you have a fighting chance when it hits the fan.

Things such as your location, environment, population density and social climate can influence the outcome of a disaster event. Studying the details of your home region will give you a better chance of surviving a crisis event. It will keep your loved ones safe during an emergency situation.