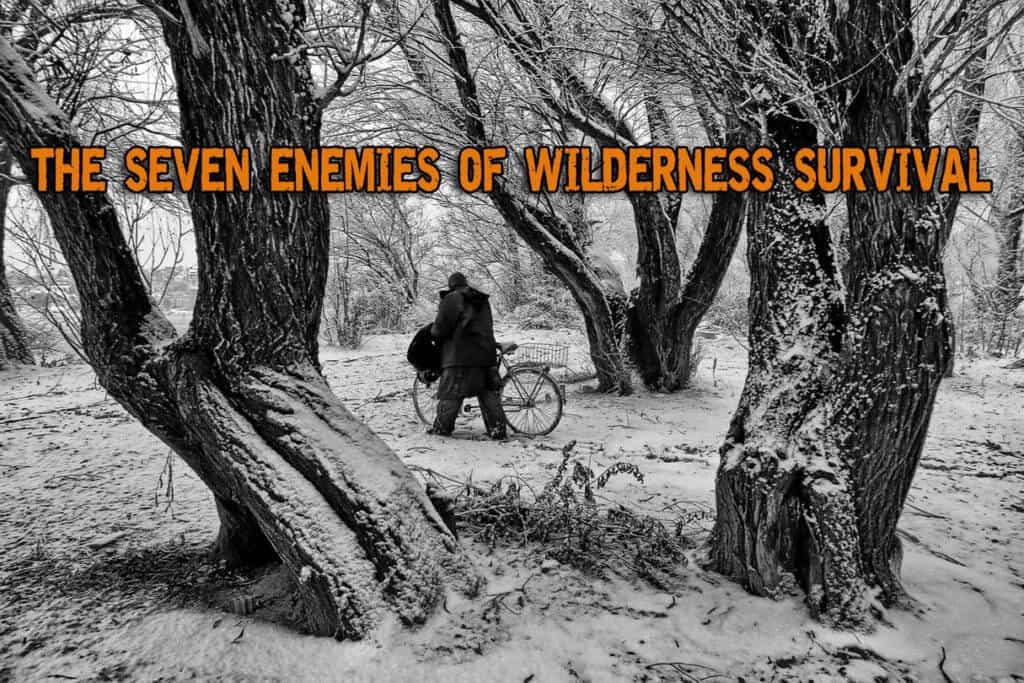 Every survivor, regardless of his or her situation, be it a result of natural disaster, getting lost in the woods or what have you, will be faced with a variety of threats. If you are forced to go to the hills and live in nature, there are a few enemies that can influence your continued existence. The following are the most common enemies of wilderness survival.

Various studies have demonstrated that the survivor, in order to survive, must have certain abilities. Wilderness survival requires for you to learn how to cope with seven factors that will affect your well being. These seven enemies are pain, thirst, hunger, fear, fatigue, temperature, and boredom & loneliness.

Not every survivor will be faced with all these enemies, but at least one will present itself during the survival debacle. The survivor’s skills and knowledge in dealing with each and every threat will determine the outcome of his or her predicament. Let’s look at the enemies one by one.

Generally speaking, pain does more good in many instances than harm. Pain is the mind’s only means of informing you that some sort of damage has been sustained by the body, and that you had better tend to that damage immediately if you wish to go on living. On the other hand, traumatic injuries such as sudden dismemberment or extensive third degree burns may cause shock — the mind’s refusal to accept what has happened to the body — to set in.

Pain ranges from minor, annoying pain, say that caused by a blister on your heel, to major, insupportable pain, such as that caused by a compound fracture of a manor bone with accompanying arterial bleeding. Regardless of the level of pain, the determined survivor must deal with it quickly and efficiently.

In survival situation a seemingly innocuous wound can become life threatening in a very short period of time. That scratch you received, should you allow it to become infected. may manifest itself into a dire emergency.

Tend to all wounds and other ailments at your first opportunity. Failure to do so may cost you more than you can afford. The survivor who lacks extensive emergency first aid skills is a threat to his own existence.

The human body requires several quarts of water each day to miry out its basic metabolic functions. Exactly how much water your body will need in a survival situation will depend on a number of factors: ambient temperature, level of physical exertion, humidity, physical condition and so on.

Without that all-important water, your body will cease to function. You must have water to survive and it will become one of your major priorities. We lose water through a variety of means such as perspiration, exhalation, urination and defecation. If you fail to replace the water you use, the killer known as dehydration will set in.

Dehydration is one of the most serious physical ailments a survivor can he faced with. During a scenario where you have to face the enemies of wilderness survival you will suffer from dehydration more than any other malady. Symptoms of dehydration include dark urine, headache, nausea and disorientation. Be alert of these early signs. Missing them could lead to your demise.

Found a dry river or stream bed? Dig down on the outside bends a couple of feet. Water may be just below the surface. Carry at lean a section of clear plastic with you and a length of surgical tubing. These will come in handy if you need to construct a solar still.

Those birds all heading in one direction at dawn and dusk are quite likely to be heading for a source of water. Check your map and look for water holes. Tiny streams or perhaps a spring can often be located in draws or at the base of cliffs. Regardless of where you find your water, purify it before drinking. Clarity is not a reliable indicator of  the water’s purity. Nasty bacteria such as Giardia can kill you rather quickly or make you wish you were dead.

When confronted with a long-term survival episode, food will become more than a nice thing to have. After a few days of going on an empty stomach, it will become a necessity. Hunting, trapping and gathering skills take time, patience and practice to master. If you intend to survive, a mediocre level of knowledge and ability in these fields won’t cut it.

You are going to have to become darn good at food acquisition. One of the most challenging and rewarding talents a survivor can develop is plant identification. A wise survivor will become adept at identifying the flora in his area of operations long before he is actually required to put those skills to the test, for real.

Twenty minutes after an 8.0 earthquake levels your city or hometown is not the time to start brushing up on what plants you can eat safely and which ones you can’t. Use the universal taste test for all flora that you can’t positively identify. Remember, you cannot consume any other plants during this 24-hour test.

Mushrooms are a debatable topic when it comes to wilderness survival. This is due to the fact that many of the more than 500 species of mushrooms growing in North America have toxic look-a-likes. Even more, most of the mushrooms you will find are mostly water with minimal nutritional value.

If you cannot absolutely positively identify the mushroom you are considering eating. DO NOT EAT IT!

Hunting for game can be very productive, though trapping is preferred. Why? Trapping allows the survivor to be tending to other tasks important to his or her survival while the traps and snares that were set earlier are out in the bush doing their job.

The crafty survivor who sets out 20 snares and then returns to camp to tighten up their shelter or tend to some other chore is wiser than the person who simply wanders off in search of a hare, hoping he gets a shot at one. When you set out 20 well-constructed traps or snares, you have 20 hunters hunting for you.

When setting a snare, remember two things: simplicity is almost always best, and set each snare for a specific types of game. General purpose snares are often much less effective than a specialized one.

Fear can be a great catalyst. It may force a victim of some disaster or accident into action, action that may save their life. However, that action will not be possible if the survivor lacks self-confidence.

One acquires this vital commodity by attaining two things — knowledge and experience. Once you have those items, self-confidence will begin to build within you. Fear has been known to give birth to a deadly offspring — panic, that sudden, unexpected and overwhelming terror that destroys a person’s capacity for self-help. Once panic sets in a survival situation, the could-have-been survivor is in mortal danger.

When you feel that hot, boiling sensation deep in the pit of your stomach and your mind begins to race, stop. Think. Make a decision. Trust your-self. Make that decision and stick by it. If it is the right decision, you will survive. If not, well, if not, then you will have no further worries.

Had you taken the time to get the aforementioned knowledge and experience, chances are you wouldn’t be facing this latest problem in the first place. Look at it this way. You have the rest of your life to get out of this situation. Go for it.

Fatigue is your body’s way of telling you it needs rest. If you feel yourself becoming fatigued, and if the situation permits, stop and rest. Failure to do so may lead to exhaustion. An exhausted survivor may be unable to recognize one or perhaps several of the Seven Enemies. If you are not in good physical condition, you are unprepared for survival. Partner, you may have to run in order to save your own life or the life of a friend or loved-one.

Picture it. While hiking the Appalachian Trail or “AT,” your buddy slips on a moss-covered rock and suffers a serious concussion. Cerebral-spinal fluid (CSF) is running out of his ears and nose. If you move him, you may inadvertently kill him. You stabilize and cover him to hope-fully delay the effects of shock. Route 4 is five miles distant. Get going. Your friend’s life now depends on your physical condition. Are you going to let him down?

We have all been cold and we have all been hot. Usually we have some means at our disposal to thwart the effects of the cold or heat. That means is normally very convenient in our day-to-day lives. In a wilderness survival situation, however, that means may be anything but convenient.

Extremes in temperature take the lives of could-have-been survivors every year because they lacked the skills needed to save their own lives. Don’t let this be you. When is the last time you tried building a wind and rain resistant primitive shelter out in the bush?

Attempted to get a usable fire going lately with only one match and some marginal tinder, kindling and fuel? Practice in these almost lost arts is essential if you are to survive when the going gets ugly. Brush up on them now. You may need them tomorrow.

Related article: How to start a fire against all odds

Strangely enough, boredom and loneliness are two of the most commonly experienced emotions in survival predicaments. Countless survivors have told their rescuers of profound feelings of intense boredom during their debacle. They said that there was simply nothing to do. But when their particular situation was examined in detail, it is often found that from a survival stand-point, there was much the survivor could have done to make his situation more comfortable and safe.

Once again, knowledge and experience are seen to play an important role here. The survivor must constantly be thinking about the means available to him or her to help insure their survival. If you are bored or feeling lonely, you are not engaging in productive thought.

Again we see that an enemy of survival can be used to our benefit. If you can recognize boredom and loneliness as they begin to set in, you can use that very recognition as a tool of sorts to force you into action. There is always something to be done in a wilderness survival situation. Always!

A last word on wilderness survival and its main enemies

To fight these seven enemies of wilderness survival one must prepare and learn long before disaster strikes. Apply a systematic approach to wilderness survival and consider what is most likely to happen in your area that may force you to go into the woods.

All seven enemies can be successfully fought if a person has skills in five areas — first aid, signal construction and use, fire building, food and water procurement, and shelter building. Become proficient at these five skills and the challenges of wilderness survival will affect only the unprepared, the weak. Be strong and survive!

1 thought on “The Seven Enemies of Wilderness Survival”