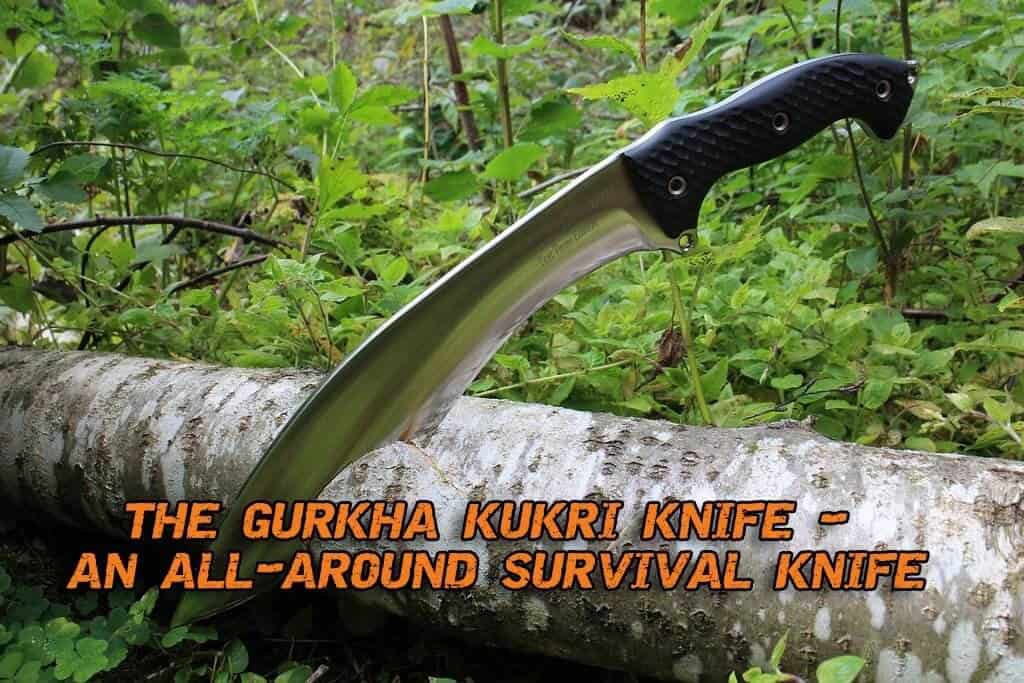 After buying my second Gurkha Kukri knife, my wife started saying that I have a knife obsession and I have too many of them. I tried to explain to her that finding a perfect survival knife is an ongoing search and it’s just like finding the perfect partner in life. She didn’s seem too much impressed by my explaining, and she still thinks I should stop buying knives. Well, what can you do…

Now, coming back to our search for a perfect survival knife, me, like many other outdoorsmen like to “be prepared” (like the Boy Scout motto says) for any trail-blazing emergency, including getting lost. But experience tells us that to tote knife, hatchet, saw, and machete into the wilderness is enough to give even Rambo a hernia.

Contents hide
1 A quick history lesson
1.1 Recommended article: The Blade Type Of A Perfect Survival Knife
2 It’s all about the money
3 Getting in love with the Gurkha Kukri knife
3.1 Recommended reading: Eight Tips To Consider When Buying A Knife
4 The chopping power of a Gurkha Kukri knife
5 An all-purpose knife
6 A quick note about sharpening
7 Concluding
8 Useful resources to check out: 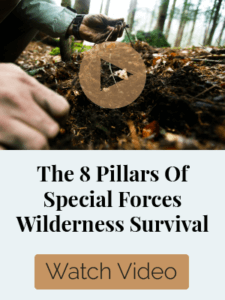 “The Kukri is the national as well as the religious weapon of the Gurkhas.  It is incumbent on a Gurkha to carry it while awake and to place it under the pillow when retiring.”  –  Maharaja Padma Shamser Jangbahadur Rana

With its origins going back to ancient times, the  Gurkha Kukri knife is not just the national knife of Nepal but is also symbolic of the Gurkha soldiers. It is a prized possession with which soldiers have indelibly carved an identity for themselves.

The overwhelming cutting edge of the Kukri was first experienced by the British soldiers in India who had to withstand it in the well-documented battles since 1814 while combating the Gorkha army in western Nepal.

It was then that the Legend and romance for this knife were born. In the Gurkha soldier’s grip, this curved steel becomes an incredibly threatening weapon with which soldiers have demonstrated rare feats of bravery while facing the enemy in every battlefield.

The precise origin of the Gurkha Kukri knife is not known, and it’s a mystery that waits to be unearthed. It seems that its origins have been lost in the mists of time.

Recommended article: The Blade Type Of A Perfect Survival Knife

However, many historians agree that is one of the oldest knives in the world. It seems that the particular blade shape might have descended from the classic Greek sword of Kopis, which was dated to 2500 years ago.

The Machira, the cavalry sword of the ancient Macedonians which was carried by the troops of Alexander the Great when invaded northwest India in the 4th Century BC and was copied by local blacksmiths or Kamis.

Even more, the construction of the Gurkha Kukri knife is similar to the crafting method of old Japanese swords. These finding and similarities with other blades make it the oldest knife in the history of the world.

It’s all about the money

So we seek the type of survival knife that would be perfect for all our needs. But most of us are too stingy to dish out $300 for a samurai-quality blade.

Having experimented over the years in the woods with a variety of knives, hatchets, machetes, and you-name-it, I have finally settled upon the Gurkha Kukri knife (also known as the Kukri knife) as his trusty personal survival knife for camping.

Three reasons prevail. It has a curved foot, long blade designed for hacking and chopping (versatile for many camp chores) .It’s no bulkier to carry than a hatchet. It sells for around $60, quite a bargain on today’s knife market. Higher quality, more expensive versions are available from many of today’s major knife makers.

Getting in love with the Gurkha Kukri knife

To hold the Gurkha Kukri knife in your hand gives you that feeling of confidence. No doubt, a knife with a foot-long blade is one you should expect to do more with than just clean fingernails. It has a simple riveted wooden handle and a dandy leather-coated woo-den sheath with a nice wide belt loop.

It tempts you to mount this unit on a den wall next to a bearskin, and some collectors do just that. But after you test one you realize it is a durable outdoor knife due to blade thickness (a full 1/5 inch on top). The carbon-steel blade is also much easier to sharpen than stainless steel. And knife experts will tell you that “sharper is better.’

It is NOT fancily crafted or elaborately honed like a samurai sword, but you don’t pay samurai prices for it either. It was designed as a practical tool like any hatchet or machete, so don’t be afraid to treat it in such a manner when in the great outdoors.

Since the Gurkha Kukri knife replaces “fancy-dancy” with durability, it would be easier to wreck a common hunting knife or surplus machete when hacking up the North Woods before you would call a tow-truck on the hefty Gurkha.

Recommended reading: Eight Tips To Consider When Buying A Knife

The Kukri knife also comes with a pair of tiny “ceremonial” daggers the Gurkha warriors supposedly used for striking flints and skinning game. But quality on these “toothpicks” is below par, and they require much sharpen-ing before proving practical. I gave up on them, and I would prefer a Boy Scout pocket knife in place of these “toys.”

The legendary Gurkha Kukri knife dates back to the 12th century. To this day, the Kukri is still the personal weapon of the Gurkhas of Nepal and Northern India. Kukri making is a craft handed down from father to son.

The Gurkha warriors were feared soldiers in hand-to-hand combat due to this lethal “coconut-buster” weapon. The Kukri knife also served as a religious symbol to the Gurkha and indicated by the two notches on the underside by the handle (“divinity”). Honest-to-gosh Gurkha knives will also have the word “India” engraved today on the side of the blade.

The chopping power of a Gurkha Kukri knife

The “secret” behind the Kukri knife’s amazing hacking and chopping power lies in its unique downward curved 12-inch blade that makes it slightly resemble a boomerang. This design improves or intensifies its striking capabilities.

The Gurkha warriors obviously had this concept in mind when designing it as a fighting knife. They knew it was capable of severing a man’s head at the neck in combat. A while back I conducted my own “chopping” experiment, and pitted the Kukri knife against a bowie knife, hatchet, folding pack saw, and a machete.

The test objects on trial were wooden dowels, tree branches, 1×2 boards, pine boards, 2×4 blocks, and even a wooden chair. The Kukri knife won the contest hands down. It took fewer whacks to smash cleanly through these objects than the other contenders, including to my surprise, the hatchet.

The Gurkha Kukri knife is no worse to tote around than a hatchet. When sharpened, it proved effective clearing brush, building a lean-to, cleaning fish, sharpening spears, and smashing coco-nuts. It’s good for self-defense (just ask any Gurkha warrior).

There are plenty of decent “hollow handle” survival knives on the market today filled with all kinds of “goodies” like matches, fish hooks, and odds-n-ends short of a rubber raft. These knives are certainly fine if you find yourself briefly lost in the woods for a weekend or so. But let’s imagine if you were lost in rugged terrain for a week or longer (cases on record by pilots, explorers, etc.). And, you had to build a sturdy lean-to to protect you from snow or had to hack your way through dense forest brush.

Are most of these “hollow handle” survival knife blades really designed for such elaborate outdoor challenges? A hacking and chopping tool like the Gurkha Kukri knife is really what you need. And, a “multi-purpose” tool (again like the Gurkha) that can make deadfall snares, build a crossbow, behead rattlers, and which can fit comfortably in your pack, would be worth its weight in gold.

A quick note about sharpening

Out-of-the-box, some Kukri knives could use some sharpening, and I recommend an ordinary hand metal file to “make ready” the carbon steel blade. Though a honing stone will also work, it is usually too slow when tackling such a big knife. If you have ever sharpened a hatchet or machete with a metal file you will find they can give you the edge you want.

Electric grinding wheels are not recommended, and I stay away from them when sharpening my knives. They are difficult to be accurate with and often end up grinding away too much of the knife blade unnecessarily. You might end up with a brittle edge this way. Stick to the hand metal file for the standard results. Plus, you can easily stuff one into your backpack to touch up your Kukri knife after working with It.

I’ve used my Gurkha Kukri knife in the Arizona desert to slice open barrel cactus for water, in mountain country to get icy snow off my truck’s windshield, and opened many food cans with it. So next time you need a hefty survival knife, consider the Gurkha Kukri knife. It’s a bargain “life-saver” that is hard to beat.