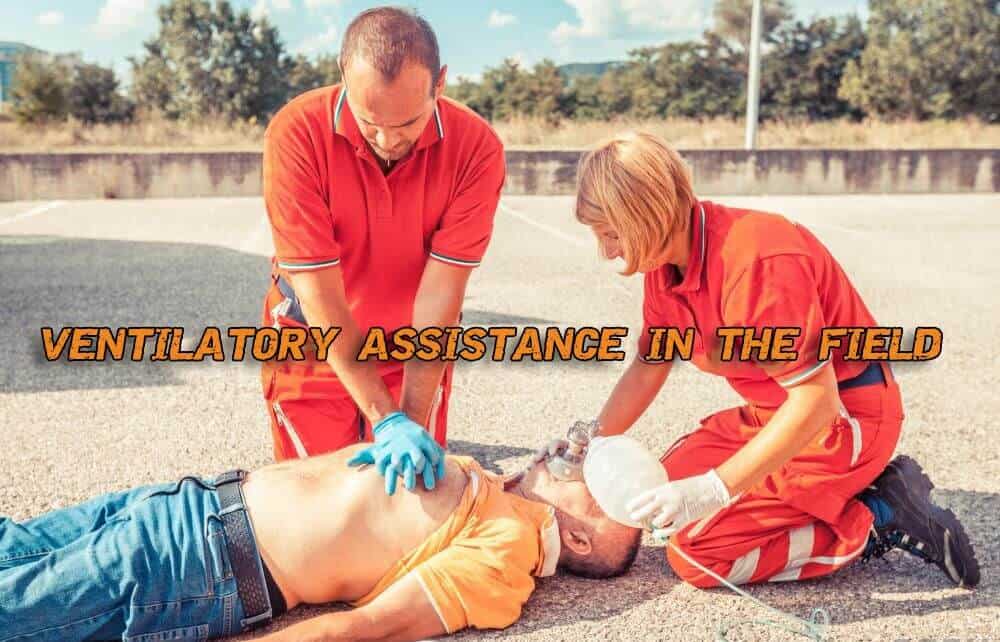 Anyone who has taken a course in Cardiopulmonary Resuscitation (CPR) knows the accepted method of ventilating a person who isn’t breathing spontaneously is to open the air-way and give mouth to mouth ventilations. Ventilatory assistance should be provided without causing further harm to the patient.

Anyone who has actually done CPR on a human knows mouth to mouth is not a pleasant experience for the rescuer. Very frequently, the person who has suffered a heart attack will vomit. This is why “finger sweeps” are taught as a method to clear the airway. If the person has not vomited, after you have done mouth to mouth for a couple of minutes, he probably will.

No matter how good an airway you have established using the chin lift or jaw thrust, each breath you put into that patient’s mouth will be divided between the lungs and the stomach. Eventually, the air that goes into the stomach will come back out, bringing with it some of the patient’s gastric contents. Even in an “uncomplicated” cardiac arrest, the chances of a rescuer getting a face full of vomit are extremely good.

If ventilatory assistance is required due to trauma, in addition to vomit, the rescuer may have to contend with blood and/or other secretions. So in addition to insulting the rescuer’s aesthetic sense, the potential for exposure to infectious disease is introduced by simply doing “good, acceptable” mouth to mouth.

The advantage of mouth to mouth is obvious in ventilatory assistance since special equipment is not required. If the patient’s airway is obstructed, it will be apparent with the first attempt to ventilate. Mouth to mouth, direct skin to skin contact, provides an excellent seal. Therefore the air goes into the patient’s upper airway, not past the nose or eyes or chin.

The obvious solution to the problems for a rescuer having to place his mouth on a patient’s face is to place a mask over the patient’s mouth and nose and have the rescuer breathe into the mask. This has the advantage of keeping the rescuer’s face off of the patient’s face while still noting the compliance (acceptance of air into the lungs) or resistance to the ventilation.

The problem of the patient vomiting is not solved with this device. As a result of the design, in fact, the vomit is funneled into the rescuer’s mouth.

Within the last decades, various companies have begun manufacturing marketing “one-way” valves that are inserted between the rescuer and the mask. Thus, anything coming out of the patient’s mouth is deflected back toward the patient’s face. This system stores easily in a pocket-sized plastic box and is referred to as a “pocket mask.” Under the right circumstances the pocket mask works quite well.

Difficulties arise when the pocket mask is used on a person whose face is other than average in shape or size. The pocket mask is not sufficiently flexible to seal on every patient’s face. Even when this device fits perfectly on a patient’s face, it requires two hands to seal and to properly maintain in position for proper ventilatory assistance.

When it comes to ventilatory assistanc, hospitals and ambulances use a device known as a bag valve mask assembly instead of a pocket mask or mouth to mouth. This device consists of a face mask, a one-way valve, and a resuscitator (squeeze) bag. Most also are equipped with an oxygen reservoir.

Related article: The Importance of Triage In Field Medicine – Part I

From the perspective of cleanliness and contact with the patient’s fluids, this device is the best yet when it comes to ventilatory assistance. The difficulty encountered in squeezing the bag is an indication of how patent the airway is. If the airway is obstructed and the mask is sealed properly on the patient’s face, it will be very difficult to squeeze the air out of the bag. In this case, the airway must either be cleared or an airway maneuver (such as the modified jaw thrust) performed.

There are a couple of disadvantages to this device. Like the pocket mask, the face mask of most bag valve mask assemblies requires two hands to properly maintain a seal on the patient’s face. Obviously, if a lone rescuer is attempting to ventilate a patient with this device, the rescuer is going to come up shorthanded, in a literal sense.

With two hands on the face mask it is extremely difficult. One hand on each, if the rescuer has large hands, will work, but still not as efficient as two hands on the mask and at least one on the bag would. Resuscitator bags (also commonly referred to as ambu bags) usually come in three sizes — adult, pediatric, and infant.

An experienced rescuer can limit the amount of force applied to an adult ambu bag when using it on a child. However, an adult face mask will usually be too large to acquire any kind of seal on the patient’s face. Unless equipped with a special pressure relief valve and appropriate size mask, a pediatric bag cannot be used on an infant. This is an important thing to remember when providing ventilatory assistance.

Ventilatory assistance in hospital and in the field

In the hospital setting, trained personnel have been endotracheally intubating (placing an ET tube into the trachea of) patients in order to provide definitive airway management. Prior to this time, endotracheal intubation was seldom seen outside the operating room or emergency room.

A step toward field use of this device occurred with the use of the Esophageal Obturator Airway and the Esophageal Gastric Tube Airway. These tubes were designed for paramedic personnel to place down a patient’s throat, into his esophagus. A thin rubber balloon (cuff) at the end of the tube was inflated in the esophagus thus occluding it and preventing aspiration. Hospital studies showed varying results, but most emergency medical personnel agreed that neither device was an adequate substitute for endotracheal intubation.

Endotracheal intubation is a skill which requires training and practice as well as special equipment. It involves using an instrument called a laryngoscope to hold the tongue out of the way and look down a patient’s throat. Once the vocal cords are visualized an endotracheal tube is inserted to a point just below the cords. A technique known as “digital” or “tactile” intubation is also practiced by some rescuers. This does not require a laryngoscope but takes a lot more practice and experience to be dependable when providing ventilatory assistance.

With this technique, landmarks within the throat (primarily the glottis) are felt with the fingers, and the fingers are used to guide the tube into the trachea, rather than to visualize the landmarks. At the end of the endotracheal tube is a cuff which is inflated via an attached airline, using a syringe. The inflated cuff helps to hold the tube in position. It also seals the trachea so that if the patient vomits, the material is not sucked into the lungs or airway (aspirated).

An ambu bag and one-way valve assembly is attached to the end of the tube, and the patient is ventilated very efficiently. For appropriately trained and equipped rescuers this is the ideal means to secure a patient’s airway. Even very experienced rescuers have difficulty intubating an occasional patient. However, the reasons are usually related to anatomical anomalies or an airway so obstructed with secretions that even with a suction machine the cords simply cannot be seen.

After considering these factors concerning airway management and vetilatory assistance, Respironics, Inc., of Monroeville, Pennsylvania, first came up with a new mask. Marketed as the “SealEasy” mask but known affectionately as “The Blob” and this mask is quite flexible. Actually, it resembles a large plastic sliced bagel more than an innovation in life support masks.

This mask can be held in place using one hand. It is sufficiently pliable to fit on virtually any size face and provide an excellent seal. It can be used as a pocket mask or can be attached to an ambu bag.

Ventilatory Assistance  and the PTL Airway

Back in ’89, Respironics completed testing and begun marketing a device they call the “Revive Easy Pharyngeotracheal Lumen (PTL for short) Airway” for use in ventilatory assistance.

This device incorporates the good points of endotracheal incubation while eliminating some of the risks. The most promising feature of the device is that it can be placed in the teen to adult-sized patients with a minimum of patient manipulation. Thus, the device is excellent for use in the trauma patient.

It is placed “blindly” and does not require a laryngoscope or other special instruments. Just as important, in clinical testing, there have been no appreciable differences in blood gasses of patients ventilated using the PTL than those ventilated through an ET tube.

At first glance, the PTL appears to be a tangle of tubes and balloons. Closer scrutiny reveals an ingenious device that allows placement into a patient’s throat and effective ventilation regardless of the tube’s position in either the trachea or esophagus.

This balloon eliminates the difficulty in attaining a good seal with a face mask. This is an important consideration in dealing with a patient who has sustained facial injuries. Equally important, this prevents blood or other secretions from traveling down the oropharynx and occluding the trachea, or down the esophagus to stimulate vomiting and adding to the problem.

Most of the airway management devices used for ventilatory assistance in the pre-hospital setting are designed for use on children and adults. This author has personally used bag valve mask assemblies in attempts at resuscitating infants. They do not work nearly as well on infants as for adults. With an infant, if he cannot be endotracheally intubated immediately, there is no substitute for good mouth to mouth ventilation.

Even after every aspect is considered, this author has never seen any rescuer, himself included, ever hesitate to perform mouth to mouth ventilation on a child or infant when such action was indicated.

This procedure will probably remain the only effective alternative to intubation in these tragically young patients.

Most people instinctively wish to help an injured person. Unfortunately, with the prevalence of debilitating and even fatal diseases in people who may not appear to be sick, most people now hesitate to perform mouth to mouth, if needed. The products described in this article can effectively, safely and inexpensively provide an alternative to performing mouth to mouth. They, or similar devices, are highly recommended for addition to any trauma bag, auto first aid box or medical cache.