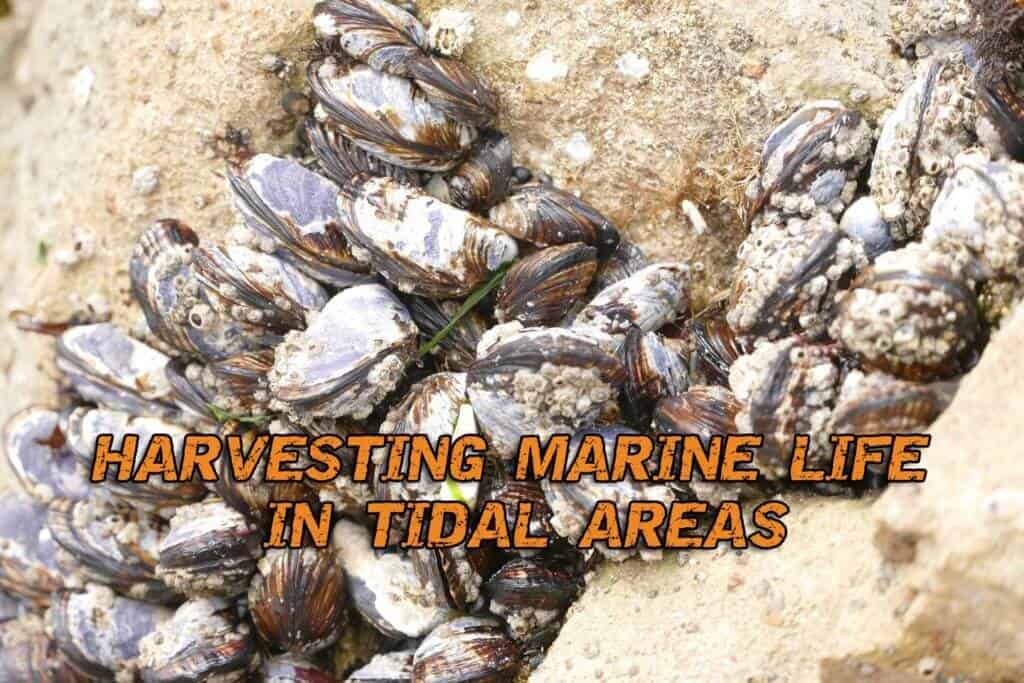 A person could survive, perhaps even thrive on seaweed, octopus, and sea urchins. But there are other creatures in the tidal pools, and just beyond: crabs, lobster, mussels, clams, oysters and more. Harvesting marine life will help you procure a meal if you find yourself in coastal areas.

Here are some tips for harvesting marine life.

Crabs may be caught in several ways:

1. With bait, like a piece of raw chicken on a string;

2. Sneak up and grab them with your hand;

3. Set wire traps and bait them with fish heads, octopus entrails or other organ meat. A chicken wing tied to a piece of string will catch crabs legally from May through September.

The crustaceans grab onto the meat with their pinchers and won’t let go. Pull in the string until they are close enough to grab, (or scoop them with a hand net) then stuff the animal into your collecting bag.

In bountiful areas, at slack tide, you can often swim up and grab the crab from behind (avoid a frontal approach into the animal’s claws). Tools needed are a thick pair of gloves, wet suit, weights, collecting bag, mask, fins, snorkel, and measuring tool (states have legal size limits).

Dungeness crab may be taken in California, Washington, and Oregon. They have protective coloration that blends in with the bottom structure, so you must look carefully. During the waxing and waning of the tide, these crabs burrow under sand, but at slack tide, they get up and start foraging. This is the best time to snorkel for them.

Simply, hover on the surface in clear water and wait for a crab to make its appearance. Then dive and grab.

The preferred method of hunting is to remain motionless about 8 or 10 feet above the bottom. Look for movement. Then take only males and leave females to breed — thereby securing your crab hunting future (fishing regulations illustrate sexual differences between crabs).

Related article: How To Catch Minnows as Bait for Survival Fishing

Another productive method for harvesting marine life is to trap crabs in wire cages. These “pots” have one or two funnel like entrances where the crabs crawl in, but can’t crawl out. As mentioned earlier, use some wire to attach a piece of raw, bloody bait inside the trap. This lures the voracious arthropods into the “pot.”

Set the traps on the bottom, along a stretch of protected beach that slopes gently toward the abyss.

In order to find your trap again, attach it to a float. Make certain the line has enough slack, so your float doesn’t disappear during high tide. Drop traps at varying depths — 20, 40 and 60 feet. Commercially available traps are weighted, so the tides, currents, and wave action don’t drag them away.

Stone crabs, blue crabs, king crab, and spider crabs may be taken as described above. Or you may simply fashion a nine-foot square net that is baited with leftover food (clip the food parts in the center of this open net). Then lower the net to the seafloor and allow it to rest for an hour. Soon crabs will be chomping on the leftovers. The voracious scavengers won’t scamper away or let go.

Sounds good to me. Here’s how you do it.

In October, the West Coast lobster diving season opens. For a few brief months, divers and snorkelers lift thousands of lobsters from the tidal zone’s deep fringe. A rare 20 pounder may be 70 years old. More commonly, two, three and four pounders are taken. It’s the best time of the year for harvesting marine life.

Like Dungeness crabs, there is a size limit on spiny lobsters (Panulirus interruptus), so you will need a measuring gauge. Also, have aboard a fishing license… and remember the catch limit in California is seven per day (check local laws as they may change).

A snorkeler or scuba diver must take lobsters with his hands only. You don’t have to dive for lobster, surface marked traps can be used too. More about that later. Anyway, if you try to catch lobster, with your hands, keep your “claws” covered: although spiny lobster doesn’t have pinchers, they are studded with sharp spines that will lacerate your hands.

An astute surface trapper or diver may stake out a secret lobster haunt months ahead of time. One sure way to beat the competition is to tow a diver behind a boat (motor very slowly). Behind a boat you cover a great deal of lobster habitat in a short time.

In California and Florida (especially off the coast of Ft. Lauderdale and Miami) there are coral reef fragments. In the early summer, these large flat “rocks” often have three or four lobsters under them. But the coral habitats are far, and few between, so the boat towed diver (snorkeler) can cover more ground, and find more lobster.

Rocky areas around Santa Barbara, Point Conception, the Anacapa Island and Flat Rock near Palos Verdes in California are also productive. Santa Catalina Island should not be overlooked as it is perfect for harvesting marine life. Also, there are productive areas south of the border in Baja, Mexico.

Anyway, lobsters prefer rocks and can cram their bulky body into the thinnest crevice. A lobster wedged in a crevice will take some deliberate effort to extract. You may use bait to lure them out. Others reach in with their covered hand, grab the beast, twist, turn and hope for the best. Try to grab the arthropod by the base of the antennae horns (antennae tips will break oft) or the bulk of the back… or grapple the entire head. Sometimes a broom handle is useful for prying loose these stubborn marine crawfish, but hooks, spears, and other mechanical devices are illegal.

Suggested reading: Preparation Techniques To Remove Contamination In The Fish You Catch

A “hug” scampering across open ground may be pinned by a hand placed just behind the head.

Panulirus argus, the spiny lobster, is also found in the Caribbean. Like all lobsters, the “spiny” migrates en masse every fall. If you are fortunate to dive upon one of these migrations to deep water, you will boat your limit of 24 lobsters in a few minutes.

Remember, lobsters are nocturnal animals that feed and frolic at night. Be prepared to look for them after dark with a bright, waterproof light.

In Maine, only licensed residents may dive or trap lobsters. Other states and Canadian provinces have open seasons for non-residents.

Preparation is simple. Drop a whole lobster in boiling water, cook for 10 to 12 minutes(depending on size), then eat the tail and claw meat plain or with lemon butter. Some folks like to eat the green fat in the body and suck out the brains… need I be more descriptive?

Scallops, abalone, mussels, geoducks, and clams may be harvested from tide pools and tidal flats. Be certain to follow seasonal restrictions. Generally speaking, shellfish may be safely eaten in the cold months that have an “r” in them — avoid May, June, July, and August for harvesting marine life unless you are certain the bivalves are not contaminated with toxic phytoplankton.

Scallops may be found in plankton-rich bays and other areas that are washed by large, frequent (four times a day) tides. Most states have a size limit and catch limit on scallops —check local restrictions. Usually scab lop season is during the cold months and is most productive in northern latitudes off the coasts of Washington and Maine. Wear a thick wet suit or dry suit to fend off hypothermia.

Rock scallops attach to rock and other structure in dark areas away from direct sunlight. They are often well camouflaged and require careful observation. Break them off, carefully, from their sandstone or granite perch.

East Coast scallops are found in shallow to moderately deep water usually on a sandy bottom — often hidden in seagrass.

Scallops are bivalves, and it is necessary to insert a knife between the shells, near the back hinge. Cut through the bivalve keeping the blade next to the inside surface of one half of the shellfish. In this way, you don’t cut the scallop “button” in half. Once open, cut the muscle (“button”) away from the other half of the shell.

The meat may be stewed, fried, or baked. One simple recipe requires you to place the scallop meat on the half shell. Combine chives, tarragon, soy sauce (two tablespoons to every dozen scallops), a sprinkle of garlic, then fold all into melted butter.

Next, spoon the warm butter mixture over scallops, then pop all into the hot broiler for about five or six minutes. Garnish with parsley, pucker with lemon juice and serve.

Abalone may be found attached to rocks and crevices near the bottom. They are well camouflaged and hard to see. Look for abnormal bumps on the rocks, especially in difficult to reach crevices. Most productive hunting should concentrate on rocks or reefs where wave action and current bring in nutrients. Kelp beds are often productive.

To catch an abalone requires stealth. Sneak up to the animal before it can clamp down on the rock. Stick your prying tool (“an iron”) between the rock and the shell and pry sharply —pop goes the abalone. But if you startle the mollusk, or are too slow with the poke and pry, be prepared to spend much energy and effort to free a deter-mined abalone, unwilling to leave its rocky hideaway.

On the West Coast, abalones come in colors: whites, reds, greens, pinks, and blacks. Blacks are found in shallow water tidal pools and are tough and least desirable. Large Whites, the most tender, are found near the outer fringe of tidal areas to depths of 100 feet or more. Diving for abalone saves you money and provides cheap fun with few restrictions.

Trim all viscera away from the meat, until you have only the light-colored meaty foot. This may be sliced and pounded with a meat tenderizer. Eat the flesh raw or let it cool in the refrigerator for a day. Then, fry the pieces like steak.

Mincing and stewing in chowder is recommended. Many recipes may be discovered with a quick online search.

Mussels area dominant species in the tidal zone. These animals attach to structure with stringy byssal threads. They may be eaten raw or cooked.

Wash a dozen mussels — use a scrub brush to get them clean. Steam them open. Mix the meats with chopped shallots, and stir fry in butter.

For a flavor boost, press in a clove of garlic juice. Spoon the mussels back into their shells, pour over the remaining shallot butter, and zap all in the microwave for about a minute. Serve hot with a dash of lemon juice and/or Tabasco sauce.

Other edible mollusks found in tidal pools and mudflats include mud clams, littlenecks, cherrystones, and oysters. They may be harvested with a clam rake at low tide. Place the bivalves in a plastic bucket, or clam basket.

When harvesting marine life, avoid collecting clams in polluted bays, or areas washed by the effluent of polluted rivers and streams. Eat these shellfish raw or prepare them like mussels.

It’s obvious, should unforeseen events ravage the terrestrial marketplace, tidal areas provide an impressive grocery list for survival. Harvesting marine life makes sense since the ocean is ripe with food in any season: seaweed, octopus, sea urchins, crabs, lobster, clams, fish, and more. With some basic knowledge your survival posture is never bent out of shape. . . so continue learning how to harvest our wet places.