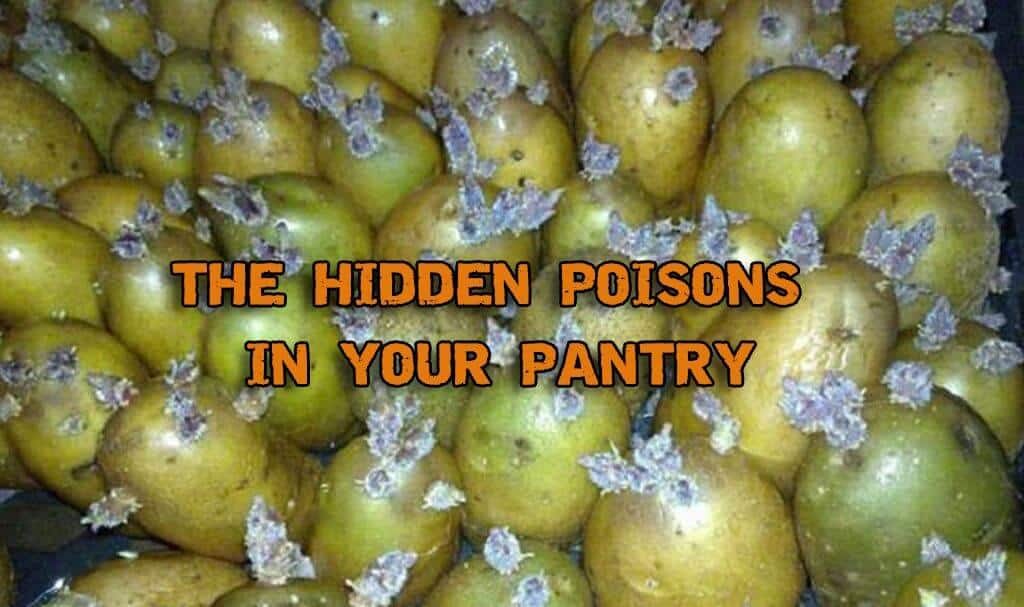 Do you have any poisons in your pantry? Before you answer “No” so quickly, consider that potatoes, lima beans, and peanuts could all be poisonous under certain conditions. Of course, an excess of such things as common salt may also be harmful. Also poisonous are apple seeds, rhubarb leaves, and more. So, read on.

The hidden poisons in your pantry

As you will see here, there are many health hazards that can arise from eating various vegetables and plants. However, this is only happens if people lack the knowledge about the foods they are storing. You can stop 10 people on the street right now and tell them that potatoes can be poisonous and they will laugh in your face. Maybe one in ten will know what you’re talking about. Check out the list bellow and discover more about the hidden poisons in your pantry:

Apple seeds contain cyanide. This is the poison which, as a gas, was used in some states to execute condemned prisoners. The seeds contained in just one or two apples would not hurt you, but there are cases on record of people saving the seeds and taking a lethal dose, between 1/4 and 1/2 cup of seeds.

The pits of cherries, peaches old plums all contain the same poison. The fatal dose for children could be as low as five seeds if the seed capsule has been broken. A man was reported in serious condition after having consumed 45 apricot pits which he had roasted.

The dried root of cassava (for tapioca) may contain 245 mg per 100 grams of the root. Hydrolysis and leaching may reduce the level to 1 mg per 100 grams. Still, a steady diet of these as with many other foods should be avoided. Moderation and variety are key watchwords to follow in planning your pantry.

Potatoes contain the glycoalkaloid (solanine), which is highly poisonous. It concentrates under the skin of sunburned and spoiled potatoes turning them green, and in the potato sprouts. Always peel suspect potatoes to the depth of the green part and boil them. Boiling leaches out the solanine, and it can be discarded with the water because heat alone will not destroy this poison.

The same poison (solanine) is found in a related plant, the tomato. It’s leaves, stems and shoots are very toxic, although the ripened fruit may always be eaten safely.

Another plant in the same solanum family is the eggplant. The leaves, stems, and flowers contain the same Solanaceae alkaloids and the raw fruit may also. So to be safe, always pick healthy, ripe fruits and cook them before eating.

Rhubarb pie is delicious but beware the leaf blades. They contain oxalic acid and soluble oxalates of potassium and of calcium. Again, heat does nothing to remove this poison, and large amounts can cause death. So discard the leaves. Spinach and lambs quarter (a potherb), are examples of other vegetables containing oxalates but eaten in moderate quantities, they seldom cause problems.

In the South, poke greens are popular. Folks there know they must be boiled in two waters which are discarded, or you can get plenty sick. The plant contains the bitter glycoside saponins and a glycol-protein. The ripe berries can be cooked to make pies, but they are dangerous for children to eat raw.

The raw young shoots of asparagus have caused dermatitis. The red berries of the same asparagus plant have caused poisoning in cattle, and again, children should be taught not to eat this one either.

Onions in large amounts, or as the sole ingredient of the diet over a couple of weeks can cause severe problems. There have been reported deaths in cattle which ate large amounts. The toxic principle is thought to be an alkaloid which causes severe anemia in man, as well as digestive disturbances and/or stomach upset.

Mustard greens can be a springtime treat, but be prudent. Large amounts can cause severe irritation to the mucous membranes of the intestinal tract. Also, mustards, along with cress, and all the cabbage family of plants, can accumulate dangerous levels of nitrates and cause goiter problems.

All the above-listed foods will harbor hidden poisons in your pantry that can cause serious health issues during a SHTF emergency when you rely solely on the foods you stored. The most worrying fact is that the vast majority of people don’t even know about their existance.

Vitamins and minerals are essential for life and good health. True? Of course, but what some people may not be aware of is the fact that most minerals, and the fat-soluble vitamins, especially A and D, stay around in the system, and are not excreted as readily as the water-soluble vitamins.

They enter the body’s cells and accumulate, and all have an upper limit where they become toxic. This rarely occurs when receiving these essential nutrients from food. It happens when taking these substances in pill form, as a supplement to the diet, without due regard for quantity taken in.

The deal with multivitamins

Keep iron pills and vitamins containing iron away from children. As few as six to twelve pills can cause death in a child. In fact, iron in pill form is second only to aspirin as a leading cause of poisoning in children and can cause problems for adults as well, taken in mega doses. (Men are more susceptible than women, because of their lower requirement for iron.) Measurements are important. Take no more than one RDA of the minerals and fat-soluble vitamins per day in supplement form. Remember, it’s the toxic level of vitamin A in polar bear liver that makes it fatal for humans to eat.

In times now past, mankind has had to deal with several types of food poisoning which are rarely seen with the FDA looking out for our food supply. The effects following the pasteurization of milk and the widespread use of refrigeration have also lessened the dangers. For instance, ergots are fungi which parasite the seed heads of several cultivated grains and native grasses. Modern methods of handling and cleaning the grains, and federal laws against the selling of grain containing more than .03 percent ergot scleroria by weight, have made problems rare in this country.

A similar fungal disease concerns some aflatoxins which consist of a family of 14 naturally occurring toxins. These are the unknown poisons in your pantry. They mainly attack cereal grains and some other crops such as peanuts and cotton-seed (a major source of cheap cooking oil) when these crops have been exposed to a high moisture condition. Thousands were sickened in Russia during WWII by eating moldy grain which had been left standing in fields over winter before harvesting. This substance is associated with liver cancer and is the suspected causative factor in many deaths of children in Thailand, according to a study done there.

Many kinds of these mycotoxins are relatively stable and survive the processing and cooking of foods containing them. They also survive in the food chain, and cattle, sheep, pigs as well as several game animals are susceptible in addition to man. Rainbow trout seem to be particularly prone to concentrate the toxin. Of special concern should be peanuts and peanut butter made from uninspected peanuts.

Trichinosis organisms may be present in raw pork. Salmonella organisms may be present in raw meat, fish or poultry. Cooking makes the difference here, and it makes them safe to eat. But, care must be taken in handling. If you lay these contaminated foods on a kitchen counter or cutting board, and then cut bread, or vegetables for salad, or other foods which are not then cooked, sickness can result.

Wash your hands after touching these foods and be sure to wash thoroughly every place they touch before they are cooked. It would be a wise idea to have a separate board just to cut bread and other non-cooked items.

Botulism poisoning is caused by anaerobic organisms, especially in spoiled home-canned vegetables and meat. It is also found (rarely) in commercially canned tuna and sausages. Most of the time these cannot be detected from odor or taste. The toxic substance can be destroyed by boiling from 10 to 15 minutes.

Botulinum toxin is said to be one of the most deadly biological poisons known to man. A fatal dose can be as little as .1 milliliter. (This is about the size of a single crystal of salt.) Another food poisoning is caused by Clostridium perfringens. It is developed in meat or meat products which have been at room temperature for several hours. It is especially formed in ham, tongue, dried meat, sausage, fish products, milk, and eggs. Re-heating will not destroy all these toxins, so throw it out to be on the safe side.

Some plants you may find around the house are worthy of mention: Mistletoe, Oleander, and Dumbcanes (Dieffenbachia) are all poisonous. Oleander is probably the most dangerous. There are stories about boy scouts who died after roasting hot dogs on oleander stems.

This article is intended merely as an introduction for general knowledge about the hidden poisons in your pantry. The implications for long-term survival should be obvious. If law and order were to break down in this country, each one of us could become totally responsible for our own food supply.

In any case, it is always useful and important to find out all you can about what can be harmful, as well as what is good food.

1 thought on “The Hidden Poisons In Your Pantry”