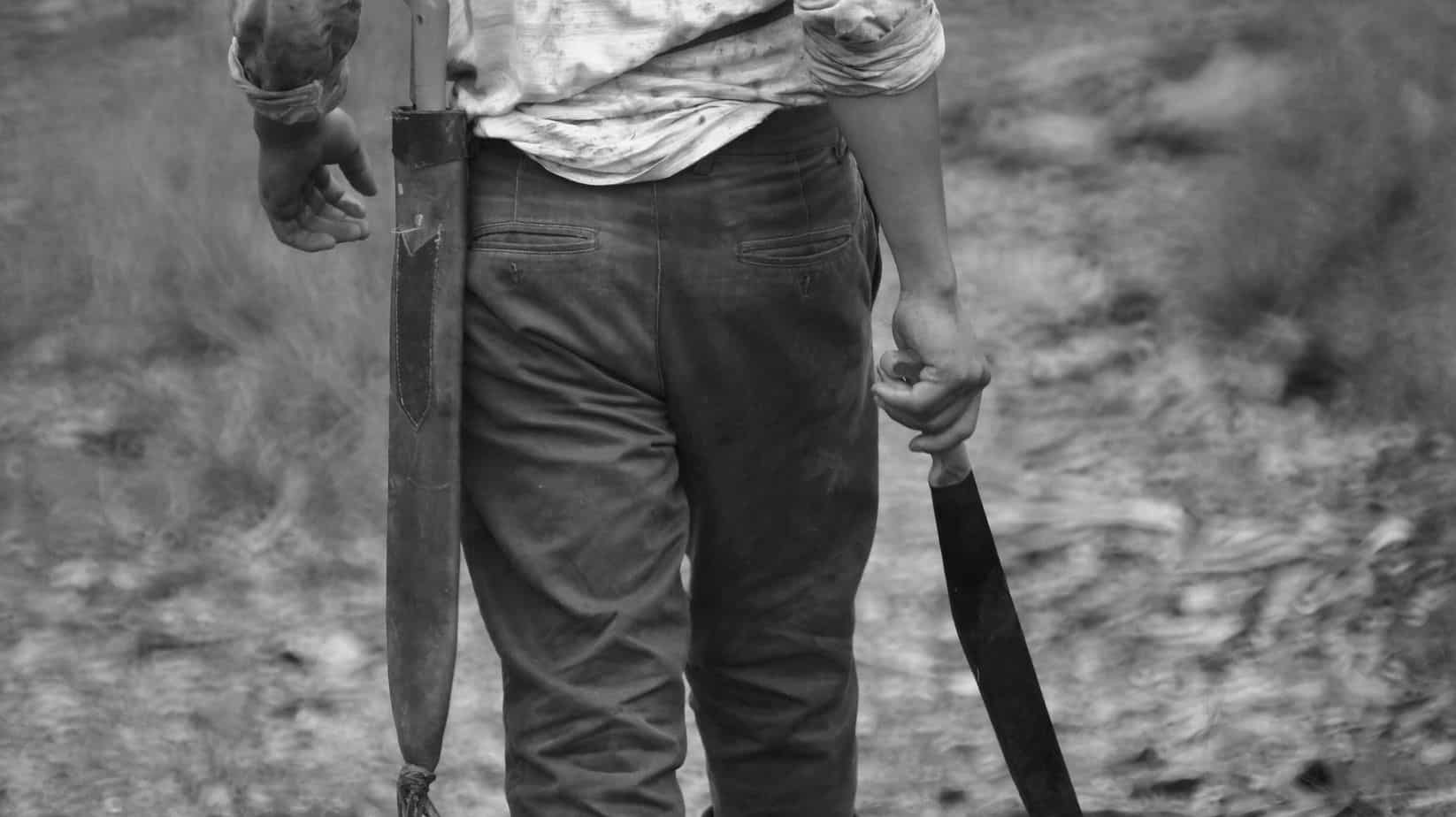 For the woodsman and the outdoors enthusiast, a good machete can be a great survival tool. A machete can do the same things a knife and an axe can, although chopping down large trees is not ideal. However, after years of using various machetes, I can vouch for it as being a good and dependable tool in the wilderness.

🪓 The way of the woodsman 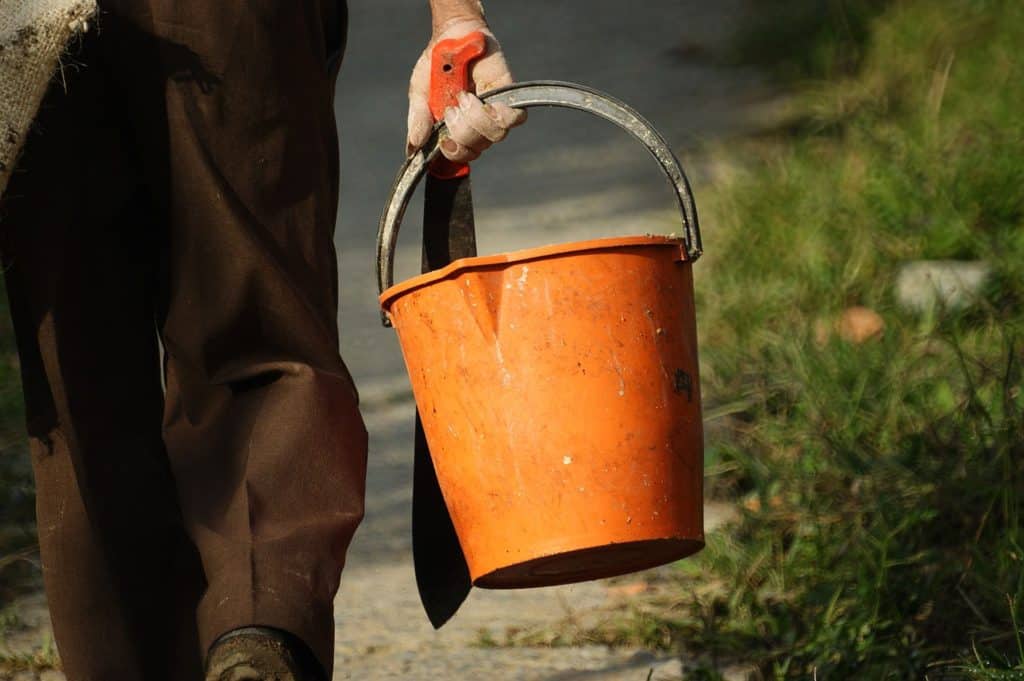 Although I can no longer recall the name of the book or the exact locale, it was a Bradford Angier type which dealt with outdoor living in the far North —perhaps Maine, or lower Canada. What did stick in my mind was the author’s admiring description of the seasoned old woodsman he met and befriended there during the early 1920s:

“Ed was then in his sixties, but moved with the steadiness and grace of a much younger man, on muscled legs which seemed tireless. His normal dress consisted of baggy wool trousers and a checkered flannel shirt covered by a non-descript mackinaw, high laced boots, and a floppy felt hat. Thrust into a wide leather belt was his prized Luger pistol, and in his right hand was his ever-present axe. He declared it his most valued possession, and he would go nowhere without it. Called from cabin or fireside on any errand, even if the distance was only a few yards, he would pick up the axe and take it with him.”

To a person accustomed to the outdoors, there is nothing at all remarkable in this description. The clothing worn by the venerable outdoorsman was woods-comfort, able in that cool northern climate.

The Luger pistol may seem a bit out of place from a present-day viewpoint, but in that era, they enjoyed considerable popularity with woodsmen in both 7.65mm and 9mm caliber. Even less remarkable was Ed’s reluctance to leave his axe behind. The author goes on to relate how he could build virtually anything needed with the axe, from a pine bough bed to a bear trap or lean-to shelter. Highly skilled in its use, there is little doubt that Ed could, in an emergency, use it for more delicate chores such as skinning a rabbit or splitting a fish. Kept sharp and cared for properly, the axe is a nearly perfect woodsman’s tool.

What the axe is to the woods wanderer or survivalist of the northern forests, the machete is to the outdoorsman of the American Southwest. Not as ancient in origin as the axe, this useful fool is essentially a large, heavy knife best suited to light chopping duties.

The first men to feel the need for such a tool may have been the Spanish Conquistadores of the 16th century, who found rough going in the jungles of Central and South America. The broadswords they used so effectively for conquest were less than ideal for carving a path through the thick secondary growth of a tropical rain forest.

The usual fighting sword of those brutal times was not only too long, it was too thick and heavy as well. It isn’t hard to picture a sweating Spaniard grinding down and hammering out a less unwieldy blade from what was formerly a weapon.

In time, the versatility of these blades became so appreciated they became the standard agricultural tool of the region. The machete in various shapes or lengths is indispensable for harvesting sugar cane, bananas, and other tropical crops.

From past to present, it has also served to gather firewood, construct a thatch hut, and even to hew a dugout canoe from a suitable log. Being a sturdy, single-edged chopping instrument, it can serve as a weapon if need be. I’m told that the Campesinos of rural Mexico still settle disputes with the traditional, ubiquitous machete from time to time. 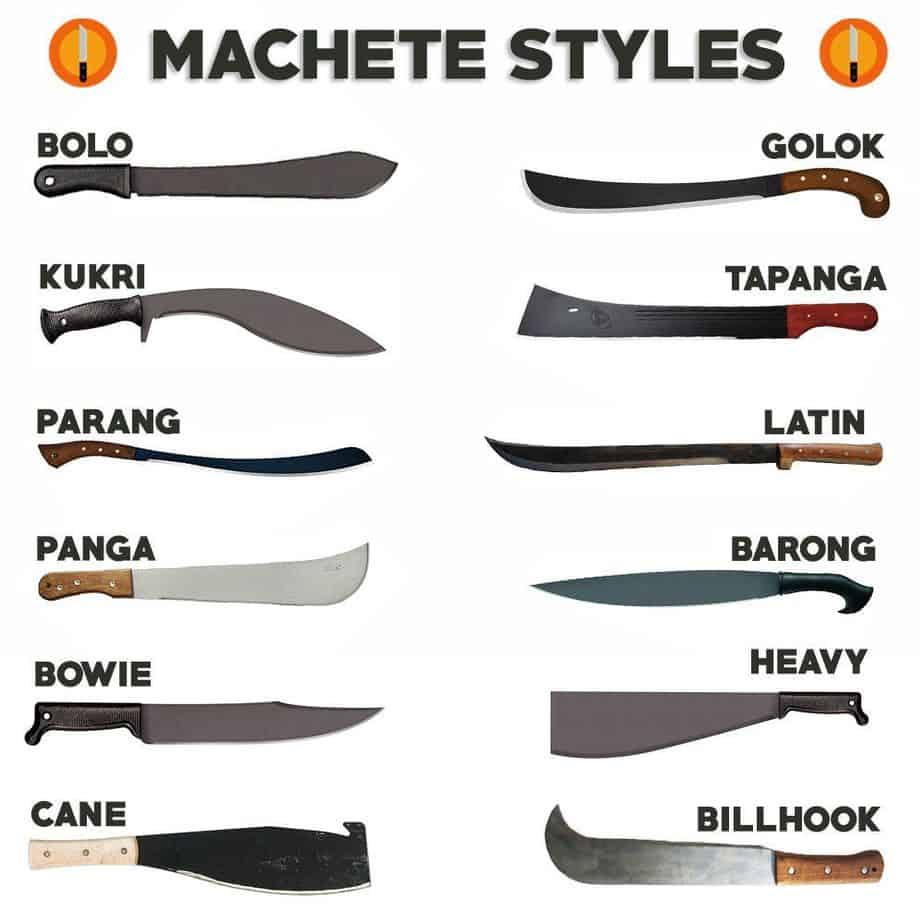 Though machete blades are subject to slight regional variations, especially south of the Rio Grande, the most common type seen in the United States is the famous Collins type. These originated in World War 2 for use in the Pacific Theater, and afterward, many thousand were sold as surplus.

Most were brand new and showed no use, and came with a well-built plasticized sheath which held the machete safely and securely. Astute buyers snapped these up, and while the machetes can still be found, the excellent sheaths are gone.

The average “surplus” sheath in many of today’s vendors are cheaply made, shoddy canvas types of little merit and no value. Suppose you can locate one of the good WW2 jobs, buy it and hang onto it. Failing that, you will have to make your own of leather or other suitable material. Good quality, sometimes even fancy sheaths, are available across the border in Mexican leather shops.

Paradoxically, the machete you may encounter wearing a worthless sheath is likely to be a good one. There are no trade secrets in building a machete, and several companies have made very serviceable ones. The two I have on hand are of WW2 vintage, stamped “U.S.” and “Ontario Knife Co.”

The shorter one has a straight, bellied blade of mild tool steel measuring 18 inches in length. Blade thickness is a uniform .122 inch and is plainly a steel stamping. Handle material is an unknown but tough black plastic held on by four large rivets. The lower end of the handle features an elongated spur for grip security and is pierced for a lanyard. This is by far the most common, and perhaps the most useful machete.

Built for heavier duty, the longer blade is as curved as a pirate’s cutlass and measures 22 inches in length. Hardly thicker, it is .125-inch thick and curves to an upswept tip. The greatest width of both blades is about 2 ¼ inches, but this longer one has noticeably greater “chopping power.” I’ve used it on tree trunks and branches up to six or eight inches in diameter, and it makes short work of them.

The lighter blade will do so too, but with more effort. Perhaps on long foraging and backpacking forays, the 18-inch machete should be chosen for its lighter weight and greater convenience, but in any semi-permanent camp, the longer blade will prove its worth. Neither will add more than a couple of pounds to a pact, sheath, and all.

If you do a little research online, you will discover that today’s market offers various types of machetes with blades varying from one country to another. I strongly recommend reading about the various styles and not get one just because it looks fancy. Every design has a particular use in mind, and you may find it difficult to use it during your camping trips.

Because the vintage machetes are constructed of mild steel, they will dull easily unless used exclusively on wood. When utilized to dig traps, solar stills, bank tires, or dig edible roots, the blade will pick up nicks and scratches.

Naturally, this occurs when the blade strikes the inevitable small stones or gravel. The proper way to sharpen a machete is with a file, just as one sharpens a garden hoe. Using fairly short, sweeping strokes, hone the edge to the desired angle, then carefully file the other side. Use caution when filing against the edge to avoid a cut finger or thumb. The coarser the bevel, the longer the edge will last, at least under normal circumstances.

Some desert survivalists prefer to hone the forward portion of the blade to a coarse edge for digging and then use a steeper bevel toward the handle for a razor-sharp cutting edge.

While conceding some merit to this, I find it simpler to keep my entire blade as sharp as possible, retouching it when necessary. Under no circumstances should a machete be taken afield without a sharpening file strapped to the sheath. While it probably could be re-sharpened on a handy rock or boulder, this is a time consuming, tedious chore and may use up more energy than you care to expend.

❔ What will the machete do that an axe won’t?

Probably nothing of any importance, but it is both lighter and more convenient to carry. In the arid Southwest, heavy timber is lacking, and the axe may be something like overkill for the light vegetation found there.

The greatest advantage the axe has is that it may be used two-handed, while the machete is strictly a one-hand proposition. This makes prolonged chopping tasks tiring, but unless you are building a log cabin, it doesn’t matter. The machete does very well for firewood and light shelter construction. Percentage-wise, it may possess as much as 80 percent of the usefulness an axe does. 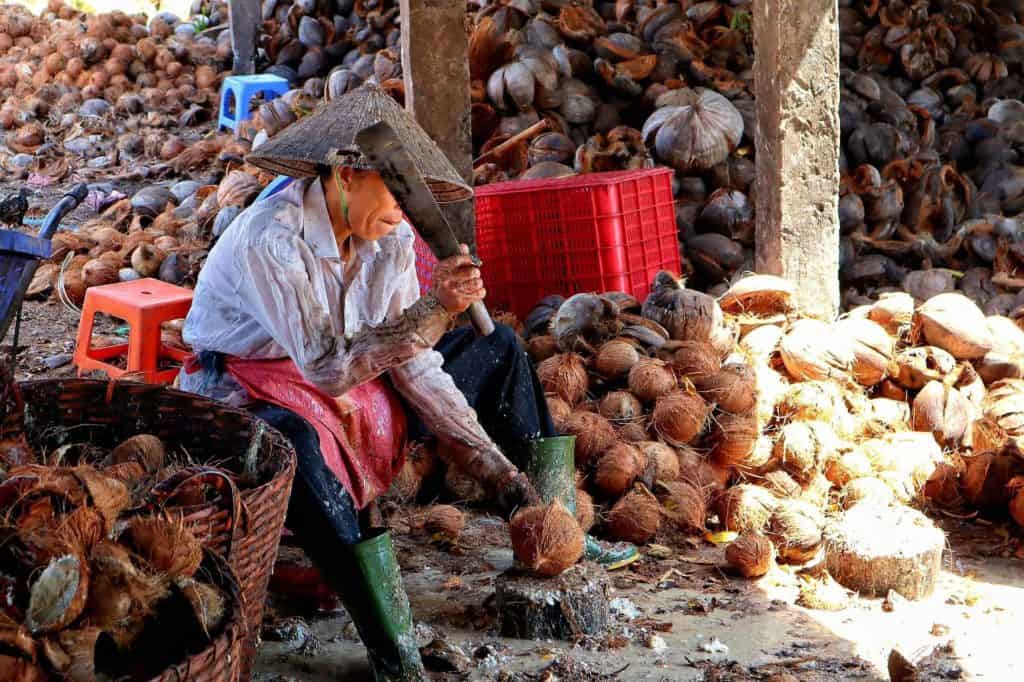 In the area of initial cost, the machete holds the advantage and can be purchased much cheaper than the price a quality axe demands. Inherently cheap, the machete is almost expendable. Even so, use caution when buying one, as inferior blades undoubtedly exist. Check for handle fit and straightness, and be sure to flex the blade. Although made of mild steel, a good machete is tempered, and consequently very “springy.”

Don’t be discouraged by a rough finish or an excess of tool marks. This is typical of the breed, and so is a crude parkerizing to prevent rust. Blade wear and humidity will contribute to rusting, and it may be a good idea to spray paint the entire blade with black enamel. This finish wears well around saltwater and can be renewed in a few minutes.

A sharp machete can also skin a rabbit or clean a fish, dig a hole for any purpose, or perform any number of impromptu but necessary chores. Swung resolutely and skillfully, it may even serve as a secondary line of defense, and can be a formidable weapon. Like the northern woodsman’s axe, it is the mark of the desert survival expert.

🖊️ Useful resources to check out: