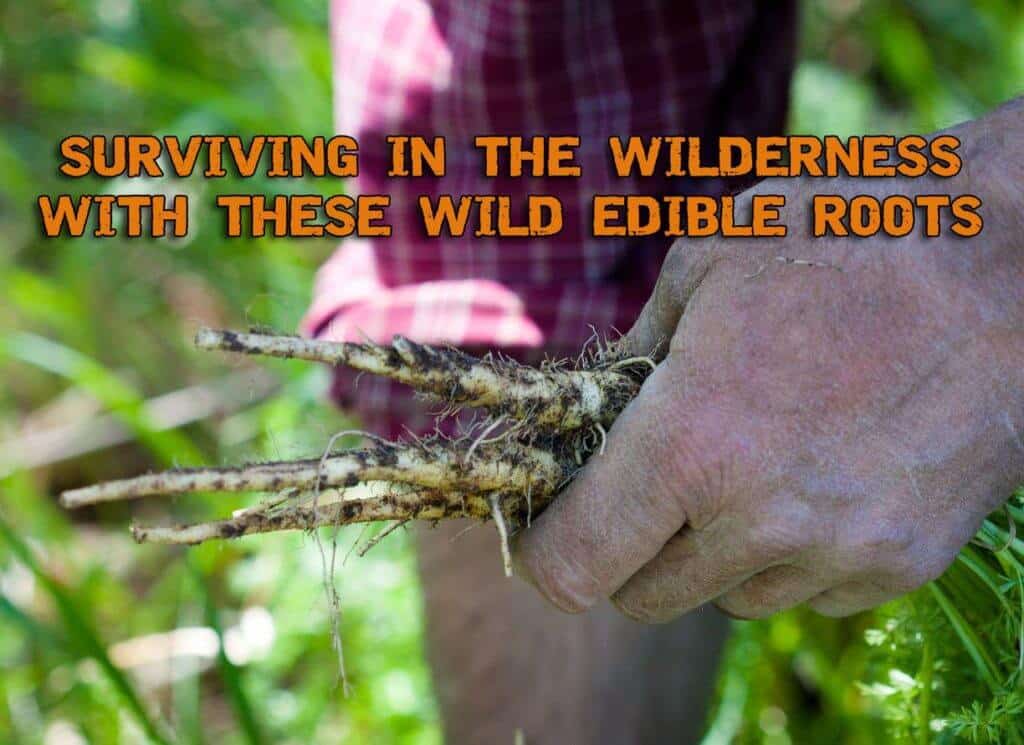 Wild edible roots, tubers or rhizomes have been the staple of many cultures throughout history. The United States too, would be lost without potatoes. The following wild edible roots will assure your survival if you ever find yourself stranded in the wilderness.

Early Indian tribes guarded, often violently, their gathering areas to protect wild root crops. In Idaho, the Bannock War in 1878 was fought over an area now referred to as the Camas Prairie. This area produced the blue camas bulb in abundance, which was the staple of the Bannock and Shoshone Indians of the area. When white settlers started plowing the lush crop producing, the Indians resisted with vengeance, but lost this key part of their livelihood.

The value of wild edible roots and the first pioneers

Beginning with Lewis and Clark, early mountain men quickly realized the importance of wild subterranean edibles. When Lewis and Clark entered the Lemhi Valley in East Central Idaho,  they traded with the Shoshones for large tortilla type biscuits the Indians called cous. These “biscuits” were said to be as large as a saddle, were made from what is now commonly called Biscuitroot.

Further to the west in eastern Washington and Oregon and in western Idaho, Lewis and Clark also shared with the Nez Perce blue camas bulbs which had been cooked in large steam pits.

One of the sought after tubers were the Yampa root. Due to its importance to the early mountain men and Indians, Yampa has left its name on a river valley and town in what is now Colorado.

The first years the Mormon settlers were in the Utah Territory in the Great Salt Lake Valley, the Sego Lily, the wild plant with a highly starchy edible bulb, is reported to have saved their lives when their crops failed. It is now Utah’s state flower.

While plows and cultivation have destroyed many of the productive foraging areas making it difficult to sustain life as was done by the early Indians, many areas still produce abundant root crops to supplement one’s diet. Some areas will provide foraging for the survivalist in an emergency situation.

Most wild edible roots, tubers, rhizomes and bulbs are high in starch content providing carbohydrates. This fits a much-heeded gap in a wilderness foragers diet which generally consists of meat and leafy greens with very little sugar intake.

Before feasting on wild edible roots

Wild plants to be eaten should be positively identified and used sparingly to start as a person may have an allergic reaction to a wild plant. It may be the case just as they would a domestic plant (strawberries for instance).

Anyone planning on using wild foods in an emergency situation or on wilderness expeditions should experiment and use them prior to the “emergency.”

A taste must be acquired for many of the wild plants the same way a taste has to be developed for some domestic plants and is much easier accomplished when not under the stress of’ a “bad situation.”

The following plants are commonly found in the inter-mountain region stretching to the West Coast and are abundant and easily identified. They are not only edible but palatable.

Depending on the variety, species and elevation where underground edibles are obtained, most will be small in size. This compared to what we are used to gathering in our gardens and grocery stores in terms of carrots, turnips, potatoes, etc.

The wild edible roots are generally best flavored when roasted although some, like Blue Camas, are best cooked in a steam pit.

Two easy methods of preparation to preserve roots for later use are:

1. Roasting and drying which allows nags to be eaten as is or reconstituted and used on the trail without much preparation.

2. Making ”root cakes” (cous as the Shinbone Indians called them) by roasting the roots, mashing them together in cakes similar to tortillas and then drying. These can also be eaten as is or reconstituted by placing in water and/or adding to stews and salads, etc.

Habitat: Moist areas in open meadows, along stream banks, in mountain canyons. Any area that is moist at least through the month of June.

Flowers: May to July—white flowers.

Size: 4 to 24 inches at the time of blooming, depending on elevation and latitude. Rhizome length will vary from 1 to 3 inches.

Edible Parts: Rhizome is very hard and chalky until cooked. Bistort should be peeled then roasted or cooked in a steam pit. A species of this plant is cultivated and used in Japan.

Flowers: March through May, generally as soon as the snow melts. Produces white flowers.

Size: 1 to 3 inches at the flowering stage.

Edible Parts: Bulbs may be eaten raw or cooked in any manner as potatoes. Peeling will remove any bitter flavor that might be present. Generally too small to take the time to peel.

It may be roasted and mashed in root cakes for preservation.

Related article: Foraging for Edibles In The City

Flowers: From April to August depending on elevation and latitude. Flowers are white, cream, yellow, purple, pink, salmon or scarlet.

The starchy bulb is the part most used and may be eaten raw, roasted or creamed. The dried seedpods often stay into winter allowing a long gathering season if the ground is not frozen.

Flowers: April-August depending on Latitude. One of the first flowers after the snowmelt. Dainty flowers are white with pink tint turning darker as the flower ages.

Edible Part: The entire plant is edible. The greens and flowers can be eaten raw or boiled.

The root can be roasted, boiled or eaten raw. It’s better flavored if peeled although they are often too small to peel.

Recommended article: Tips For Foraging Safely During A Survival Scenario

Habitat: 8 of the 9 species of Yampa are found from Alberta and British Columbia in the north-south to Arizona and New Mexico and from the Pacific Coast to the eastern foothills of the Rocky Mountains. It can be found in open meadows and hillsides—generally moist areas in the spring and early summer months although the area can become bone dry in July and August when the plant is in bloom.

Flowers: Yampa blooms from July to September and has white flowers.

Edible Pan: Tuber is edible and can be gathered from May through September, depending on elevation and latitude although it will be its best quality once the plant has bloomed, generally July/ August.

It may be eaten dried, roasted, boiled, raw or fried.

Habitat: Out of the 80 species of Lomatium in the western states, 36 are in California alone. Biscuit Rout is an early spring plant flavoring dry plains, open areas and often rocky soil, preferably southern exposures although one species seems partial to lodgepole stands.

Flower: Late April through late June. The plant is generally dead and gone by mid-July. The flower is generally yellow or yellow-green, white or white green.

Size: 2 to 12 inches high when in bloom depending on soil condition. Roots range from turnip to radish shape to long and slender, depending on species. The turnip shaped roots are 2 to 4 inches long and 1/2 to 2 inches in diameter. The long root is 1/4 to 3/4 Inches diameter and 4 to 18 inches long.

Edible Part: Roots may be eaten raw, roasted, boiled or steamed. They may also be used in stews. The roots are covered with a thin black skin which should be removed before using. The Inside is a cream white and fibrous. Biscuit Root can be roasted and then mashed into root cakes or dried and ground into flour then made into a tortilla-like cake.

CAUTION: Both Yampa and Biscuit Root are members of the UMBELLIFERAE family which also contains poison and water hemlock. Positive identification should be made before using either of these plants. None of the Lomatium species or the Perideridia species are reported to be poisonous.

Habitat: Rich, moist soil—often in runoff areas, Glacier Lilies are often found poking through the snow before it is niched off. This species ranges from British Columbia east into Montana, south to Colorado and west to northern Oregon.

Two other species, E. albidium and F. americanums range from Ontario east to Nova Scotia, south to Florida and west to Texas although they are not common in the Atlantic states. They generally favor wooded areas or are found in adjoining open stands of timber.

Size: 3 to 12 inches at the flowering stage, depending on species and soil conditions. The bulb ranges from 1/3 to 3/4 inches in diameter.

Edible Part: The entire plant is edible. The green parts and seed pods are delicious raw or boiled and the bulbs are used most often boiled, roasted or eaten raw.

CAUTION: Some edible plant books state that if eaten raw and in quantity, Erythronium may act as an emetic. I haven’t had a problem with this, but it may be best to start slowly.

As you can see, with the proper knowledge, the wild food forager can begin gathering in early spring and continue into the fall safely. Getting a meal rich in carbohydrates can become an easy task if you manage to properly identify the wild edible roots listed in this article. Also, by following our eating and cooking tips, you should be on the safe side when trying these wild edible roots.

On Monday, we will publish the second part of the article listing the other wild edible roots that every forager, survivalist, and prepper should know about. Stay tuned!