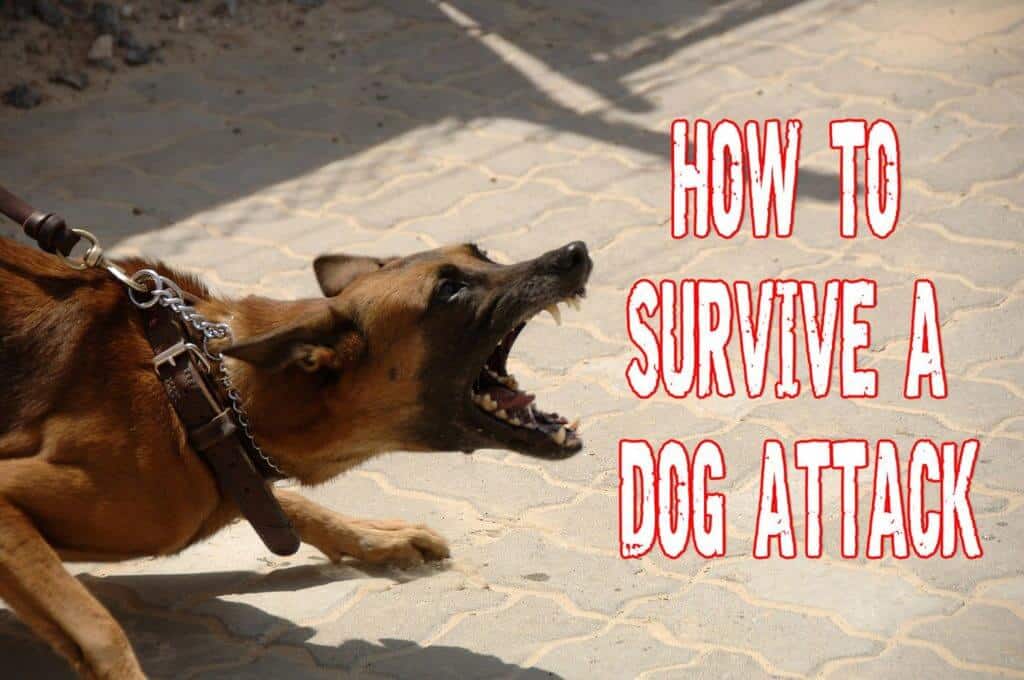 A dog is a man’s best friend but it can also be its worst enemy. The majority of dog attacks occur because of bad owners and their lack of commitment towards their dogs. Since these types of attacks will continue to occur, regardless if it hits the fan or not, you should learn how to survive a dog attack.

Currently, due to the large population in our country, the dog is considered the most dangerous animal in our living areas. Even more, there are certain breeds that are responsible for more than 50% of known deaths.  Pit bull type dogs and Rottweilers are perhaps the most dangerous of them all. It is estimated that someone is bitten by a dog every 2 minutes.

It is more likely to be attacked by a dog during your lifetime than any other wild animal you could think of. And unlike wild animals, dogs have lost their fear of people and will engage you if provoked.  If you enter its territory any breed of dog can become unpredictable. It is better to learn how to survive a dog attack because this knowledge can be used as an advantage when dealing with an angry canine.

Before we discuss how one can survive a dog attack it’s better to know how one could avoid such attack. It’s better to prevent this scenario rather than figuring out how to escape unharmed.

How to avoid a dog attack

Contents hide
1 How to avoid a dog attack
1.1 Related reading: Sugardine – A cheap homemade antiseptic
1.2 What to do when attacked by a dog
1.2.1 Suggested article: Things you should not do after SHTF
1.2.2 What to do after you survive a dog attack
1.2.3 Other Useful Resources:

There are certain people asking for it and I can’t understand the pleasure some get from teasing a dog. It should be common sense not to taunt a dog, especially one that is chained or confined. You should avoid any dog (regardless its breed) that is restrained.  These types of dogs are usually more aggressive and can cause serious injury. If you are approached by a potentially dangerous dog, avoid doing the following:

In addition, you should observe the animal’s body language. If the dog growls, that’s a clear sign of aggression. The same goes for bared teeth and you should be ready to act if it moves towards you. The position of the dog’s head is also a telltale sign. If the head is held high or low, the dog is most certainly in aggressive mode. If the head is even with its body, the dog is preparing to attack.

To survive a dog attack you need to be alert so you can react quickly. At first, you need to stand firm and remain calm. As I said before, you shouldn’t do any sudden movements. If you run, the dog will definitely chase you. Turn sideways to avoid facing the dog directly. This will make you nonthreatening for the animal and you can still observe the behavior of the dog using your peripheral view.

If the dog continues to approach, use loud commands such as “Stay” or “Down” to see if it makes it pause. However, you should not point your finger at it or expose your hands.

During this stage most people fail to survive a dog attack because fear takes over. If you let your body be controlled by fear you will not be able to assume a nonthreatening position and you will continue to provoke the dog.

Stay calm and gradually back away from the animal without making sudden movements or changes in posture.  When there is enough distance between you and the animal, go to a place out of the sight line of the dog.

Even if you follow the above suggestions, the dog may still attack you. To survive a dog attack follow the actions described below.

What to do when attacked by a dog

When it certain that the dog is targeting you, you need to gain immediate control and subdue the animal when it attacks. The first thing you need to know is how a canine bites since this will help you survive a dog attack. It will never chomp down and leave you be when enraged. It will grip in, shake its head and tear flesh.

The most important thing is to protect your face, throat and chest. If you are exposed to the bite, you want it to bite the thickest part of your outer legs. This will give you the opportunity to attack the dog’s more vulnerable parts. Even so, make sure you protect the areas of the groin and inner thighs since the bite can do some serious damage.

To survive a dog attack, you need to limit the dog bites to areas of our body that are protected by thick skin. In addition, if you have extra layers of clothes, wrap them around your arm and offer that to the enraged dog.

If the dog clamped down on you, turn on the animal and drop your full weight onto its body. Try to slam your knees or drop your elbows directly onto the dog’s body. Aim for the ribs as they break down easily and also and strike its head. Target the back of the neck or the base of the skull. You can also wrap your forearm around its throat and prevent him to bite you even more. This may be complicated as you need to avoid its teeth while going for the grab.

Suggested article: Things you should not do after SHTF

Some suggest reaching for the dog’s hind legs and lift them off the ground. This will incapacitate the dog as it will lose its ability to move and bite you further.

To survive a dog attack, dog trainers recommend using your coat or shirt to cover the dog’s head. This will subdue it quickly and you will prevent additional bites.

These suggestions work only if you are attacked by a single dog. When dealing with multiple dogs, do not try to subdue each dog using your body weight. What you need to do is strike each approaching dog individually. Target the dog’s nose or eyes and if possible grab them by one of their limbs. The dog pack will sense that you are not vulnerable and will eventually back off and retreat.

If you have a weapon, use it! Anything is better than throwing punches or trying to grab the animal. A dog spray or a dazer should keep the dog at bay and give you enough time to distance yourself from the threat.  Any item you carry can become a weapon during desperate times and the trick is knowing how to use them.

What to do after you survive a dog attack

If you managed to subdue the dog or it stops its attempts to bite, back away slowly. Check yourself from injuries as due to adrenaline rush, it might not be obvious at first that you need medical assistance. Call the police and the local animal control as the dog needs to be controlled. If it’s no longer a threat for you but that doesn’t mean that it can’t become a threat for others.

What follows next is up to you, and if you want to press charges you need to find out who owns the dog.  Even more you should get documents showing it has received shots against rabies. Dog bites tear the skin and you may require stitches. Depending on the bitten area, esthetic surgery may be required to repair scars.

These are all things you should handle once you survive a dog attack and the hustle may continue further. Children will often require therapy to get over the initial shock and some will also require additional counseling to get over their fear of dogs.

9 thoughts on “Tips on How To Survive A Dog Attack”