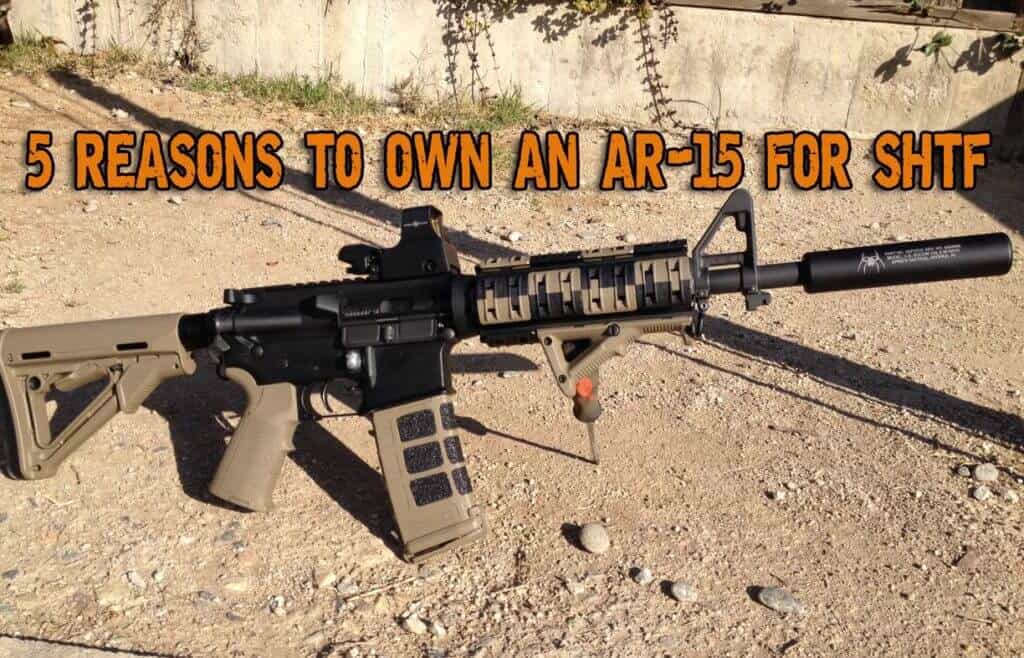 As vilified as it is by most of the major American news media outlets, the simple fact remains that the AR-15 is the most popular centerfire rifle sold in the United States today. In many regards, the AR-15 is the ‘modern day musket’ or the ‘musket of the 21st century.’ In other words, it’s the rifle of the every man (or woman) in today’s world.

In a major disaster or SHTF scenario, an AR-15 will be an invaluable asset to have. This is because when disaster does strike and chaos envelops your city or area, once ordinary people are going to take to the streets in desperation, and they will turn to violence to get what they want.

You must be fully prepared to defend yourself, your family, and your possessions, and you need to have the proper tools and weapons that enable you to do that.  As we’ll soon see, the AR-15 will be one of the very best weapons that you can use to defend yourself and your family against multiple attackers, and it’s also very suitable for more practical purposes beyond that as well.

Now if you’re reading this article right now, chances are you don’t yet own an AR-15 but are at least entertaining the idea of putting the money down for one.  Being on the fence, you’re probably questioning the necessity of owning one or struggling to justify the cost.

That being said, there are many reasons to consider buying an AR-15 even if you’re not much of a ‘gun person,’ and we’re going to discuss five of those reasons today.

Here are the top five reasons to own an AR-15:

1. It’s One Of The Most Accurate Semi-Auto Rifles Out Of The Box

The AR-15 is widely regarded as being a highly accurate platform right out of the box, and its accuracy being generally considered to be slightly superior over comparable rifles such as the AK-47 or the Ruger Mini-14.

In fact, the accuracy of the AR-15 right out of the box is one of the biggest selling points of the platform.

Even a basic budget AR-15 out of the box, such as the Ruger AR-556 or Smith & Wesson M&P15 Sport II, will offer you decent accuracy.  You can further improve the accuracy by using a rigid upper receiver.

Standard AR-15 rifles will come with a ‘flexible’ upper receiver that is possible to be bent by bare hands (with a very strong amount of force, obviously), but a stronger and more rigid upper receiver will lend itself to much greater accuracy.  You can check out the Grab-A-Gun uppers for sale if you decide to eventually upgrade your AR-15 should you indeed decide to buy one.

2. It’s One Of The Most Customizable Guns On The Planet

The AR-15 is one of the most customizable firearms on the planet.  In fact, there are only three other firearms that rival it for customizability: the 1911, the Glock pistol, and the Ruger 10/22.

Why is having an easily customizable rifle so important?  Well, it’s not a necessity.  But it’s undeniably something nice to have because it means that you can make your rifle exactly the way you want it to be, so it’s more comfortable and easy to shoot.

Everything from the sights to the trigger to the stock to the forward assist to the furniture to the upper and lower receivers to the barrels and so on can be easily switched out on an AR-15.  There’s a reason the AR-15 is often referred to as the ‘lego’ of the gun world.

So to put this into perspective, if you’re not fully comfortable with your AR-15 out of the box, there’s absolutely no reason to fret because you can easily customize it so that it is.  By simply switching out the stock or the fore grip, you can naturally make your AR-15 inherently more comfortable for you, and therefore easier to shoot.

Customizability and accuracy aside, the AR-15 is already an incredibly ergonomic rifle out of the box.  It’s lightweight and weighs around six pounds unloaded, which makes it easy to wield even by women and smaller statured shooters.

The weapon is also easy to operate, as to charge the weapon you simply need to insert a magazine and then hit a button on the left-hand side.  The grip is also comfortable and adding a forward grip makes it even more so.  The stock is adjustable (so long as you have an adjustable stock installed, which is easy), so it can easily accommodate different people.

All in all, the AR-15 is definitely one of the most comfortable rifles to shoot and operate, and the limited recoil that we’ll talk about here next only improves that.

For an SHTF situation, this is important for a great number of reasons.  For one thing, it means that those with little to no experience with the weapon will be able to shoot it and not feel like they don’t know what they’re doing.  Yes, operating the AR-15 will ALWAYS be easier after training and experience.  But often times, people who fire the rifle or carbine for the first time are highly surprised by how easy it is to shoot.

It also means that the rifle will be good to yield for defensive purposes as well.  The AR-15 is designed to make reloading quick and convenient, plus the natural ergonomics (and accuracy of the gun) will give you a phenomenal advantage when defending yourself against multiple attackers.

This is a major plus, as it contributes to how easy the AR-15 is to shoot.  Many novice shooters especially fear shooting guns because of the perceived recoil that they believe they will feel.

Fortunately, recoil is incredibly minimal with the AR-15.  Part of this is because of the 5.56x45mm NATO round that it fires.  It’s a caliber that’s known for delivering minimal kick, and the design of the AR-15 also lends itself to minimal recoil as well.

Minimal recoil is important because it makes faster and accurate follow up shots very easy.  It also means that you’ll have a more pleasant shooting experience with the weapon, which in turn means you’ll be more willing to practice with it often.

Now granted, recoil doesn’t matter as much in a true life-or-defense situation where your adrenaline is going to be pumping hard.  But still, limited recoil will be to your advantage.  An AR-15 in 5.56x45mm NATO is naturally going to produce much less kick than a .308 rifle such as the M1A or a 7.62x54r rifle such as the VEPR.

Faster follow up shots aren’t just good for the range. They are good for defense too, and that’s what helps make the AR-15 such a valuable defensive arm.

The fifth and final reason to own an AR-15 for SHTF purposes is very broad and simple: it’s one of the most versatile and practical guns on the planet.

You can’t use it for concealed carry, obviously, but you can use it for casual target shooting, for tactical training, for home defense, and for hunting (on appropriate game, you’ll need an AR-10 in .308 for larger animals such as elk).

Many people neglect to see the value of the AR-15 as a self-defense or home defense weapon in particular.  But the truth is that it’s an excellent tool for the task.

Not only is it easy to wield and shoot like we discussed previously, but a 55 grain soft point 5.56x45mm NATO round provides excellent stopping power for home intruders while also keeping over penetration to a minimum (the last thing you want is a bullet that’s going to pass through walls and cause collateral damage, and possibly with tragic consequences).

In short, an AR-15 is going to fulfill multiple purposes to you during a disaster or SHTF situation.  You can use it for long distance shooting, for close range home defense, and for hunting moderately sized game such as deer or pronghorn (you’ll need a .308 or similarly sized round for bigger game such as elk).

In fact, if you think about it, the only real practical purpose for owning a gun in an SHTF situation that an AR-15 doesn’t fulfill (at least not easily or conveniently) is concealed carry.

Those are the top five reasons to own an AR-15.  They’re the reasons why millions of Americans have been drawn to the weapon and purchased one for themselves, and they’re the primary benefits that the AR-15 can offer you as well.