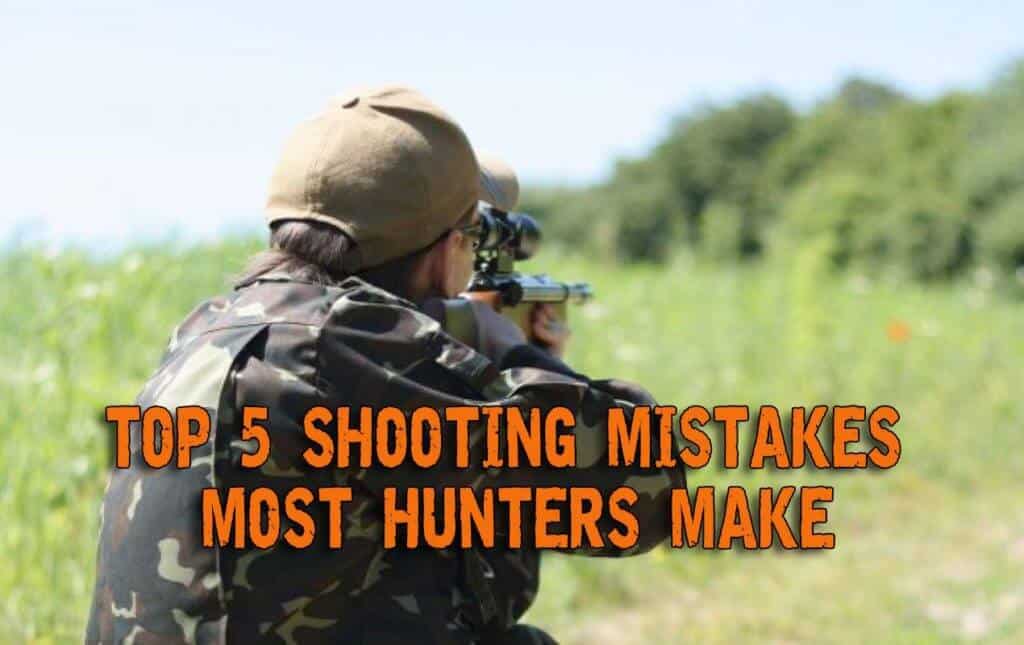 You might be good at shooting targets, but that’s not the same as shooting game. When the time comes and the game is in your sight, you will tend to fall apart, both physically and mentally. Most shooting instructors will tell you that the following five shooting mistakes are the most common for hunters.

According to the U.S. Fish and Wildlife Service, approximately 38 million Americans hunt or fish every year, and if you are reading this, then you are probably one of those people. Hunting is a sport that people have done throughout time, and that tradition continues today with families of all shapes, sizes, backgrounds, and ages.

I can’t say that I’m an expert hunter and to be honest, I think that I still have a lot to learn. Although I’ve been part of several experienced hunting parties, I even consider myself a beginner and I prefer to have a humble approach when it comes to this topic. I’ve also made some of the following shooting mistakes, but in time, I’ve learned how to fix them.

If you will have to rely on hunting when SHTF, there are a few things you need to master before you go out, hoping to bring down some big game animals.

Five shooting mistakes you should fix

This is the main reason why even experienced can miss a big target such as deer. You usually realize you flinched before the bullet lands behind your target. When I flinch, before I take the next shot, I try to calm down and focus all my attention on a smooth, clean trigger squeeze. Flinching takes many forms and t can be as simple as a too-quick jerk of the trigger. Some hunters even lift the head of the stock and jerk their shoulders in anticipation of the recoil.

The best method to fix this is by dry-firing. This requires making a careful shot with no live round in the chamber. It will help you not to jerk or flinch since you are confident there will be no recoil. By testing this drill, again and again, you will help create muscle memory. Test your steadiness by looking carefully at your sight and if it remains on your aiming point when the firing pin falls, you’re doing a good job.

Try with live ammo at the range and use the following trick. Let a hunting buddy hand you a rifle that may or may not be loaded. If you think it’s loaded and flinch, your partner will see it as well, and it’s just a matter of mind control after that.

In anticipation of a clean shot, the hunter usually tries to move his body and rifle, following the target. Since you cannot precisely predict the movement of the prey, you just need to calculate your moves. If you have a deer in sight and it moves between trees, rather than staying in an awkward position with your entire body tense, try to find a more comfortable position. By the time the deer steps in the clear, you should have the time to find the proper position.

Finding the perfect shooting position is an important skill that takes time to be mastered. It usually means knowing which position is steadiest for any possible situation. Some trainers advise using a standing, off-hand shot as you will not fail to hit the target. This is why most hunters start by training in all the standard positions: sitting, prone, standing and kneeling. The following step is to train with your shooting support of choice. Once you find the perfect position, to avoid any future shooting mistakes, you should also teach yourself situational awareness. This plays an important role to stay at the top of your game since the terrain and vegetation will influence your shooting position.

This can be described as flicking your trigger finger forward the moment the shot breaks. Such action might disrupt the rifle before the bullet exits. However, it will most likely lead to slapping the trigger and throwing off the shot. What you need to is following through by maintaining your squeeze and holding the trigger fully back after the bullet flies.

Just like for other shooting mistakes, once again, dry-firing is the answer. To stop your trigger flicking, concentrate on pulling the trigger back and holding it back after the firing pin falls. Pin the trigger back and imagine the trajectory of your bullet all the way to the target.

This is one of those shooting mistakes we make without even realizing it. Some people use the tip of their finger to press the trigger, throwing the shot right. For some right-handed hunters, they have the opposite problem. They put the trigger shoe deep in the crease of the first finger joint. This will usually nudge the point of impact slightly left.

This can be fixed rather easy and you need to use the center of the pad on the last joint of your trigger finger. This helps you move the trigger straight to the rear. Center pad, center trigger and come straight back.

This is one of the shooting mistakes familiar to me and I still do it. I settle the crosshair on the target and as I begin pressing the trigger, the target moves. Not wanting to miss the opportunity of a kill shot, I’m slapping the trigger. This usually causes me to miss, or hit the target in an area which ruins the meat.

To get rid of this shooting error, you need to combine mind control with dry-firing. Do this as many times as you can, again and again. You need to have perfect trigger control, but also the mind spirit to ease off on the trigger if you sense the animal is about to move out of its position. This will help you achieve the perfect shot.

These shooting mistakes are not hard to fix, but the first step is to acknowledge you’re making them. Only by realizing what went wrong, you will be able to improve your shooting. Another advice is to take an experienced hunter with you and ask him to observe your tactics. It will be much more easy to identify the shooting mistake you are making and as long as you’re open to constructive criticism, you will be able to fix them.