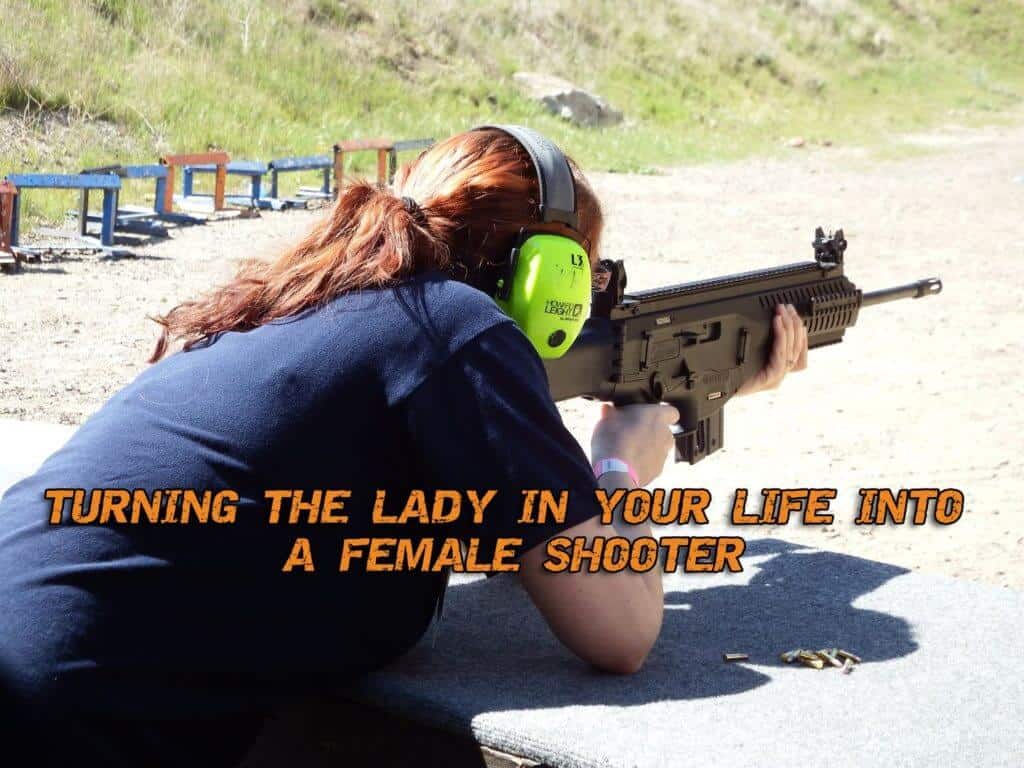 Think about survival for a moment. Survival isn’t just a man’s job, although it may seem like it since you don’t see a female shooter getting the same attention as a male one. In fact, to an ever-increasing degree in the future, “survival’ tasks are going to have to be shared by men and women alike. But we really don’t have to look to future disaster or civil disorder to practice the type of survival I’m referring to.

I’m talking about the potential everyday hazards a woman faces trouble knocks anytime at the door. But how often is the woman prepared to meet these potential challenges? And more importantly, how can a woman make ready for life-threatening situations in which she might find herself?

Contents hide
1 Women and firearms
2 Training your lady to become a female shooter
3 The need for patience with a female shooter
4 Safety rules
5 Target practicing
5.1 Related article: Point Firing In A Close-Quarters Battle To Save Your Life
5.2 Remember:
6 Self-defense shooting
6.1 A few examples:
7 Summary
7.1 Other Useful Resources:

In this article, I hope to give you some raw material to answer those basic questions. And like any raw material, it needs you to fashion it into a finished and useful product. The product I want to help you produce is a woman who is knowledgeable in the safety and basic use of firearms—particularly handguns, those weapons that may be the easiest to acquire and use in an emergency encounter where survival is one of the prime concerns.

Men have traditionally held to the view, “If I can shoot it… you can shoot it,” when attempting to instruct women on the proper handling of firearms. Nice theory, but it just doesn’t hold true in most cases.

Women have special needs in many areas, and shooting handguns should be no exception. The generally lighter frame of a woman is a prime example. Another difference is most women are unaccustomed to handling any firearms at all and regard handguns as foreign objects at best. Finally, there’s the point of basic interest. Self-defense hand gunning may not be the number one priority on your favorite girl’s list of weekend activities, but with a little patience, a lot of rounds and some week-end time, this could change.

Keeping these points in mind, let’s discuss how to get the most out of these needs while setting up a basic hand gunning instruction course for women.

Training your lady to become a female shooter

First, establish what your basic objectives are by asking yourself what it is you want to accomplish. First and foremost in the end-result category should be confidence. You want to help the female shooter develop confidence in herself and in her ability to use a handgun effectively should the need arise.

You start building this confidence from day one by exposing her to the right gun for her, not too heavy and definitely not too much recoil when fired. Too much recoil the first time out can spell the end of interest for the novice shooter or failing that, at least produce a seriously “gun shy” frame of mind that could take a very long time to overcome. Start small and work up. The big guns will always be there if she desires to give them a try.

The need for patience with a female shooter

Patience is another concern that has to be considered whenever the woman you’re instructing is unfamiliar with handguns. This is a point often overlooked by men who grew up with guns and believed a woman should be able to handle the same type of gun almost as well. Patience with a female shooter is time. Take the time to understand what her needs might be and take the time to instruct her in the various dos and don’ts.

Above all, give her time to learn. Unless she’s a natural Annie Oakley, she will take time to acquire the degree of skill needed to use a handgun effectively in a defensive situation. You didn’t learn to take the blackout of the bulls-eye overnight, you know. A woman’s unfamiliarity with handguns can work to your advantage. If a woman has never shot before she can’t have any bad habits to break. This is a very big plus to you as the self-appointed instructor.

One of the best ways to actually begin teaching a female shooter well is to familiarize her with the various safeties and characteristics of the unloaded gun that she will use. Again start simple, preferably with a revolver of decent quality and medium to small caliber. Let her hold the gun and be ready to answer any questions she may have.

The next item is very important. Explain the sights and how to align them on the target, stressing the whole time that the front sight should be the only point in sharp focus. If this is properly explained understood and adhered to, it shouldn’t be long before she is capable of making some very accurate shots, which will go a long way toward building her confidence early on.

Next, demonstrate a couple of the more popular two-handed grips along with a comfortable shooting stance. Let her practice these with the unloaded piece until she becomes accustomed to the grip of her choice and her favorite stance.

Remember what is perfect for you may not be for her. She has to be comfortable with the grip and stance.

Then set up some appropriate targets at fairly close range, somewhere between 7 and 15 yards (about the average range for the usual shooting training). With this done, you are now ready to demonstrate with live ammo what you’ve been showing her. Load up and pop off a few disciplined rounds at your target, talking to her between the shots to further explain some of the finer points, such as trigger control, breathing one or two eyed sighting, and double or single action. Single action should be all that is used at this time because of its inherently more accurate characteristics.

And when she’s ready, show her how to load and unload. Let her do it and stress sighting and trigger control as she takes up a stance on the firing line and squeezes off her first rounds. (Don’t forget eye and ear protection!)

Related article: Point Firing In A Close-Quarters Battle To Save Your Life

Encourage her, and make her take her time. Point out between shots the mistakes you see and ask her how she could correct them. Don’t be too critical and retain a relaxed approach throughout the session. After she has fired a few rounds and is familiar with the way the weapon handles during firing, walk her through the same procedures only this time “dry firing” without ammo. Any trigger jerks or other tendencies will probably show up at this time. Discuss them and correct them.

Let her live fire as much as she wants, keeping in mind there may be some tiredness in shoulder and arm muscles. A good short session the first time is preferable to a tiring all-day extravaganza.

This and future shooting exercises should be based on three axioms of good shooting instruction. They are: build confidence in the shooter, discourage bad practices while reinforcing the correct ones, and finally develop an interest in shooting by encouragement and steady improvement through practice.

With these in effect, a female shooter who has had little or no previous hand gunning experience should be capable of basic self-defense shooting should the need arise.

At the beginning of every shooting session, self-defense principles should be covered. These include thinking under stress, safety even in the emergency, and employing cover and concealment to minimize yourself as a target while firing. Thinking under stress includes being familiar enough with the weapon at hand to know if it’s loaded and being able to load it quickly if it’s not. She must know how to disengage and engage the safeties.

If the weapon is an automatic, she must know whether it’s chambered and how to do so if it’s not. These all sound like trivial considerations but in an emergency situation where the mind is racing at top speed, already occupied with a score of different whys, bows, etc., the last thing a threatened woman wants to worry about is whether the weapon she has to defend herself with is going to work if she pulls the trigger.

Safety in the emergency goes alongside clear thinking and must be employed if the female shooter is to come out of the encounter alive.

Don’t be trigger happy and shoot up the whole place.

Discipline and discretion are the best rules here. Never shoot unless there is no other alternative, and if you do shoot, don’t fire more rounds than you have to, doing your best to make each one count.

Remember to replace the safety after the threat has subsided, whatever the outcome. This last point is another seemingly small consideration but could result in serious wounding or death to the unsuspecting and already uptight survivor.

Use available cover and concealment whenever possible: Keeping to the home defense scenario, a chair, couch, or bed all provide a decent barrier to tire around. Try to fire around corners of a wall, keeping low and presenting the smallest target to the adversary.

As I said at the beginning, I hoped to give you the raw materials and some basic ideas to work from to produce a competent female shooter who could defend herself if she had to. Many of these points can be expanded and customized to your particular pupil, but the end result should be the same. Your finished product should be a survivor.