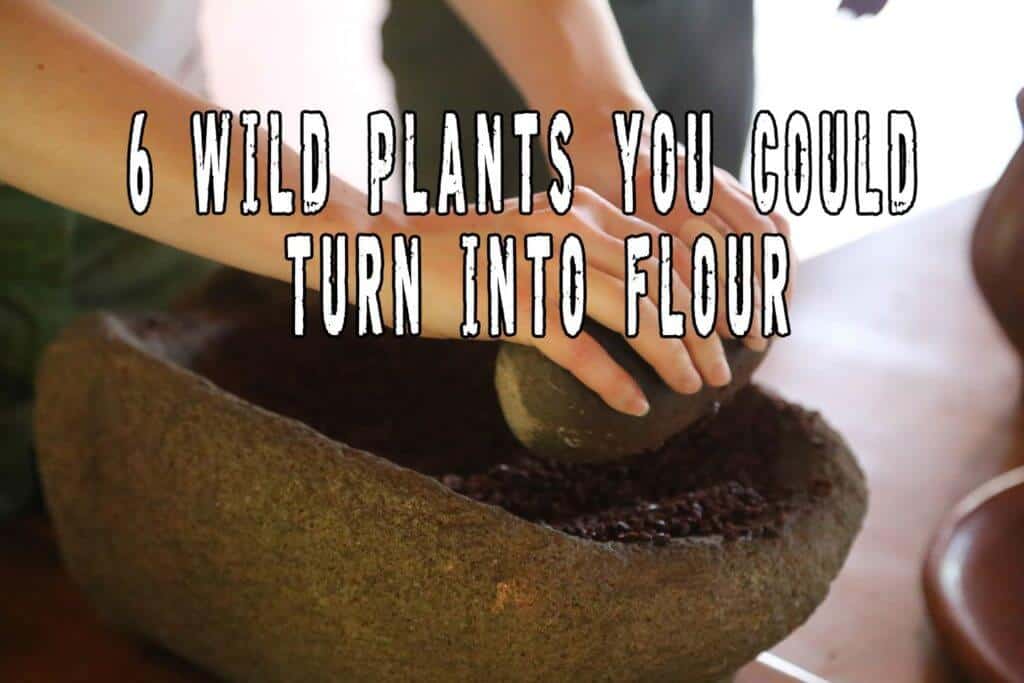 Our ancestors used wild plant-based flours on a daily basis and it was a reliable food source back then.  They were turning wild plants into flour and use it in recipes, eaten alone or added to other grain-based meals. The following 6 wild plants are being used even today to make flour, but few people keep this knowledge alive.

Making your own flour from seeds and roots is quite challenging and it requires the proper tools and knowledge. If it wasn’t for preppers and survivalists most of this knowledge would have been lost years ago.

As a first tip, one should know that making a good amount of flour requires a lot of raw material. Since you won’t always be able to find a good quantity of any one plant, nut or root, the secret is to combine your resources.

Many of the Native American tribes used to make multi-grain bread to benefit from its high nutrient profile. In combination with pemmican, they were able to eat a meal that we today might consider a superfood.

The technique for making flour depends on the raw materials you are using. While for grass and amaranth separating the seeds from the kernels will work just fine, the situation complicates when it comes to acorns and cattails.

To make flour from wild plants you would need a mortar and pestle on the field. These are the recommended tools to have since they will work even when electricity is absent. I’ve seen flour made from amaranth in primitive conditions with nothing more than river rocks. You need to pulverize the raw material into a fine dust to obtain the flour our ancestor used.

6 Wild Plants To Turn into Flour:

This is considered a weed in North America and few people know it’s actually an edible plant. It is an indigenous plant that was used by both the Native Americans and the first pioneers to make flour. Amaranth is annual plant with seed stalks ranging in size from 4 to 10 inches in length that are packed with seeds. See the distribution map here.

Amaranth grains are rich in amino acids and high in proteins. The Aztecs used it as a staple food and recent studies show that four ounces of amaranth grains provide 100% of an adult’s daily protein need. To make Amaranth flour one needs to harvest the seeds in the fall and let them dry out for a day or two in a sunny spot. You can grind the seeds using a mortar and pestle or a food processor.

Rye grass is considered tall grass and can grow up to 4 feet high. Compared to other grasses, the rye grass seeds are narrow and long. The grass should be harvested in the fall when the grasses turn brown, which means they have matured. Check out the distribution map here.

When it comes to making rye grass flour you have two options. You could use annual rye grass or perennial rye grasses. From experience, I can tell you that annual rye grass provides better raw materials since the seeds are larger. The seed heads must be separated from the grass and you can use a stick to beaten the seeds heads over a bucket or basket. Once you separate the seeds, crush them by hand and use the wind to separate the rye seeds from the chaff.

This is another staple food of the first pioneers and it can be used like Amaranth. It is originally known as goosefoot due to the shape of the leaves and the seeds it produces are called quinoa. It is a large plant that can grow to six feet or more. The seeds should be harvested in the fall. Check out the distribution map here.

To make flour from quinoa the seeds require soaking as they are high in saponins. Soak the seeds overnight and rinse well to remove saponins on surface. I recommend doing the soaking in two changes the water to make sure you reduce the saponins. The seeds can be used similar to rice and they are known to require twice as much water as grains when cooking.

Also known as barnyard grass, this plant was used as a staple grain. The plant can grow up to 60 inches in height and has long, flat leaves which are often purplish at the base. It is considered one of the world’s worst weeds since it affects crop yields by reducing soil nitrogen. Check out the distribution map here. This plant was treasured as food by the Paiute, Cocopa and Tubatulabla tribes and it was often stored for winter use. The seeds can be roasted, boiled or ground into flour. Some survivalists use the seeds to make a caffeine-less coffee substitute.

The Native Americans used to pound the seeds and ground them to make a meal and mush out of them. It was the preferred side dish for fish meals. Harvest the seeds in fall. You can also pop the seeds like popcorn in a dutch oven.

This is the preferred plants of many survivalists and for good reason. It can be identified easily in wetland habitats and it has many survival uses. Cattails are aquatic or semi-aquatic plants. Check out the distribution map here.

Cattail provides good starchy flour and the process of extracting the flour is not as complicated as many would want you to believe. To make cattail flour you need to pull the entire plant with the root. Ditch the stalks and keep the roots. Wash the roots and peel them thoroughly. Place the roots into a bucket of water and start to break them.

To extract the flour you need to separate it from the fibers. As you break the roots the flour will settle at the bottom of the bucket. Pour out the excess water and strain the remaining mush. Let it dry in the sun to obtain the flour.

Acorns were used by many Native American tribes and acorn flour was one of their staple foods. Native Americans sometimes collected enough acorns to store for two years as insurance against poor acorn production years. Despite this history as survival food, acorns rarely form a large part of modern diets and are not currently cultivated on scales approaching that of many other nuts.

To make acorn flour you first have to get rid of their tannins content which gives acorns a very astringent taste. You need to process them correctly to make sure you obtain the desired flavor. Start by removing the shells and crush the acorns with a rock or an axe. Place the crushed acorns in a bowl of water to separate the meat from the shells.

After removing the tannins use your mortar and pestle to grind the meat into flour. Afterwards, you could use it as bread ingredient or store it for later use.

Making flour from wild plants is becoming a lost skill and nowadays few people know that the above listed plants can save their lives during times of famine.  These plants were used as staples for thousands of years and helped your ancestors survive. Learning about them will not only keep the legacy alive, but it could also save you from starvation one day.

3 thoughts on “6 Wild Plants You Could Turn Into Flour”