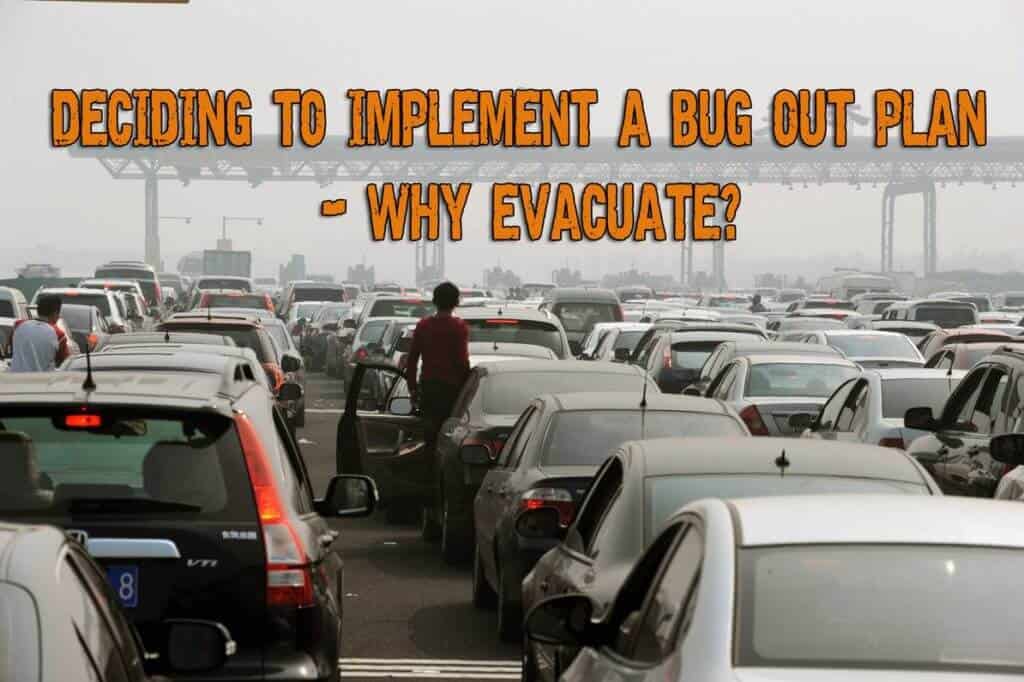 No matter how harsh the wake-up call is, some people still have a hard time accepting the immediate reality. When SHTF and people are ordered to evacuate, some will choose not to, and they will end up in the grim statistics.

The topics of bugging out or staying put are constantly being put to the challenge. It’s better to understand when it’s time to go in order to avoid making a bigger mistake.

When a natural disaster hits, leaving is a good decision since it may be the only thing that can help you survive. However, it’s important to understand that hitting the road may put you in danger. You may have to face a risk that is possibly greater than what you would face by staying behind.

Now, if you have an advanced warning that things are taking a turn for the worst, but all means take note of it and leave. If the authorities are telling you that you have to leave your home behind, there’s no point in arguing about their reasons to give such an order. Do yourself a favor and head for safer pastures until the situation calms down.

Contents hide
1 Using common sense
2 Spotting the Red Flags
2.1 Related article: Intuition in Survival – The Importance of Your Gut Instinct
3 A road without an end
3.1 Related article: Vehicle Preparedness Essentials You Need To Cover
4 Leave the stuff you don’t need behind
5 Building the plan to evacuate
5.1 Useful resources to check out:

Let’s take a hurricane warning for example. During such a scenario, you have enough time to act before the hurricane makes landfall. Even more, if the authorities are telling everyone to evacuate, that’s a pretty good motive to bug out.

Your neighbors are doing so and pretty much everyone around you, so what’s there to think about? When everyone leaves, that’s a pretty good indicator that bugging out is a smart call.

As for wildfires, we’ve recently seen what staying behind and not acting in time can lead to. A wildfire is an impending disaster that needs to be closely monitored. It involves some degree of warning and it dictates the path to follow. You need to put all the info together and establish if it’s escalating or not. While you may not have the same time frame as for hurricanes, signs may be telling you where the fire is headed and if you’re in peril or not.

These two examples are some common, natural disasters that can be easily recognized as dangerous situations. However, not all disasters are so “straightforward” if you will and some require reading the signs and figure it all out.

Preppers and survivalists know that it’s advised to get out of town ahead of the crowd when the brown stuff hits the fan. It’s safer to do so rather than ending up in a traffic jam or slowly moving on a packed highway. You should watch for signs and get into your bug out vehicle when you identify them.

A clear red flag is when emergency services are no longer responding to calls. This is not only worrisome for the common folks, but also for preppers and survivalists. No matter how well prepared you are, there can be circumstances when you may need outside aid. As a quick example, medical emergencies are situations that can be handled by a few people.

If you call 911 and nobody is picking up on the other side of the line, it’s time to move. You should be headed to a location in which the calls you made are being answered.

Seeing that food trucks aren’t making deliveries to your area is also another red flag. This means that the supply chain is broken or there aren’t any resources to go around. Either way, the store shelves are going to get emptied in a hurry. Panic buying is something we all see before a storm warning. Imagine what will happen if people believe the grocery stores will be empty for weeks to come.

Related article: Intuition in Survival – The Importance of Your Gut Instinct

The situation will lead to looting, riots and other unpleasant experiences. When people are desperate, they end up making bad decisions. If the word gets out that you’re a “prepper” and you are bugging in, they will come knocking and they will not ask politely for “some food”.

Most preppers say that they have enough firepower to defend what’s theirs and that may be true. However, human nature is so dark that people will rather burn your house down with you in it, if they don’t succeed breaking in.

Besides the exterior red flags that can persuade you to evacuate, there is a simple one, right next to you. Not having enough supplies is one of the most basic reasons to evacuate. You might have everything mapped out, but if you had a rough year (unemployment, crippling debt, etc.). You were forced to dig into your supplies long before the disaster hits.

Or maybe, the disaster was far more severe than you anticipated and you didn’t manage to ration your supplies properly. Whatever the reasons, you may not have enough food, water or other resources to make it through.

When the harsh reality hits, well… that’s the time when you need to relocate.

A road without an end

If you evacuate without a destination in mind, you will become a domestic refugee and you will end up wandering around. A well-equipped refugee that sooner or later will become a target. Plan ahead for where you can go If disaster hits. You can go to a cheap motel, or you can go to a national park that can become your temporary home.

When you plan to bug out, it’s always a good idea to have a few different options in mind. Having a few bug-out locations to choose from will become your salvation. When picking your destination, you should consider both directions of travel and distance.

Since most disasters are local, you will need to do a good amount of traveling to be outside the danger zone. Most people will go to the next town while others plan to go even further. To be on the safe side, I advise you to plan for locations that are 50 to 100 miles and even further.

When picking up destination for your bugging out plan, you should carefully calculate the distances based on your vehicle’s fuel efficiency. You should know how far your fully loaded car can take you with a tank of gas. The average car can cover 150 to 200 miles with half a tank of gas.

Why only half a tank? Well, the chances of a disaster striking when you just filled up your gas tank are pretty unrealistic. Once again, to be on the safe side, you could be storing some gas at home to make sure you are ready to go and not waste time refueling on the way out.

While using the family’s car to escape a disaster is the preferred and perhaps the only option for some, things may not go as planned. Think about what you will do if you are forced to travel on foot. Some can do it, while for others is nothing more than a death sentence.

Leave the stuff you don’t need behind

If you are forced to evacuate, it’s mandatory to bring only the essentials. In 2016, during the Fort McMurray wildfire some friends that had to evacuate told me what they went through. The thing that surprised me the most is what people took with them when they left in a hurry.

Their neighbors took some paintings, two watermelons (yes you read that right!) a few blankets and their cat. That was all, no papers, no jewelry, nothing that made sense or had a real value.

When you are forced to evacuate, you shouldn’t just take what you can get your hands on. Planning is necessary since you will be forced to make some tough decisions. You may not take your paintings with you or china your grandmother left you. You should make your peace with the tough of leaving some things behind, now when there’s no rush and no stress.

It is important to bring only the basics that will keep you and your family alive. Once you have the list with those items, consider about adding the valuables (only what can be carried) and the things you need for the rebuilding process.

All important documents, take pictures of each room to identify what you owned if your home is destroyed. All the sentimental stuff that would be heartbreaking to lose should be protected or taken with you if there’s room.

Building the plan to evacuate

Nobody wants to evacuate and most people can’t comprehend such scenario. Some live in denial while others still believe that there’s someone out there looking out for them. If you want to survive when it hits the fan, it is important to sit down with your family and build a bug out plan. Decide together in a meaningful way how will you make the call to evacuate when you spot the red flags.

Figure out the bug out locations you can go for and establish how you will get there. Always have the bug out bag ready and make sure the extra stuff you need to take with you is in reach or you can easily find. I advise you to make a “take with me” list to quickly check it when you are forced to evacuate. You will make sure you aren’t missing anything and you won’t panic over forgotten stuff.

You shouldn’t leave it all to chance when the option of bugging out is an alternative for your family. Knowing in advance how you will handle such a situation will help you control anxiety and fear when the time comes to hit the road.