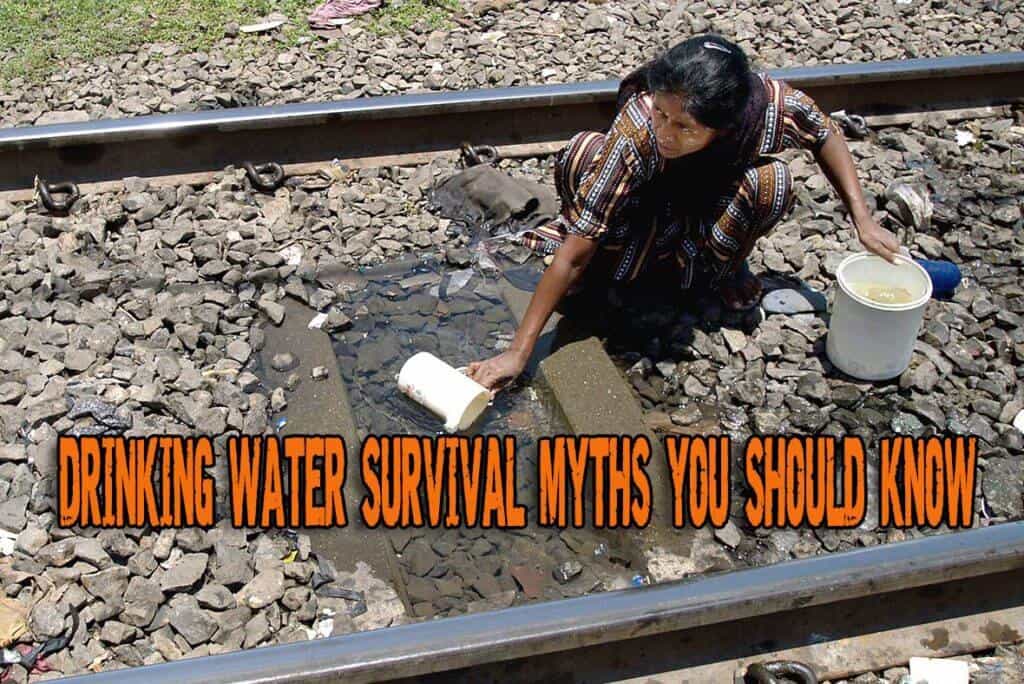 Water is one of the most crucial items you will need in any survival scenario. In fact, it’s the first thing that everyone runs out of. Drinking water in the wilderness becomes quite a challenge because people keep following blindly a few dangerous myths that have no scientific basis.

During our normal, day to day lives, the average person can’t store enough water for an extended period of time for just himself, let alone the entire family. Water is bulky and heavy, and you need to have a lot of storage space to store a large quantity. Things change dramatically if you find yourself stranded in the wilderness since you usually don’t carry more than a water bottle or two. Since drinking water becomes a necessity to stay alive, you will take advantage of every opportunity you have.

You may be lucky to find a pool of water in the woods or any other water source. However, do you think it’s safe to dive head first and not think about the consequences?

The media keeps promoting the same survival shows over and over again, creating a false sense of knowledge. I’ve seen the following survival myths being broadcasted everywhere and I think it’s time to unlearn some of these drinking water myths.

You should learn to distinguish fact from fiction if you want to survive a worst-case scenario and you should always test the information you receive. Read on to stay informed and make sure to pass this knowledge forward. This is another one of those survival myths that have been transmitted on by former generations. We somehow think that if water flows, it can clean itself and it is safe to drink. This wasn’t right decades ago when pollution wasn’t such a big problem as it is today and it was mainly a gambling game. Just like back then, chances are you won’t be lucky enough to find a clean water source. After walking for hours during a hot day, the sound of a quick-flowing stream will tempt you to quench your thirst.

However, you should resist the temptation if you don’t want to get sick. Bacteria, viruses and other harmful parasites can hide even in the most crystal clear waters. All these waterborne pathogens are waiting patiently to enter your body, and even though you are not thirsty anymore, you have given them a chance to create life-threatening problems.

If you drink unpurified water, you could end up with diarrhea, vomiting, and nausea. These are all symptoms that you need to avoid during a survival situation because they can lead to a full-body shutdown. You should purify all the water you need to use, including the water you will use for washing your face. To ward off this worry, you should carry a water filter with you or at least consider options such as water purification tablets or iodine pills.

This is another rumor with no basis, and I’ve seen it around many times. Safety is your priority in a survival scenario, especially if you have no idea when help will arrive. All water should be treated before consumption. The most common method for killing all microorganisms is boiling the water.

Metal canteens can, of course, be placed directly into an open fire while cooking. However, the situation changes when you have a plastic canteen. If your canteen is made of plastic or any other material that is not fireproof, you will have to use an indirect heat cooking method like rock boiling.

This is a technique that has been used by many survivalists to boil and purify water. It’s actually pretty simple to master it. All you need is to heat rocks that will fit into your container and still allow room for water or food. After heating the rocks over your fire for an hour or two, you can put them into your container to boil the water. You will need to change the rocks frequently to help maintain an even boil. Quick tip: don’t heat rocks that have water trapped in them as these can explode.

The most common myth portrayed by the western movie is the one about drinking water from a cactus. The reality is that if you’re not an expert in cacti botany, you are taking a huge risk. In fact, the liquid inside a cactus is not actually water as you may think. It’s a highly alkaline, noxious fluid. If you drink from a cactus, chances are you will get sick and start vomiting. That’s the last thing you need since vomiting will make you dehydrated faster.

If you want to test your luck and drink water from various plants, you should learn about foraging and discover which plants are safe for consumption in your area. Rather than taking unnecessary risks, save your energy and look for other water sources.

You should never drink salt water, no matter how thirsty you are. Few people are aware that drinking any amount of saltwater will lead to further dehydration and death. In fact, you will die faster than going without water at all.

When humans drink seawater, their cells are thus taking in water and salt. While humans can safely ingest small amounts of salt, the salt content in seawater is much higher than what can be processed by the human body. Additionally, when we consume salt as part of our daily diets, we also drink liquids, which help to dilute the salt and keep it at a healthy level. Living cells do depend on sodium chloride (salt) to maintain the body’s chemical balances and reactions; however, too much sodium can be deadly.

Human kidneys can only make urine that is less salty than salt water. Therefore, to get rid of all the excess salt taken in by drinking seawater, you have to urinate more water than you drank. Eventually, you die of dehydration even as you become thirstier. You are better off if you use saltwater for cooling your body. Try drinking water from other sources and improvise a solar still or use the perspiration bag method.

Snow can help you rehydrate safely, but only if you boil it in a container. You should avoid eating snow because it can lead to further dehydration and even hypothermia. As it falls through the sky, snow, with its intricate latticework, forms a sort of net for catching pollutants that may be in the atmosphere. The most common is black carbon, or soot, released by coal-fired plants and wood-burning stoves.

Your body will have to consume a lot of energy to heat and melt the snow. You will need to eat about ten quarts of snow to yield one quart of water in your belly. This is because any volume of snow is mostly air. Find ways to liquefy it by making a fire or placing it in a black container to absorb solar heat.

First of all, there is a certain survival show that kept promoting this drinking water myth and I don’t see its point. First of all, urine contains a lot of the body’s waste products. And second, the urine of a dehydrated person is even more laden with stuff you shouldn’t reintroduce in your body.

This is how you can turn urine into drinking water:

What you need to do first is to dig a hole in the ground where the soil is exposed to sunlight. Put a plastic sheet inside the hole and place a clean container in the center of the hole. The urine has to be deposited in the excavated area around the container. Digging a hole requires some energy, but the best part is that once you’ve excavated it, you can use it as many times as needed.

At sundown, you will need to cover the hole with a plastic sheet or a tarp. Whatever you use, make sure you secure it with large rocks on each corner. The sheet shouldn’t touch the sides of the hole and stay suspended over it.

The next step is to make a dip in the center of the cover directly above the container. Use a small rock for weighing it down. The reason you need to do this is that the dip will serve as a condensation and distillation point. During the day, the heat will distill urine from the ground and water vapors will be collected on the underside of the plastic sheet.

If you’ve done everything according to the instructions, condensing water will drip from the plastic cover into the container. The minerals and impurities from the urine are too heavy to evaporate, so you don’t have to worry about it. Only the water content, which is distilled by the sun’s heat, evaporates and gets trapped by the plastic sheet. As a result of the entire operation, you get potable drinking water and you’ve learned how to make water from urine.

You may be right if you can find a water source, but even so your Lifestraw water filter won’t be enough to keep you hydrated. This of course, unless you camp there and stay near the water source at all times. If you are forced to travel long distances, you need to have alternatives since there’s no guarantee you will find a water source again. I suggest bringing a small water filter and also a container, so you are able to carry water anywhere you go. The good thing is that there are now all sorts of water canteens that can also purify water. The most common ones are the WaterGo bottle and the Puralytics bag.

Always think about your next steps and make sure you have everything you need to survive. If you keep coming back to the water source, you won’t make any progress in finding your way out of the woods. Even more, you will soon run out of energy and you will be forced to acquire food to keep your strength.

Knowledge to survive any medical crisis

Learn How Our Ancestors Managed To Survive Without Technology

8 thoughts on “Drinking Water Survival Myths You Should Know”