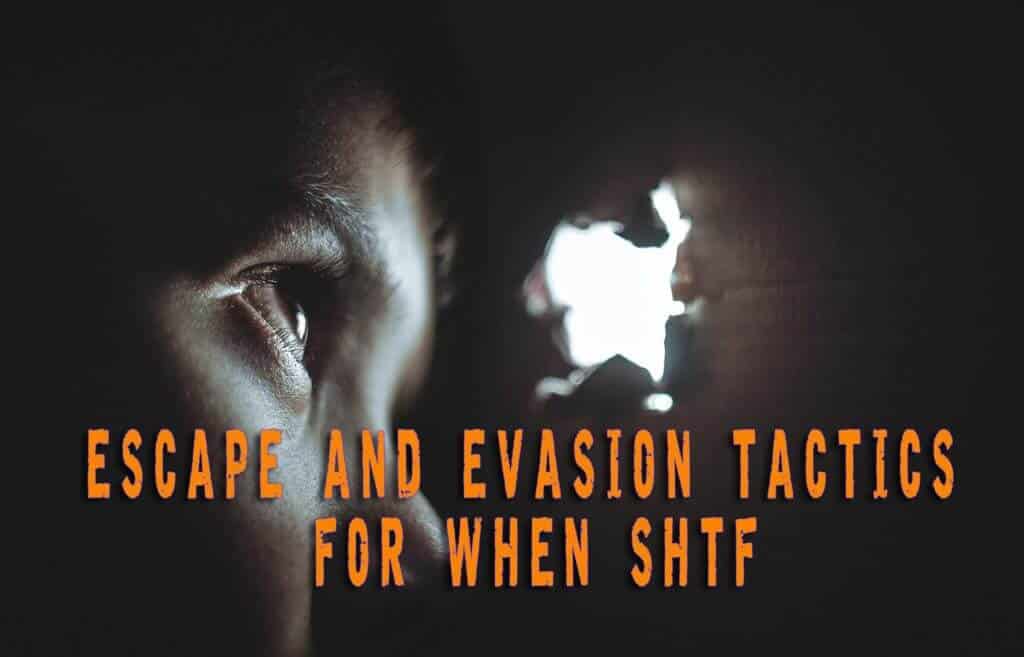 If (and when) things go south, you find yourself in a total doomsday situation (or perhaps some politician pisses off the wrong country, and everything turns to Red Dawn: Real Life Edition), understanding specific and efficient escape and evasion tactics can be highly critical.

Often, it can feel as though we each create our own personal prisons in our day to day lives; this is not, however the case in times of crisis, or rather when SHTF. No, then the only “prisons” will be governed by an evil that we likely cannot imagine.

For the “non-believers”, those who turn their noses up to the philosophy of “prepping”, their arguments may lay claim to something along the lines of “well, I just don’t see that happening to me. Captured?! It’s a bit far out of an idea…”

Let us all be honest with ourselves, if not but momentarily; a forced-into-captivity-type ordeal could happen to you, or anyone you know, in a skinny minute. In the event of a seemingly simple, quickly executed kidnapping, wouldn’t you rather at least be half prepared with the knowledge to escape than to go into the situation entirely blinded?

Some “preliminary” skill sets are highly important to know and understand before ever becoming subject to any sort of capture or abduction. These are base level skill plans (though don’t allow that to take away from their natural gravity). These skill sets could mean the difference between life or death:

There is an archaic law that we should all be familiar with, the Seven P’s. Proper prior planning prevents piss-poor performance. This rings true for nearly all planners and preppers and should be reflected through their everyday practice and study. Proper plans, when they are formulated ahead of time, are virtually guaranteed to help preppers and survivalists alike to not only better execute projects, reach their goals, and fulfill their visions of endurance, but (in the case of escape and evasion, save their lives.

The ability and the action of being able to adapt to the situation given also holds great magnitude. It is certainly better, in a survival-type situation, to be a “jack of all trades” rather than a master of only one or two, as this imparts with you an assured amount of adaptability. Being able to adapt (extemporize with changing conditions) is a vital survival skill and may possibly save your life on more than one occasion.

The aptitude to establish your location, where you plan on ending up, along with the ability to proceed from point A to point B is, too, of grave importance. This goes for nearly all scenarios (be it fallout, escape/evasion, or a simple trek through your favorite backwoods country). GPS and Google Maps may not always “come through”. Ineffective navigational skills will cause nothing more than stumbling, confused, lost sense of being.

This can cause a number of things to go awry. Inside of navigational skills, understanding map-reading and compass use are unparalleled by any other attainments. It does not take very long at all to acquire these skills. Some simple study and practice can hone these skills in nicely. Eventually, you should have yourself proficiently reading topographical maps as if they were children’s books.

***(This is NOT to say that one can simply go out to Barnes and Noble, purchase three or four books on map-reading, and become a certified expert…No, but with much literal field practice, one may find himself just competent enough to understand what they are attempting to do…).

Understanding these skill sets early on in your prepping stages can save you a ton of heartache when sfhtf (or before, if you intend on becoming anything outdoorsman-like for the plain sake of knowledge).

Whether you have been kidnapped, taken hostage, or have become a prisoner of war, there are many things you need to know for a successful escape. Comprehension in lock-picking, understanding how to adequately get over fences, knowing how to break through walls and dig tunnels can prove to be much-needed knowledge in captured scenarios.

Considering lock-pick methods, I’ll not go into any tutorials here (there are a throng of sources for that, thanks to the big, fat web), as there is a certain level of immaturity in the world, even though we each should be fully aware of the responsibilities that come along with this sort of know-how.

As for escaping “through” walls, the material that makes up the wall is of some importance. A brick wall, for instance (also most common), is one of the easiest to break through. One can use an improvised chisel to continually scrape away the mortar around a single brick, and moving out from there. Saving the mortar scraped from the bricks and mixing it with water or urine, you can make-shift hide your handiwork from the plain sight of a guard or captor.

As long as noise isn’t a limiting factor, breaking through block walls, walls made up of single hollow blocks (concrete blocks) are relatively easy to smash through. Stone walls are typically extremely difficult to pierce. This is due to their brute thickness. The same method for busting through brick walls can be utilized here, only you must understand that the time until accomplishment is at least doubled.

Fences, though usually seen as a temporary enclosure or secondary perimeter barrier, must be thoroughly investigated. Their construction plays a major factor in the plan of escape. The type of wire that makes up the fence will control your decision on how to conquer it. Common fences faced may include:

Tunnels- Although tunneling to escape was extremely popular during past wars, this day in age, they are a bit more unorthodox. Nowadays it is best to use the tunneling method for short, easy runs (such as digging under a fence).

There are a few basic rules of thumb when it comes to evading an “enemy” once you have escaped their hold:

History allows that even up to present day, tracker dogs have been utilized for thousands upon thousands of years.

Tracker dogs are exerted to find and pursue the smell of a man’s course on foot. These dogs concentrate on what is known as “ground scent”.

Ground scent happens as the escapee, unavoidably, crushes vegetation and insects, breaking the surface of the ground with each pound of the foot. Ground scent can last up to 48 hours.

The main remedy for escaping the clutching jowls of a pursuit dog is to rapidly increase the distance between you and it (or them):

***Keep in mind that evading a pursuit dog can nearly prove to be impossible, but never give up hope in an evasion scenario.

Human trackers (or scouts) are certainly not the simple characters who play the seemingly unimportant roles in nearly every Hollywood produced western. No, in fact, they have played keen roles since the days when man first induced those skills simply to fill his need for food. As the aggressive nature of man finally turned on his fellow beings, scouting became an employment to locate enemies.

Trackers have been used with great success for centuries to locate and follow enemies, to round up wanted criminals, and to recapture escaped prisoners of war.

In understanding evasion, one must first understand the doctrines used by the trackers themselves. This is the only way to create the ability to use the proper countermeasures to avoid recapture.

A tracker relies on some specific signs that are left behind by an escapee. These signs are used to detect the presence and direction of his target.

This class of signs is made up of the unavoidable marks left on the ground. These can be seen as any disturbance of the earth and of the leaves and sticks, dead bugs or insects, or any tumult to the local wildlife. These signs are considered temporary simply because, after a short while, weather and vegetation will eradicate them.

These can be made up of cut or broken branches (shrubbery, undergrowth, etc.), dropped items or man-made things.

The following are considered “visual ranges”:

Considered as signs in vegetation growing above knee height. (It is important to consider the size of the group that the tracker is tailing; the bigger the group, the larger the top sign).

Here, the name implies all…this is the disturbance of the path itself. These signs can be of the following nature:

There are a multitude of varying factors that contribute to the tracker and his exposition. These are all well-worth looking into for further understanding of evasion tactics. These varying factors can be anything from the size of the party being tracked, the spoor (footprints) left behind on the trail, the terrain of the area, the weather, campsite remains, and even the direction or route being taken.

Unless properly executed, any efforts at evasion will be in vain and may risk the confirmation that the prey is changing direction. The delaying tactics used by an evader must be used to “buy more time” than that which is depleted.

This tactic may be performed best by walking backward, putting your weight on the heel and lifting the knee slightly in order to mimic the action of walking forward. Be wary of loose dirt or sand that may be dragged in the direction of movement.

2. Brushing the track or masking movements

In an urban environment, zig-zag movements will prove to be more effective than moving in a straight line. Always make it a habit to continuously check behind you. Utilize alleyways, shadows and the sides of buildings for cover. Rather than attempting to “sweep” the track, try padding your shoes with cloth so that you are leaving a distinctive imprint.

Flagging is when you crush the vegetation, grass or leave an obvious trace of trash in the path behind you. This will leave clues for a tracker that very well may lead to your capture. Always be aware of how your route is affecting the surrounding habitat. Attempt to look are your path through the eyes of the scout; think as they will. ***This may be the most import tactic of all!

This can help in the sudden absence of any stop signs. The best time to employ this method is when you come across the trail of a large animal. The signs you leave behind could become confused with those left by the animal.

A final bit of advice would be to employ irrational actions. These may include climbing a vertical face when it is not really necessary; or doubling back parallel to the line of your original path (this one will require a good bit of sheer speed); using a large river as a simple, effortless mode of transport (though it is not exactly wise to hijack a boat, as this may just bring some unwanted attention your way. Rather, build a makeshift raft).

In any event of escape/evasion, it is important to always bare in mind each and every factor that could potentially be in play.

Staying focused and preparing properly can make the difference in your freedom or apprehension. Remember, always be physically and mentally prepared for the worst.

Also, keep in mind, your knowledge in bare necessity survival is the next step in the evasion process. You have to LIVE! All the escape/evasion tactics in the world will prove to be complete rubbish if you don’t know to survive!