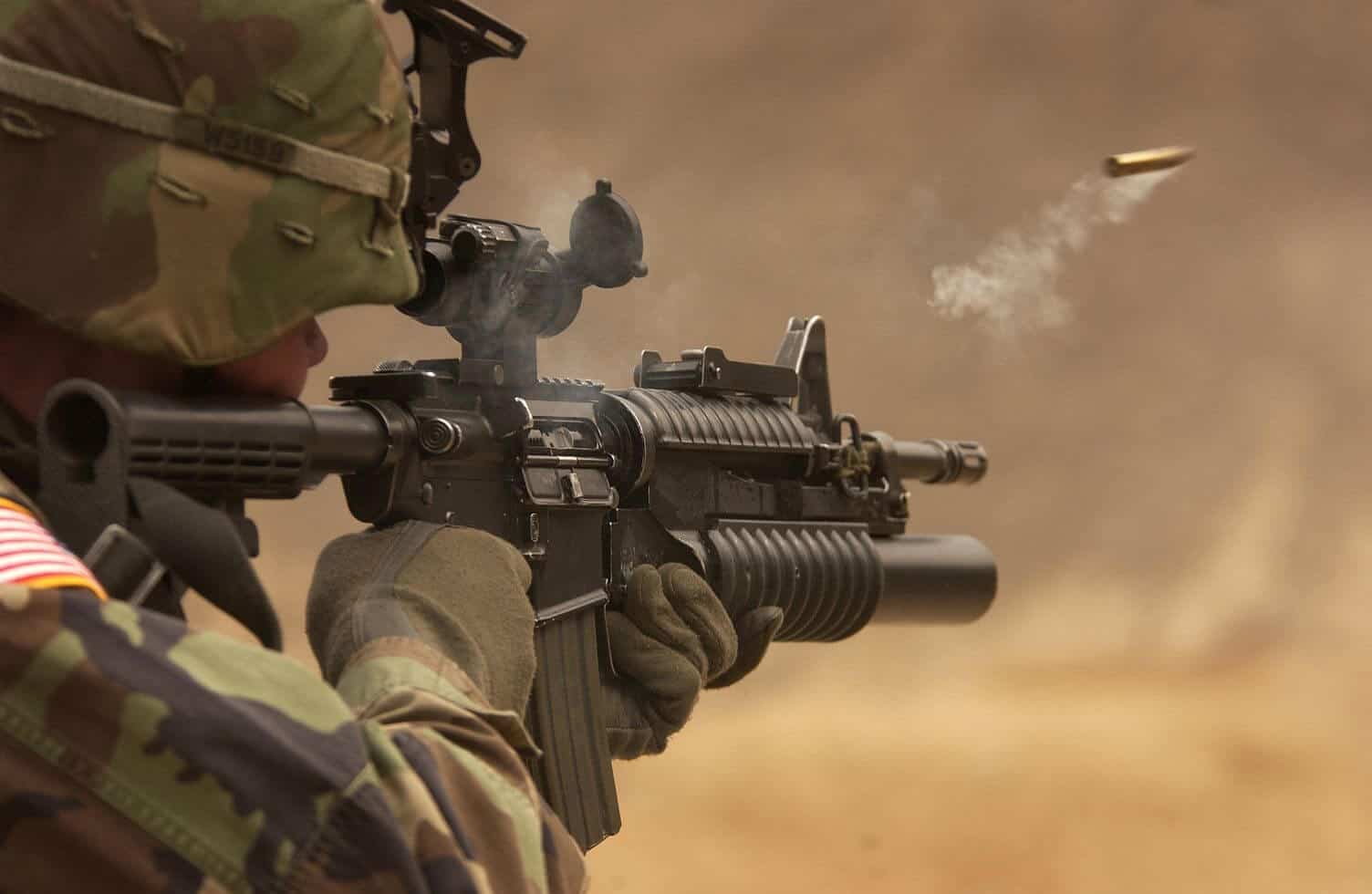 Everybody knows what full-automatic fire is, but how many of us know what it’s like? Military veterans will remember the experience they had during Basic Training, where they may have had a brief orientation and fired off several short bursts on full-auto.

The reason the military conducts these full-auto orientations is to demonstrate that full-auto fire is uncontrollable and to discourage soldiers from using it. These orientations are usually accompanied by the admonition to leave the selector on semi-auto and squeeze off individual, aimed shots. Given the tendency most trainees have to wildly spray everything in sight, this is probably good advice.

Contents hide
1 Full-auto fire is not like in the movies
1.1 Training for the recoil
1.2 Sighting
1.3 What about compensators for full-auto?
1.3.1 Concluding
1.4 Other Useful Resources:

Movie fans, on the other hand, have learned an entirely different lesson from Hollywood. They have seen lots of full-auto fire, all of it very controllable, very accurate and of course very unrealistic — but dramatic none-the-less. One of my favorite full-auto scenes is from “Miller’s Crossing,” a gangster movie set in the 1920s. In one scene, Leo (Albert Finney) shoots several very accurate sustained bursts, totaling probably 300 rounds from a Thompson with a 50-round drum.

The lesson movie fans have learned is that full auto-fire is no big deal. Just pull the trigger and spray away the enemy. Now for the reality, Automatic firearms vary tremendously in their controllability depending not only on their caliber but also on their design.

Given a little practice and lots of ammo, most people can figure out how to control a submachine gun fairly well. Assault rifles, on the other hand, are generally much more difficult for the novice to control because of their greater power recoil.

Training for the recoil

How do we train people to deal with the realities of fully automatic fire, where the weapon seems to take on a life of its own and jumps all over the place?

Traditionally this instruction has fallen into two schools: The “short burst” theory and the “go with the flow” theory.

Short burst adherents maintain that the weapon is uncontrollable in sustained bursts of full auto-fire. They point out that most rounds fired will miss the target. They suggest that by developing the trigger control ability to squeeze out 3-round bursts, you should be able to keep two or possibly all three of these rounds on the target. Prior to firing the next burst, you recover, re-aim, and tap the trigger again.

Go with the flow adherents maintain that the recoil forces acting on fully automatic weapons force the muzzle up and to the right. Therefore, according to their argument, you aim at the lower left of your target, say down around his feet, and squeeze off a burst, letting the weapon guide you in a diagonal line across the target until you are firing over his shoulder, at which point you stop firing.

There are several major errors in these two schools of thought, and they are all based on a misunderstanding of what the weapon is doing during full auto-fire, and consequently, what the shooter should do to compensate for it.

First of all: The muzzle of the weapon does not climb during firing. The recoil force is directed to the rear, and it pushes the weapon straight back. What makes the muzzle “climb” is the human anatomy, compounded by an improper firing stance.

Watch most people attempt full auto-fire. They stand straight up with their feet close together as if they were on a target range with a .22. In this position, when the weapon pushes to the rear, its force will cause the firer to bend backward at the waist. It is their back-bending at the waist that causes the muzzle to climb.

When fired “from the hip,” the rearward force on the weapon causes the elbows to bend. These body movements occur because the weapon’s recoil force has to go someplace. As this force moves through the body, it causes movement at the weakest points: The waist and the elbows.

If you want to test this theory out, try shooting your weapon (a semi-auto will do) the normal way. Then switch hands and turn it upside down. If the muzzle climb theory is correct, the weapon’s muzzle will travel downward and to the left.

The results: That the weapon’s muzzle still climbs upwards will quickly demonstrate the validity of the body-dynamics theory of weapon control: that it is the body’s “hinged” movement that causes muzzle climb.

In order to control a weapon during full-auto fire you must channel the recoil force through your body and into the ground. You do this by taking an aggressive stance, bend your front knee and point your lead foot at the target. Your rear leg should be straight and in a direct line with your back. Lock the weapon tightly into your shoulder with your firing hand. Cradle the weapon in your off-hand. It is there to provide support not to wrestle with the weapon.

During a sustained burst, you will feel the weapon start to “climb” as it pushes you back. This is because you are allowing yourself to bend. To counter this “climb,” you simply keep the butt snugly locked into your shoulder and lean forward by bending your front knee. This distributes your body weight forward and channels the recoil force down your back, through your leg, and into the ground — countering the weapon’s tendency to “climb?’

After some familiarization with this technique and some live fire practice, you will discover that you can keep all 30 rounds of a sustained burst from an AK-47 on an upper torso silhouette at 25 yards. At 100 yards you will be able to keep all your shots within a radius of three feet. For comparison, firing a sustained burst from a more conventional stance often yields a long string of shots that is 25 to 30 feet high at 100 yards.

Another advantage of this technique is that it is effective for the assault. You simply advance in a shuffling fashion without crossing your feet. This will maintain the weight forward balance you need to control the weapon while advancing.

Read next: 5 Guns Every Prepper Should Own

Another area that causes problems for most shooters is maintaining some sort of sight picture during auto-fire. The reciprocating action of the bolt makes it impossible to hold a conventional sight picture. And we don’t always have the luxury of shooting against a dirt hillside where we can watch the impact of each of our rounds. With their doctrine of massed automatic fire, the Soviets developed sights which lend themselves most easily to this type of use.

It is still possible to use this technique on Western weapons that use a rear peep sight. You simply look over the peep sight and set the target above the front sight protector ears. Once you have practiced a little, you will find just how effective you can be with full auto-fire, especially in the assault mode, where you can move forward, providing your own cover fire. 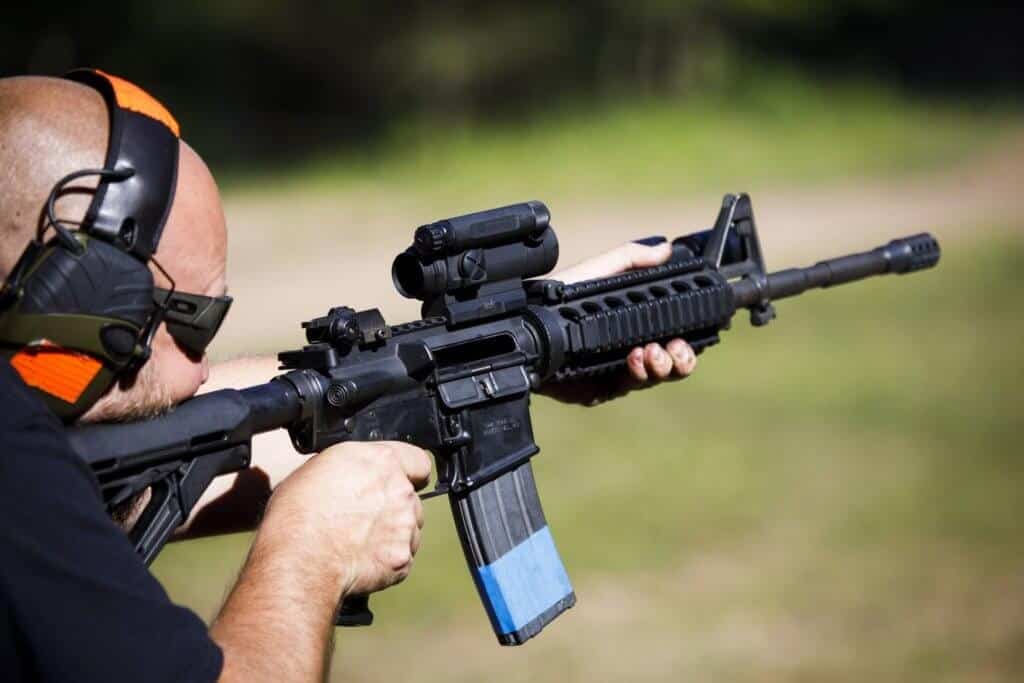 The M-16 is ideally suited for this technique because of its already low recoil impulse, attributable primarily to its diminutive round and its straight-line stock design.

This full-auto firing technique is just as effective from the low assault position as it is from the shoulder. You’ll notice that I avoid the term “hip.” You can’t control a weapon at hip level, your body geometry just won’t handle it.

In the low assault position, you tuck the stock under your armpit and clamp the pistol grip over your solar plexus. You lock the weapon into this position and aim by turning your body, not the weapon itself. Otherwise, the fundamentals are the same: You control the weapon with your front knee, bending it to bring your weight for-ward to counter the recoil forces generated by the weapon.

What about compensators for full-auto?

They are an outstanding idea if you can find one that works well. To do this, you’ll probably need to test several on your particular weapon.

Some compensators deflect the muzzle gasses to the rear, helping to neutralize the weapon’s rearward movement. Others deflect the gases upward, compensating for the body’s tendency to bend backward under the forces of recoil.

The full-auto control techniques described here are most appropriate to the military, where there is a sufficient logistical “tail” to keep the troops equipped with the massive amounts of ammunition consumed by automatic weapons.

For the individual or guerrilla, auto-fire is usually a disastrous waste of precious resource — ammunition. You adapt your tactics to your resources.

If you have an unlimited supply of ammo, you can put automatic fire to very effective use by applying these techniques. If ammo is in short supply, you are best advised to avoid getting involved in firefights. In that case, you would attack the enemy only when you could achieve your desired results with a few well-placed shots and escape utilizing stealth rather than firepower.

While specifically intended for automatic weapons, these techniques are equally valuable for semi-autos. You can dramatically lower your recovery time between shots by simply remembering these steps: Keep your feet wide apart, take an aggressive stance, bend the front knee, and lean way forward into the weapon.

Lock the butt securely into your shoulder and bend your front knee to counter “climb.” After a little practice, you will find yourself firing several well-placed shots into a target at the same time that would formerly have found you recovering from a single shot.