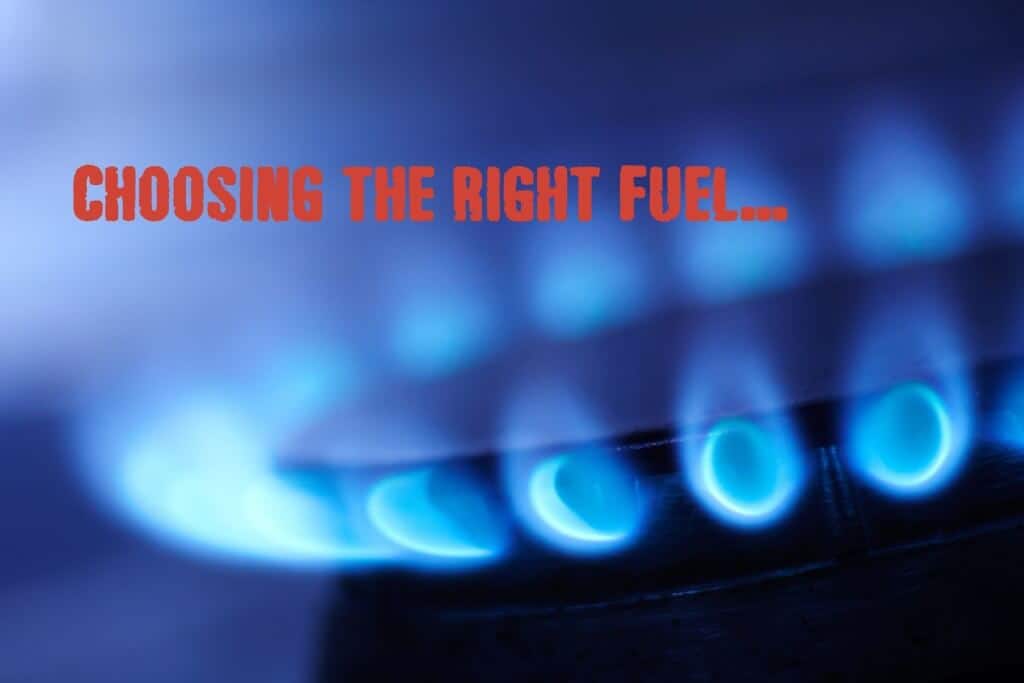 There are different types of fuel you can choose from, but making the right choice is sometimes harder than it looks. Storing the right type of fuel will make a huge difference during an emergency. It will provide you with the comfort you are used with. This article covers the characteristics of different types of fuel you could use during an emergency.

Once you know more about the various types of fuel, you can compare them and choose the ones most appropriate for your needs. You will also notice that these types of fuel have some technical data listed and while it might not be scientifically exact it is adequate for the general purpose.

The term BTU is widely used below and before we go further we must understand what it represents. BTU stands for British Thermal Unit and it represents the amount of heat needed to raise the temperature of one pound of water by one degree. It’s a term used to measure the amount of heat produced by an appliance or a fuel. The simplest formula you can remember is the following:

Besides the BTU term, we should also mention the flashpoint notion. This is the lowest temperature at which there is enough vapor from the fuel to produce a flash from it. A fuel with higher flashpoint is less flammable than a one with a lower flashpoint.

How long will my fuel last?

Contents hide
1 How long will my fuel last?
2 Fuel Types
2.1 Natural Gas
2.1.1 Related reading: Off the Grid Limitations no one tells you about
2.2 Propane
2.3 Butane
2.4 Unleaded Gasoline
2.5 Kerosene
2.6 Alcohol Fuel
2.7 Wood pellets
2.7.1 Related reading: How to harvest firewood
2.8 Anthracite coal
2.8.1 Other Preparedness and Survival solutions you may like:

This is a question that many ask and it needs an answer before acquiring a certain type of fuel. We have to divide the total BTU by the output BTU if we need to find out how long an appliance will run with a certain fuel.

With a network composed of more than one million miles of pipelines, this fuel is available everywhere. While is a versatile fuel, the problem is that if the electricity goes down, the natural gas network may go down as well. You might want to look into other alternatives for heating and cooking.

Related reading: Off the Grid Limitations no one tells you about

We have to specify that propane comes from two main sources: processing crude oil and natural gas. Propane is a fuel that is compressed into the container and is therefore under a lot of pressure. Propane must be stored in heavy steel containers.

When it comes to propane you have many options to stockpile this fuel, you can go for disposable canisters, you can purchase your own bulk tank or you can lease a 500-gallon tank. It all depends on your needs and on the propane dealers in your area.

Butane is a fuel that boils between 10.9 degrees and 31.1 degrees F. It is sold in pressurized metal containers and it is not widely available. It is fairly expensive compared to other fuels and the price can vary from $3 to $6 for an 8-ounce canister. This is about ½ pound and it provides 15,000 BTU. If you have an appliance with a 7,500 BTU output, it will burn for about 2 hours.

The boiling range for gasoline is between 75 and 500 degrees F. The flashpoint for this fuel is approximately -45 degrees F (45 degrees below zero Fahrenheit). One gallon of gasoline has 125,000 BTU. This fuel can be used in dual-fuel camping stoves or in gasoline heaters.

This fuel is also known as lamp oil, coal oil or paraffin in Europe. The boiling range of Kerosene is between 340 and 572 degrees F. One gallon of kerosene has about 135,000 BTU. The minimum flashpoint allowed for kerosene is 100.4 degrees F.

The kerosene sold in the United States has a flashpoint between 118 and 145 degrees F. If you plan to use kerosene for heating purpose you should keep in mind that it must have a flashpoint of 120 degrees F. Most kerosene heater manufactures specify using only clear #1 grade kerosene (1-K) which can be stored for ten years if the container is filled to the top.

This type of fuel is a cool burning fuel that produces about 2,500 BTU an hour. In order to sell this fuel, some suppliers will say that an 8 ounce can of alcohol fuel produces 10,000 BTU. However, they fail to mention that this output is spread out over several hours of burn time.

This fuel is usually sold in cans that are used with small backpacking stoves. On the market, you can find two types of alcohol fuel: ethanol and methanol. In some states, methanol is labeled as poison and it isn’t allowed unless it is mixed with ethanol.

Wood pellets are made from sawdust waste and are compressed with high-pressure rollers. Most wood pellets are ¼” in diameter and 1” long. It looks similar to rabbit food and one pound of this fuel can produce around 8,500 BTU.

According to manufacturers, one ton of wood pellets will produce the same amount of heat as 1.5 cords of wood. Most commonly, wood pellets are sold in 40-pound bags and the price varies from state to state.

Related reading: How to harvest firewood

According to some, this is the oldest, hardest and cleanest form of coal money can buy. It is preferred by many because unlike soft coal, anthracite will not produce smoke, soot or tar under combustible condition. It’s lower sulfur and volatile content makes it a clean burning fuel.

This type of fuel can be burned in a coal stove or in a fireplace with a coal-burning insert. One pound of anthracite coal will produce about 13,000 BTU. Anthracite is a very efficient fuel and its cost per BTU is significantly lower than the cost per BTU of electric and oil.

Before choosing a type of fuel you have to think about what you will use it for. In addition to its use, calculate if it’s cost effective. You also have to keep in mind that having a versatile fuel type will make your life easier during an emergency situation. And last but not least, always calculate the BTU output you get for your buck before going with a certain type of fuel.