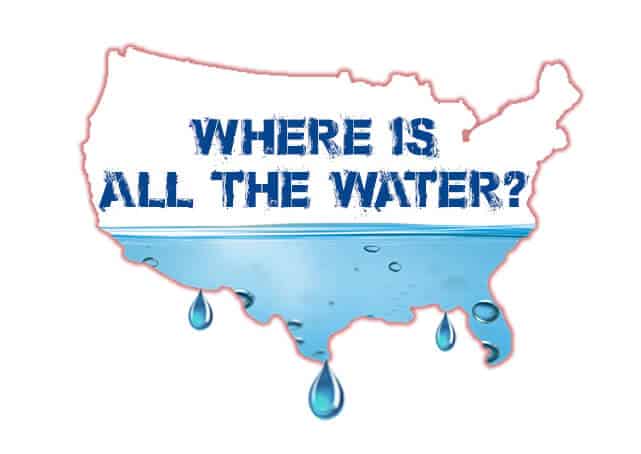 After the fourth consecutive year of drought, the water reservoirs of California began to dry up. This lead to a serious number of water restrictions that Americans have to deal with. Unfortunately, it seems it is not only a short term crisis…it’s the beginning of something bigger.

There are now companies specialized in offering rapid solutions for the dried US lawns, painting them green. From the beginning of the drought, painting lawns became of thriving business. Three years later, without any sign of drought’s cessation, the state’s water commission has imposed a series of regulations under which watering the garden twice or more per week becomes a punishable offense.

In early April, the governor Jerry Brown announced some restrictions that compel water suppliers to reduce deliveries by a quarter, until February 2016. And lawns are not the only things being affected. Water levels in lakes and reservoirs dropped to a historic low. Farmers leave their fields fallow, not having enough to irrigate them.

Along Interstate 5, the vast highway that crosses California we can see only empty fields and dead trees. We can also see the panels installed by farmers, as some of them did not receive water from the government this year. This upsets a lot of people and it can cause social upheaval if solutions are not found.

Where is all the water?

Contents hide
1 Where is all the water?
1.1 Related reading: Natural water sources to exploit
1.2 A new dust bowl is coming…
1.3 Water from Air
1.3.1 Related reading: How to harvest and store rainwater.
1.3.1.1 Other Preparedness and Survival solutions you may like:

Water scarcity is an issue affecting countries in different parts of the world. Extremely dry weather, rapid population growth, poor water distribution or any combination of these factors. For decades the amount of water used by humans has increased even faster than the population.

This means that in 10 years we could live in a world where 2/3 of the population will have to face the stress caused by the lack of it. We will experience a situation in which the water demand is greater than the water supply. Currently, 70% of the global potable water is being consumed by agriculture.

African countries are among the most affected in this regard. Even some European and American countries have great difficulty in providing the necessary water. It seems to be just the beginning and that the global well runs dry. Overall, 783 million people do not have access to clean water.

In arid countries like Israel where virtually no raindrop falls between May and September, water conservation is a lifestyle. Californians do not really care about this since we are used to turning the tap and have water. Israel gets 40% of its water needs through desalination, by removing salt from seawater. It is a solution used now in California.

Among the most widespread desalination technologies reverse osmosis, invented in the 50s, is the most used one. The problem is that this process is very energy intensive. And since we don’t have any other choice, throughout California, desalination projects built and abandoned or reduced by past droughts are now revitalized.

On the other side of the Pacific, in Singapore, obtaining water through innovative solutions is a daily reality. Singapore transforms waste-water into the drinking water due to its NEWater treatment plants. In the United States, the same recycle process is sometimes called “from toilet to mouth” and obviously it has become a sensitive topic.

The government must make greater efforts to familiarize the public with these new technologies. They should advertise how absolutely necessary these technologies are during harsh times. There have been several studies, all concluding that the water thus obtained is safe to drink. The general public should be better informed about what is happening with the water because if people do not know how bad the drought is, they will never understand the need for such things.

A new dust bowl is coming…

As a nation, it seems we have a short memory. The Dust Bowl that hit the US and Canadian prairies during the 1930s is just a distant recollection of events. Even worse, many people don’t even know about it. During the drought of the 1930s, the unanchored soil turned to dust, which the prevailing winds blew away in huge clouds that sometimes blackened the sky.

These choking billows of dust – named “black blizzards” or “black rollers” – traveled cross country, reaching as far as such East Coast cities as New York City and Washington, D.C. The Dust Bowl forced tens of thousands of families to abandon their farms. It caused one of the biggest migrations inside the country. It was an apocalyptic event that destroyed many lives and that catastrophe intensified the economic impact of the Great Depression.

Many scientists are constantly warning the government that a similar event will happen by 2025 if no actions are taken. It seems that nobody is listening to them. The media is busy promoting the race war, while the politicians are struggling to increase their revenues through various schemes.

A possible answer could be found in genetically modified crops, designed to withstand drought conditions. Although GMOs are not indicated, for desperate farmers, planting crops designed to resist drought could be a way to prevent the depopulation of their plains. And even if we are being fed GMOs and we are destroying our health, being able to avoid bankruptcy is more important for some. Everybody needs to survive in this dog eat dog world.

Reducing the amount of water used is one thing, but creating water sources where there are none is a totally different thing. An interesting approach, tested in communities worldwide, is collecting fog. Everywhere, from Chile to Oman, researchers and locals alike are looking for ways to install systems designed to capture atmospheric moisture.

In California, there is an increased demand for installing fog traps and systems that produce water from air. In a pilot project in Guatemala, the people from the Tojquia town managed to install a system composed of 30 fog traps. The system helps to extract 1585 gallons (6000 liters) of water.

When it comes to survival, having a device that turns water from the air makes a huge difference. It’s already starting to become a common practice to make one or have one installed. It’s probably just a matter of time until the government finds a way to outlaw these devices, seeing that they do not like it when people become self-sufficient. Even collecting rainwater is becoming illegal…

Related reading: How to harvest and store rainwater.

As the year is coming to an end and after a few years of drought, people are still not fully aware of what a water shortage means for our country. It is not a one-time occurrence and it’s been going like this for the last four years. The recent wildfires and the rising food prices are just a few examples of what a megadrought can cause.

Most people don’t even think about it and don’t even realize how rare water is becoming. They think that if they live in a state where they have enough water, the mega-drought will not affect them. Those people couldn’t be more wrong than that and everything that a megadrought brings will hit them sooner or later.

Everyone, from politicians to farmers and water bottling companies that drain ground waters should be more responsible. They should think less of their profits. They should work together to stop the Earth from becoming something else than a Blue Planet.

Since it’s not an ideal world, we should all take precautionary measures in order to make sure our loved ones have all the water they need.

6 thoughts on “Mega Drought In Progress – Where Is All The Water?”