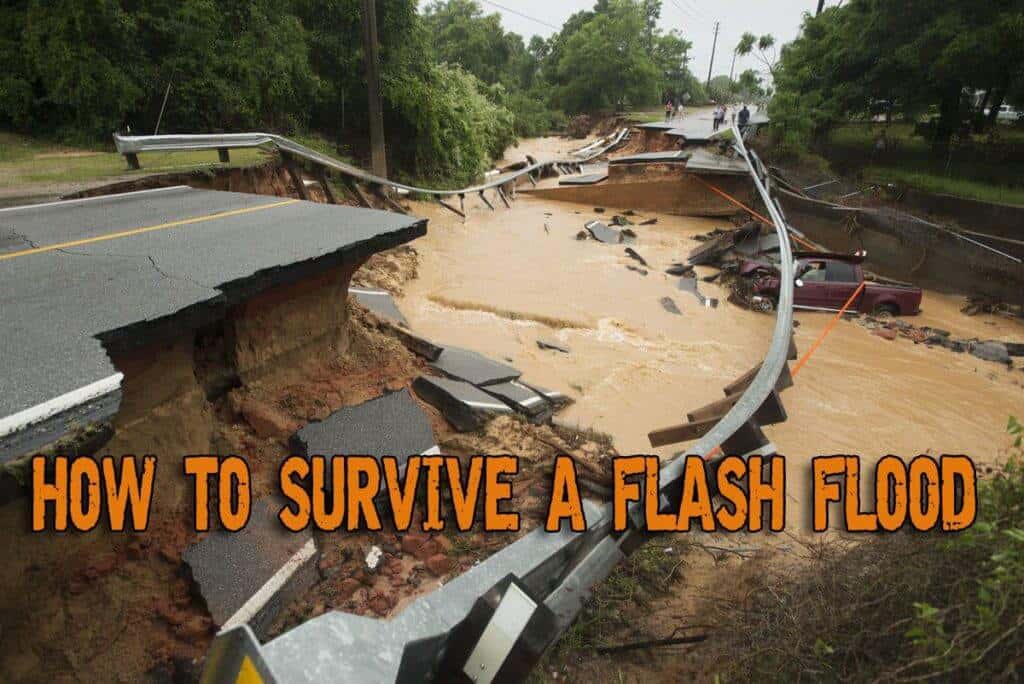 Exploring the great outdoors can be as dangerous as it is beautiful. Learning how to survive a flash flood should be basic knowledge for outdoors men. You may think you found a perfect place for camping, but it could be the worst decision you are making. Your geographical environment, weather conditions and topography of the local terrain should be carefully considered. Otherwise, you camp could be washed away by a powerful flash flood.

The risks from flash flood usually come as a result of the poor choices you are making when setting up camp in the wilderness. Even more, the rash decisions you make when encountering rising waters in familiar areas will cost you dearly.

Flash floods are the most common natural disaster in our country. They strike hard and fast, and your response time should be adequate. To survive a flash flood, everyone should understand how this disaster occurs and what to do to protect themselves.

When it’s more than just rain

There is a key element to help you figure out how to make a difference between a flash flood and regular flooding. It’s actually the time it takes to occur, which is usually within a six-hour time span. This short time frame will catch most people by surprise, and they are unable to react properly.

While persistent and intense precipitations are the main reasons why flash floods are formed, numerous reasons can form an unstoppable liquid fury.

When precipitation falls rapidly, in a short amount of time, on rain-saturated soil or very dry soil a flash flood will form, washing down everything in its path. Another reason why flash floods occur is a volcanic activity that melts surrounding ice and snow. The runoff flows down the mountainside and takes everything it encounters downstream.

Also, hurricanes and tropical storms can unleash huge quantities of rainfall in a short time-frame. A wall of water is formed and it will overwhelm everything in its way. Even manmade mistakes like dam failures or broken water mains can cause flash flooding.

How to survive a flash flood – Avoid unsafe areas

In the wilderness, a tired hiker can have impaired logical thinking. This usually leads to setting up camp just about anywhere. Since flash floods are not bound by geographical areas of the country, this can be a big mistake. More people die each year from flash flooding than any other danger you could encounter in the wilderness. Mother Nature’s moods such as tornadoes, lightning strikes, and even hurricanes cause fewer deaths than flash flooding.

When you decide to set up camp, there are some warning signs you should check if you want to avoid waking up in a river.

The first thing you need to do is to avoid gullies and bottlenecks of canyons or steep valleys. The fast pouring rain will be diverted into the funnel-like opening, and it creates a highly pressurized stream of water. You will not be able to escape this since it moves way to fast.

Second, check the soil and the ground from your camping site. Is it saturated dirt or clay-like? Clay will not offer proper drainage and the water will flow on it. If you also notice ripples of sand or dirt nearby, that’s a bad sign. It shows that nearby water sources are dropped downward by the slope of the landscape.

And lastly, make sure to check the shorelines of streams, river beds or creeks for signs of high-water marks. Never set your camp below the high marks you can find.

How to survive a flash flood – Beating the rise

The aftermath of a flash flood, a real danger

If you manage to survive a flash flood and the waters in the area nearby start receding, it doesn’t mean it is safe to venture out there. There are many precautions you should take during the aftermath of a flash flood. Here are my recommendations:

Although water is the life source for all the living creatures on this planet, it can also become a danger to us. It can certainly sustain life, but it will also take it away. A flash flood is a powerful natural disaster that hits without warnings.

If you want to survive a flash flood, learning about how they form, how your region is affected by such disasters and what to do if it occurs in your area is key. The more you think about it today and prepare for it, the less you will worry about it tomorrow.