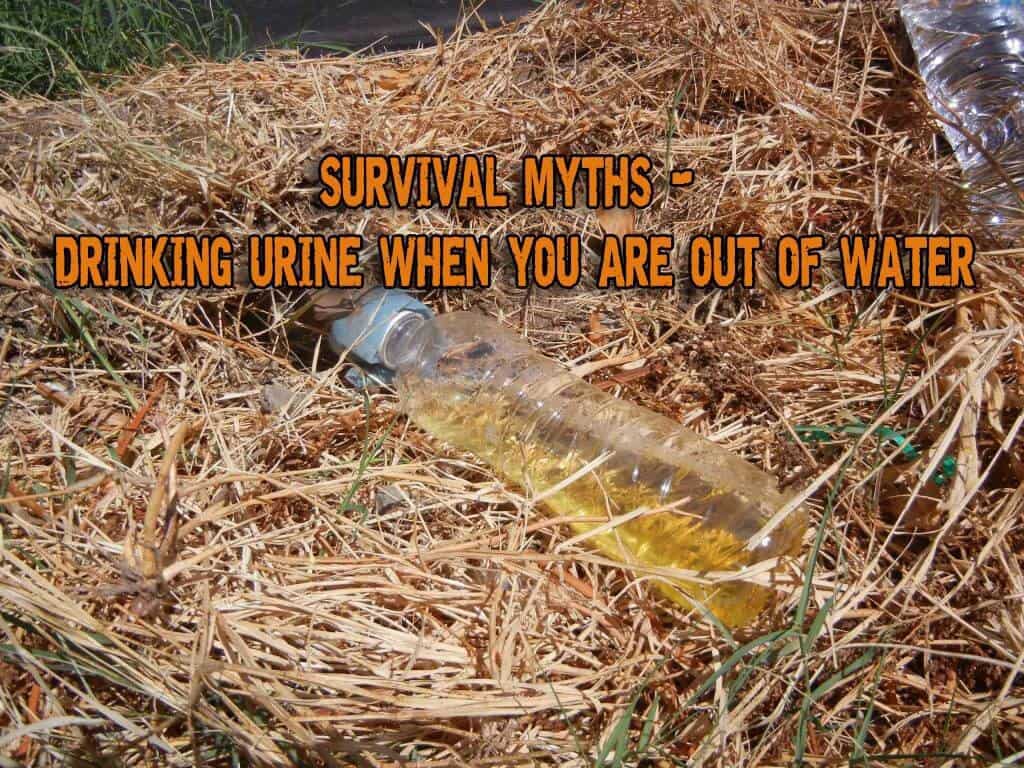 If you are stranded in the wild or in an environment that lacks water you have to make do with what you’ve got in order to survive. Some people will do everything to survive, including drinking urine to quench their thirst. Let’s see where this myth comes from and if drinking urine is safe or not.

The thing is that you’re not the only one who thinks drinking pee in a survival situation is a good thing. In fact, a lot of people believe that their salvation lies in the yellow drink. However, just because it’s yellow, doesn’t make it lemonade.

I have a close friend activating in the survival and emergency preparedness fields. He is organizing survival classes during the weekend in various environments. He tells me that every time a new class is assembled, someone asks about drinking urine when he gets to the importance of water in a survival scenario. I’ve discussed with him about this myth and here is what he tells his apprentices.

The myth of drinking urine when there’s no water

Contents hide
1 The myth of drinking urine when there’s no water
1.1 The reality
1.2 Why do people believe drinking urine is fine?
1.3 What is the alternative?
1.3.1 Related reading: Drinking Water Survival Myths You Should Know
1.3.2 You can make a solar still and extract the water from your pee.
1.3.3 Here is how to do it:
1.3.4 Alternative reading: The Importance Of Water To Survival
1.4 Conclusion
1.5 Useful resources to check out:

This myth started with books and movies, and in most recent times it was exploited as a shocking alternative to quench your thirst, by certain survival TV personalities. All with the sole purpose of gaining a larger audience for their TV shows. Due to those reasons, many rookie preppers and survivalists think it’s ok to drink urine as a last resort. First of all, everyone should learn how much the average person can live without water. If you have adequate shelter to protect you from the changing weather, you can live for three days without water, even stretch it to four days. Some lucky survivalists have stretchered this time with an extra day or two by drinking their pee. However, this doesn’t mean it’s a good practice and it won’t work for everyone.

Even if you are in good shape, well-hydrated and you eat healthily, your urine is still leaden with waste compounds. You should have learned by this age that no urine is sterile. Your body is eliminating urine for a reason, and that’s to get rid of toxins and bacteria. Your urine contains more than 2,000 compounds and around 100 of those are bacteria. The other compounds are waste from bodily processes.

What does this mean is that most of the chemicals found in your urine come from your diet, environment, medicines, cosmetics and what not.  Your body can’t recycle these compounds and it’s trying to get rid of them.

Even more, if the situation is grim and you are approaching a hydration deficit, drinking urine will make things even worse. There will be a much higher concentration of bacteria in your urine, than usual.

Why do people believe drinking urine is fine?

Since normal urine is almost 95% water and around 5% waste. People believe that the water percent is high enough to be on the safe side. However, as the person becomes dehydrated, those number will change dramatically. In this case, drinking the yellow liquid is less desirable. The science behind drinking urine shows that the most side effects are diarrhea, vomiting and electrolyte imbalance. There are also some other side effects that can make you ill, but those three alone will leave even more dehydrated.

The U.S Army, field guide has a section dedicated to what liquids should you avoid drinking during a crisis. Urine is right next to ocean water and blood. Not to mention that if you get injured, your pee can be even more dangerous than the one of an unharmed survivor.

What is the alternative?

There are various ways to stay hydrated on the field, and there are some alternative uses for your pee. Pee may not be a great choice as a beverage, but it’s doesn’t mean it’s useless.

The desert may be the only environment where water sources can’t be found. Even so, only those driest deserts will leave you with no alternatives. Otherwise, numerous plants contain water which you could extract or tap during various seasons. Just make sure you correctly identify the plants you plan on using and determine during which season they provide water.

Another alternative is to collect sap. For example, male sap can be collected between February and March if you drill a hole in the right tree. That water is perfect for drinking since it was filtered by the woody tissue of the tree. It has a trace of sugar and its sweet to the taste.

You can use your pee to start a fire. A water bottle filled with urine (fairly clear pee, not too dark) will act as a lens of sorts. The trick is to hold the respective bottle upside down, thus allowing the sun-rays to pass through its convex top. In this way, you’ll be able to focus the sun-rays onto tinder (you must get some tinder before engaging in this exercise) or a piece of paper. Provided you’re patient enough and you’re lucky to benefit from a sunny day, sooner or later you’ll admire your smoldering ambers.

Stale urine also can be used and in fact, it has been used for thousands of years for a wide range of purposes. When the urine breaks down for a few days, it will have a high concentration of ammonia. Ancient Romans used it to white their teeth and later people used it to dye their clothing and tan animal skins. The early pioneers used to fertilize their crops and even to make gunpowder.

You can make a solar still and extract the water from your pee.

Here is how to do it:

What you need to do first is to dig a hole in the ground where the soil is exposed to sunlight. Put a plastic sheet inside the hole and place a clean water container in the center of the hole. The urine has to be deposited in the excavated area around the container. Digging a hole requires some energy, but the best part is that once you’ve excavated it, you can use it as many times as needed.

At sundown, you will need to cover the hole with a plastic sheet or a tarp. Whatever you use, make sure you secure it with large rocks on each corner. The sheet shouldn’t touch the sides of the hole and stay suspended over it.

The next step is to make a dip in the center of the cover directly above the container. Use a small rock for weighing it down. The reason you need to do this is that the dip will serve as a condensation and distillation point. During the day, the heat will distill urine from the ground and water vapors will be collected on the underside of the plastic sheet.

If you’ve done everything according to the instructions, condensing water will drip from the plastic cover into the container. The minerals and impurities from the urine are too heavy to evaporate, so you don’t have to worry about it. Only the water content, which is distilled by the sun’s heat, evaporates and gets trapped by the plastic sheet. As a result for the entire operation, you get potable drinking water and you’ve learned how to make water from urine.

Alternative reading: The Importance Of Water To Survival