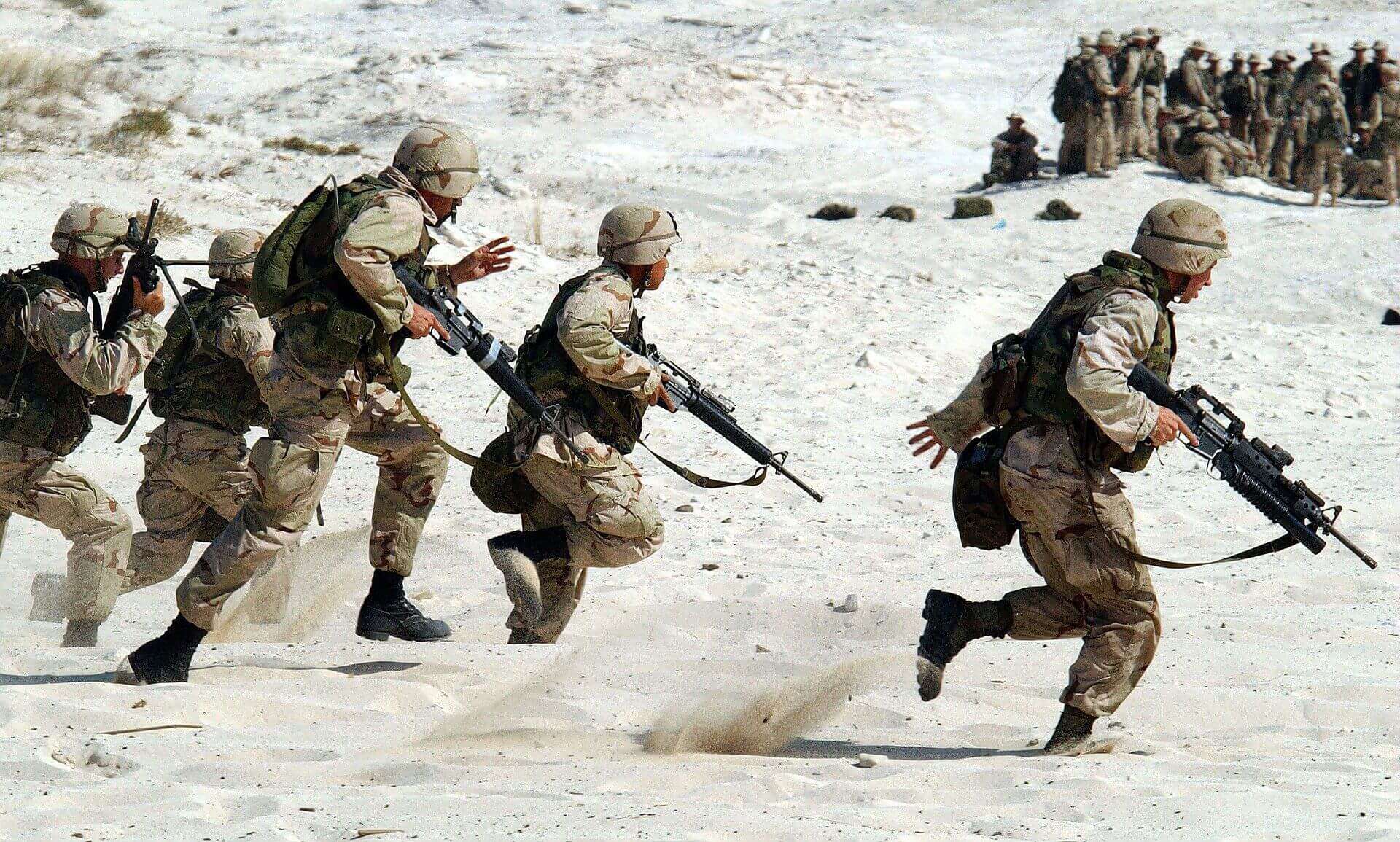 “The control of a large force is the same in principle as the control of a few men; it is merely a question of dividing up their numbers. Fighting with a large army under your command is nowise different from fighting with a small one. It is merely a question of instituting signs and signals.”—So wrote the Chinese General Sun Tzu in his treatise The Art of War some 500 years before the birth of Christ. Today we are going to cover the small unit tactics that every survival group should know.

This “span of control” continues unbroken right up the ranks with normally no more than four to five combat leaders ever reporting to anyone, including the “General of the Army.”

In an infantry division all crew-served weapons, including machine guns, mortars, armor, and artillery are structured as separate units for training and maintenance purposes but in actual combat are assigned to rifle units either directly, as in the case of machine guns, or in support, as with artillery.

In spite of all the manpower and materiel suddenly thrust upon the rifle units for direction and control, each infantry leader from squad to regiment finds he is burdened with only one or two more persons reporting to him. Thus the principle of “Span of Control” is maintained, and the genius of Sun Tzu confirmed. 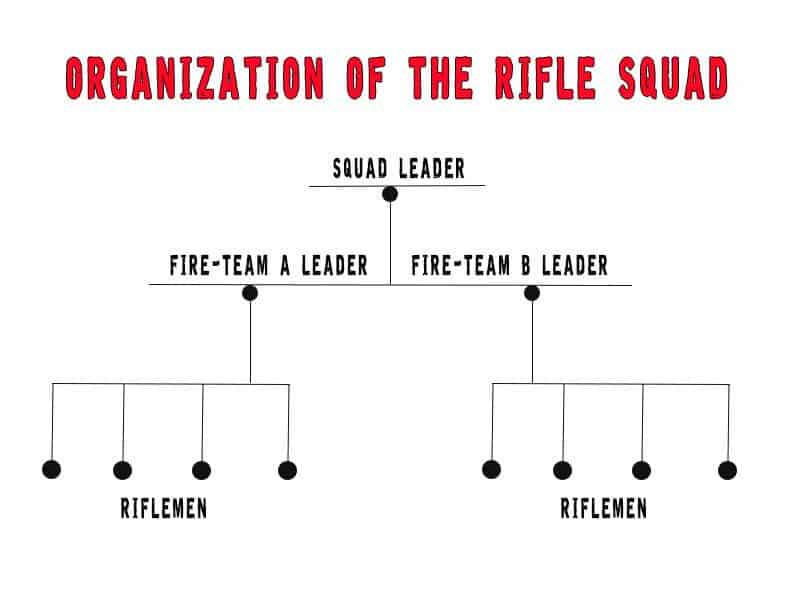 Armies at war maintain “Order of Battle” maps showing disposition and deployment of enemy forces. The smallest tactical unit shown on such maps is the infantry battalion. Generals need to think in broad sweeps, and infantry battalions form a handy yardstick for rapid assessment.

For survivalist purposes, our concern is on small unit tactics, namely squads and platoons. They will normally operate alone with no supporting air, armor, or artillery and even without machine guns and mortars. If we learn to handle them well, then handling larger units should prove no difficulty as the same principles of tactics apply.

What are small unit tactics? How do tactics differ from strategy?

I’ll give my definitions, which incidentally, don’t come from any textbook. The strategy is nothing more than the overall plan and tactics are simply the optimum use of weapons. The Roman Army used the close-ranked phalanx, with men standing one pace apart because their main weapon was a two-foot blunt-ended stabbing sword.

Modern armies disperse their riflemen at least five yards apart to minimize casualties. The Roman Army fought hand-to-hand as a standard practice. This is something very rare for a modern army because of its awesome firepower. Thus, while weather, enemy, and terrain are important aspects of all tactical considerations, the weapon is the distinguishing element and the essential cause of variations in tactics over the course of history.

Survivalist units should be armed uniformly for parts interchangeability and ammunition resupply. I recommend each rifleman be armed with a .223 semiautomatic rifle, bayonet, a .45 caliber semiautomatic pistol and hand grenades, both concussion, and fragmentation types.

Team, squad, and platoon leaders should be armed exactly as the riflemen, and everyone must carry an entrenching tool. Units must train to operate as independent-unit foot soldiers, so all crew-served weapons will be excluded because of their supply and transport requirements.

There will be no support services, so supplies will amount to what each man can carry on his back. Supply caches of food, water, medicine, and ammunition should be maintained within the anticipated operational area of each unit. On the same page, you should read this article on firearms recommended for preppers.

In small unit tactics, marching plays an important role. Used in approach to contact the enemy, to withdraw from the enemy, or merely ranging over an area as a screening force.

Think of infantry war as a T. You move in a column and fight on a line. Move in a column of twos with each man five yards behind the other and each column five to 10 yards apart from the other. Spacing will vary depending on the terrain and the time of day. 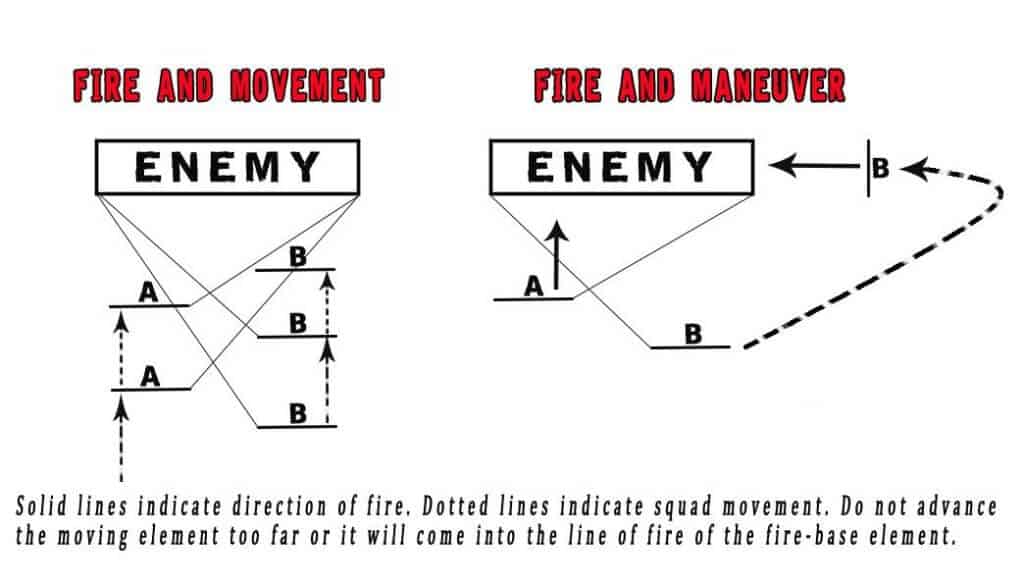 A platoon on the march should use advance, flank, and rear guards to protect the main force. An independently operating squad lacks the manpower for such guards. Instead, lead men watch the front, center men the flanks and rear men the rear.

Never permit straggling during a march. The men must be trained to keep a moderate pace, and with 10-minute rest periods every hour, they should be able to march at least 10 hours a day.

During night encampments, guards must be posted for protection. Guards should not stand or walk their posts as this makes them easy targets for infiltrators. Instead they should sit in locations offering maximum cover and concealment as well as a good overall field of vision. Rotate guards every two hours to minimize their tendency to fall asleep from fatigue.

If contact with the enemy is made during a march, the unit leader must decide on one of three courses of action: WITHDRAW, ATTACK OR DEFEND.

The rifle squad attacks using fire and movement or fire and maneuver. One fire team becomes a base-of-fire and remains in place while the other team moves directly forward (movement) or attacks from the flank (maneuver). In movement, the fire teams take turns as fire-base and moving elements. After moving forward Team B stops and becomes the fixed base-of-fire while Team A moves up and then past them.

The men move forward either by crawling or in short rushes depending on the volume of enemy fire. “Leapfrogging” continues until both teams are close enough to assault the enemy position.

In maneuver, Team A remains as the fire-base until Team B’s flanking fire so disrupts the enemy that both teams can move in for the assault. The rifle platoon attacks in the same way as the squad: The three squads take turns as fire-base, and moving elements or two can remain as fire-base while the third maneuvers.

DO NOT use double envelopment (pincers move) as it is difficult to control and often results in friendly forces firing on each other. 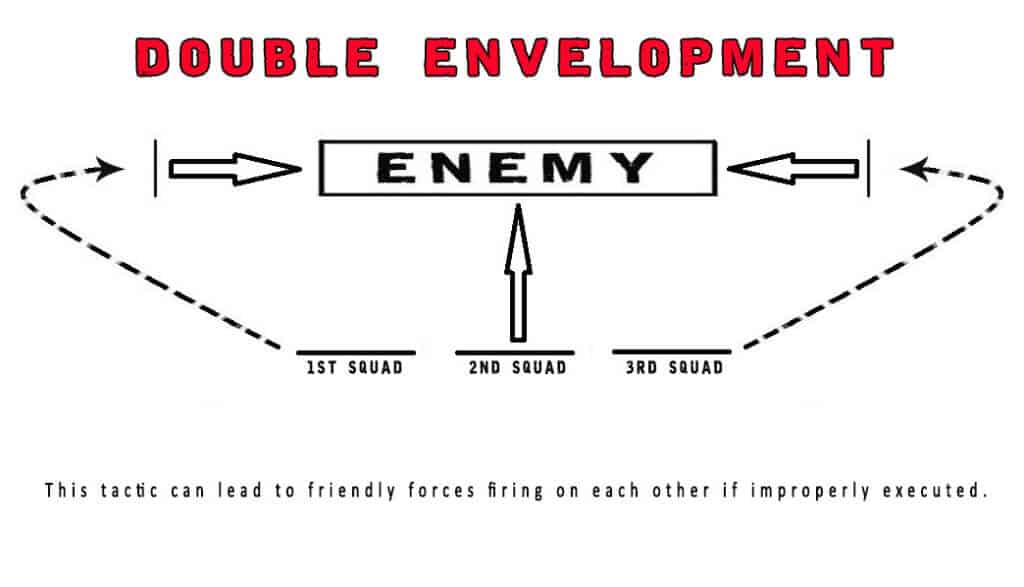 The purpose of infantry is to close with the enemy to capture or destroy him. The unit leader makes the decision to assault based on the enemy’s fighting condition as well as nearness to his position. For small unit tactics, this is normally within 10 yards.

After completing the assault, either consolidate the position by digging in or move away using march tactics. Although daytime frontal attacks may inflict substantial casualties on the attacking force, they are normally preferable to night attacks because of the problems with control caused by poor visibility. 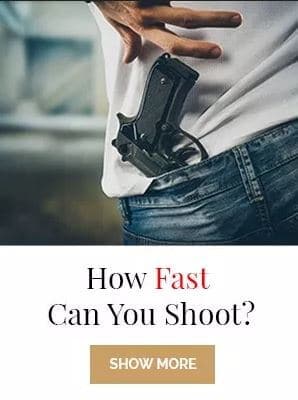 The most important factor in a successful attack is to get the men to fire and then to keep them firing. Experience has shown that this is a very difficult task to accomplish and one that requires firm leadership.

The Military Historian Brig. General S.L.A. Marshall studied front line warfare in World War 2 and concluded that only 15 percent of riflemen in action actually fired their weapons in battle. The reason? Firing means exposing your head or body, so most men hid their heads in their hands and let the firing be done by others. The thought that “If I don’t fire at them, they won’t fire at me” is also a contributing factor to poor fire-discipline.

Read next: Counter Sniping Tactics Mandatory for Preppers and Survivalists

Rifles should be zeroed in for 300 yards range, but use aimed fire only at rest, from prone or sitting positions. When moving forward in a standing position as in the assault phase of the attack, all fire should be by instinctive pointing, with rifles held at waist level and the eyes concentrating on the targets. No one can align sights properly when walking rapidly, and if the men stop to aim, the momentum of the assault will be lost.

Be sure to keep the fire-base elements firing while the moving or maneuvering elements are in motion as such firing tends to keep the enemy heads down, thus reducing return fire. The hit rate or rifle fire in modern armies is estimated at under five percent, so if you can get your men to fire at all, and then to fire with some accuracy, you will really have achieved something.

Poor marksmen have plagued armies for a long time, as evidenced at the battle of Rosebud Creek on June 16. 1876, when U.S. General Crook’s men fired some 25.000 rounds and hit only 99 Indians, 252 rounds per hit!

On the same topic as small unit tactics, we recommend checking out our other articles:

For small unit tactics, defend on high ground if possible. Do not dig in on the highest part of the ground as your men will be silhouetted against the skyline. Form your main line of resistance (MLR) on ground, which gives good fields of fire as well as an escape route for withdrawal.

A squad should deploy on one line with foxholes staggered at both ends of the line to allow fire to both front and flanks. A platoon can deploy with all men on one line or can keep one squad in reverse (Dug in behind the MLR) to be used against flank or rear attacks or to reinforce the main line if there is a breakthrough. 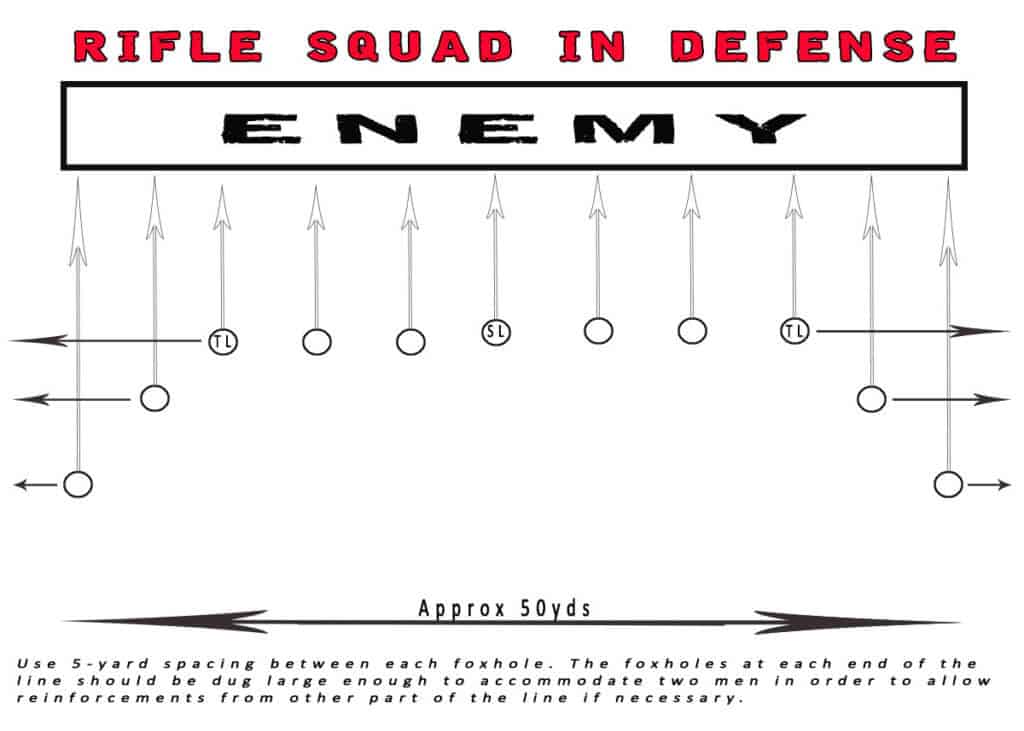 Since survivalist platoons will normally operate as independent units, I recommend all squads deploy on one line with end squads using staggered foxholes to protect the flanks. DO NOT use outposts as they will be destroyed piecemeal. Keep all men on or behind the MLR. In small unit tactics no man should be disposable.

When you withdraw, do so by echelon with elements of your force taking turns with covering fire until all are withdrawn. Defensive tactics should always be viewed as a temporary expedient by any unit operating alone. DO NOT allow yourself to be pinned down but withdraw as soon as possible. After withdrawal, march tactics are reinstituted.

By training in the small unit tactics covered here, your units will improve over time. If units should merge to form larger units such as companies and battalions, use the same tactics to handle them. The larger the unit, the more vital communications become, either with radios or with runners, in order to control and coordinate.

You will normally use offensive tactics only against an inferior force (except for hit and run). For small unit tactics, use a defensive strategy against a superior force and then withdraw. Do not counterattack as you risk being drawn into a trap.

To be a successful tactician, keep in mind the three principles of war used by the French Army:

These are mandatory for small unit tactics. Finally, give heed to the U.S. Army’s axiom: “A poor plan well executed is far better than the best plan poorly executed.”

You may also want to check these: