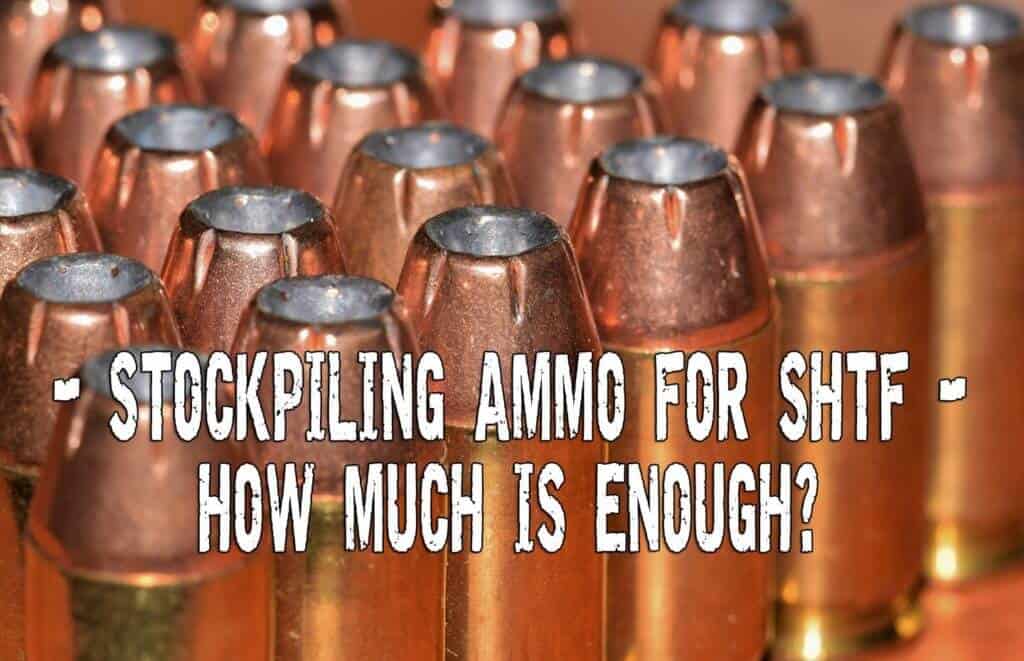 Many preppers invest a lot of their hard earned money in stockpiling ammo. This practice is widely spread and is considered a safety net in case it hits the fan. Answering the age-old question of “how much ammo is enough?” is not easy and the following should be considered.

Most of my friends often ponder when it comes to buying ammo. Should I buy 100 rounds or 1,000? This is one of the questions I often hear and is soon followed by another: “How much do you have?” These are all questions both beginner and experienced shooters ask at some point. In my experience, these looming questions have a multitude of responses. However, is there really a correct answer for them? I believe there is and here is my opinion on the entire ordeal.

Just like your car operates on gas, your firearm is of no use if you don’t have enough ammo for it. With increasing scares about ammo shortage, stiffer legislation and all sorts of crisis hitting us every day, people are starting to stockpile. Having enough ammo is always a concern and for the preppers out there with a military background, it becomes a constant burden.

Ammo as a long-term investment

Contents hide
1 Ammo as a long-term investment
1.1 Related article: A prepper’s cache, an aid during harsh times
2 Ammo is a precious commodity
3 Ammo in numbers
4 Ammo for training
4.1 Related reading: 5 Guns Every Prepper Should Own
5 Buying ammo the smart way
6 My advice
6.1 Other Useful Resources:

Since the government is trying to regulate firearms and ammunition, those who invest in ammo see it as a long-term investment. Doing so while the opportunity is still at hand is no different than investing in the stock market. If you remember the .22LR ammunition shortage from 2008, you probably have an idea of what I’m talking about. Back then the price surge made it almost impossible to get your hands on it and it showed us that the gun market can be highly unpredictable.

I’m not debating here about the reasons behind the high cost of ammunition and how it continues to rise year after year. I’m just pointing out that people should buy now before there’s a reason for prices to surge. Hoarders and media propaganda will influence the cost of ammo and buying as much as you can right now is the logical thing to do.

Related article: A prepper’s cache, an aid during harsh times

Ammo is a precious commodity No matter how you look at things, ammo is a valuable commodity and we often forget about this. Since ammo requires raw materials to be made its value will only increase in time. Lead, copper and aluminum, just to name a few are resources that will become depleted at some point. The rise in materials cost will trigger a surge in the price of ammo. Since your bullets consistently increase in value, you should cash in on ammo if presented with the opportunity.

Even more, during a prolonged crisis, you could use your ammo for barter. Yes, I know that this is a delicate topic and many people advise you not to trade ammo at all. Most believe that you will give others the tools to hurt you if you trade your ammo. However, if you live in a trust-worthy community or if you are part of a survival group, bartering with ammo should pose no danger to you.

People ask me to give an exact number when it comes to storing ammo and I find this quite funny, to be honest. The reason behind my amusement is that there’s no definitive formula to calculate how much ammo you should own. Some people say that 1,000 rounds of each caliber are enough, while others can go even further. I personally know people that have more than 10,000 rounds for each caliber and they still don’t feel covered.

The point here is that every individual’s needs are going to be entirely different and you can’t make a proper comparison. What works for others isn’t necessarily going to work for you. Even more, there are a few factors that will influence the number of ammo you plan to stockpile. Factors such as the living area, population density, level of training and purpose of use are all things one should consider.

I’ve mentioned above that the level of training plays an essential role in storing ammo. In fact, you need to spend some time training with your weapon of choice if you don’t want to waste ammunition. It is a no-brainer that an accurate shooter will exhaust less ammo. Therefore, if you know how to shoot, you will not need 10,000 rounds to hit your targets.

The downside of training on a regular basis is that you will exhaust a lot of rounds to get to the point when you no longer miss your target after emptying your clip or magazine. Even more, an experienced shooter knows that a certain quantity of ammo is required to keep those skills polished.  The bottom line here is that you should stockpile enough ammo to feed your training sessions without running too low on your SHTF reserve.

Seeing that stockpiling ammo can have a massive impact on your household budget, you need to shop smart. A great way to do so is comparing and choosing the best rifle caliber for your situation and buying what works for your budget. Having only one main cartridge is a great alternative to just buying them all. Getting used to one round and its ballistic aspects will also help you to become a more accurate shooter.

You can save a lot of money if you buy in bulk. If that’s not possible, you can buy a few boxes of ammunition every paycheck you get. It may take time to build a serious stockpile, but it won’t affect your way of living and you won’t cut back on your comfort.

Look for deals online and take advantage of gun shows every time you can. I’ve used these two methods to buy cheaper ammo and I guarantee it really works to save a buck or two. Pay attention to the market and inform yourself if you want to save money. Take a look at the news, read magazines and join forums or newsletters from your area. It should be easy enough to understand the signs of a possible national ammunition shortage.

Another thing that I’ve often seen, even in my network is people spending a lot of money on “funny rounds,” as I call them. They buy all sort of ammunition that’s new on the market just for fun, from incendiary shotgun shells to “zombie rounds” or hollow bullets. While I can understand the excitement of trying something new and out of the ordinary, I can never understand doing this while you’re on a tight budget. The temptation is always there and I recommend controlling yourself unless you have money to burn.

Ammunition will always be in demand and it becomes invaluable during a SHTF scenario. You can never have too much of it in my opinion, but you shouldn’t have tons of it if you have other priorities. You can’t eat bullets during a famine and going Rambo style to get supplies from others will not work for long. When stockpiling ammo, it merely comes down to how much you can realistically afford without impacting your way of living.

You should be able to stockpile ammo while still being able to live within your means. Start slow and steady and if you stay constant, you will have a serious stockpile in no time. Remember to keep on buying, but also to keep on practicing if you want to use your ammo wisely.

13 thoughts on “Stockpiling Ammo For SHTF – How Much Is Enough?”