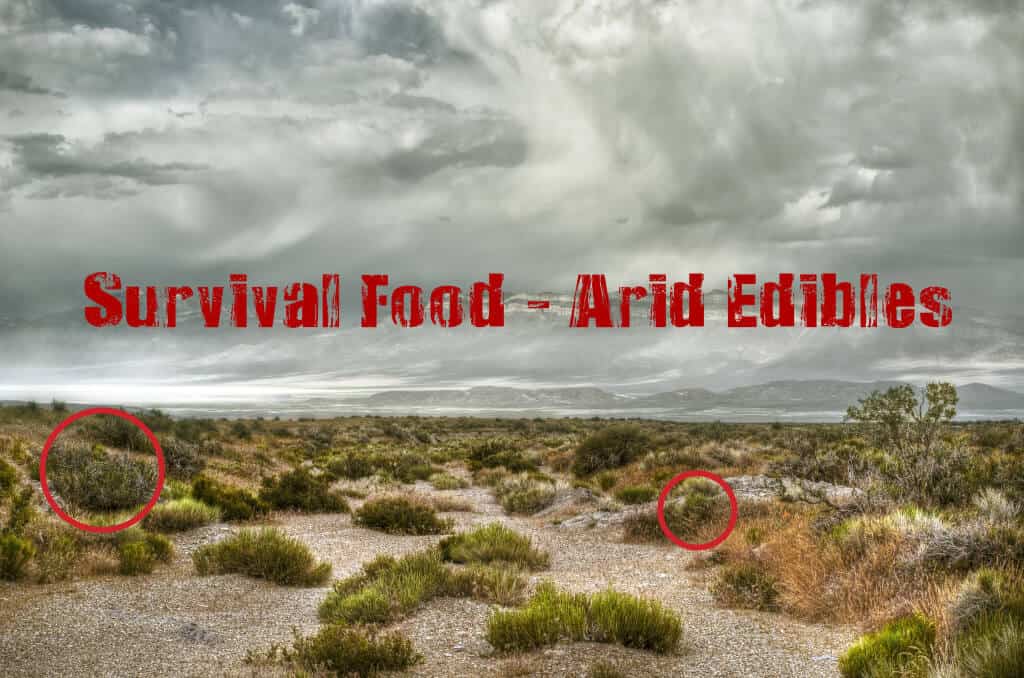 Wild edibles are a precious source of food when you find yourself lacking the resources to survive in an unknown environment. Since nature doesn’t always play in your favor, you could be wandering on unfamiliar grounds like the desert. In the United States, some major areas are deserts, and although it might not be a favorable environment to thrive in, the desert can provide arid edibles that will help you to push forward.

We have the Mojave Desert, which goes from southern California into Mexico, and we have the Great Basin that covers much of Utah and Nevada, and these are just two examples. Regardless of the desert, the flora is quite diverse, and there are plants that grow only in the desert regions.

Here is a list of the arid edibles you should harvest and use if you are stranded in the desert. The wild rhubarb is related to the curly dock; most people think it’s a smaller version of that plant when they first see it. This is a perennial flowering plant native to the western United States and northern Mexico. It grows up to 2-4 feet tall, and it has leaves that vary in size from 6 to 24 inches. It forms 6-parted flowers that grow in a dense cluster.

The leaves taste sour, and you must collect the youngest ones to make spinach-type dishes. They are best boiled; you must change the first water and cook them again to obtain a mild dish. The mature seeds are also edible, and they were used by the Native Americans as an additional ingredient for soup-type dishes. Also known as golden chia or desert chia, this is an annual plant that was an important food source for the Native Americans. It currently grows in California, Nevada, Arizona, New Mexico, Sonora, and Baja California. The plant grows up to 19 inches tall, and it stem hairs are short and sparse in distribution. It has finely wrinkled leaves with a square stem that rises no more than a foot. There are usually 1-2 clusters of flowers, and the color varies from pale blue to blue and purple-tipped.

The seeds of the desert chia are a good source of protein and July is the perfect month to gather them. Although they are not the same seeds as the ones sold in the stores, the golden chia seeds can be used just the same. You can add them to drinks and coffee, tossed into a salad or added to bread. Also known as the pignut or wild hazel this plant is a native shrub to Southwestern North America and can be found in the Colorado Desert, California, Arizona, and Utah. Jojoba is widely known for the quality oil produced from its fruits. The plant typically grows to 6 feet tall with a broad, dense crown. It has oval leaves up to 2 inches long, and its flowers are small and greenish to yellow in color with sepals and no petals. Jojoba blooms from March to May, and the fruit is usually ripening in the summer when you should harvest it.

Native Americans have used jojoba oil for cooking, hair care and as a healing aid for many medical problems. The Indians used to grind and roast the seeds and make them into a beverage. Hunters and raiders ate jojoba on the trail to keep hunger at bay. The twigs of this plant can be brewed in water to make a pleasant beverage and the tea has many medicinal proprieties. The Mormons used the tea to relieve difficult breathing conditions caused by asthma.

You may also like: Survival Food from the coastline – Edible seaweeds Various types of yucca are spread through desert regions, and all these arid edibles have similar food properties. The Hesperoyucca whipplei genus is native to Southern California. It produces a stemless cluster of long, rigid leaves which end in a sharp point. The leaves are 8 to 35 inches long and have a gray-green color. It grows hundreds of elliptical (bell-shaped) white to purplish flowers.

The Native Americans used this plant extensively and the fiber from the leaves was used for sandals, cloth, and rope. The flowers can be boiled, seasoned, or added to flour and formed into paddies. Also, young fruits are good boiled or roasted. The root is not edible so do not waste your time digging for it. This is a survival tree native to the Southwestern United States and it’s one of the most common plants of the Sonoran Desert. This is a slow growing tree that can reach heights of 16 feet. It has yellowish green leaves, but during extreme dry seasons, the tree will shed them. The flowers occur in late spring and have a pale yellow color. The seeds can be found in soft pods and they ripen in July, the perfect month to harvest them.

The Seri people used this tree to supplement their food source. They used to consume both seeds and flowers. The seeds were ground into flour and used for cakes or biscuits. This is a small thorny shrub that is native to the Southwestern United States and Mexico. It’s considered an invasive species. The tree grows up to 50 feet in optimal conditions, but the average height is around 30 feet. It has feathery foliage and it flowers from March to November with pale, yellow, elongated spikes and bears straight, yellow seedpods.

This is an important survival plant because it fruits even during drought years. The fruits can be eaten when mature and can be ground into meals for sweet flour to make drinks and bread. The hardwood was also used by the Seri people to make arrow points. The most culinary species is the member of the “prickly pear” also known as cactus fig. These plants typically grow with flat rounded cladodes. They have a variety of spines so you have to clean them before eating the pads. You can eat them raw or added to various meals. The young pads are also a good source of water although the taste is sour. The fruit of the cactus fig can also be eaten, but you have to carefully remove the small spines.

The Tequesta Indians used to roll the fruit in the sand and then burn it over the flame of a campfire. In Mexican folk medicine, the pulp and the juice of the cactus were highly valued. They were used to treat wounds and inflammation of the digestive tract. This survival plant is also known as the desert fan palm or California palm. It is native to the Southwestern United States and Baja California. Californian fan palm is an evergreen tree like plant that can grow up to 66 feet tall and 20 feet broad. It has a fan of leaflets up to 6 feet long with white fibers.

The small black fruits have a hard seed surrounded by the sweet thin flesh. The fruit of the fan palm was eaten raw, cooked, or ground into flour for cakes. Southern Paiutes have written memories of using this palm’s seed, fruit or leaves for various purposes including starvation food. This is a flowering plant native to the Mojave Desert, and it resembles a candle. It is an annual plant growing up to 2 feet in height, with a thick, swollen stem that looks like a yellow candle. It has basal leaves that are 2.7 inches long, and the flowers are small with four purple petals. The edible parts of the plant are the young leaves and seeds. If you plan to eat the leaves, you should cook them twice to make them palatable.

These are the arid edibles that you should look for if you get stranded in the desert. These plants can become a good source of food if nothing else is available, and you should learn about how to identify them.

These plants were used by the Native Americans and some of them are widely used even today. This proves even more how important they are in a hostile environment like the desert.

Bullet Proof Home (Learn how to Safeguard your Home)Save