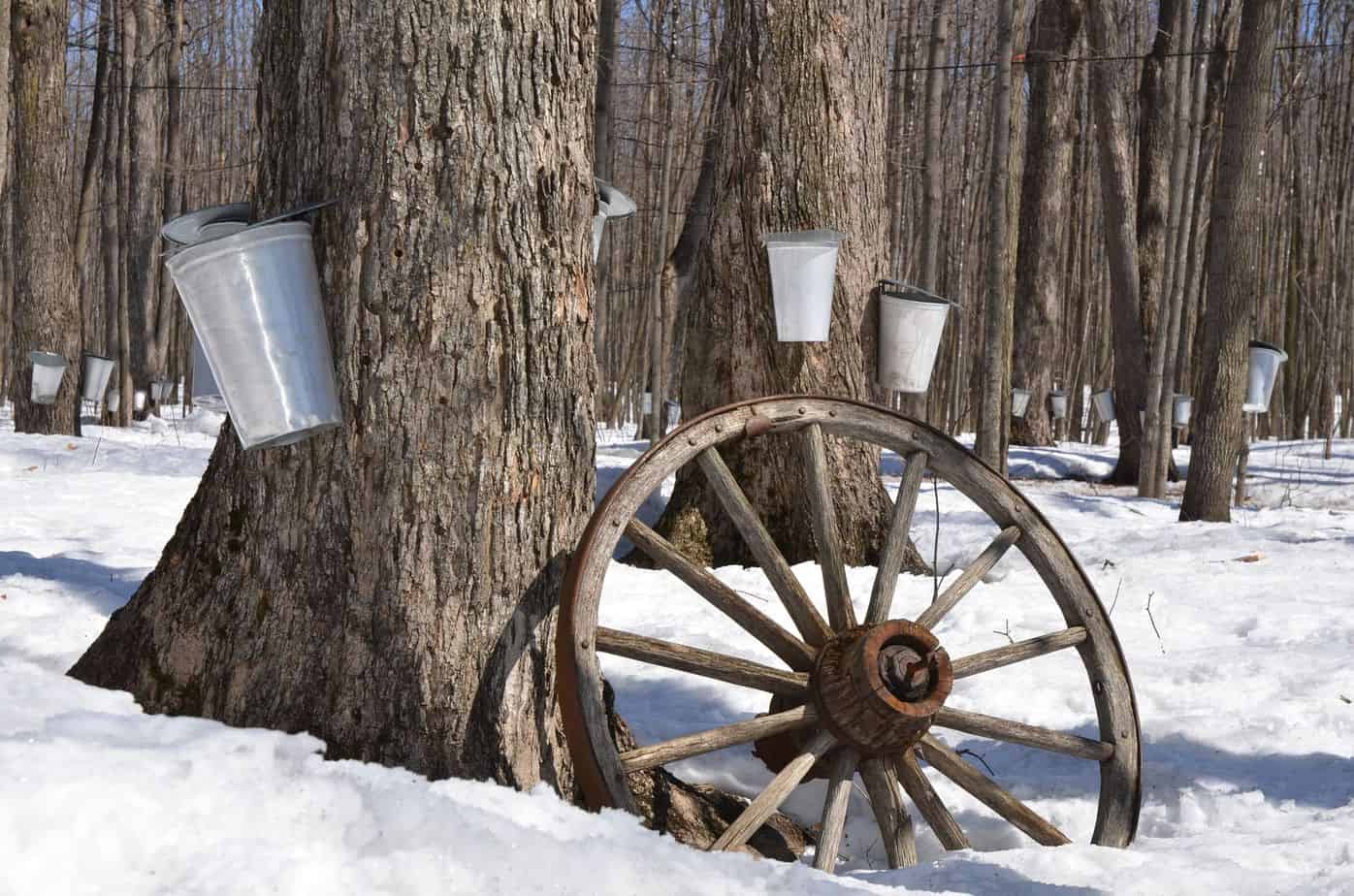 The abundance of the maple tree (sugar, syrup, etc.) has been used for what seems an eternity. My Native American ancestors tapped these trees long before the first Europeans set foot on this land, but once they arrived, these early pioneers soon learned the value of maple syrup.

From then on, maple sugaring has been a staple skill of the Northeast, and anywhere else, sugar maple trees grow. In time, this craft has become a big business and a reliable source of income for some. However, with a little work and some simple tools, you can harvest your own maple syrup at a fraction of the cost of commercially processed syrup.

While commercial sugaring operations tap acres and acres of trees, your aim is to find just enough trees to obtain a good quantity of sap. If you are looking to produce syrup for your family tapping 10-12 trees or even fewer is all that you need. Though all maples and birches can be tapped, it’s the sap of the sugar maple that’s in most demand.

As the name implies, sugar maple sap has the highest sugar content and produces the finest syrup. I like to combine old and new ways of maple sugaring to produce maple syrup for my family each year. With the season just a few months away, now is the time to plan your course of action. 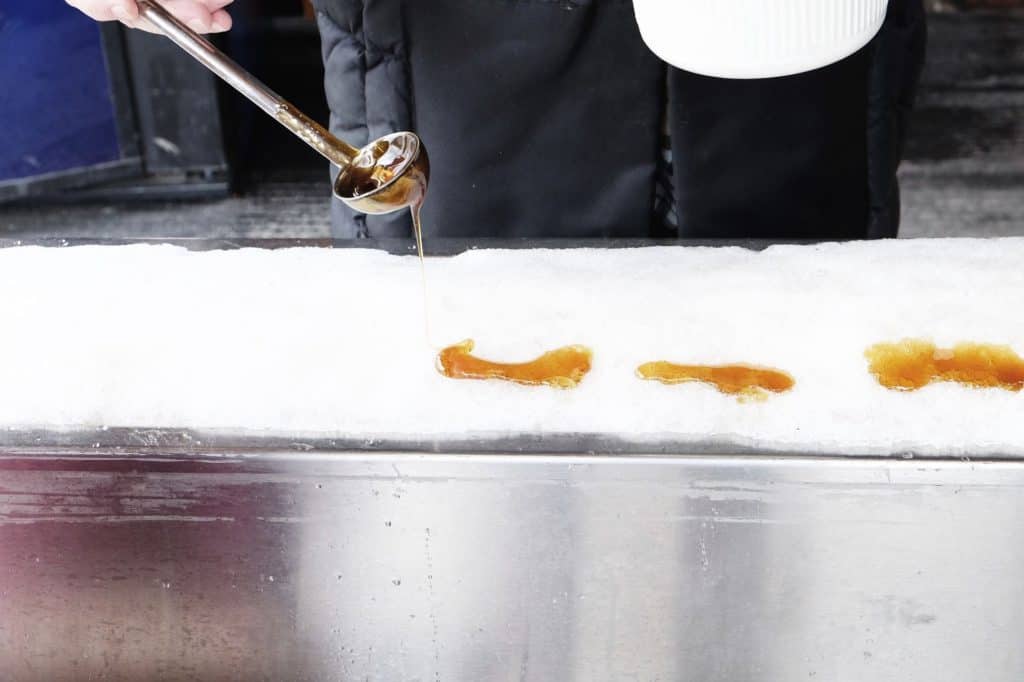 Years ago, before starting my quest for maple syrup, I did my homework. I started by visiting old farms and historical societies to learn more about the old ways. I then continued by visiting modern maple-sugaring operations to learn modern methods. With all the information I managed to gather in hand, I moved forward. Before I began my own operation to obtain maple syrup, I also considered the costs of doing so.

Those that are in it for the money are now using miles of plastic hose to bring the sap back to the sugar house where it’s boiled down. I wanted to cut down my costs and do things the old way using metal taps and buckets.

I rushed to the nearest supply store and found that metal taps, just like those used before plastic tubing cost $4-$8 each, and galvanized buckets without a cover cost $20 each. Being the cheap bastard that I am, I decided to make my own gear.

I purchased an 8-foot length of metal electrical conduit for $3 since I couldn’t find any in the scrap yard nearby. Then I collected plastic 1-gallon and ½ -gallon milk and water jugs to use instead of metal buckets. For $5, I bought 3 feet of ¾ -inch plastic hose to run from my taps to the jugs. For a grand total of $8, I was all set to create my sugaring equipment.

Using a hacksaw, I cut ten pieces, 3 ½ -inches long, from the length of conduit. After that, I cut a 1 ½-inch notch to form the area where the sap would run into the plastic tubing and into the jug. And last, I cut another 1-inch notch at the other end of the conduit. I crimped that end of the conduit to approximately 3/8-inch diameter, which is the size of the hole I made in the tree. 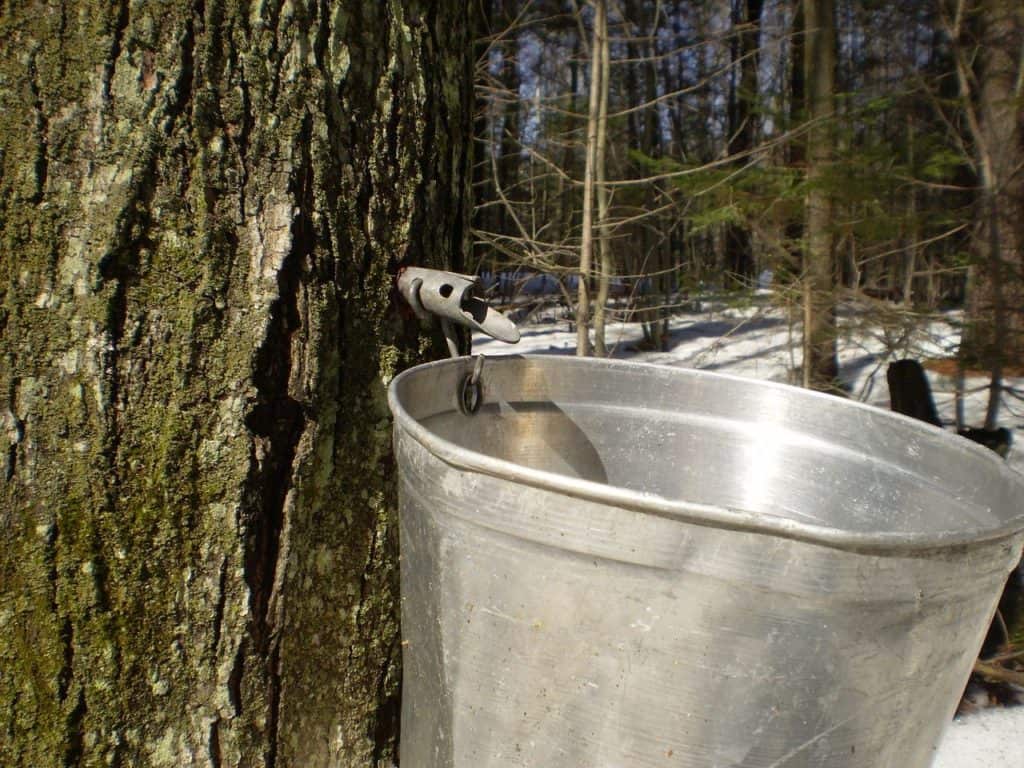 Finally, I drilled a hole in the tap, so I could run a piece of wire through it to secure the jug to the tap. The wire I’ve used was some leftover electrical cable that I had lying around, so I didn’t have to worry about increasing my budget.

Though we have quite a few maples on our property, my neighbor has some huge sugar maples. I went and asked for permission to tap his trees. After discussing a little about my intentions, he gave me the OK in exchange for a percentage of whatever I took. I first made ten taps, but later I decided to use only six, which was plenty. Besides, I had only seven jugs. I used the seventh jug to collect sap and carry it to a basin where I stored it prior to boiling.

Originally, I wanted to do this like back in the old days—drilling the holes with a nonelectrical, hand-powered drill. However, I gave up that idea since it took too much time, and I was anxious to see the sap flowing. I got my electric drill with a 3/8-inch bit instead, and I drilled holes at an upward angle and only drilled into the soft, white outer wood.

The upward angle harnesses the power of gravity to assist the flow of sap into the jug. Once the hole was drilled, I used a rubber mallet to insert the tap. I ran a wire through the hole in the tap to fix a jug in place. Before I placed the jug, though, I put about 6 inches of ¾ -inch plastic tubing onto the tap, which fit perfectly, and then into the opening in the jug.

With everything in place for the first tree, I moved to the next one and repeated the steps. I did so until I had all my jugs in place.

To my surprise, the trees were producing sap quickly, and within an hour or so, I already had to empty the jugs. One thing I didn’t think through is that those that run commercial operators have large holding tanks. Me, on the other hand, I didn’t. I had to figure something out and find some containers that could hold all the sap. Being in a hurry, I grabbed one of my many coolers, lined it with a clean plastic bag, and started dumping the sap into it. As the cooler began to fill up, I started boiling.

Once again, I wanted to do things as old school as possible. I grabbed my propane camp stove and a propane bottle and fired up the stove. Placing my Lodge 5-quart, cast-iron Dutch oven onto the stove, I filled it up with sap and started boiling.

If you plan to do the same, I have to warn you that even though cast iron transfers heat quickly, it still takes a long time to boil down the sap. As time was passing by, I gathered so much sap that I also had to get a 6-quart pot from the kitchen just to be able to keep up.

You should know that the amount of boiling required depends on how much you want to concentrate the sap’s sugar content. The sap is about 90% water, and according to my research, I found it takes approximately 35-40 gallons of sap to make 1 gallon of syrup.

There is a real science to this process, but I based my boiling time on color and thickness. The sap starts out clear, like water at first, but as it boils down, it darkens. As you continue boiling it, the more water will evaporate, and the same becomes darker. You must use caution during this process because if you boil it down too much, the sugar will burn on the bottom of the pan and ruin your syrup. 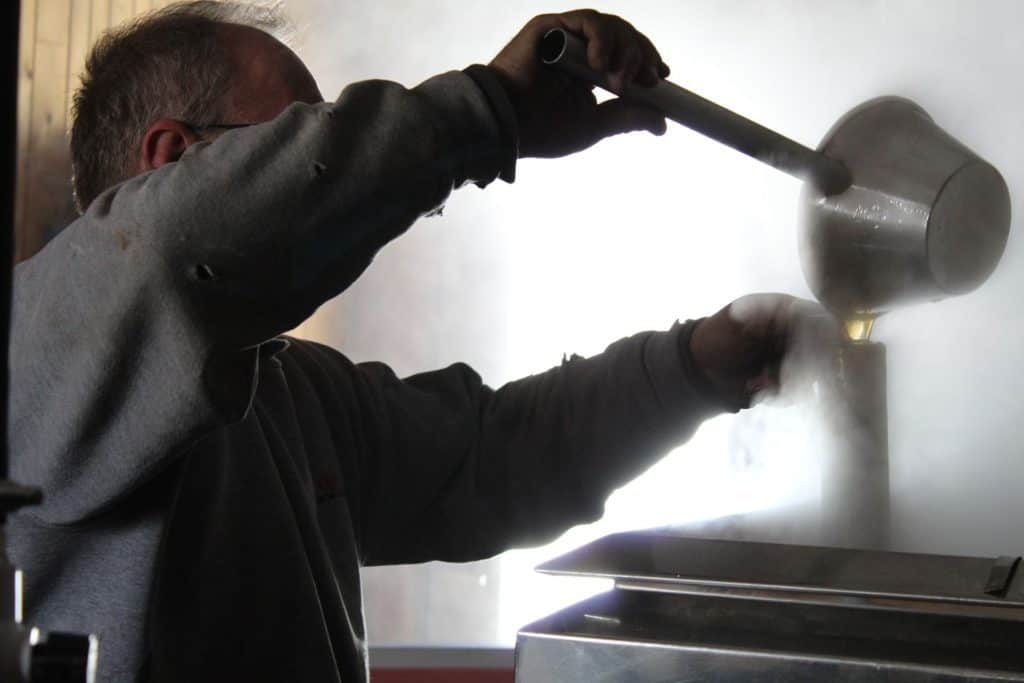 After the boiling process is complete, you need to bottle the syrup. You can easily put it in one large container for your own use. However, try to think like our ancestors and how they manage to use this valuable resource. That being said, I bottled my syrup in 12-ounce containers that I’d thoroughly cleaned and then saved.

You could also use Mason jars if you have them. I bottled the syrup so that I could proudly trade a bottle here and there for other items.

Tip: Whether you cover your sap buckets or not, there’ll always be a small amount of debris in the bottom of your pan. Before bottling, I recommend you strain your syrup through a cheesecloth. Some people use coffee filters for this operation, and even if they work, I believe using cheesecloth is better. It costs you just a couple of dollars, but it’s a worthwhile investment.

If you plan to sell or trade your maple syrup, this filtering is recommended. It allows you to keep as much of the debris out of your bottled syrup as possible and make it look more “commercial.”

😁 My ancestors would be proud

Despite what some people believe, and perhaps due to their lack of knowledge, some people are reticent when it comes to obtaining their own maple syrup. However, with a little hard work and creative thinking, you can gather sap and produce your own.

Although I always try to do things the old ways to keep the legacy of my ancestors alive and to teach my kids a little bit of history, you can combine both the old and the new. You will have the best results while discovering how they used to do it back in the day. You will be merging pioneer frugalness with modern technology to obtain maple syrup for your family or if you want to make some extra cash.

1 thought on “The Art Of Making Maple Syrup”