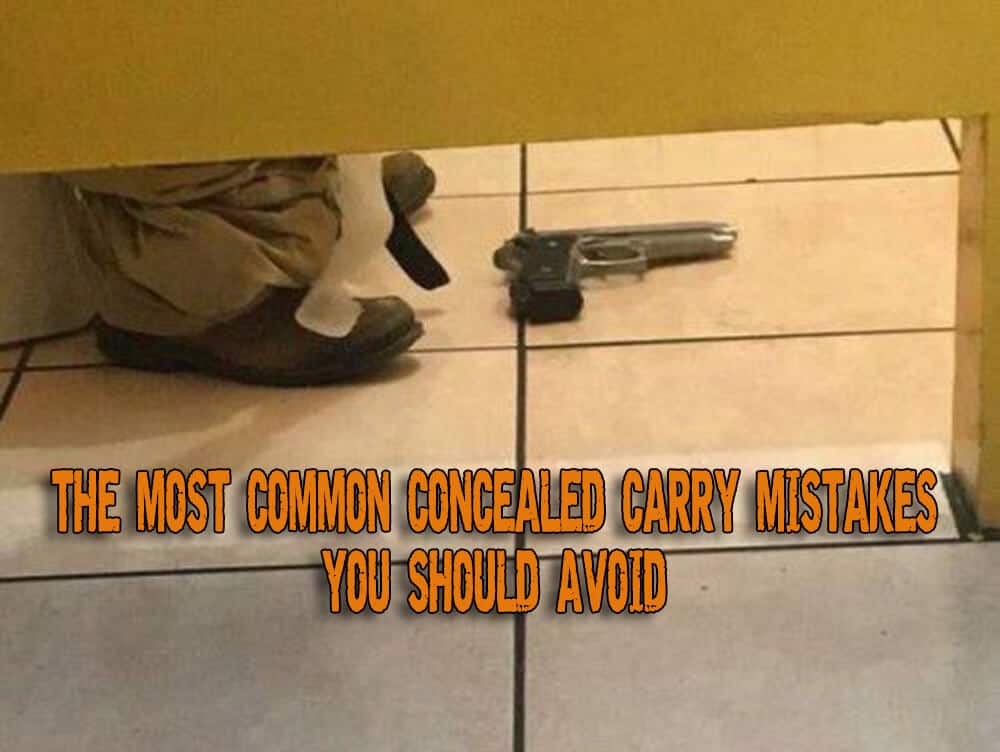 The temptation grows every year with the cool gear that comes out and we end up getting more than we need. If you want to start carrying concealed there are a few things you should begin with. Be honest with yourself about your needs, learn to make educated decisions and avoid the following concealed carry mistakes.

Some people think that going to a concealed carry course that covers the basics and after receiving their certificate the topic is closed. In fact, learning about concealed carry weapon, about the rules that must be followed and various scenarios you could find yourself in is an ongoing process.

The training you take part should concentrate and reflect your reality as a civilian carrying a concealed handgun. You will need to pick the right gun for you even though sometimes that means making compromises and sacrificing capacity, accuracy or stopping power. Even more, you should stay away from temptations and pick only the right gear for your handgun, the one you actually need. And last but not least, it’s all about how you use your head first and making sure you avoid some concealed carry mistakes that seem to have become a pattern. One of the most common concealed carry mistakes that we all make at some point is wearing revealing clothing. You may be fit and want to show off your biceps, but that’s not the proper attitude when CCW. Wearing clothes that are too tight on your waist will create a perfect print of your handgun. Even more, if you wear clothes with a shortened hem, you will reveal your handgun when reaching for things over your head.

The whole point of concealed carry is to carry a gun undetected and have the element of surprise. With this in mind, you should dress accordingly to maximize your advantage. The clothing you choose should help you blend in, and nobody should suspect that you are carrying.

You want to make sure your gun is still where you put it when you reach out for it. However, a bad combination of clothing and holsters can provide a mini-heart attack when reaching for and not getting it. The holster you chose should completely conceal your handgun. Even more, you should be able to smoothly and effectively draw your gun from that holster.

Finding the proper holster for your handgun can be tricky. It requires quite some research and trial before picking the one that works best. Nowadays, people go on the internet to make their purchase and if they read a handful of good reviews, they will click the buy button. Rather than ending up with more holsters than you need, try before you buy it. You need to pick the right holster for both your handgun and your body type.

Even more, one of the most common concealed carry mistakes is not practicing with the holster you just bought. You should do various drawing and holstering drills from different stances to make sure you have the right piece of gear.

What does this have to do with concealed carry you may ask? Well, you’ll be surprised to find out that this is one of the concealed carry mistakes that happens all the time. People go in the bathroom stall, they drop their drawers, and that’s pretty much it. They do not pay attention where their inside the waistband holster goes.

Some people end up losing their gun because they are too distracted while others leave it in the stall, after carefully removing it from their waistband. Pay attention to your handgun no matter where you are, especially if you’re in a vulnerable position.

Making awkward movements is another one of those concealed carry mistakes that will let everyone know you are carrying. Some people bend at the knees instead of the waist to prevent printing and that makes sense. It doesn’t look awkward and it doesn’t raise any suspicions.

However, walking like a robot with stiff and short moves will tell people around you that something isn’t right. Before you go out with your CCW, you should walk around the house and do some basic movements just to make sure you can move freely. If something doesn’t feel right, you should change your clothes or your holster. Even more, you can bend or stretch to check for printing signs. Rather than acting wired in public and creating unnecessary tension, you should check your clothes and gear before leaving home.

There are some people out there that confuse the principle of concealed carry. They think that if they have a concealed carry badge, they can flaunt it around or make an arrest. This is something that has to do with the “Superman complex” and people think that they can save everyone, they can do justice no matter what.

Use your brain and avoid making a target of yourself. For example, if you’re at a gas station and you notice an armed robbery attempt, you might feel the need to do something about it. I advise you to double check that instinct before you take matters into your own hands. First of all, you can’t solve other people’s problems. And second, your concealed carry is to protect you and not to enforce the law.

One of the most common concealed carry mistakes is carrying a gun that’s not designed with concealed capabilities in mind. People go for a large caliber and they often don’t stop and think about what is actually necessary.

Even more, some of them go for all sort of accessories that can hang off their pistol and they end up with a bulky handgun. A concealed carry weapon that creates a larger footprint, no matter what they wear or how they move.

This is another psychological factor and it occurs when people are fearful. They go for “bigger and better” and all sorts of backup just to be on the safe side. Rather than doing this, people should train and learn how to act in various life-threatening scenarios. It will help them gain some confidence and discipline and they will realize that carrying a gun doesn’t make them invulnerable.

7. Going where you’re not supposed to

When it comes to concealed carry mistakes, people make this one on purpose. They take their CCW with them everywhere they go, including in gun free zones. If you’re lucky enough to live in an area with a low crime rate and well-established communities, you might not need to carry it with you. In fact, whether or not to carry your concealed weapon depends on where you are going.

However, criminals do not respect the gun free zones, and they won’t stay away from places where guns are prohibited. As far as concealed carry goes, if you believe a place is not safe, you should avoid it all together if possible. When that’s not possible and trouble arises, my honest opinion is the criminal should not be the only one who is armed.

8. Learning to shoot from difficult positions

This is another one of the concealed carry mistakes that could get you in trouble or worse. When you carry a weapon, you should learn to shoot it from various positions, especially the difficult ones. Learning to shoot for the underhook hug will prevent your opponent from feeling and reaching your handgun attached to your waist.

If you start this journey, it’s better to commit to it and keep your head in the game. You need to train regularly if you want to improve your skills and you need to try a shooting position that makes you uncomfortable. I have found that much of the experience I’ve gained in shooting drills from various shooting schools does influence how I react in daily interactions and travel.

As a general rule, I can say that concealed carry requires a lot of common sense, a proper mindset, and a carrying etiquette. Some of the concealed carry mistakes listed in this article are a common occurrence for some and they have developed into a bad habit.

When it comes to concealed carry there are some rules you need to follow and there’s no workaround for them. When using your concealed carry without a justified reason, you could face civil and criminal liability. Even more, when you are in the right, there is still the risk of being arrested, indicted or sued in civil court.

How To Start A Fire Using Your Pee

This Bug Will Kill Most Americans During The Next Crisis