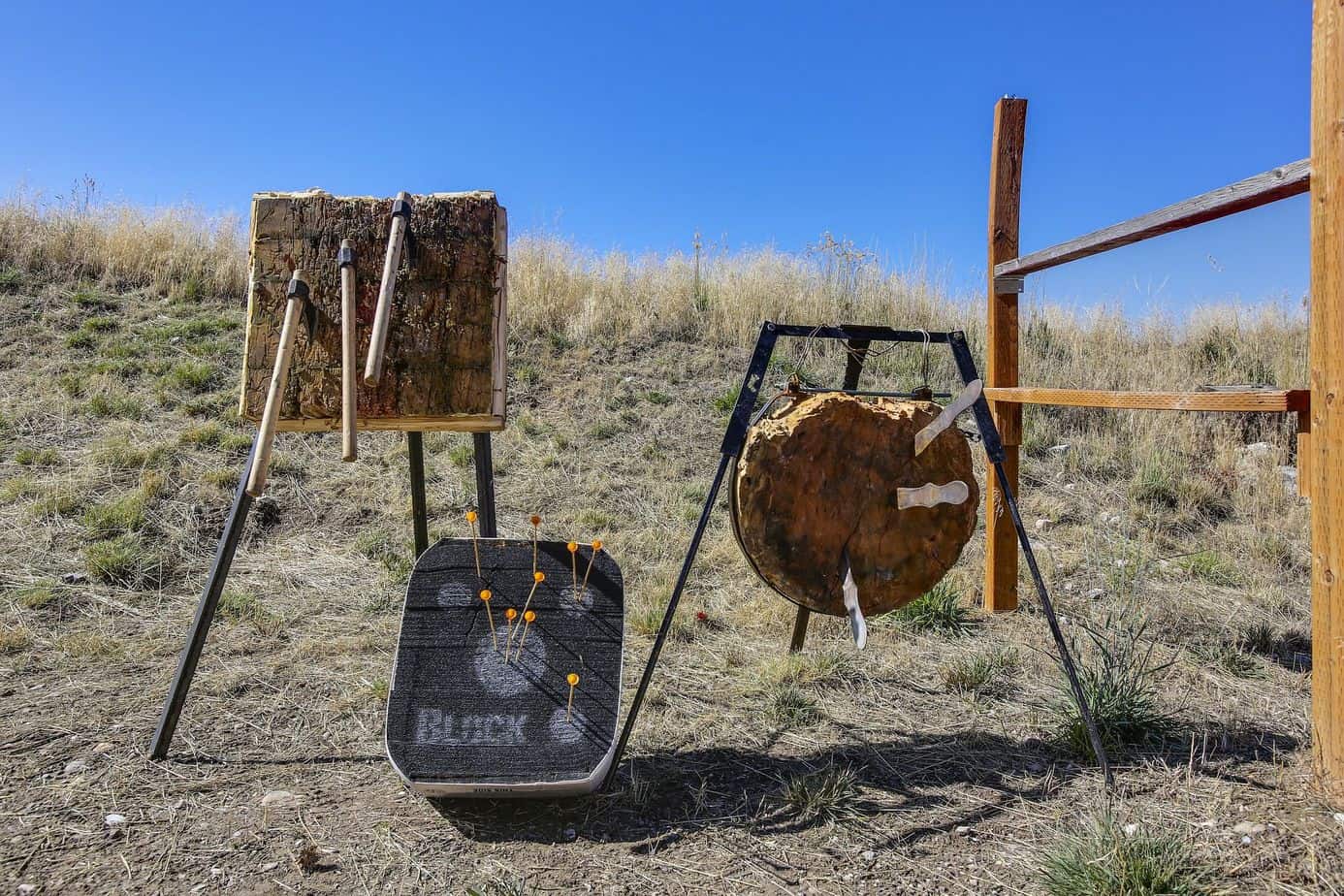 The fast-growing twin sports of knife and tomahawk throwing began some years after the end of World War II as a revival of the sporting activities on the American frontiers of a century or more ago.

As competitive sports, much credit for the current popularity of knife and tomahawk throwing belongs to the many black powder muzzleloading organizations that have sprung up all over the United States and Canada.

👨 The man, the legend

These twin sports have been an important part of muzzleloading activities since the 1960s. For instance, the first of such contests in the state of Michigan was conducted in 1962 by a group of black powder enthusiasts in Manistee, where the knife throwing competition was won by Harry K. McEvoy of Grand Rapids, and the tomahawk contest by John Schippers of Wyoming, Mich. This particular “Forest Skirmish” black powder invitational shoot was a milestone in the association of these twin sports with the fascinating revival of interest in the frontier activities of our ancestors.

Much of what is now a world-wide interest in knife throwing especially, can be traced to the post-war activities of former WWII army Air Force Sargent  Harry K. McEvoy, of GrandRapids, Mich., (mentioned above) who is today, often called “the father of modern sport knife throwing” and “the throwing knife king of America.”

In August of 1944, while stationed in an Air Force detachment at the old U.S. Rubber Co. plant in Detroit, he learned the rudiments of the art of knife crafting from the company’s metallurgist and blacksmith, and under the supervision of these two experts, McEvoy made his first throwing knife. It was jokingly called: “a Government job!”

Since then, over a period of some four decades, he has designed and produced more than 30,000 throwing knives in some 25 models, all hand-made after initial shaping by various means. Educated in journalism at the University of Illinois, he has been a freelance newsman and feature writer for most of his life in addition to a 30-year career in sales work. Of the ten published books and booklets produced by Harry McEvoy, a total of eight cover the arts of either knife throwing, tomahawk throwing, or both.

He has also written a vast number of magazine articles on these subjects, and his goal has always been to bring information and proper throwing equipment to two generations of knife throwing and tomahawk throwing enthusiasts. He was also a long time member and Fellow of the prestigious Company of Military Historians of Washington, D.C.

In the spring of 1990, his videotape, titled Knife & Tomahawk Throwing for Backyard Recreation, became available to fellow enthusiasts of every nation and climate and of special interest to folks interested in survival techniques. 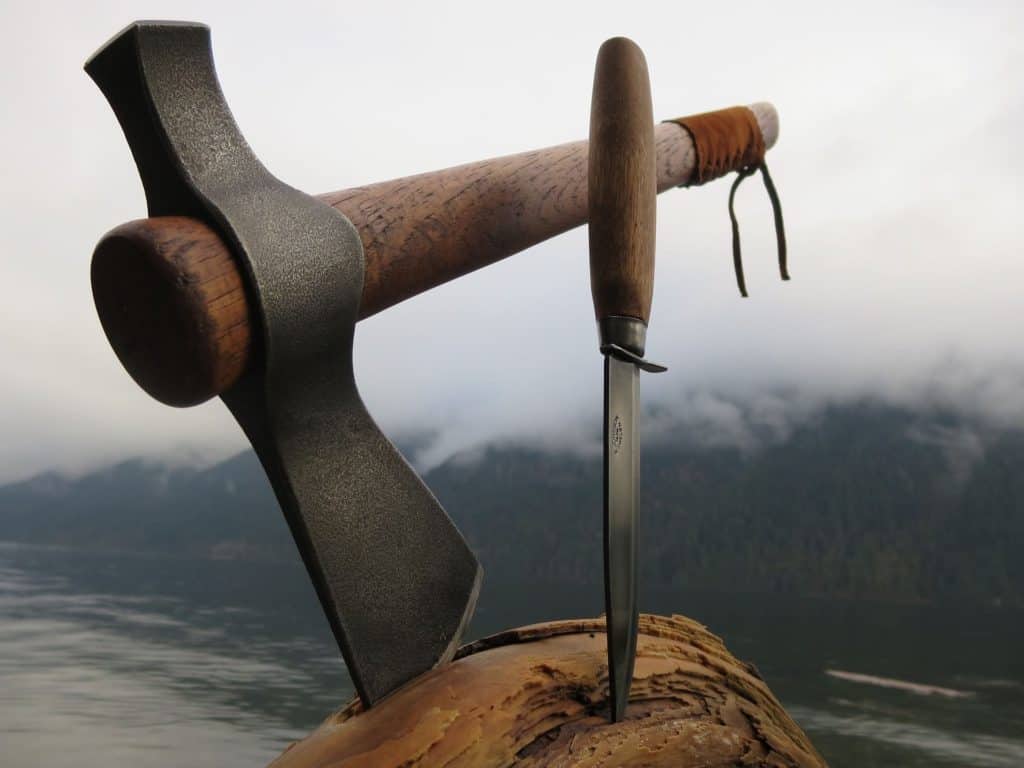 As far back as 1945, McEvoy discovered — mostly by trial and error, to be sure — the basics of proper throwing knife design. Over the years that have followed, these basics have been published many times in his writings and are accepted as the true basics of proper knife and tomahawk design.

His patterns have been copied by knife crafters and manufacturers in a number of countries and thus testify to the accuracy of his designs for the type of throwing involved.

So if you plan to get involved in knife throwing, here are these basics to consider:

If it balanced at the exact overall center or up to one inch back of center and has a light handle but a heavy blade, that knife is best thrown by the handle grip for even spins — one, two, or three complete turns. If the balancing point is near the hilt — that area where the blade and handle join, the knife would best be thrown by the blade grip. (You have to always grip the light end and throw the heavy end first.)

If the knife balances at exact overall center and there are no sharp edges to cut the hand, the weapon can be thrown by either handle or blade. True professional knives, as used by the “pros” in their acts, are usually center balanced. Sharp, double-edged knives should not be thrown, except by the handle. 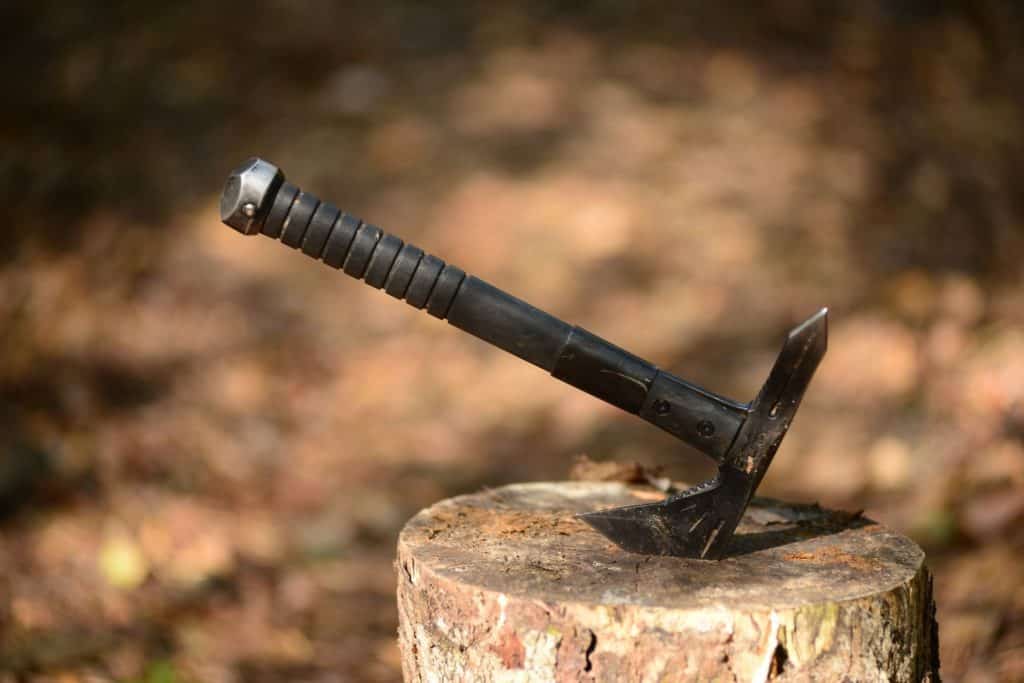 As for tomahawk throwing, McEvoy has recommended through videotapes and his books and articles on the subject that certain basic features be present if the tomahawk is properly designed for throwing.  I recommend his book Knife & Tomahawk Throwing: The Art of the Experts for more tips.

These basics are as follows:

In both of the twin sports, the thrower should stand about 15 feet back from the vertical face of the target and make an overhand practice throw. Harry McEvoy also recommends that you stand in a sort of flat-footed half-crouch — a boxer’s stance is similar — with left foot forward (if you are right-handed, and the reverse if you are left-handed.) You then wind up and make the throw with arm and shoulder doing most of the body movement.

The knife is released like it is hot, with no wrist snap, when your shoulder and the point of the knife are in one straight line and when you instinctively know you are lined up with your mark. This applies to either throw —by handle grip or blade grip — with only the distance to the target changed to allow for even spins or the one and one-half spins by the blade grip.

You will have to experiment a bit to adjust your distance so as to achieve a perfect stick with each throw. If the knife hits flat with the point up, you will need to go back a foot or so, and if it hits point down, you move a bit closer to the target.

When you find the exact distance to stand for a perfect throw, you should mark the spot, with a stake, dig a hole for your foot, but be sure to stand on that same spot each time you throw. The distance is always measured from the target to the back foot. The knife is always thrown hard and fast. With the tomahawk, it is not necessary to throw hard, since the weight and balance of the hawk does the work for you, once it is properly in motion.

The overhand throw with knife and tomahawk is the basic way to throw these two great instruments and give the thrower the most power, velocity, and accuracy. And if you are ever in a survival situation where a thrown knife or tomahawk can hopefully ensure that survival, the basics of both weapons, just described, could make a big difference in the life or death of yourself or a loved one.

Also, many varieties of both small and big game have been successfully taken with knives and tomahawks, and an experienced hunter with bow or gun, who is also familiar with the basics of stalking game animals can possibly fill his larder from time to time by a skillfully thrown knife or hawk.

Good throwing. Observe sensible rules of safety at all times, and enjoy two of the most enjoyable recreational sports to be found anywhere!