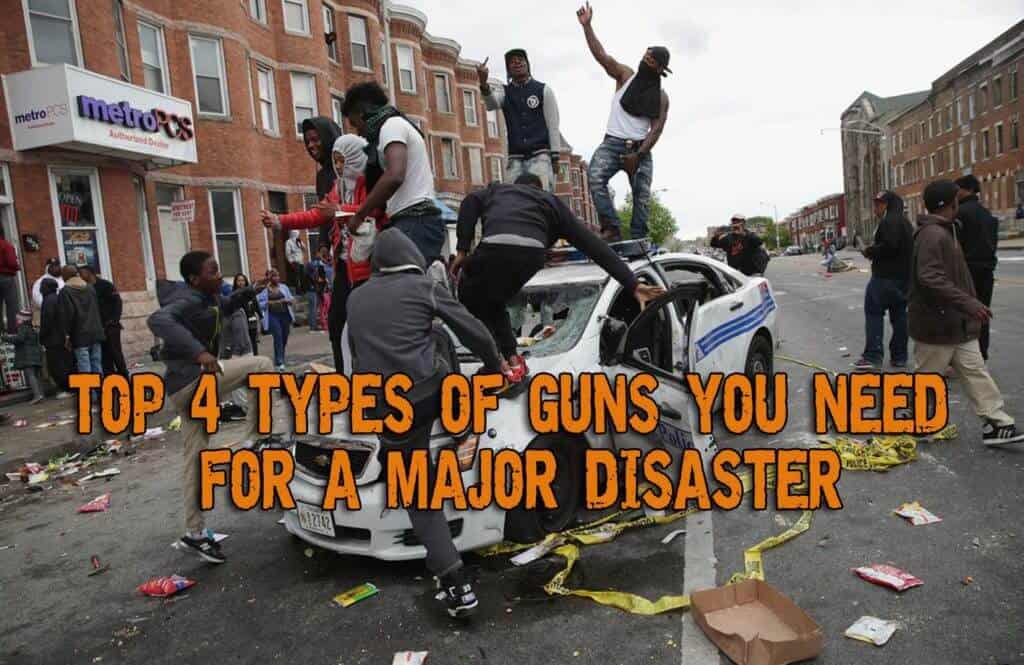 One of your top priorities in any major disaster needs to be security and protecting your home and your family, and that means that you need to have the proper weaponry to give you the capability to keep them safe.

Regardless of whether it’s an EMP attack, a grid down, an economic collapse, a natural disaster, or rioting that envelops an entire city, you need to have the necessary tools to defend yourself, your family, and your property against those who would seek to harm you.

That being said, not all guns are equal.  Some are better suited for self-defense or for hunting than others.  At the same time, you also want your personal armory to be ‘well-rounded’ as well, in the sense that you’ll have the ability to perform many different tasks based on the guns that you have.

If you agree that you need to put together an armory of firearms but don’t know where to start, the information you’re about to read should be of help to you.

Here are the top four guns you need in your arsenal to prepare for a major disaster: A defensive handgun is arguably the single most important firearm to have in your arsenal.  Some would disagree and counter-argue that the most important gun to have is a shotgun (more on this in the next section), but a handgun provides you with one very distinct advantage that no long gun really can: it can be easily concealed on your person.

This is an invaluable asset, especially in certain situations in a major grid down major disaster where you won’t want to reveal that you are armed since you also won’t want to attract unnecessary attention to yourself.

Another advantage to a handgun is the fact that it’s so easily accessible.  You can keep it strapped to your hip at all times to quickly respond to a life-threatening situation, whereas with a rifle or shotgun you would need to run into your home or your car to get to it first (and by then, it might be too late).

The best kind of pistol to have in a major disaster situation will be a mid-sized 9mm pistol with a large magazine capacity (12 rounds at least).  9mm is the cheapest and most plentiful pistol caliber in existence so that you can accumulate lots of it and it will be the easiest to find after the grid has gone down as well.

Furthermore, a mid-sized pistol will be both large enough for you to fight with and compact enough for you to conceal carry comfortably.  A larger capacity of at least 12 rounds is also vastly preferable for defending yourself against multiple attackers at once (keep in mind that you may miss or have to shoot an attacker more than once).

As was noted previously, many people would wholeheartedly argue that a shotgun is a more important firearm to have in the arsenal than a handgun.

It’s easy to see why: shotguns are incredibly versatile and practical.  In fact, they can really be used for literally any purpose with the exceptions of concealed carry and long distance shooting.

The reason why is because of the ammunition.  When loaded with buckshot, a shotgun is one of the most effective home defense weapons available to you.  With birdshot, it’s a superb choice for small game hunting and especially for birds (not to mention clay pigeon shooting).  And when loaded with slugs, a shotgun can also be used for big game hunting, as long as it’s within reasonable distances.

The best kind of shotgun to get will be a 12 gauge or 20 gauge pump action.  Both calibers are incredibly effective for home defense, but the 20 gauge will be a better choice for women and smaller statured shooters because it produces significantly less recoil.

A pump action will also be preferable over a semi-automatic because pump actions are well known for feeding reliably literally any ammunition that you put through them (not to mention they’re also cheaper).

The two best pump action shotguns to go with will be the Mossberg 500 and Remington 870.  Both have been around for decades, are incredibly popular with well-deserved reputations, and have an abundance of aftermarket parts and accessories available on the market.

You can also go with models of either that provide you with both a short and long barrel that can be swapped out in a matter of seconds, making for a very versatile weapon.

A semi-automatic rifle in an intermediate caliber such as 5.56x45mm NATO will also be an invaluable firearm to have in your arsenal.

Many people don’t think of semi-auto rifles such as the AR-15 as being decent choices for self or home defense, but the truth is that they are incredibly well-suited for the task.

There are many reasons why.  Recoil with the AR-15 is very minimal, so fast and accurate follow-up shots is easy (with enough training, of course).  The range is superior than either a handgun or a shotgun (making it a better option for property defense), and the AR also produces significantly greater stopping power and velocity than a handgun.

That’s all not to mention the fact that you have a large magazine capacity with an AR (20-30 rounds), so needing to reload most likely won’t be an issue in most defensive situations.

All in all, the AR-15 is an excellent rifle to use for self, home, and property defense.  It’s accurate, it’s reliable, and it’s ergonomic.

There’s also a big misconception that AR-15s are incredibly expensive and out of the price ranges of most people.  This used to be true, but today there are a number of budget priced and yet high-quality AR-15s for you to choose from, priced at around the $500 mark.

The best choice for an AR-15 would be either the Ruger AR-556 or Smith & Wesson M&P15 Sport II, both of which have built solid reputations for being high-quality AR-15 carbines and sold at very fair prices.

Last but not least, you’ll need a rifle that is capable of accurately tapping targets at long distances and bringing down big game to put meat on the table. There will be a lot of competition during a major disaster and you won’t be able to keep up witouth a proper rifle.

While there are many different calibers for you to choose from here, the .308 Winchester round is the most popular centerfire rifle caliber in the world, and subsequently is very fairly priced and affordable.  It’s also a highly versatile caliber that only produces moderate recoil while also being capable of bringing down anything in North America.

As far as specific rifles are concerned, you also have a wide variety of different options.  If you’re willing to pay a premium price (as in around a grand total), the Winchester Model 70, Remington Model 700, and Ruger Model 77 Hawkeye are among the highest quality rifles on the market.

If a thousand dollars is too high of a price for you, however, you’ll be glad to hear that as with the AR-15s there are a number of high-quality bolt action hunting rifles sold at or below the $500 mark as well.

Popular examples of these kinds of rifles include the Savage Axis, Mossberg Patriot, and the Ruger American.  You can also often purchase these rifles as a ‘combo’ meaning they come with both the rifle and a scope already installed on the rifle.  All you’ll need to do is sight in the scope on the range, and you’ll be all set.

All in all, the four types of guns that we have covered in this article will be the most important ones for you to have in your arsenal as preparation for a major disaster or SHTF situation.

As one final piece of advice, it’s vitally important to train extensively with each firearm that you have in your personal armory so you can become proficient with it in case a major disaster occurs.

In other words, it’s more important to invest your time and your money into training than it is into buying more guns.  If it’s between having two guns or one gun and a big pile of ammo with it for you to train on the range with, definitely go with the latter option.

But still, if you have the money, it’s definitely a good idea to put together a well-rounded personal armory that can fulfill a wide variety of different roles, and that means you’ll want to own as many of the above types of firearms as possible.