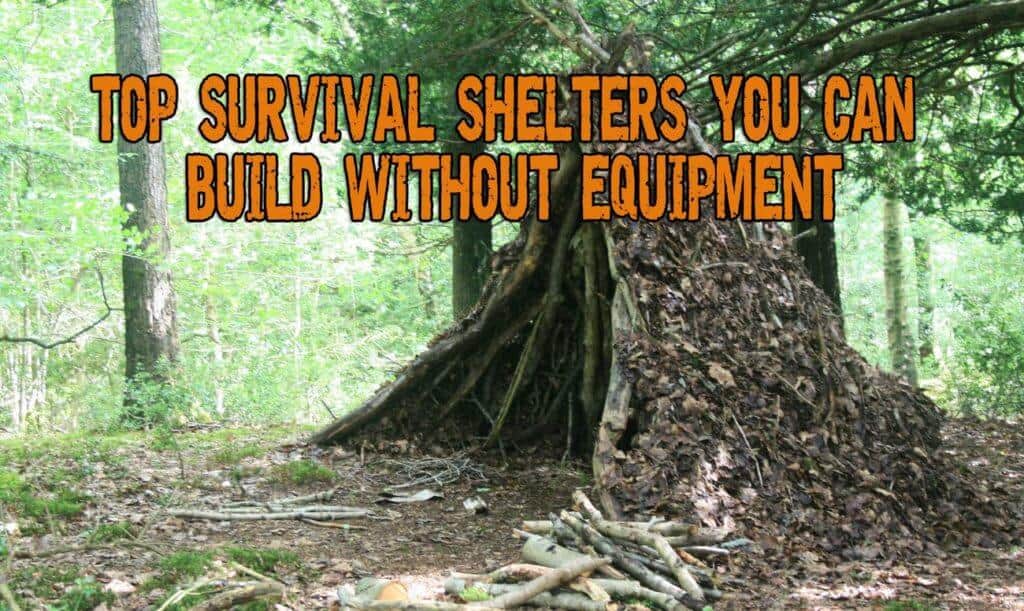 If you find yourself stranded in the wilderness in a survival emergency, do not panic. Do not wander too far from your last known location to greater increase the probability search and rescue will be able to find you. The first and foremost priority over anything else, including food and water, is shelter.

Shelter is the most important priority because, without it, the elements can kill you within a matter of hours, where thirst and starvation will do their worst in days to weeks, so the number one objective is to build a shelter.

The odds are most of you aren’t survival experts, but the good news is you can build a variety of shelters fairly quickly with little to no experience and with the resources you either have on hand, or you can find in the wildness.

Keeping this in mind, let’s go over some of the top survival shelters you can build without essential survival equipment.

Considerations Before Building A Shelter

Before selecting a type of shelter to build, you must take a few factors into account before getting to work, your life may depend on it.

Consider the weather conditions you will be facing in the duration of the time you’ll be out in the wilderness. Weather is notoriously unpredictable and conditions can and probably will change very rapidly, so stay dynamic when choosing a site to build.

If you’re in the Arctic, cold kills, you will need a shelter that can keep you warm yet is stable enough not to collapse on you when subjected to the heat of the fire or even the increase in temperatures from your body heat. Just make sure you’re near sources of fuel and water so you can keep a fire going to melt water and for warmth.

Wind is always an issue, so make sure you have a shelter that provides a barrier for you from the wind.

Ideally, a natural shelter such as a cave or rocky overhang, but understand these options may not always be available, so having a solid basis of shelter building will ensure that the odds are stacked in your favor regardless of the circumstances you may find yourself in. Remember Murphy’s Law: Anything that can happen, will happen.

Now the basics have been covered, you know you need protection from the elements, be near sources of water, food, and fuel, and to stay in the prefix of your last known location.

And while you should always strive to have critically important survival tools with you when you’re out in the wilderness, it’s also important to know how to build specific types of shelters without such tools at your disposal, including the following types of shelters:

The round lodge shelter is one of the most simple shelters you can construct in a pinch without any equipment other than what mother nature provides.

It is built much like a Native American tipi, in a triangular cone shape that provides adequate protection from the elements but offers you the ability to build a small fire within the walls of the shelter.

To get started, collect as many five to eight foot long branches and tree limbs you can find, see if you can find a form of thatching such as grass so you can tie the limbs together if not, physics can account for it.

Next, carefully stack the limbs in a triangular cone that come together at the top, you may consider digging out the base of the shelter so you can reinforce the base.

Once the shelter starts to come together, horizontally place a few limbs together a few feet off the ground to provide a doorway in the shelter walls.

For added weather protection, you can add leaf litter or any type of canopy to the walls to insulate the shelter and keep the elements out.

The leaf hut is a simple small shelter you can throw together in a hurry when adequate insulation and protection from the weather is vital.

To start, search for a solid eight to 12-foot pole, a natural V shape fork such as a small tree, rock formation, or stump. If you can’t find a natural fork, you can build one with two smaller sticks.

Next, collect some shorter limbs or sticks to act as the shelter walls. Stack them vertically along the walls of the shelter to act as “ribs”, just keep in mind to stack them close enough, so your wall covering won’t seep through the walls, nor let the weather in or let the heat out.

Pile as much vegetation such as leaves, small trees, moss, pine needles on to the walls, about three feet on each side is the magic number for adequate insulation. If you find yourself in high winds, use sticks, twigs, or branches on top of the vegetation to keep it from being ripped away by the winds.

The lean-to is one of the most widely used, yet simple shelters you can construct in situations where seconds count. Lean-tos can be built with almost anything you can think of and take no more than an hour to 90 minutes to build.

To start, see if you can find two natural pillars close enough together to place a support pole across. Once that’s secure, stack sturdy limbs from the ground to the support strut and build a one-sided roof. Once that’s done, throw on as much vegetation as you can, intertwined between the poles.

Keep in mind the lean-to will only protect you from the wind if it continuously blows from one direction, nor does it retain heat very well, but it’s a quick and easy shelter to build if you need it.

Suggested reading: Planning A Shelter In The Wild

Snow caves may be the only shelter available if you find yourself stranded in arctic conditions, but keep in mind, it’s dangerous if build incorrectly and could collapse due to the conditions above in the previous section.

If you can, build your shelter above ground instead of digging into the snow, as shelter built above ground will be pronounced which will increase the chances of being spotted by search and rescue teams.

It may seem like you will need a number of tools to build this, but Eskimos prove that all you need is a knife and some wit.

The best location for snow caves are to build into a solid and sturdy snowbank. Once you have found a suitable location, dig to the immediate left of it, this will channel the cold air down into the hole and will solidify the structure and keep the cold at bay.

The next and most important step is building the snow dome that encapsulates the platforms you built.

Since there will be a small fire and you want to prevent the risk of the roof collapsing, cut into the snowbank and form a smooth dome. Domes are one of the most structurally stable shapes you can build, so it’s ideal for shelters like this.

You don’t want a large fire anyway due to the chances of the cave melting and suffocation, so two to three feet in height is ideal. Once the dome is shaped, cut a ventilation port into the roof of the snow cave to allow free airflow.

For extra reinforcement, consider building snow blocks to reinforce the entrance and walls of the cave. Building snow blocks is as simple as packing snow tightly together and gently rubbing the rough edges off. Place them outside in the cold for a time until they freeze and build your cave around them.

It should be noted that snow caves are often the only form of shelter you can build in arctic conditions, but they can also be extremely dangerous to live in for the time being. History has shown that they tend to collapse, so be aware of this while constructing your cave.

Survival is a nasty and gritty business, but in situations of life or death, it’s as simple as solving one problem and moving on to the next one; once you solve enough problems, you get to go home.

The only thing between life and death may be the shelter you build, so make sure you know what you’re doing and have a plan in the event that worse comes to worst and you find yourself tested.

Willpower and some wit will take you a long way in the wild.