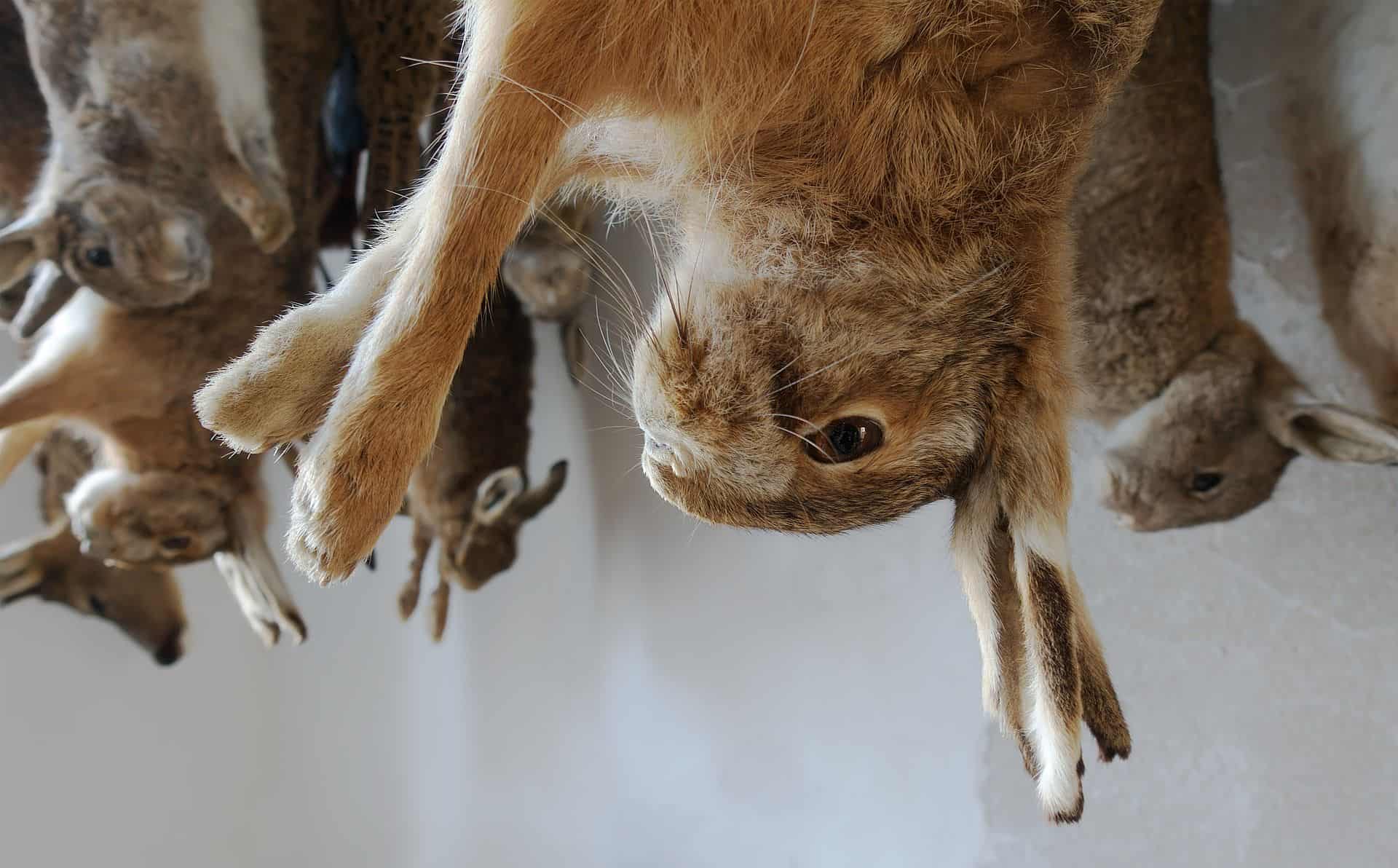 I remember back in 2007 the story about a National Park Service biologist working at the Grand Canyon that died after contracting the Black Death, also known as wildlife disease. If you like to go hunting or trapping is part of your survival skillset, you should take all the necessary precautions to avoid contacting wildlife disease.

The biologist, named Eric York, found a dead mountain lion, and that’s what settled his fate. In fact, the big cat was part of a study conducted in the park, and he was the one that trapped and fitted the animal with a radio collar to follow its movement. He was tracking the cat for more than two years, and one day, the collar didn’t show any signs of moving for 24 hours. York followed the signal and found the lifeless body of the mountain lion. He brought it back to his garage, where he performed an autopsy to determine the cause of death.

Contents hide
1 The Black Plague danger
2 The deadly culprits
2.1 The wildlife disease – plague
2.2 Tularemia
2.3 Other common diseases
3 Invading your body
4 How to stay safe
4.1 I’m not feeling well
4.2 Get involved and keep everyone safe
4.3 Good news for new hunters and trappers

Eight days later, York was found dead by his roommate, and following a rigorous investigation, it was discovered that he died of the plague, a disease that is easily transmitted through the bite of fleas. The same disease is also known as the Black Death or Black Plague, the one responsible for killing more than 100 million people in the 14th century, throughout Europe and Asia.

York’s death had a great impact on the professional wildlife community, and it created a tsunami in the hunting and trapping community. After all, if a biologist who can handle an animal following certain health protocols and handles only a few animals each year can contract the wildlife disease so easily, what about them?

What about those that handle dozens, and even hundreds of animals each year?

Most trappers and hunters handle carcasses on a daily basis, and they often come in direct contact with all sorts of body fluids. You can imagine why wildlife disease is a real and valid concern for them.

The wilderness harbors dozens of zoonotic diseases and parasites transmissible from animals to humans that can and will affect trappers and hunters.  The name of these parasites are well-known to hunters and trappers, but even the average Joe might have heard of them. Names such as trichinosis, echinococcus, tularemia, leptospirosis, and plague are to be remembered if you plan a hunting or a trapping trip in your near future.

The deadly bunch listed above live in, on, and around wild animals. Even animals appearing perfectly healthy carry them, and they can jump from those animals to humans with ease.

In certain cases, the diseases will result in nothing more than a case of flu-like symptoms accompanied by high fever, chills diarrhea, and other afflictions that will indispose a human.  Others, like Lyme disease, can have long-term effects and devastating effects.  Some diseases will kill a person if left untreated.

The plague is not as common as it was in the 14th century, and on average, it is estimated that 15 people are contracting it in America each year.  You may think that mountain lions are the main animals to stay away from, but even prairie dogs, bobcats, lynx have fleas carrying it. Even domestic cats that spend a lot of time in the outdoors can carry it.

Plague is almost entirely a Western disease, with the highest prevalence in New Mexico, Arizona, Colorado, and California. Only one case has been reported east of the Mississippi River since 1970, according to the Centers for Disease Control. Most other diseases know no political or geographic boundaries.

This disease is also known as rabbit fever and is the main concern for trappers. This is a waterborne disease, and it is most often associated with muskrats and beavers. The most aggressive form can be encountered in rabbits and big rodents, but hunters and trappers can also get it from other species as well. In most cases, you don’t even have to touch the infected animal to contract the disease. Touching any source of water harboring the disease is usually enough to get it.

Researchers in Texas found tularemia in feral hogs in 2011, prompting warnings for hunters and landowners who might come in contact with the animals. More than 100 cases of tularemia are reported each year, according to the CDC, and the disease has been found in every state except Hawaii.

Giardia is the most common wildlife disease, affecting thousands of hunters, trappers, and even hikers each year.  This intestinal parasite is picked up when a person drinks water were muskrats or beavers live. An experienced hunter and trapper have enough common sense not to drink water straight from a beaver pond, but not everyone is aware of this danger. However, even if you don’t drink from a beaver pond, you can get it through other ways.

Read next:  Decontamination and Sterilization of Water

The same goes for rabies, which is one of the most deadly diseases out there.  Often thought to be communicable only through the bite of a wild mammal, rabies can actually be transmitted through a variety of means. It is estimated that almost any mammal can carry rabies, and it can be transmitted in various ways.

Trappers and hunters know very well to stay away from the backside of a bobcat or coyote, but even so, some of them will occasionally let their guard down.

In most cases, a wildlife disease will find a way inside your body through open sores or through soft tissue like the one found in the mouth, eyes, or nose. Now, you may think that no sane trapper or hunter or lick, or put his or her face near the body of a freshly-skinned animal, but a wildlife disease will not always enter the human body through the front doors mentioned earlier. They can slip inside, through a small scratch and even a hangnail; they need something large enough to allow a microscopic cell to pass through. This puts things in perspective, doesn’t it?

You could, for example, touch an infected animal, and hours later, you could touch a piece of food and put it in your mouth. You could touch your face instinctively like all of us do tens of times each day. It doesn’t take much for a wildlife disease to find a way in.

For example, parasites like trichinosis will often enter through the mouth, typically if you eat undercooked game such as bear or rabbit. Trichinosis is in the roundworm family and can cause nausea, diarrhea, fever, and muscle pain. It can lead to death in the most extreme cases.

How to stay safe

Many experts from the CDC believe that cutting open an infected animal and breathing in airborne bacteria can lead to infection. In fact, this was the case for York, and even though such cases are rare, they do occur. Although I’ve rarely seen any trappers wearing a mask when skinning an animal, I do believe this is a safety measure that should be considered next time you handle your catch.

We can all take simple protective measures to prevent or at least minimize any risks. One of the easiest ways to fend off a wildlife disease and parasites is to wear gloves when handling your game. You should have a few pairs of rubber gloves in your hunting bag since they will come in handy. They are much easier to wash and sterilize than their leather counterparts. It takes a little getting used to handling game with such gloves, but you’ll get used to them.

As you can imagine, these are mandatory if you get in contact with saliva, blood, or any other bodily fluids when skinning an animal. One tip I can give you is to use heavy-duty rubber gloves similar to those used for washing dishes.  They can be a little more expensive, but they will not tear as easily as those disposable latex gloves.

They serve as a deterrent to parasites, but they will also keep bacteria from entering your skin through open sores, and even small scratches or blisters.

It’s a good idea to keep a bottle of waterless hand sanitizer in your truck. While these commercial hand sanitizers don’t kill all strains of bacteria, they will kill most of them.  It’s also smart to wash with soap and water, no matter what task you’ve been doing. Trappers will often handle some pretty smelly stuff, and soap and water will keep them clean, but also kill bacteria.

Not to mention that trappers use various lures and baits (like rotten meat or fish) that can also harbor various bacteria.  If you set a trap and bait it properly, then go to your favorite fast food on your way home, you may have a nasty surprise if you don’t clean yourself properly.

During the hunting and trapping season, if you feel ill, you need to pay attention to your condition. While most of us will catch a bug every now and then, sometimes it can be more than a common illness or the casual flu. This is why it becomes mandatory to see your doctor if you start feeling under the weather, and you suspect something isn’t right.
Insist that your doctor runs some additional tests and let him or her know about your casual encounter with animals and the handling of various furbearers.

In certain cases, it can take up to two weeks for the first symptoms to appear, so even if it has passed quite some time since you skinned that coyote, don’t assume your current illness might not be a wildlife disease.

Get involved and keep everyone safe

I advise you to call your state wildlife agency if you encounter an animal that looks ill or just doesn’t look right. Biologists can figure out what is going on with the animals in your area, but they do need a helping tip every once in a while. They will prevent dangerous trends from developing, and while they may not be able to stop a wildlife disease from spreading, they can at least warn trappers and hunters in said area.

This article may scare some folks out there, but that shouldn’t be the case. Most hunters and trappers out there have never gotten so much as a minor illness in their years of experience from the hundreds of animals they’ve handled. The risk of getting a wildlife disease is quite low.

Just take some common-sense steps to minimize your risk of getting a wildlife disease or parasite when you handle furbearers and you should be fine.

1 thought on “Wildlife Disease Avoidance Steps (A Must Read)”