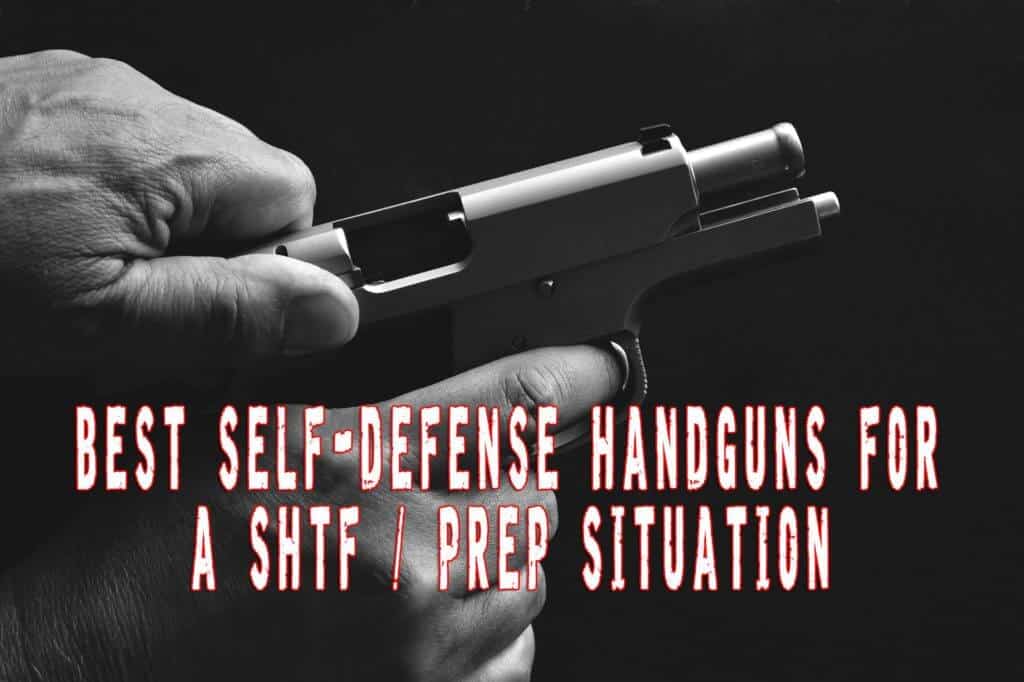 The handgun you should choose for a SHTF situation is a little different from the one you carry around everyday. Preppers have a few things to worry about that the average Joe doesn’t, because whichever handgun you choose for self-defense you want to make sure it will keep going long after civilisation collapses.

If you’re looking for a handgun for a SHTF situation, it’s worth pausing for a moment to think about what a handgun is actually for. It is possible, of course, to strap a huge scope on top of a 38 special, and go out hunting deer. However, if you are a Prepper you likely already have a hunting rifle for that. Why use a handgun, when you have a gun specially designed for hunting?

In truth, the primary purpose of a handgun in any survival situation is self defense. Against wild animals, sure, but also against your fellow man. Further, if you know a firefight is coming, you have time to get your assault rifle, so equally you shouldn’t expect a handgun to stand in for your main combat armament.

No, what you want to look for in a handgun for a SHTF situation is something you can carry around more-or-less comfortably, carry concealed in a variety of holsters, but also has huge stopping power. It should complement the rest of your armoury, not seek to replace it.

And this brings me to the most important factor in choosing a handgun for a survival situation – caliber. Of all the types of ammo out there, we can immediately disregard a few rounds as simply not powerful enough – whilst having a .22 rifle is useful for hunting small game, it’s not going to stop an assailant. On the other hand, a lot of very large caliber rounds, and notably the .357 Magnum, are already pretty scarce, and likely to be almost impossible to find after the SHTF.

What you’re looking for, therefore, is a handgun that takes a 9mm, .44 Magnum, or .45 ACP round. All of these bullets have enough stopping power, and are also common enough that you should have  no trouble finding them in a post-collapse world.

Contents hide
1 Suggested article: Choosing The Best Survival Gun For Your Prepping Plans
2 Glock 19
3 Smith and Wesson .40 M&P
3.1 Related article: 5 Guns Every Prepper Should Own
4 S&W 686 Magnum
4.1 The Gun You Already Have
4.1.1 Other Useful Resources:

The second major factor to consider in choosing a handgun for survival is the reliability of the gun, and the degree to which you can fix it yourself. In reality, this means going for a brand that has already built up a good reputation for build quality, and a gun that is common enough that you are going to be able to find spare parts for it.

Thankfully, it’s easy to find a handgun that satisfies all of these criteria, even if you live in a state with restrictive firearms laws. Let’s take a look at some good choices. A boring choice, I know, but the very fact that this gun is so common is actually a huge advantage in a SHTF situation. Spare parts, magazines, and ammunition is widely available, and the simplicity of the design here means that the gun is easy to fix yourself.

Though I don’t particularly like the look or feel of this gun, I’ll admit that it also has a good reputation for reliability, and is actually pretty accurate. I’ve chosen the Glock 19, though the 17 is also a good choice, because I think it is the perfect size – just about small enough to conceal if you need to, but also large enough to keep going for years and give you a decent chance of hitting something.

I know this is the go-to gun for a lot of Preppers, and it’s pretty easy to see why. The extra stopping power this gun gives you over a 9mm could come in very useful, whilst not appreciably increasing the level of recoil you feel.

In addition, the original .40 M&P is remarkably light for such a powerful gun, meaning that you can carry it almost everywhere. In a survival situation, you are most likely to be attacked when you least expect it, and so you need a gun that can stay on you at all times.

And of course, though this gun achieves impressive accuracy with a bit of practice, having 15 rounds in the magazine means you can miss a few times and not worry too much.

Related article: 5 Guns Every Prepper Should Own

I know, I know, I said above that I wouldn’t recommend a .357 Magnum. But, if you already have one of the guns above, getting this classic might not be a bad choice. Though ammunition for it might run out pretty quickly, it will stop almost anything with one bullet, so as long as you use it sparingly it’s a great gun to have around.

The Gun You Already Have

Ultimately, effective use of a firearm is more about familiarity and practice than about having the latest features. Though it can be tempting to buy a new gun specially for SHTF situations, a gun is no better than the person shooting it.

So if you have a reasonably powerful, fairly common pistol already, you already have a good gun for when the SHTF, as long as you know how to use it.

Article written by Sam Bocetta for Prepper’s Will.